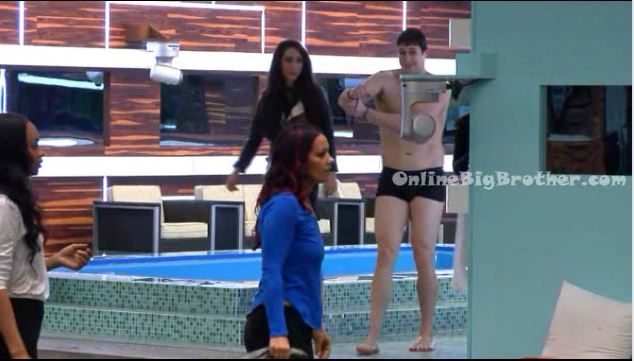 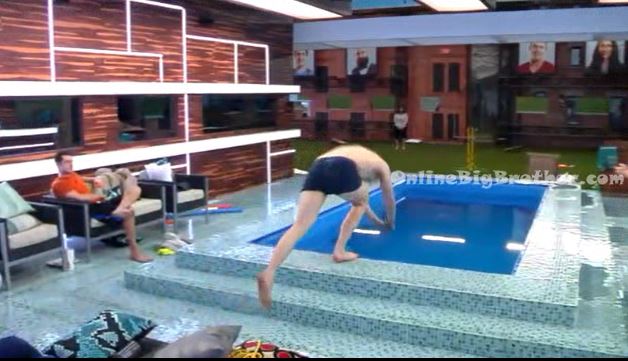 Want to watch the BBCAN live feeds? Bypass the geoblocking with HideMyAss VPN and be Canadian Anywhere:

4:10pm The house guests are put on a backyard lock down. All of the house guests head out into the backyard until the lock down is over. Jon strips down to his boxers and jumps in the pool. He’s jumping in forwards and backwards. Jon ends up popping his shoulder out and screams in pain. The girls freak out and Sabrina runs the backyard door which is locked and starts banging on it and screaming for the doctor. The girls are really freaking out and screaming and yelling for Big Brother to send in a doctor. Neda walks with Jon from the pool to the backyard and he starts to try and pop his shoulder back in. They tell him not to try and pop it in himself. Arlie runs across the backyard to tell the other house guests in the hot tub room. Big Brother then cuts the feeds.

When the live feeds return after Jon popped out his shoulder, the other house guests are sitting around the backyard. Arlie seems concerned whether or not he will be okay. The others tell him that Jon will be fine.
)

4:30pm – 4:45pm Out in the hot tub room Paul and Adels start arguing and yelling back and forth at each other. They’re arguing about Adel calling Paul out about not cleaning or cooking. Paul says that even though we b***h and fight like this, I would never throw you under the bus. Kyle tells them to talk one at a time to get their points across. Paul says I can cook for myself. That’s okay! I’m okay with that! Paul tells Adel that he keeps attacking his character. Kyle tries to get them to stop and for them to calm down. Paul tells Adel that you and I both know that its a 50/50 split between you or I being here next week. Kyle says dude we’re Black Sheep, Black Ball, Black Everything! 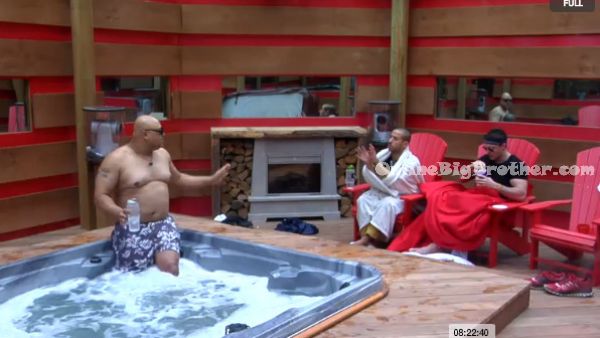 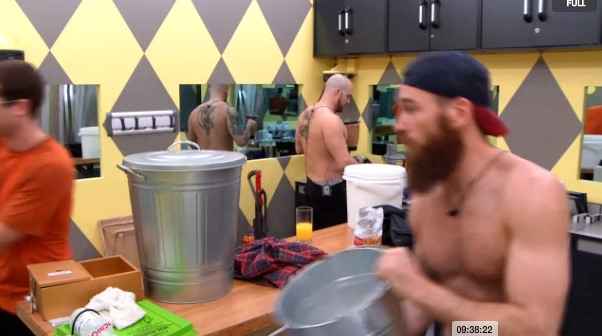 5:30pm The Live Feeds are turned back on and the house guests are eating and working out. Andrew, Kenny and Arlie find a bunch of stuff (keys for the cupboards in the storage room, Kitty litter in a bucket which they pour into a zip lock bag.)and start hiding it from the others. The look for the mug that was planted in the house the other day and realize that someone else hid it under the cupboards. The guys take it the mug from where it was hidden and hide in in their own hiding spot.

6pm Andrew,, Kenny, Heather, Neda, Rachelle all head out to the hot tub room. Kenny comments on how JON said that he’s popped his shoulder out several times before and that this time was the least painful time it ever happened. Big Brother tells them not to talk about production. 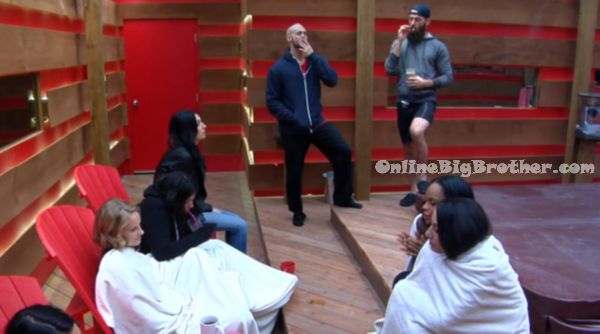 6:35pm – 6:50pmSarah and Andrew join Kenny by the pool. Kenny tells them that he went up to the HOH room to take a poo and Sabrina was up there listening to music. He says when he came back out of the bathroom she was dancing like crazy. He says he stood there for a bit watching until she noticed he was watching and freaked out. Sarah heads inside. Andrew, Heather and Kenny talk about how whoever wins HOH has to put up Paul. Kenny says I would just die if I left before someone like Paul. Heather and Andrew agree.
) 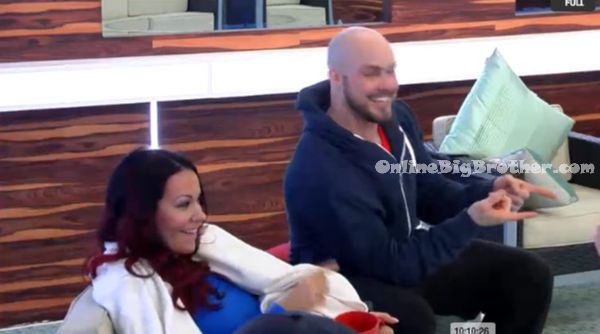 7:15pm Sabrina showing Rachelle how to pop in-grown hairs on cams 3-4. Ika keeps talking about how much she hates Heather and how she looks like Chucky’s Bride. The other cams 1,2,5 are blocked. Ika tells the girls how she found Kenny below the stairs by the bathroom and she thinks he was trying to listen in on their conversations before so she tells them to be careful. 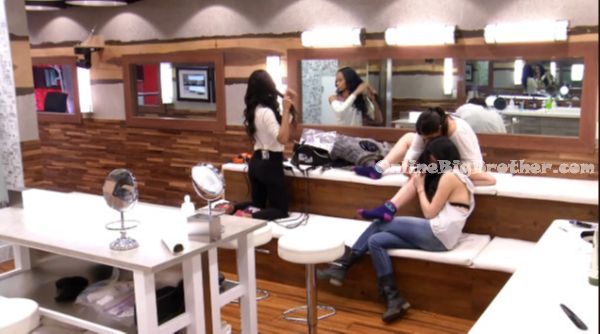 Lol. Well, at least something happened today… The only problem is the feeds are down- as usual >:(
The feeds for this season blows.

Andrew is really starting to get on my nerves…a lot..a whole lot. He is so cocky I dislike how he thinks his alliance has it in the bag next week.. He said : “Ika’s next..let’s put her and Paul up—just fuck with her and scare the shit out of her”

Ummmm Andrew…knock knock…what if someone that’s not in your alliance wins. Like i don’t know ..Neda? or Adel? OH OH how about Ika?. He rarely thinks of scenarios that are unfavourable to him. This will be his downfall that and the fact that he took the leadership position in his alliance.

In fact I can’t wait until the “first five” and “the girls alliance” fracture…I’m ready to see people realign. And I just can’t with Sabrina….I can’t her voice annoys me…and I hope her and her big mouth get the boot soon.

this week has been jammed packed. My favorite part about Jon dislocating his shouler (which is terrible and there is only a good part because according to the HG they were told he’d be fine) is the fact that the girls are talking about waxing Sabrina’s crotch while it happened. If they show it on Thursday Im praying they air part of that conversation

If you want to watch the feeds and the GEO blocking has you blocked out give Strong VPN a try. I’ve been using it personally for years.

StrongVPN.com
StrongVPN.com offers you a solution to all your privacy concerns with any internet connection.

Is BB Canada coming on tonight? I am in America and still a little unsure of the air dates. 🙂

The episodes are on Wednesday, Thursday and Sunday night … with the eviction episode being on the Thursday night.

Has anyone noticed that all of Paul’s sexual references are all homosexual? He makes it like he is joking and says I will make love to you dude or eat my nuts. What bothers me about him is his overuse of “dude”. Rachelle stares in the mirror and plays with her hair. Sabrina pretends to be everyone’s best friend.. It looks like she is trying to hook up with Andrew. Most likely will start disliking Heather and Rachelle because Andrew flirts with them too. I hope they let Alision and Scott into the house to really shakes things up. Kenny , Jon, Alison , Scott and Adel would be a good alliance. Andrew talks about himself constantly. I get so bored when he lists all the foods he eats. Hi Simon and Dawg!!!! Great job on the updates as usual.

I can’t believe how much burping, farting and nose picking is going on…gross! It’s turning into the Mean Girls vs the Beastie Boys vs the Three Stooges

I loathe Sabrina… my god. she just needs validation from everyone.. telling the same story about Adel calling her names on TV…

I had hope for Ika but I’m now sure we have a full house of bitches.

Can someone explain to me how Adel all of a sudden became a target? Was he guilty be association or is he a douche? Sorry, had midterms and just trying to catch up and get my bb fix!!!!

Adel pissed a lot of the girls off in the first week. Now he’s not in the “in Crowd”

A bit of both, really.

Though i hope he sticks around – if only to make Sabrina nuts. She gets on my nerves too. She and Ika – who is scheming way too much.

And Andrew – who as Leslie said, is just too full of himself.

Sabrina called Adel gay and also said something about his religion and he called her a cow.

What did she say about his religion? And is he gay? I watched a clip of him saying that he will punch whoever brings up his sexuality and religion or w/e

Yeah, I am wondering about the whole Adel/sexuality thing, too. I wonder what he meant by that on the feeds.

So the targets are Adel, Paul, and the girls hate Heather. I am curious who will be on the outs once the easy targets are gone.

The thing I find hilarious about Sabrina and Sarah is that they feel they actually have a chance at being F2 with this stupid alliance they have with Andrew Kenny and the other one when they are obviously going to be 4th and 5th in their little alliance. Kenny is trying to push away anyone from being too close with Andrew. Andrew has HOH-itis and made himself designated leader of the house. Sabrina’s slowly becoming unhinged. She’s spearheaded a hate campaign against Heather, who’s only crime is speaking in that annoying baby voice. I honestly hope that whoever comes out of the war room will shake things up before the house becomes too lopsided.

Ok you need a little BB help. Last things 1st. The leader of the “I hate Heather crowd” is Rachelle. Everyone else just piled on for the fun. Rachelle, Ika and Neda seem to spend the most time talking about it. Brina is just running 4th at the moment. And others have stated it’s the Andrew thing that has Heather on the radar and that annoying voice. Heather has one other major flaw. She gets told a “secret” she immediately starts running into doors and walls trying to find anyone to tell the story to. She has no strategy/game and doesn’t know how to “float”. She is a known commodity by those that matter in the house. She’ll be an alternate eviction vote for a few weeks but wont get targeted until Paul and Adel gone. Might say in passing it’s 50/50 IMHO Ika hits the door before Heather does.

As for the peaking order in 1st 5 alliance you couldn’t be much more wrong. 5) Arlie- been made clear he is expendable and simply a vote by Andrew, Kenny and Brina. 4) Sarah- I wrote today I think she is/has shout down on game and is along for the ride. Hopefully she turns on the go button again. 2/3) A few days ago I’d of had Brina 3rd and Kenny 2nd. Looks like Brina might be getting close enough to Andrew to justify the 2 spot next to pimp Andrew! 1) Andrew- Feared( no idea why so early), a bit of a bully(it will get worse), the king of nose pickers(disgusting), not much for original thought(backdoor Kyle Kenny’s idea, the true puppeteer at the moment) and now he’s gonna go into a showmance potentially with Brina? I never saw those 2 hooking up day 1 for sure.

This is early. 3 Stoogez v. “BeastieBoyz” v. MeanGirlz as in a 3-way WWF elimination contest? Coooooooool! Even Nate could be a game changer but

i feel the “smart” money is on Allison or Scott to make waves! I’m not gettin’ those live feeds so i don’t know how gross or badly spoken they are being.

The triumvirate of Spencer, Amanda and Aaryn brought BBs15*u$a to a new low last fall, BB*C is sorta being sedate and trite by comparison! I really

feel sorry for Jon, he’s not a bad person, but this may impact his game in light of how he wuz with a basket of potatoes. Neda like owes Kenny big time?