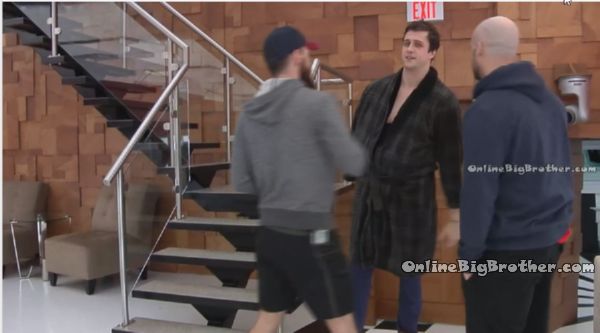 Check out the OBB Boardz https://forum.onlinebigbrother.com/ 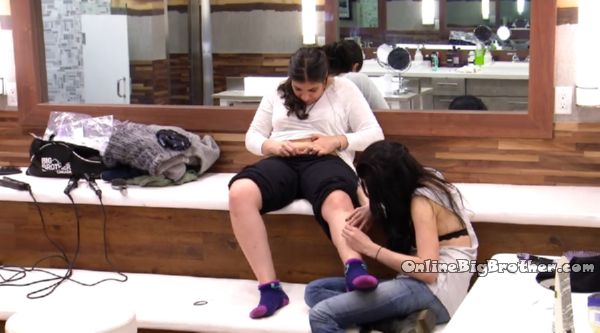 7:40pm Sabrina and Rachelle both of the girls trying to remove Sabrina’s belly and knee hair.

Sabrina says she’s telling guys that she doesn’t trust IKA she wants to make sure her and Rachelle are on the same page.
Sabrina – “I don’t want her in the jury house’
Racehlle says she really trusts Sabrina ands Sarah. She adds that she doesn’t really care about anyone else but those two.
Sabrina – “Ya Sarah’s really nice”
Sabrina – I hate when she (IKA) comes and has these grand ideas.. No offense but I’m much better at this than she is… don’t tell me what to do and what to say.. Like everything I said has happened like relax.. Everyone f*** likes me.. I wasn’t put up on the block so like whatever”

IKA join them.. the start making fun of Heather’s voice.. etc.. (LOL when this girls alliance pops it’s going to be epic fun) 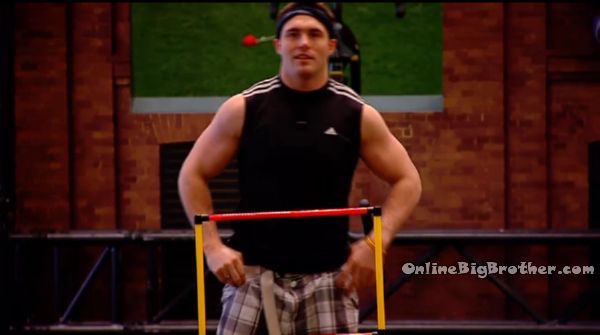 8:00pm Kyle, Adel and Paul are fooling around 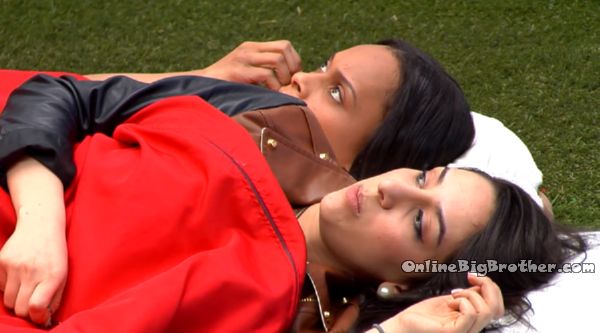 8:04pm IKA and Neda
Talking about Sabrina being in such a good position.
IKA says she’s scared that the boys are really strong.
Neda says that Kenny and Andrew are both very physical and mental.
Neda and IKA are worried about Arlie in the competitions both think he’ll be a beast.
IKA – why did they choose such athletic guys and no athletic girls..

They notice Arlie, Kenny and Andrew going to the hot tub to smoke.
IKA – ‘look at that Arlie doesn’t even smoke’
Neda – ‘theres a 4 boy alliance going on”
IKA says they knew that already.
IKA – ‘I wish the floaters like Adel and paul were better players.. cause if Adel won it would be smarter for him to go after the boys but he’ll go after the girls.

Neda – I wish Andrew was going after Paul this week cause Kyle is the only one not afraid of going after Andrew.

Neda – the power has gone to his head.. it’s like him and Kenny think they are running the house
IKA – I wish paul was more trustworthy
Neda – do you think if paul won he would put up ANdrew
IKA – ya, I hear him in the pantry talking to himself.
They think if Paul wins HOH he’ll put up IKA and Andrew or Andrew and Rachelle
NEDA – do we have the votes to evict Andrew?
IKA – no creepzilla would vote to keep Andrew.
They realize that Heather and Sabrina will not vote out Andrew. This worries them as it places IKA in danger.

NEDA thinks if they can get Paul to put up Adel and Andrew it would be perfect.

IKA – Arlie creeps me out..
NEDA – I Think Arlie will do whatever it takes to win the game.
IKA – MAybe Arlie and creepzilla are related
NEda starts laughing
IKA – I prefer Anick over Creepzilla
IKA points out that all the guys liked anick especially Kenny. They agree getting rid of her early was a good idea.

IKa says that Arlie freaks out on Big Brother (Production) she cannot believe he does that. (Yells and such) 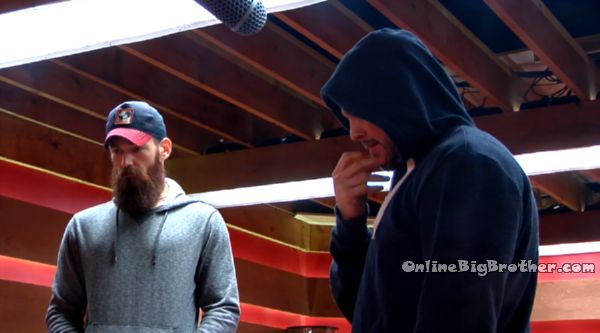 They are calling themselves chillville.

Kenny says that they shouldn’t feel too comfortable because if the girls win a HOH and pull Adel/Paul in they can do some damage and make a big move.

Sarah says the ring leader for making a big move is IKA. Sarah asks them who will the put up.
Kenny and Andrew answer together “Ika and Heather”
Kenny – I think it should be maybe IKA and Paul and we’ll leave the option to Backdoor”

Kenny saying that HEather is watching him like a hawk.

Andrew thinks they need to take out Paul followed by a girl. They should leave Adel in the game cause he has no strategy.

Andrew says he’s going to buddy up with Adel again, “Even though we’re the same age I find Adel very impressionable he’s too much of a loose cannon i can bring him in as a bro.. get him in on the guys side”

Sarah says they are in a good position they are both in on the “Side” alliances and they are not exposed.

Jon comes back.. his arm is in a sling. 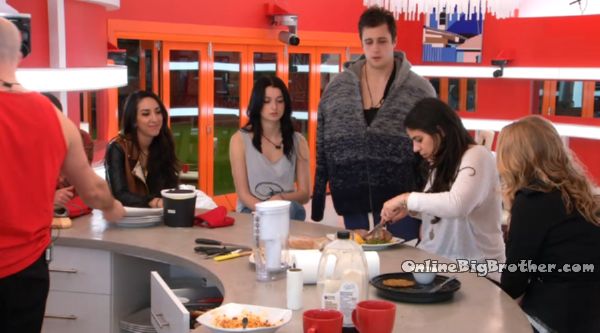 Sabrina cuts Jon’s porkchop for him. Sabrina (I think it was Sabrina) says she can’t eat pork because she’s jewish. 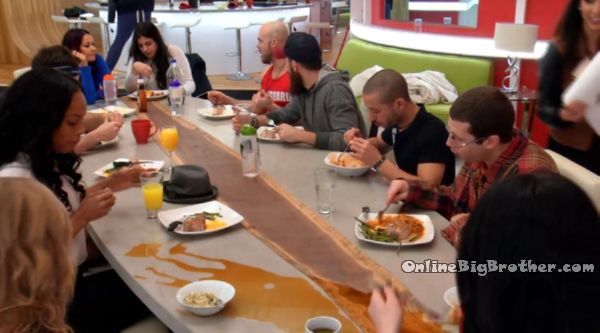 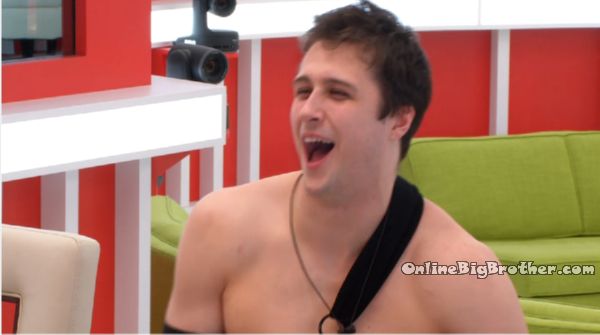 I just don’t get it!

The men are fully aware that the women absolutely can’t stand Heather but unbelievably they don’t tell Heather this information to get her on side with them. Why?They are also bizarrely considering putting her up as a replacement nominate in the next two weeks. This makes no sense. Tell her and she will immediately want to vote with you stupid guys. I’ve never come across such stupidity. The men are friggin idiots.

The men want Heather gone as much as the girls do.

To be fair to the hgs Heather is annoying, her baby voice, she come into rooms and saids are you happy, etc it just comes off as fake and annoying
she has spread conversations around in bb you do have keep some things to yourself so she shown she can’t be trusted.

Johhny (the European one!)
Reply to  AntonyG

The ONE THING they all know for a fact about Heather is that she ALWAYS tells EVERYBODY EVERYTHING.
So if they told her the girls don’t like her, she’d immediately go and ask EVERY SINGLE GIRL “hey, Andrew just told me flat out that you don’t like me. Is that true?”
So creating a flat out $hitstorm war with the ladies in the hope of getting Heather’s 1 vote (really her only value in this game so far) would actually be the friggin idiotic thing to do at this point in the game.
Luckily those guys are a bit smarter than that.
“Tell her and she will immediately want to vote with you stupid guys. I’ve never come across such stupidity. The men are friggin idiots.” LOL. Sorry, but it’s often the most clueless ones who bark the loudest.

AntonyG
Reply to  Johhny (the European one!)

Why does Sabrina all of a sudden want Ika out ?
I don’t get it, with the exception of Sarah, Sabrina tells Ika a lot like a lot more than she tells Neda or Rachelle. If you want her gone why do you give her an abundance of correct information.

Maybe she has diarrhea of the mouth? lmao

You ask why Brina talks to Ika so much. She is moving Ika closer to the door. In the last week Ika has gone from no threat to now not being on the jury if Brina has her way. Brina has Andrew and Kenny nodding their heads like good little sheep. Brina is queen sh*t disturber and Ika is a distant second. Brina’s talks are designed to bury Ika deeper in a hole with the HG’s. Only the 15 HG may change house dynamics otherwise Ika needs an HOH win at some point just to know who her true allies are.

As for Brina weather you like her or not everything she does and says has a purpose right now. It can all change but at this point her game is the best in the house. She’s got social game, a strong sense and usage of triangulation and in an alliance that’s running the show early. The more Ika tries to push people off Brina the closer she gets herself to the door IMHO.

PAUL HAS THIS GAME WON HANDS DOWN! PAUL IS A GENUAS, LIKE DR. WILL.

Paul, Kyle, and Adel need to be coaches for BBCAN 3!!

The girls alliance supposedly has 6 people right? (Heather, Ika, Rachelle, Sabrina, Sarah, Neda) They could probably sway Adel to their side too, so why don’t they try and evict Paul instead of kyle? I mean Sabrina and Sarah are more loyal to first 5, but in theroy they have the numbers to do it so why are they just giving up? It bugs me when people play this way. Like Im fine with unanimous votes b/c its smarter as a game move to vote with the majority, but Im not fine with no one trying to swing any votes for the person they want to stay. Like if you fail and don’t get the votes then I don’t care if you vote for the eprson you know is leaving, but if there is even a chance why would you not go for it?

Oh Oh – Sabrina has the hots for Kenny – watch her conversation with sarah. Poor Kenny!!

Didn’t she love Andrew yesterday? I smell a whore.