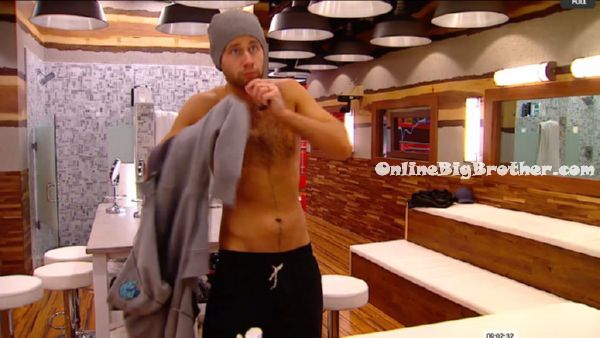 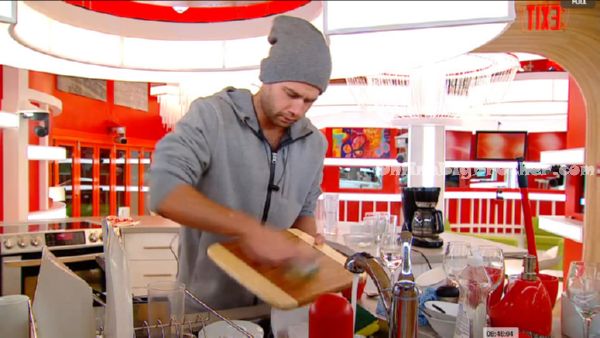 6:45am – 7:50am Arlie is the only house guest awake. He’s in the kitchen doing the dishes. He then heads to the diary room, presses the button and gets let in. When he emerges again he is holding a dish. He returns to doing the dishes. He heads to the bathroom. When he comes out he washes his hands and says “Day eight baby! DAY EIGHT!” “Life is so good! Life is so good!” “You got this, you got this!” He then heads back downstairs to the storage room and grabs bagels and cream cheese for breakfast. 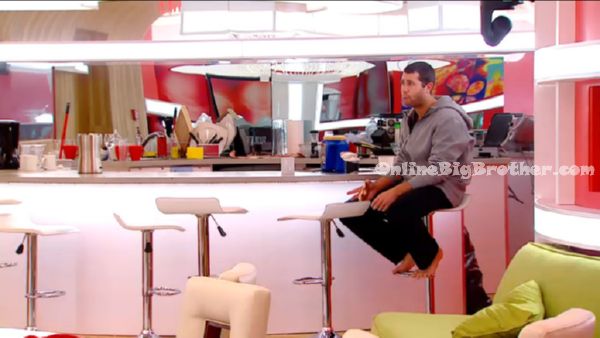 8:20am Arlie finally finishes doing the dishes and heads upstairs to the bathroom. Adel was up for a second said good morning to Arlie and then went back to bed. Arlie checks all the drawers in the bathroom and finds two that are fake. He says to himself 17 drawers, two are fake. Up in the HOH room – Paul is awake. He joins Arlie and Arlie explains how he “crushed out the dishes”. They head into the storage room. Arlie talks to Paul about how he made a connection with Sabrina. Arlie says that he will water that and let it grow. Arlie says that he is scared of the girls and thinks the other guys are too. Paul and Arlie think the girls are working together because they aren’t talking to them about strategy. Paul tells Arlie to fight for the HOH tonight. Arlie says that he will. Arlie tells Paul that he knows for a fact that Paul won’t go up if Andrew wins HOH. 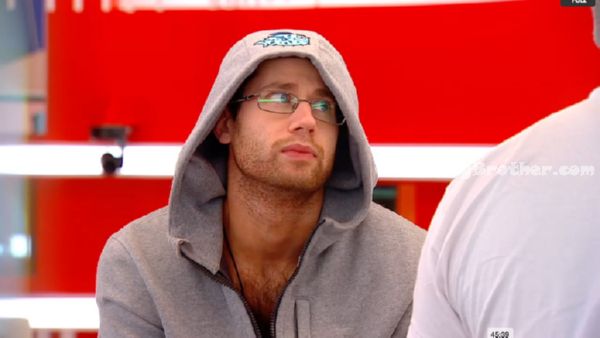 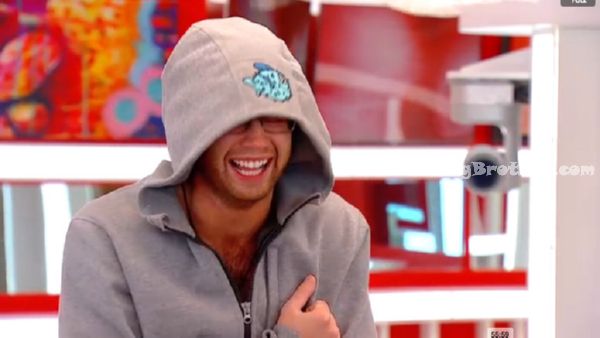 9:20am – 9:45am Big Brother tells the house guests its time to get up for the day. All of the house guests are slowly waking up. In the kitchen, – Kenny, Sarah and Paul discuss how it will be a busy day being an eviction day.

9:50am – 10:20amBig Brother gives Sabrina several warning to wake up and then finally tell her that if she doesn’t she will face the consequences. She then gets up and starts digging for gold. Neda, Ika and Sabrina talk about how Paul and Andrew were called in to the diary room right after each other making it obvious they have it out for each other. They talk about how they think the target next week will be Paul so that the girls will be okay. Jon joins them and Sabrina talks about how Adel told her he was going to crush her in the competition and put her up. Sabrina tells them to not say anything because she doesn’t want to be more on Adels mind. She says don’t say anything unless he wins HOH. Sabrina says she is going to try and win HOH to make Adel scream like a little pig. 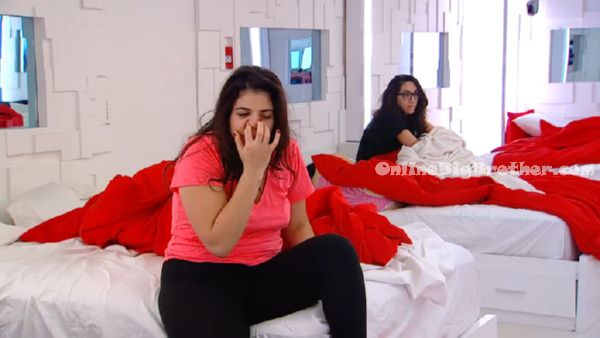 “They talk about how Jon pleasured himself while others were around. Paul says that Sabrina said Jon looked at her while he was doing it and she felt violated.”
I wonder, if this was BB US, would there be millions of “concerned citizens” creating an online storm, and he’d lose his job… (err… as a student… or somewhere playing hockey?)
Oh well, it’s BB CA, so I guess we’ll all just say “eww, that’s disgusting!” and get on with our lives 😉

arlie is cute when he’s not talking and seems really compasionate. i hope he learns to shut up and can stay longer since he’s such a big fan.

So what does everyone think about the 3 people vying to be the final house guest? I like Allison. I loved when she said if they don’t like me they can “suck it”. that makes me like her more. Hopefully she will be the one picked.

As for the other houseguests I haven’t had a chance to get to know them yet but I already know I don’t like Paul. Heather’s and Anick’s voice will drive me crazy if they are here much longer. I also liked Rachelle’s story about her brother. Will have to see if I like her or not.

Johhny (the European one!)
Reply to  Rocky

Honestly, when I saw those 3, I thought BBCA had chosen 2 pretty “average, boring” people on purpose to put next to the drag queen so that it’s obvious who will be chosen.
I also liked the feisty remark she made, but I really don’t see any other outcome than “Gary 2.0” winning. I’d love to be proven wrong though!

Rocky
Reply to  Johhny (the European one!)

Oh god I hope not. I couldn’t stand Gary last year and really don’t want to see it again.

KENNY FOR THE WIN !

Paul is insane and is getting on my nerves already. He reminds me of Suzette from last season..I liked her though.

Haha oh my god, I’m glad I’m not te only one who thinks Paul is so similar to Suzette !

Hey Simon, who are the POV players of BB2 Canada?