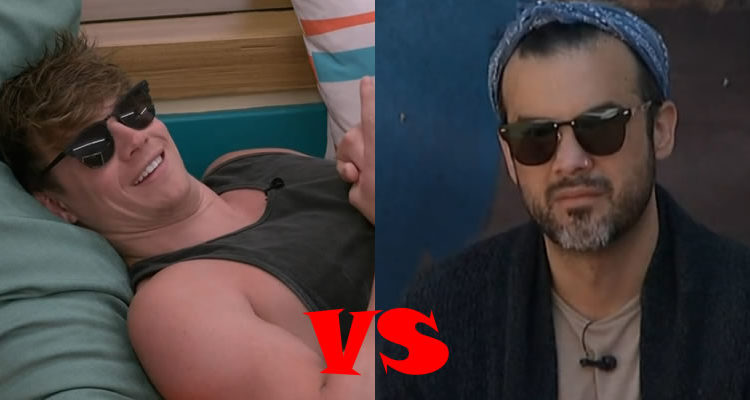 Week five wasn’t the most exciting but it did offer us some interesting tidbits. The leftovers can crack at any minute. All we need is the right mix of Head of Household and Veto wins. We now have one full-blown showmance and one fauxmance. After so many weeks of Leftover dominance, we need a shake-up to avoid suck.

Michael won the Head of Household and nominated Terrance, Monte, and Joe. The plan with the leftovers was to get the veto played and to evict Daniel. However, if Daniel won the veto Monte would have been in serious danger. As luck would have it Daniel and Kyle were not selected to play in the veto. Michael and Brittany go on to win the Power of Veto. Micheal now has won 5 competitions. The entire non-leftovers side of the house pressured Michael to not use the veto saying this is a perfect time to get out a very strong player in the game. Michael stays true to the leftovers and uses the veto to nominate Kyle and Daniel. The target is Daniel of course. At this point the campaigning is light. Daniel accepts he’s going to be sent packing so proceeds to warn Alyssa, Terrance, and their ilk of the 7 persona alliance in the house. Lists the members of the leftovers.

Tonight Daniel will be evicted and the festie bestie The Head of Household competition will be THE WALL endurance and we’re being told it is on the feeds. Subscribe here for a free trial Paramount+ 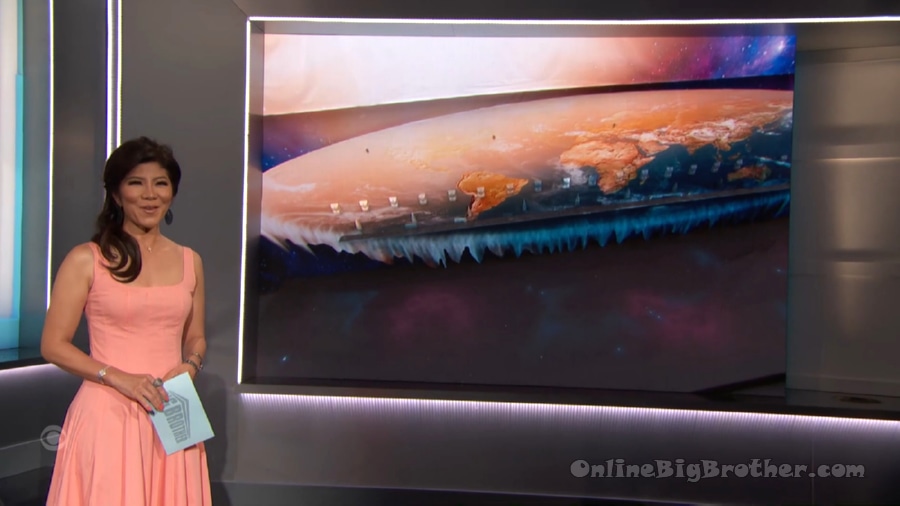 Daniel calls them all clowns. Reminds them Michael has won 5 competitions says a super fan of big brother doesn’t miss an opportunity to take out Monte it’s obvious they re working together. 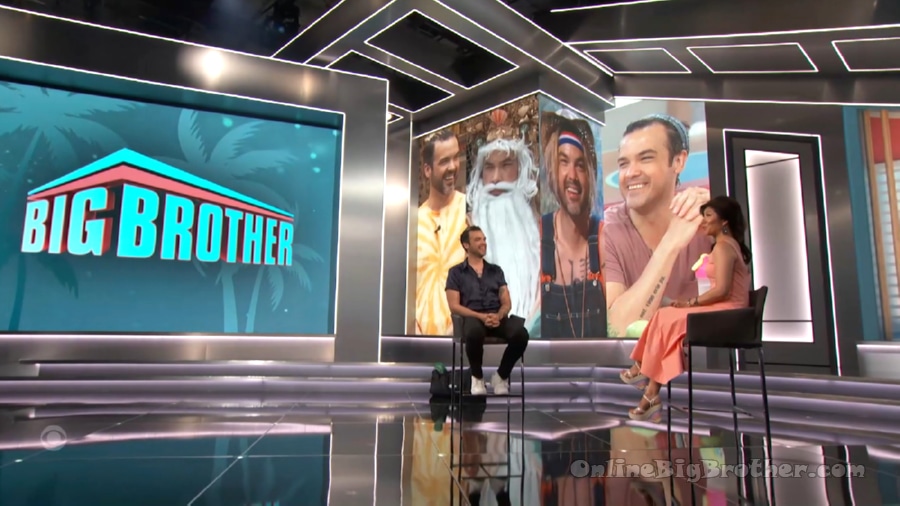 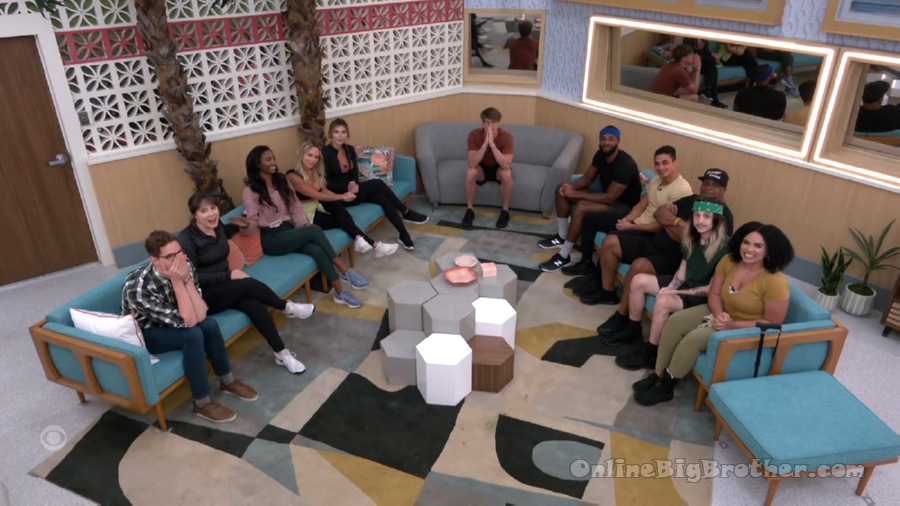 Julie tells them the festie bestie twist is over.
Julie – You have all now at least made it to Jury.
Julie – tonight another Big BNrother classic awaits 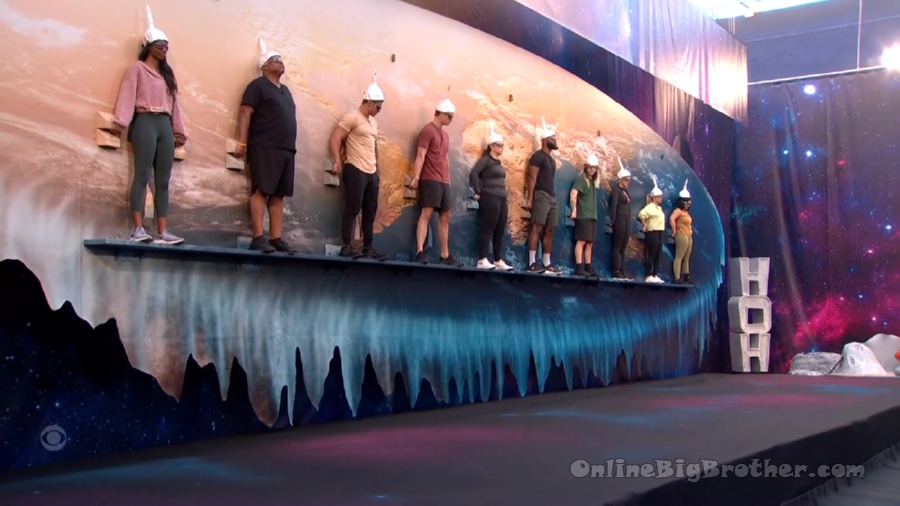 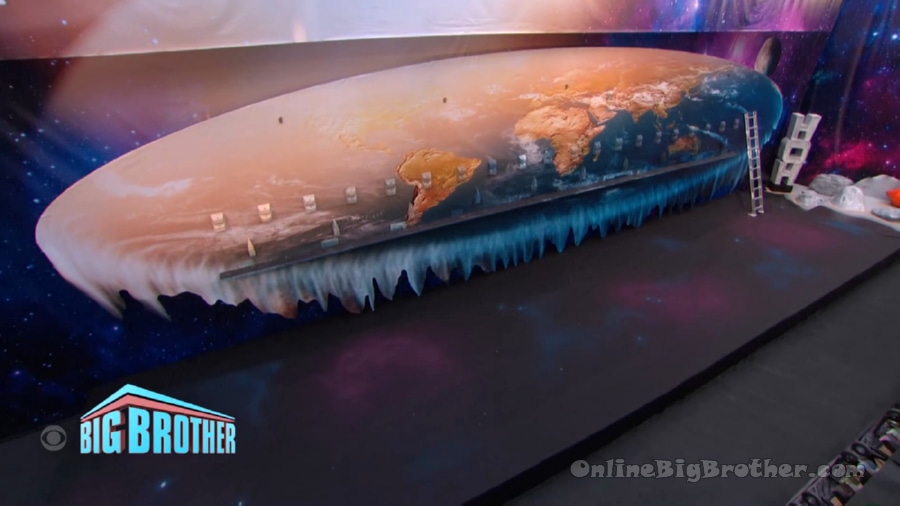 Catch the comp on teh feeds.. 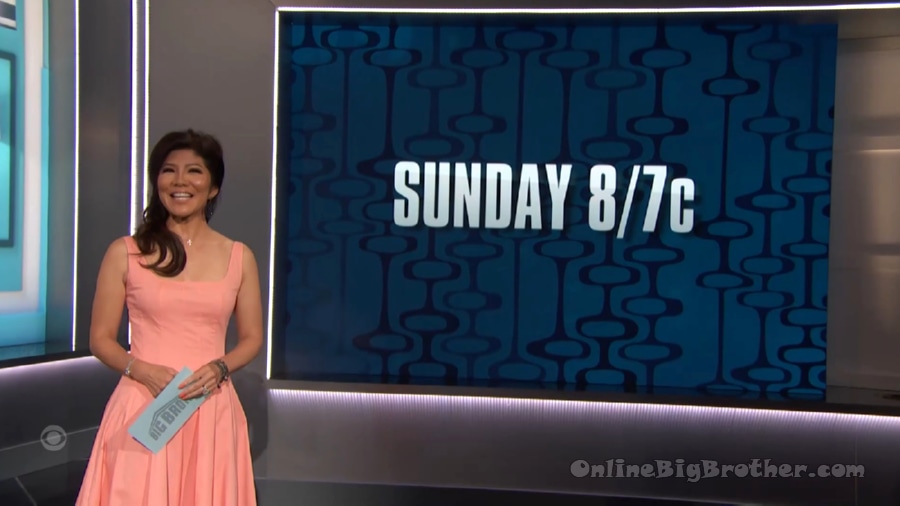 daniel is so bad at this game it’s cringy. he keeps thinking people could work with him when he’s shown everyone he has no loyalty whatsoever and is way too much of a wild card to even entertain such an idea.

He’s the worst. The worst player is always the one that thinks he’s amazing at strategy and being a “puppet-master.” The one that talks big game but accomplishes sh!t.

Who did sent Nicole home again, Daniel? Oh, the person that used the veto. LOL!

Oh I do remember Raven eating her butt scabs on the live feeds.

A complete joke… forever remembered as an idiot.

“I’ll let you in on another secret”…Are they not being told right away that the twist is over or is another twist involving the upcoming DE coming up?

I figure she will tell them after Daniels eviction interview, right before the HOH.

That confused me too. ANOTHER secret implies that there’s more besides the end of festive besties.

Ooooookkkkaaayyyy….That was an interesting speech

First off: Daniel comparing himself to Dan Gheesling is just LMFAO.

Now, off to more interesting things…

Terrence played this badly… he should have visited Michael asking him BEFORE VETO if he wanted him to throw the veto just so Michael had all the power. He’d have scored some points with Michael and perhaps have found an ally or showed Michael he was willing to play this with him. He should then have Daniel pitch the “send Monte away plan” as if it was Daniel’s plan/idea and tell Daniel to not let Michael know he was all up for it since Monte kept him safe when he was on the block with Ameerah. Daniel could have then said he could convince Terrence to vote for him along with the girls to send Monte away. But now Terrence has been exposed to his “festies” and the whole alliance. I think Michael winning a lot of comps is putting himself in danger in a way, so sending Monte away would be a good thing… but now it’s too late.

P.S.- It’s not even fun to watch the show and know who’s leaving just by the way they’re dressed.

P.S.S- Daniel is really low with that eviction speech.

Fun fact: He and Daniel were talking about saying something to Michael and at that point is when the feeds went down for the POV competition

there was a way to pitch michael to vote out monte. bombarding him in a way that looked like an alliance had formed was not it.

ideally you want to make it seem like it’s michael’s idea. you stroke his ego that he’s a comp beast and that monte will be a threat. then you say you think you can get the votes and suggest that he approaches indy, jasmine, terrance, alyssa, and kyle (maybe even throw joe in there). point is make michael go to those people instead of having those people come to michael. try to make it feel like michael and brittany are forming a new alliance. but of course this wouldn’t work because michael has no reason to talk to those people because of how badly most of them, particularly daniel have played. it’s pretty important to get people to like you, daniel, to pull off strategies like this. that’s where dan gheesling worked, dan’s funeral was all about kissing ass and making people feel sorry for him. being spiteful and mopey is not that.

now let’s get Jaba out

Daniel… such a disappointment….

Did Daniel win a veto and hoh this season or was it just veto? I can’t remember.

He won the very first HOH of the season and put Michael up. It was when he said there could only be one Superfan in the house in the DR (in ref to him and Michael).

He won the first HOH.

glad this sore loser is long gone. such a bad player.

It makes Daniel happy when people get together to right wrongs… that he committed. LMFAO!

The goodbye messages were savage. Michael’s the best.

He’s lucky some positive messages were thrown in there.

Ok, depending on what Julie says the twist is, who people want for HoH might change

Simon or Dawg I will need help deciphering the twist….

Somehow they are going to split the house into two groups with HOH’s and everything. one person from each group will be evicted. Not sure how they will accomplish this logistically.

What a dangerous week for Michael and for the leftovers alliance… a house divided in two could mean… mess.

Eviction Episode:
Elvis has left the Building
Preamble:
Monday to Thursday on feeds was not about Eviction at all. It was about future plotting.
RECAP
Festie Besties and Leftovers.
Backdoor plan to get Daniel. Michael considers the alliance breaker move.
Michael wins veto… again. Terrance clowns to save Daniel.
The push to evict Monte caused Michael to doubt.
JURY Begins after this eviction.
One side was in the dark until now… conveniently after 4 d/r calls.
POST VETO CEREMONY D/R
Michael chooses to stay with Leftovers.
Daniel thinks it’s the big mistake.
Taylor can’t wait to vote him out.
Terrance wants Kyle out.
Daniel: I’m not going to throw you under the bus….. waitforit.
D/R: i’m throwing him under the bus he’s in the alliance.
Turner: let’s hope for a unanimous vote.
Jasmine thinks there’s something up. Jamsine’s wheels are turning… no. the scooter is gone…. there are no wheels.
CIDERGATE Filler
Alyssa… is a messy cheap drunk.
Indy is on the case (reality… Indy was hoping to hide it from Daniel for HERSELF and someone scooped her).
a crimewave?
CiderHider is safe with the MuffinMurderer.
The Kyle D/R sponsored camtalk followed by actual D/R. How to save Alyssa.
Alyssa is tired of the stop go of the junior high mance.
Daniel blahblahblah they’re all afraid. He’ll shield? Um. Actual players talk… because they didn’t do things HIS way when he was the biggest pushover HOH this season.
JULIE SILLY TALKS
Brass tacks: Daniel’s campaigning was at the behest and feeding of D/R visits. Roll back the week and look.
CAMPAIGNING CLOWNS CLOWN
Daniel targets ALyssa’s vote.

Daniel thinks he’s going to be a legend and Jasmine is being Jasmidiot.
Daniel is a loving friend to Alyssa… who stares at her creepy.
Alyssa is wondering if Daniel is telling the truth.
NOT SHOWING KYLE TALKS TO ALYSSA
Daniel thinks he’s logical to Joseph.
Joseph (who has been playing them for suckers) is Plotting how to be a spy. Considers voting with them in D/R… oh?
NOT SHOWING THE FIVE SWATTERS fake alliance CREATION
CHENBOT SILLY PRATTLE HOUSE DIVISION TWIST COMING???
EVICTION
Daniel: clowns. michael 5 comps. monte and michael must be aligned. season gets boring.
Kyle: we’ve had one on ones for why I’m good for you. keep me.
VOTE:
evict Daniel
Monte, Britt, Turner, JULIE INTERRUPTS TO AUDIBLY BRAINFART (Daniel 3 / Kyle 0
evict Daniel
Alyssa, Taylor, Indy, Jasmine trying to fake needing cane calls Jule apple pie, Joseph
evict Kyle
Terrance
DANIEL EVICTED 8-1. Whispers to Terrance.
JULIE talks to DANIEL Get ready for Daniel to be denial.
Meaning behind speech:
I know what’s going on.
He didn’t go after Alyssa he says. Doesn’t regret calling people out.
Daniel isn’t responsible for the veto stupidity with NIc.
If I’ve done wrong blahblahblah
Michael idiot sandwich. Jasmine love you. Kyle sheep? u are the sheep. Terrance your boy. Joseph: eyeroll. Taylor: don’t have to speak to me until finale.
JULIE ANNOUNCEMENT TO HOUSE. put the lays away. Jasmine is late.
NO MORE BESTIES. JURY BEGINS.
ED. so what did last pairs standing get Julie? You said last pair standing would get a reward… oh. These are not the rewards you are looking for Jedi mind trick? Wouldn’t even fool Howie.
(factoid: winning wall times in previous season average out to one hour 17 minutes).
CONSPIRACY FEST HOH.
Tinfoil hats. They know me. Let’s Chat:
New Twist 2 games of bb simultaneous? Ohhhboy. here we go. Grod Grodding the Groddamned thing now.
2 hour next Thursday. no interaction with 2 groups. Double eviction. So this is the how to stop a steamroll fix.
JASMINE OUT before episode ends.

That was a sure bet in Vegas!

Yeap! Grod doesn’t like the steamroll, knows there’s nothing the 4 remaining losers in the house (Terrance, Jasmean, Indy and Alyssa) can do about it to stop it, and apparently doesn’t think anybody in the LO’s are willing at the moment to bust the alliance to work with them to do it either, so let’s “split” the house to give them a chance.

Refresh my memory, but I don’t recall any house splitting last season when the CO was steamrolling. I wonder why? Could it be that TPTB were just fine with that particular rolling? I guess one steamroll doesn’t necessarily = every other steamroll, and thus no measures need be taken to “shake things up”.

Everybody was right Jazz down first. Bet that she blames her ankle sprain. Lazy ass is so comfortable

Who has just under 7 minutes for Jasmine?

Wow Jasmine is so useless! As soon as Julie said good night she just fell off. What a floater!!!!!

Jasmine falling first is completely unsurprising. The only question is what new injuries she will claim from the competition. Ankle? Knee? Shoulder? Internal bleeding?

I hope the next comp is one where they can’t speak so we don’t have to listen to Effin jazzy J and her wonky honky funky voice
Omg. I just can’t.

I wish I could “like” my own posts.
Yes I just said that.