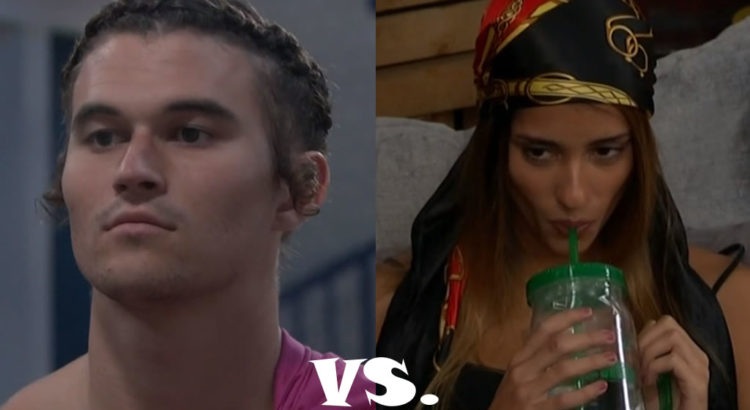 A solid start to a season. On one hand, Frenchie is insufferable on so many levels on the other hand he gave us plenty of crazy to have fun with. Frenchie stayed up until 5 am every night and talked so much he lost his voice for 3 days. He had 5 different targets and made half a dozen alliances hence the nickname for the week: Frenchie the glue clown.

Frenchie won the first Head of household competition. He starts off signaling how much he hated it when a minority, older person, or a woman is out of the loop and gets evicted week one. He wanted a meathead to go this week. He went on to tell the girls he wasn’t putting a woman on the block.

The meathead he wanted out was Christian or Brent. Christian wins the wildcard safety and Brent has a one on one with him where they bond over family deaths. All while this is going on he’s creating a bunch of alliances. Too many for me to remember but here are some of the main ones

Of course, these alliances were made in the messiest way possible. Frenchie settles on nominating  Kyland and Alyssa going back on what he said earlier about women and minorities. His reasons include: Kyland was lying to his face, He’s not dumb, Big Fish (Alyssa relationship with big fish Christian), Showmance killer (Alyssa-Christian), Big Kahuna, he’s observant etc etc.. Before veto is played Frenchie changes his targets to Travis and DerekX for the same reasons.

DerekX ends up winning the Power of Veto and uses it on Kyland. Frenchie then nominates Travis who is now his target. While this is all happening the rest of the house is forming their own alliances. A rough list includes
“COOKOUT” (Azah, DerekF, Kyland, Tiffany, Xavier, ** Hannah is a sub in for Kyland if needed** )
“King Slayers” (Britini, Tiffany, Claire, Azah),
“Enzo’s angels” (Alyssa, Hannah – I’m not sure how serious this one is)

The season has all the makings of a fun summer. It’s a great cast. The one worry I have is the lack of crazy in the house. It’s basically Frenchie. Now I can’t stand the guy but if he goes early we might be in for some on the rails weeks. Specifically, there were conversations with DerekF and Xavier about keeping everyone even keel and calm. I’ve heard this before.. from BB16 Derrick.

Check out how much a week of feeds can change how we rank houseguests. Frenchie from 1st to a STRONG last, DerekF in top 3 now the middle of the pack and dropping, Claire from middle to top three and Sarah Beth from the gutter to the top floor. Everyone close to Frenchie seems to be taking a hit.

View the previous day ranks on the – Ranking Grid 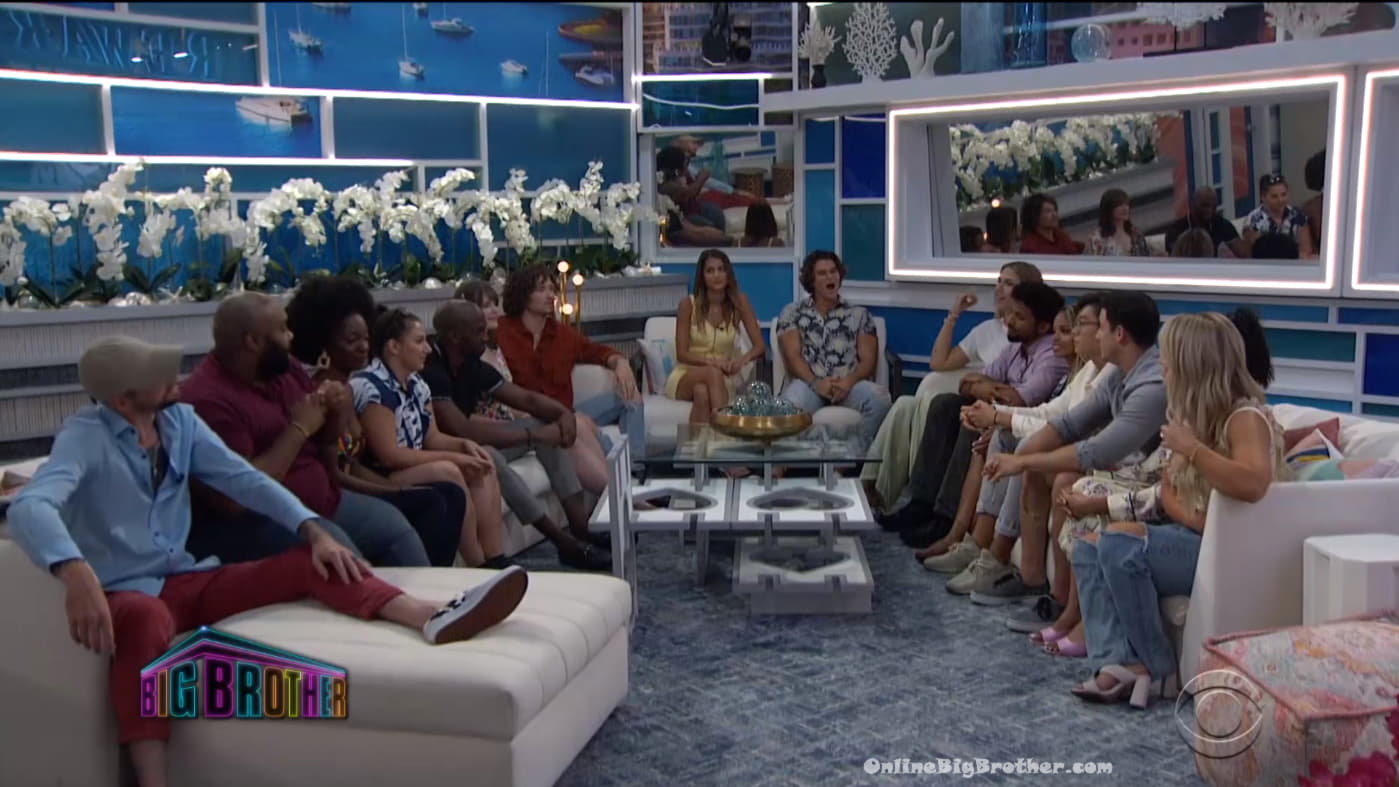 Results from the Live Show 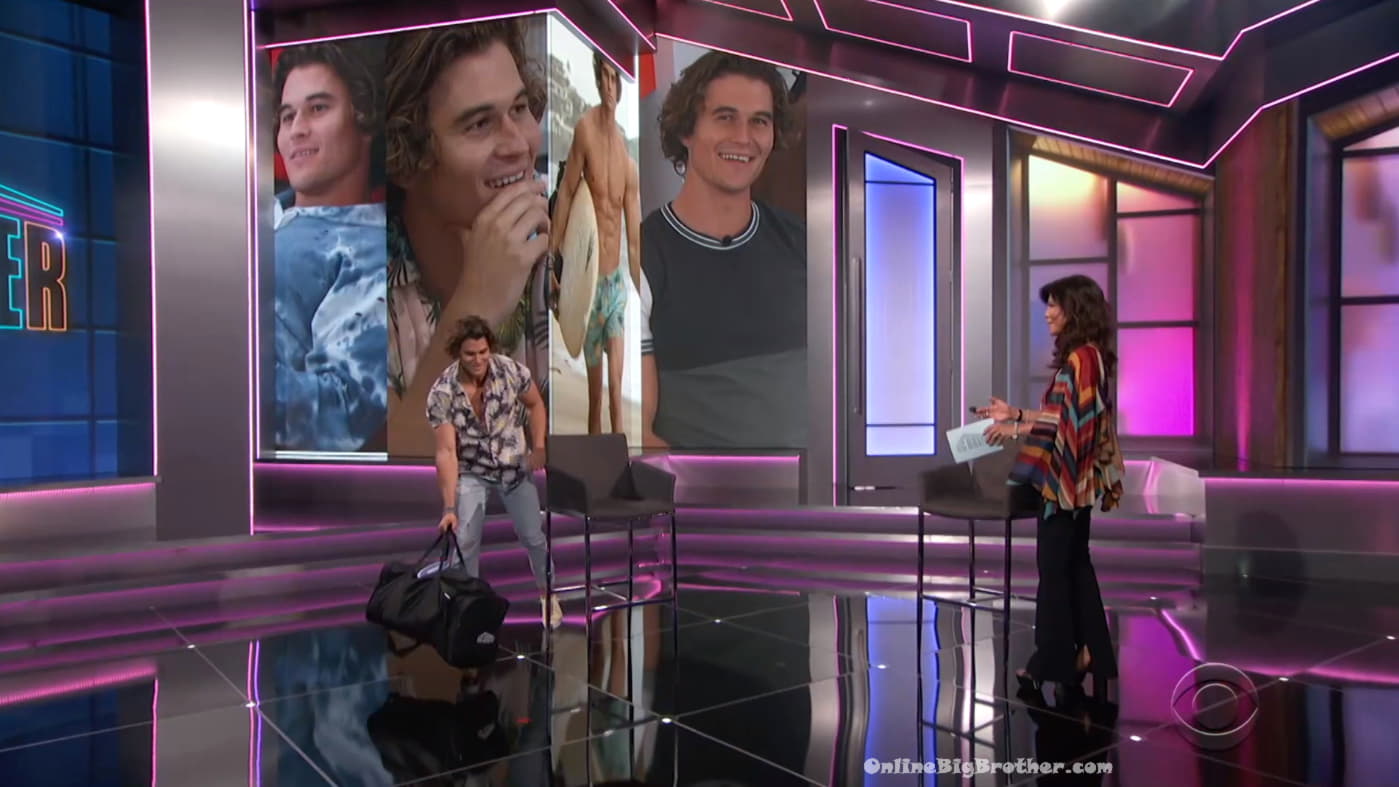 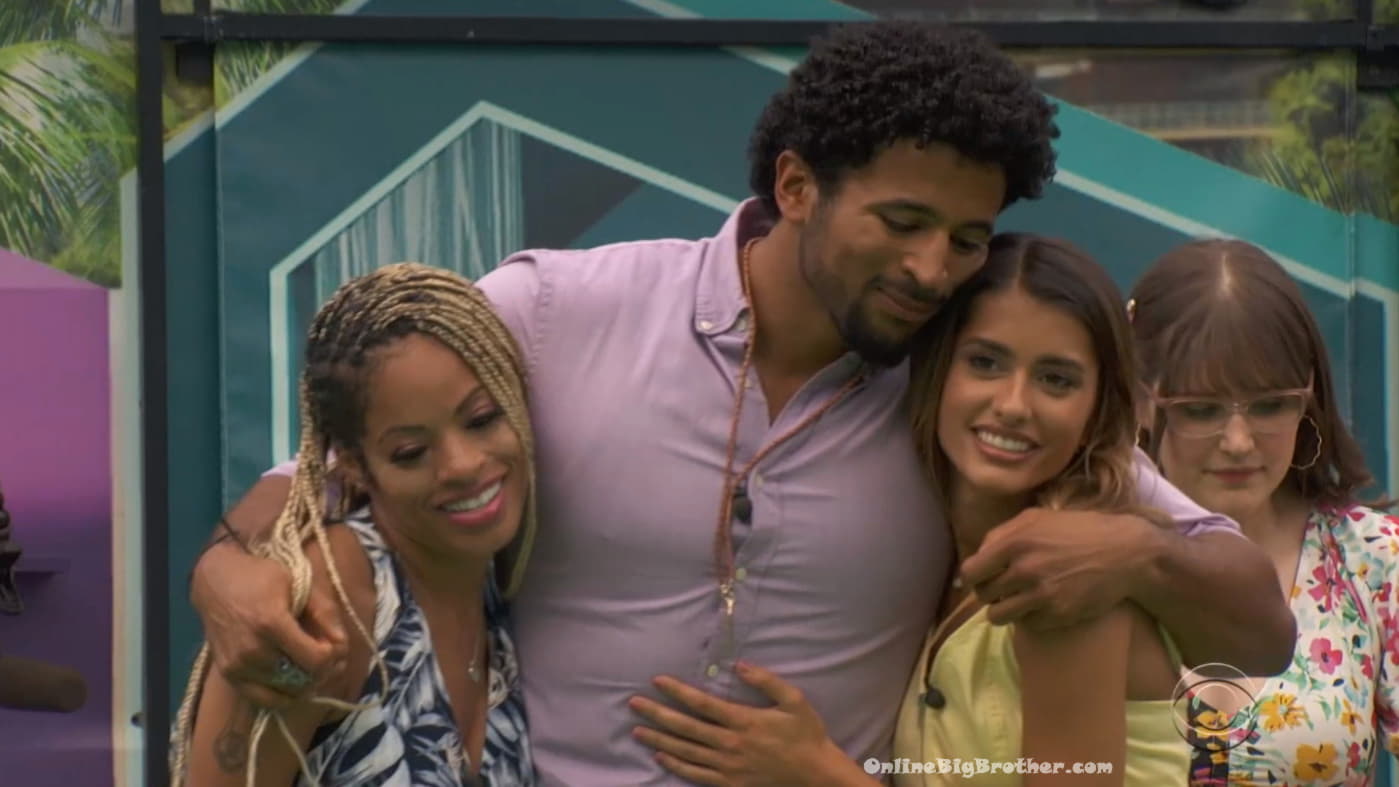 Kyland WINS the power of veto 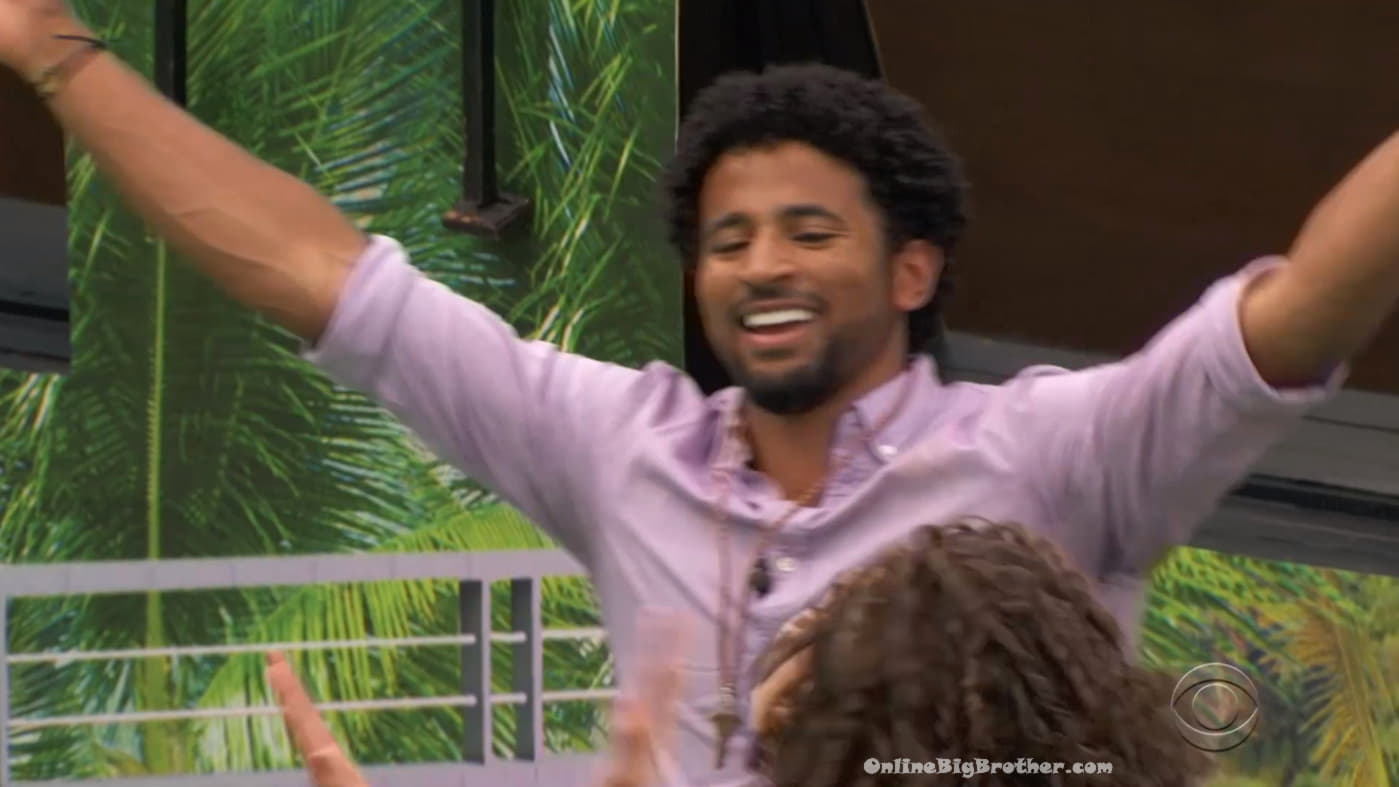 This weeks wildcard winner has to switch teams to get safety

The live feeds are very annoying this season — it’s like TPTB have decided if any strategic conversation starts we’ll cut the feeds. I guess that’s one way of controlling the narrative without having to worry about receipts.

Eviction day feeds are always sketchy at best but we missed Travis blowing up Frenchie (as per Julie) re:broken promises — I wonder if he also knew about his multiple alliances and that got exposed too.

With Kyland winning HOH here are a few things to know:

Plus Derek X saved him with the POV

Keys to watch for:

It’s hard to imagine Frenchie & Brent won’t have a bigger target on their backs after everyone speaks to Ky. At a minimum Ky will know they both have their hands in a lot of pots & were the people who put the biggest target on Ky’s back. I have a hard time believing Xavier or Tiff won’t share that intel with him (Big D I could see protecting Frenchie but NOT Brent).

Even prior to the Wild Card comp the ONLY people who aren’t in Ky’s three alliances are SB, Brit, Hannah & Derek X. Again – I can’t see Tiff/Claire being cool with that quartet being the people who get targeted. I think the ladies will push Brent (maybe Christian & Frenchie) but be fine with Whitney & Alyssa being secondary options.

I also think Brent/GC will push hard for who they want targeted and try to run his HOH which won’t go over well with anyone in the house.

Great breakdown and considerations! It’s going to be a fun week!!

Sb and Ky have a good personal alliance though, don’t they? He told her about the Slaughterhouse and Butchers.

Oh you are absolutely right —- I totally forgot they made a F2, so that leaves just 2 females & Derek X (if he stays true to all his alliances) but I think the ladies will try to push for Whitney, Brent or Frenchie.

I don’t think, even with Derek and Xavier working to keep everything even keeled and calm, we’ll have a season like 16. Derek’s season was with a cast of people who just wanted to stick around so they could get followers. They didn’t care who was playing the game or in position to win. Sadly, the only ones looking to win were Derek and Donny and Donny was screwed from the start.

This cast though seems to have multiple people looking for an advantage over the others. It’s more than just the one side in power and the outcasts but rather several groups vying for position right now. The first shots haven’t really been fired yet as Frenchie’s HoH was such a mess. I imagine this next week will see some fireworks as alliances are solidified and divisions become a little more apparent.

That’s a good point season 16 did have a lot of flops in the cast.

Poor Brent. How will he react when he realizes that there are multiple alliances courtesy of Frenchie?

The Beef
Reply to  Robert

And how will he react when he realizes he’s not in charge of the house, as he seems to think he is per the TV edit? It’s pretty damn clear both Frenchie and Brent think (or I should say thought) they were in total control of things, based on what was said all during the GC’s HOH, and during the TV shows, but now that there’s a “new sheriff in town”, everything has changed, and the new sheriff is NOT like the old one! lol

#1 highlight of the season so far…. I haven’t heard a single HG talk about wanting to grow their number of Instagram followers. I think we actually have a season with people who want to play the game!

P.S. – If Frenchie leaves, I’m counting on Derek F. to bring the crazy.

No scheme for meet and greets, clothing, or selling BB souvenirs on ebay. It’s becoming more apparent how poor the kasting has been this past decade.

Yes…she referred to her swimwear company

The Beef
Reply to  BBP1Day1

Yeah, you can’t really blame her for that (IMHO). To me, that’s a real business, and different from just trying to “pad” your instagram followers numbers.

Did Derek F do that on purpose? There was something weird about how he hit the ball

Will that Wildcard twist she just announced for this week’s competition be effective with this group of people?

Whoever wins the wild card will switch teams in a nanosecond for safety. and their teammates would understand because they would do the same thing. Now…if there is a punishment that goes along…things change

Yes!! Khyland is the new HOH!!

He is likable. Hopefully that doesn’t translate into a boring week

This could be an interesting week. Frenchie might be an easy nominee but I haven’t paid enough attention to know who his potential targets would be.

I’m hoping this will happen!

WHERE ARE THE FEEDS? Why are they doing this? Feeds always came back on after live show

Not right away. Occasionally they wait 2-3 hours after it airs on the East Coast

The tweak this week to the wild card comp has all kinds of implications.

As I noted in the previous post Ky is in two alliances with Frenchie and one with Brent so if they play in the wild card that sends up red flags.

Julie didn’t say but I’m assuming this week ONLY the winner is safe b/c it’s a risk week instead of a reward (last week Christian got to save another hamster). That’s a good thing for Frenchie since he has so many F2’s having to pick one person to save would expose him.

There is strategy in which group the winner elects to join b/c that also could expose the hamster if they aren’t smart. For example, I could see Frenchie joining the Aces bc he’s close to Whit/Brent but that’s the wrong move.

The logical move is to join the team with the most players you’re worried would nominate you b/c then you’ll be safe if that team wins. Which of these players would understand that’s the strategic move?

The only players who can’t play this week are Hannah & Christian b/c they played last week & the Queens b/c they are safe.

Julie didn’t say the winner of wildcard gets to pick the team. Maybe it’s a spin of the wheel or drawdown determine the team. That would make it more interesting.

I think this Season SUCKS, so far…I cannot even enjoy the Live Feeds this year, they don’t want us to hear certain things.

Was it just me or did it seem like Brent working hard to get a hug from Travis upon exit only for Travis to always turn away from him?

I sincerely hope he puts Frenchie up as a ‘pawn’ and let’s him sweat out the week. Karma

You are vicious and that is going to make Glue Clown explode!

“How dare him talk to me that way! Is that a threat?!”

Now get out Glue Clown or his right hand man Brent. Whitney would be a third target in case one of the other two win safety in the Wildcard competition and or Veto.

Getting out Derek X would be beyond pointless so I hope Kyland keeps him safe. I mean he used the damn Veto on him so he should get at least one week of safety. It’s so early so there are many people he could go after.