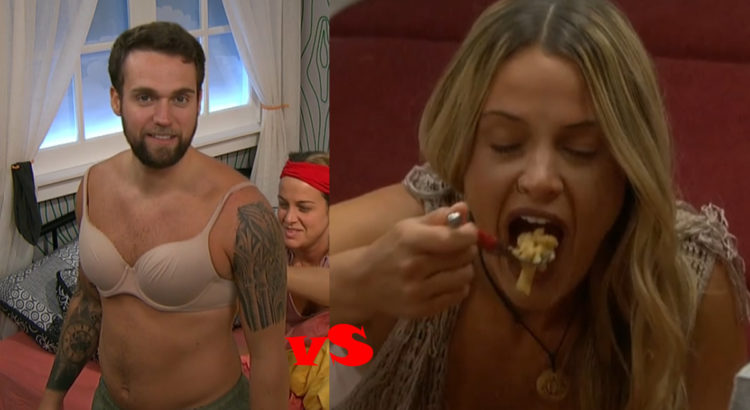 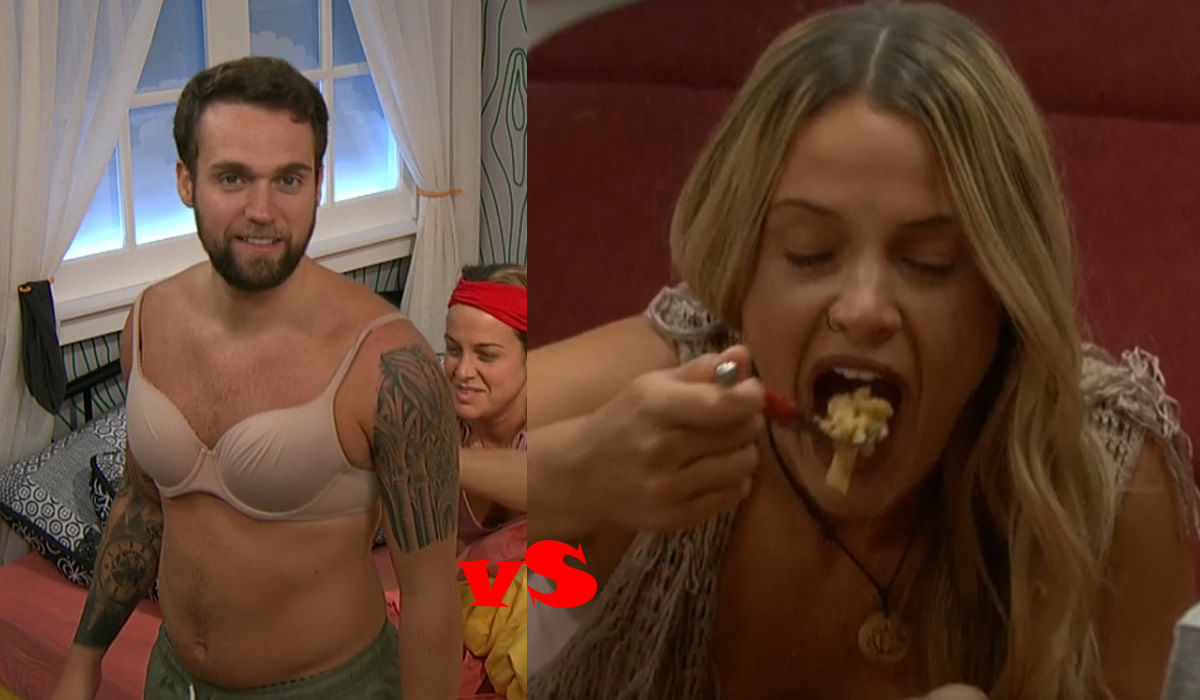 Three weeks in a row now we’ve had Christie on the block. She’s not getting evicted. The feeds were very slow this week.

Last week Sis got to join Jack and the soon to be AFP Kat in jury. Big Brother introduced PRANK WEEK which included some clowns, bird calls and a fan-voted power. The Head of Household was a crapshoot and Holly wins. The fans were given a vote to pick a Prankster. This Prankster that will be able to nominate one person sadly that’s all they did. Nick wins for the sole reason he would nominate Christie and her chewing. Holly ends up nominating Nick and ‘Secretly’ via the power of the grod Nick nominates Christie. With high certainty, you can say Christie was going to be nominated regardless of the twist. Go twist.

The power of veto is played and Jackson pulls out the win. Nick campaigns to get the veto used on Christie allowing Jackson to pick the replacement through Nick. Jackson doesn’t use the power of veto leaving the nominations locked. The votes are against Nick. Big brother gives the houseguests clowns and pies to keep the feeds sizzling. Nick puts in work to flip the house and lays out sound reasons to stay vs Christie. unfortunately he’s his word is just as bad as Christie’s and he doesn’t have the loyalty capital to have anything stick. Nick’s last pitch to Jackson and Holly included a condom analogy. It almost broke through to Jackson but didn’t seconds after. The morning of the live show Nick told his last vote, Nicole, to cast it against him. I will always remember Nick for being the guy that humped people with his clothes on.

Results from the live show

Catch the live Head of Household competition on the feeds. Whoever goes home we all win!
Grab your live feeds —-> BB21 Live Feeds Subscription LinkNick is evicted 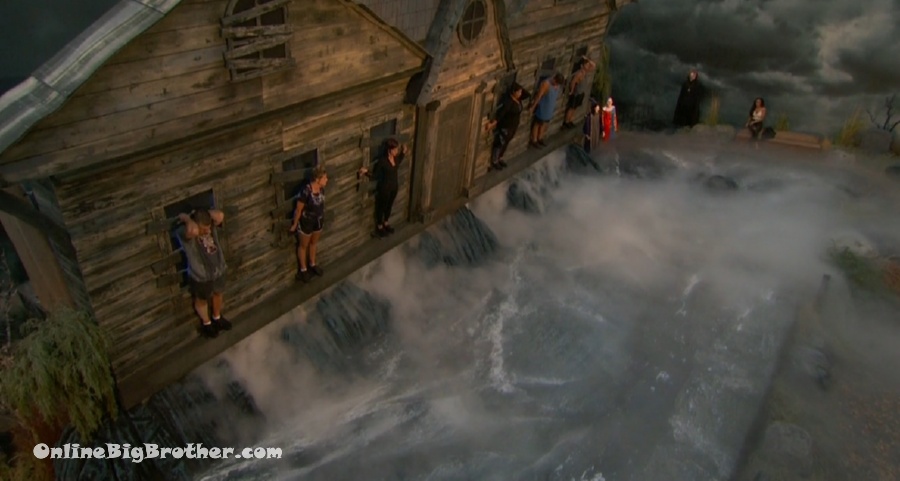 I have a feeling Christie will win this HOH..

Well if she does win I hope it’s Jackson out the door next for not getting her out when he could and should have :)

Nick was voted off.

I’m cheering for Nicole to win though

I’m west coast with a football game. Where are the results?

Nick evicted. I suspect Jess and Cliff will be the first to fall.

Thanks we don’t get the episodes until 2am.

Is it too early for Nicole to win?

Wall comp would favor tommy but I also think he won’t want to win so probably christie or nicole.

HOH comp is am endurance off eating and crying .

As much as I want her gone, I hope Christie wins. Hope she puts up Holly and Jackson and either one can go. Don’t care. They had 2 shots to get her out. They were stupid.

My Thought bubble recap of the Eviction episode:
Julie says the house has been in a frenzy this week due to prank week. When did that happen? Frenzy??
Jessica getting d/r time. Always a sure sign of a frenzy?
Pie war. the only excitement of the week… not game related.

The Tommy promise segment. We realize that Sam and Nick discussed pulling Tommy away from Christie somewhere between the time Bella went on the block and Sam left… right? This whole had your back all game thing… I still don’t buy it. It was emotional manipulation through flirting. As strategy.
Send in the clowns. Other than the clowns playing big brother this season.
Nick’s campaign to Holly and Jackson with a d/r that doesn’t match what Jackson said as soon as he left the room. oh. interesting.

Off we go to visit the set of Three’s Company.
Finding their views on houseguests is interesting though i always suspect heavily d/r style influenced. Of course. I’d forgotten that Kat wasn’t a Nick fan. Honestly.

Speech time. How many bullcrap things did bullcrap Christie say she is studying? Can one involve a vow of silence. please?
Nick’s: meh. he’s sitting in the midst of people needing mental health care talking about reaching out for help.
Julie is talking to Nick. he thinks he’s going to Raven the jury. Because Tommy and Christie are dirty players. He dropped Cliff from the list? oh. HI ms. grodner. pleasant to see your hand in Nick’s butt.

Wall comp. So odds are it comes down to Nicole, Tommy and Christie if Jackson is throwing as he has said. If not throwing it might still come down to them. Although how Christie is holding the wall looks stupid.

Look Jess made it through the commercial in an endurance. Personal Record.

So if they are doubling… with the numbers as they are… are they scrapping the special sunday eviction of 4 to 3 final houseguests?

They jumped a few times and the heart rates were elevated. It’s like saying the sloths are really moving, everything is relative.

So to recap, rather than get rid of Christie, Miche and Holly have handed Tommy/Christ a 2 in 5 chance at HOH. But the odds are higher than that since it was reasonably foreseeable that this would be an endurance comp and you know Nicole and Jess are not going to win it in 1,00 years.

So basically their decisions mean there is a 66% chance that either Miche or Holly (almost certainly Miche) is going home.

Not a good decision.

First time I’m rooting for Christie to win so she can put up Holly N Jackson. How long do they think they have before she decides to go after them?? She’s said countless times that she’s not going to the end with couples. Smh..

Come on Nicole hang on to that wall

Come on Nicole hang on to that wall and no deals

With Nicole having injured her back yesterday I wonder how that plays into things b/c I could see this being a comp suited for her to win. Her premonition was to win – so we’ll see.

*Jess/Cliff should fall first based on their weight/height
* Although Jackson is fit his height & extra weight will also make it difficult (PLUS he said he would throw it – but I suspect he won’t immediately throw it especially if the words from Nicole regarding Christie targeting men resonated).
* Tommy could be a factor in this but does he really want to win? It will probably come down to how safe he feels against Nicole or Jackson if he stays up.
* As someone noted the way Christie is holding the wall doesn’t look smart (question is how much has Jess shared with her about Nicole’s plans as I could see it coming down to Nicole & Christie (IF Tommy elects to not fully compete & IF Nicole’s back isn’t too bad).

With the DE coming next week it will serve as the PERFECT opportunity to take out one of the big hitters: Jackson, Christie or Tommy (Holly) so who wins tonight is also key b/c Jackson winning would put extra pressure on Holly as would one of Christie/Tommy winning as the other would be trying to win to keep them both safe in DE.

Strangely, Nicole winning HOH should actually make her safer as she can make deals but also it would free up her F4 to have a trio playing in DE (& Jess wouldn’t target her) so she’d only have to worry about ONE of Tommy/Christie (who’ll make a deal with her to stay). Plus again the group will target a big player.

over head hold is better for men with more muscular frames than the usual side holds.
the cold blasts to the back should have been beneficial to Nicole. It’s what they told her to do last night. cold every ten minutes.

Soulchild1605
Reply to  another name

How did she hurt her back?i missed that

another name
Reply to  Soulchild1605

wasn’t on camera on feeds at the time. she fell leaving the boat room i think. tailbone and lower back pain.

Jess down, whining about it hurting when she fell, talking fricken non stop !! Please shut your pie hole !!

This had the makings for Nicole especially when Christie fell but Nic readjusted her hand and fell doing it (DAMN). Tommy either feeling safe if he sits beside Christie or believing he has Holly/Jackson snowed falls so once again Jackson is the HOH.

Another week of kissy-kissy & what should be either a Christie-Tommy nomination or Christie-Jess.

This should be a week where we see Christie go ballistic trying to make up every possible story about Cliff, Nicole & Jess to avoid the block & we might finally see Tommy-Christie throw each other OTB. Jackson will likely not be happy he had to win again, but given Nicole hurt her back yesterday & their friendship has grown he hopefully won’t be too hard on her.

The big question is whether he puts them both up immediately which at this point makes the most sense so Tommy can’t win & pull her down.

That was the best summary I’ve read here to date.
I can’t believe Nick put up Christy what a doo doo brain! He might be one of the worst players in history