Last night was part one of the 2 part Big Brother 20 Premiere. We were introduced to the new cast and watch them scramble into the house. The house guests were separated into 2 groups based on the groups they entered the house as. These two groups than competed in separate competitions. The 2 winners competed in a final competition with the winner of that one getting to select 2 groups to be safe for the week. The two losers of the first competitions were given costumes to wear until the live eviction next week.

Sam’s punishment is she can only communicate with them through a robot. She is stuck as a robot until the first eviction. robot offline she has to go to the diary room and has to return as a human when she hears robot online she returns as a robot

Kaycee is in a pinwheel unitard. If the pinwheel around her next spins she has to stay in the room she’s in until it stops.

Get them through this link 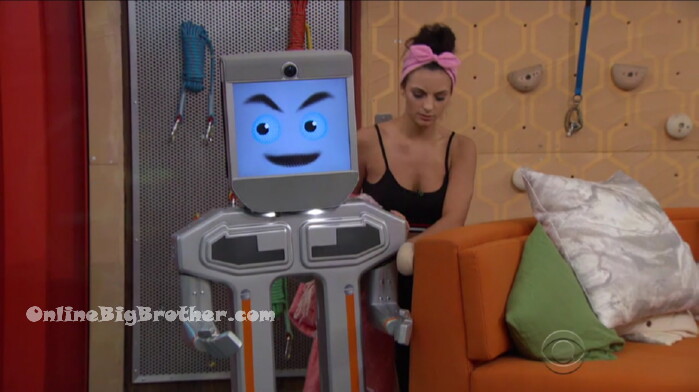 Sam is still a robot

Swaggy-p over hears Kaitlyn and Angela talking sh1t about him.. (Rockstar and ROCKSTAR are also there))

Sawggy-p – you know swaggy -p is around here creeping around..

Bros checking out the girls. 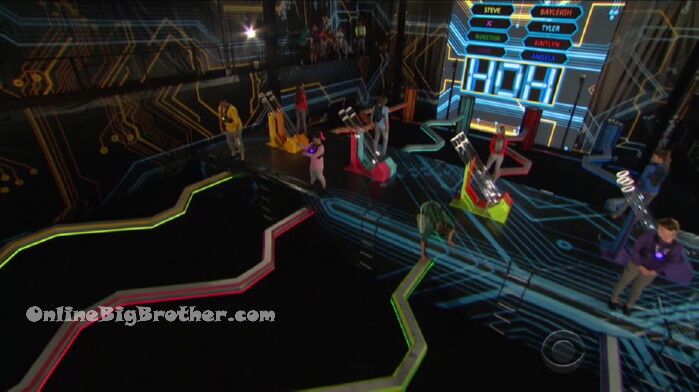 Steve, Winston, Bayleigh, Steve, Tyler, Kaitlyn, Angela, Sam, JC get to play. The players are supposed to run across grab balls and place them in other house guests tubes. Once you reach the line the house guest is “deleted” from the competition. 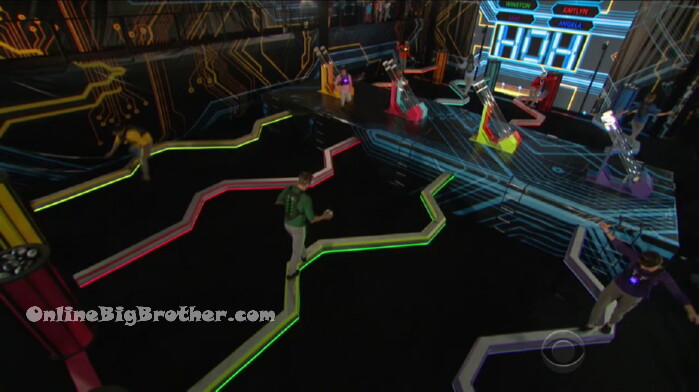 Sam is the first player deleted..

Steve gets eliminated next “now I gotta start working deals..” 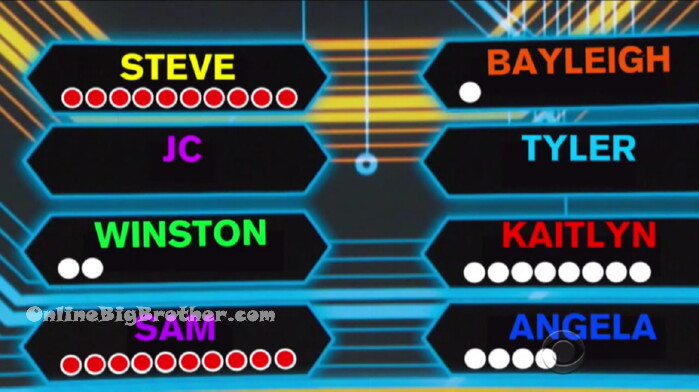 JC, Tyler and Bayleigh are the last three. 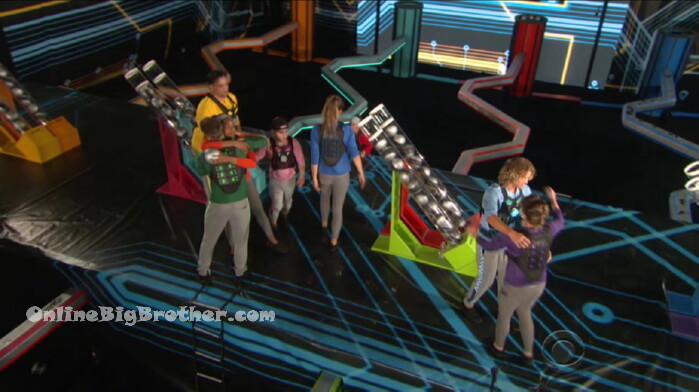 Tyler wins the Head of Household. He has 7 people to choose from for nomiantion 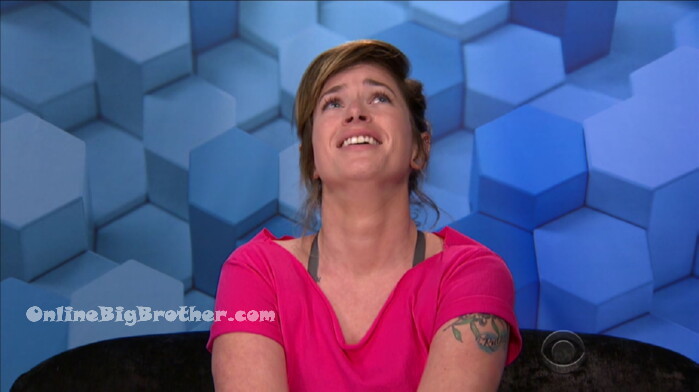 Sam is worried she’s going to be nominated.

(If they don’t show us on tonights show we’ll We’ll know who is nominated tonight.)

Tyler says it’s going to probably be Sam and Steve up and if POV is played Bayleigh goes up. 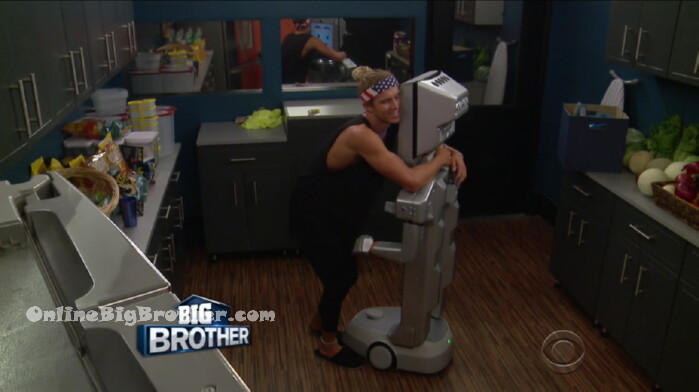 Sam Campaigns as the robot/ She starts to cry says she feels like a outcast. Tyler tells her she is safe this week.

Faysal and Kaitlyn come in to campaign to Tyler.. Kaitlyn wants to hold hands while they talk because”that is how we roll”. ROCKSTAR comes in..

ROCKSTAR says the worst move would be to put up Sam and Steve because they are not threatening. They recommend Winston and Angela.

Swaggy-P comes in and says Sam and Steve going home is the same as a nobody going home. Starts to push for Angela and and Winston. 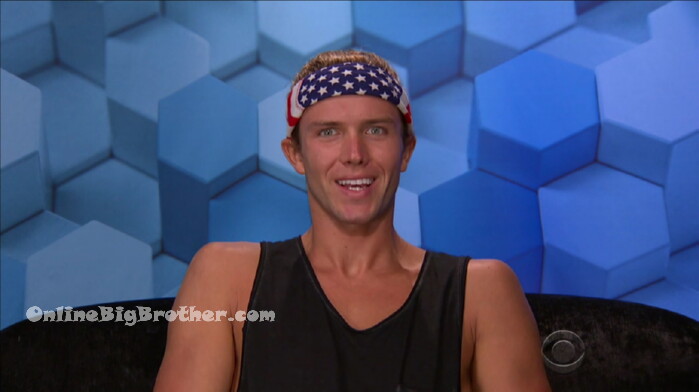 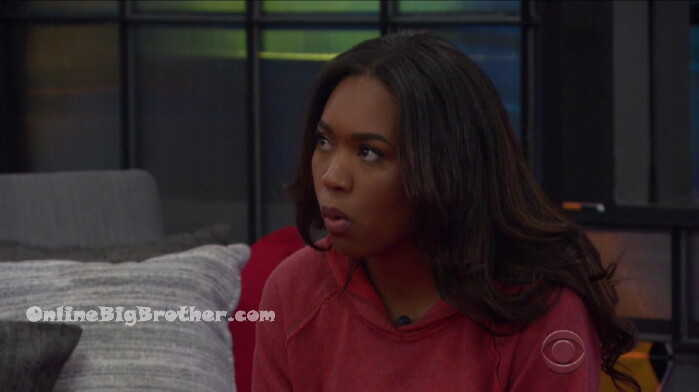 Bayleigh talks to Tyler tells him he’s the sweetest person alive. Bayleigh recommends nominating the first 2 people out in the HOH competition. Get the least blood on your hands. Bayleigh slips up and says her and Swaggy-P are close like family. Tyler is now thinking about taking a shot at swaggy-P’s crew and putting up Bayleigh. 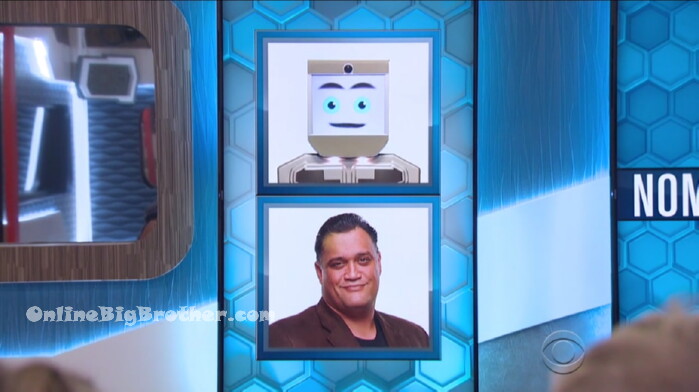 The robot is just too much

It was cute at first but like everything BB over does it.

Oy. I like Sam but watching her talk herself into being nominated was brutal

Tyler reminds me of a blond Carrot Top (pre-plastic surgery snafus, of course). He did the best thing for his own game, IMHO.

Steve is the obvious first eviction, barring a veto, that is.

Now, Granny needs these live feeds to begin before I fall asleep in my rocker.

*waves*
Here’s to another summer with OBB and all the community!

Anybody else getting a BB15 vibe from this season?

That season had a lot of drama, but I am starting to like this cast even less than that cast and that is saying something.

Save Sam and Steve!

Are you picking up a BB 15 vibe? No!!!! That was the only season that I stopped watching half way through because they were so mean and nasty to each other. I was close last year but they were so delusional it was fun to rip on them. Well hopefully your wrong:)

Much more impressed with Bayleigh’s self control than I thought I would be. I was expecting her to straight up go off on Tyler. She’s got some game. She went to Tyler and instead of attitude she tried covering pretty nicely actually. I think Bayleigh has a lot more game than I thought she would have. Her initial interview I felt she would not hold back at all. She just might be around a little bit. Sam is so sweet. I don’t want her to leave yet. She almost made me tear up. Hoping Sam makes it through this week

I’m seeing Steve as the easy out right now. He’s just too much of an outlier so I’m picking him as the favorite to go home unless something happens to save him. Then he’ll be the perpetual nominee until he gets voted out.

I don’t care if it’s too early. I’m calling it a Kraken season!

Seriously though, Rockstar is right. Wasting the first HOH on an eviction that can happen at any time is a stupid move. Scottie hasn’t been seen since Rachel and her identical twin Angela chased him away trying to kiss him. Dude is going to hide under the bed until finale night!

Sam has welded her way into my heart. I hope she stays!

NICE not wasting any time!

I know no one cares, but if you cats start saying “Kraken” all the time like you have since BB16 then I’m gone. Kidding. Duh

Only thing worse than that is people saying they are done and never watching again like anyone cares. Bahahaha

Does anyone else notice the pounds of make up Rachel wears and the barely any Angela wears and looks five times as beautiful naturally?

I’m lost on the “who has it?” But oh well. Goodnight

For those playing the Swaggy C drinking game. Tonight was 7 times. Less than I expected, but he wasn’t really featured tonight.

Thanks for the tally.

I stopped counting and decided to just drink.. ;) Hopefully when the feeds go on we can start counting again.

Tyler really looks like Frank in that DR pic you posted…..