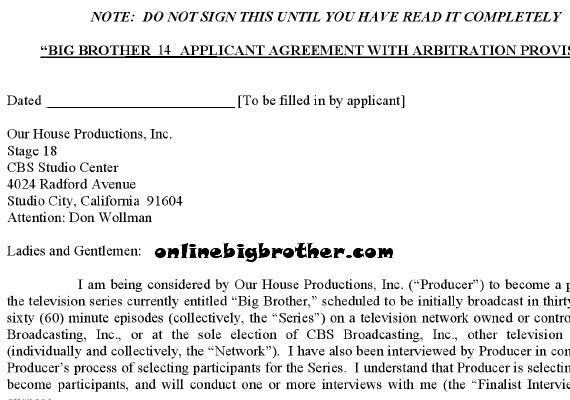 Big Brother 2012 Casting is in full swing from what we’ve heard the turn out has been solid at the auditions. There is still a couple weeks worth of auditions remaining so if you are on the fence just take the plunge the show needs a good cast.

If the Casting calls isn’t in the cards then the online application is the route to take. Remember to give the Eligibility requirements a look and Check out Dan Gheesling’s Book ” in-depth Step By Step Guide to Getting on Reality TV” it’s help you a lot.

record me and my actions and record my voice and other sound effects in connection with the production of the Series on an up-to-a-24-hours-a-day, 7-days-a-week basis (including, without limitation, whether I am clothed, partially clothed or naked, whether I am aware or unaware of such videotaping, filming or recording and whether I am awake or asleep,

I shall not be allowed to maintain a personal website, nor shall I permit anyone or any entity to create andlor maintain a website on my behalf (regardless of Whether its contents do or do not relate to my experiences in connection with the Series) that is accessible to the public, and that until such time any existing website that I may currently have, or that is maintained on my behalf’, shall be taken off-line and replaced with the following holder: “Site Under Construction.”

All such recordings may become a part of the Series and may also be exploited by any and all means and media, including, without limitation, through the Internet andfor any mobile or wireless device, as set forth more fully in paragraph 1 above (whether or not such recordings are included in the Series as initially broadcast on television).

Can’t Have sex or financial arrangements with the Staff of the show
I remember last year Daniele was always talking about knowing members of the production staff.

I hereby agree that I will not enter into any personal andfor social relationships with any of Producer’s and/or NetWork’s employees, or those of any of their broadcast affiliates, or any individual closely acquainted with the production of the Series, while I am involved in the application process for or participating in the Series. I understand that such prohibited relationships include dating and having intimate andfor sexual relationships.

Can’t beat up other houseguests
Physical violence is a no brainer but the line about intimidation and threats of physical harm has been crossed before.. many times.

I agree not to damage the House or any other location used in connection with the
Series, Whether exterior or Interior

CBS Big Brother Production can portray you any way they want

I irrevocably grant and release to Producers, in perpetuity and throughout the universe, the exclusive right, if I am selected as a participant in the Series, to depict, portray and represent me and my life and all episodes, exploits, events, incidents, situations and experiences contained in or associated or related to my life which occur, will occur or have occurred and any time

There is pages and pages of release information and legalese.. If you are serious about getting on the show read it and understand what you are getting into.

wow. that is crazy. i’m surprised anyone would sign up after reading that. i def would not! would you simon?

Neither would I but there are million of attention wh*res that will do anything for their 15 min. of fame.

I would not be on Big Brother.. Mainly because I know what you need to win that game and I don’t have it.

What do you need to win the game?

Mostly Social, conversational skills and thinking strategically. Being able to apply a strategy in social interactions.. To a lesser degree Knowledge of the game and having Production in your corner / fan support / Ratings appeal helps.

Ohh and luck you need some of that.

So they not allow of discuss of criminal record.

I would compete but i don’t have potential of doing it.

Does anyone know why CBS tv shows like The Amazing Race and Survivor get to come on more than once a year,but Big Brother only come on once a year?

They tried it during BB9 due to the writers strike and it was for the most part a failure ratings wise. I’m not sure if there is enough popularity for it to be during the winter months. one reason I like BB is it’s once a year something special like your birthday ;)

Ya, plus. We have to have a life! If it was on twice a year, we’d be glued to the computer watching live feeds all year. hah

There are three types of plans that I can foresee that one can implement in order to win BB.

1. The Dr. Will Plan: This plan entails dropping every comp and instead focusing on honing your social skills to the point of manipulation i.e., until you’re the puppet-master of the house. Weakness of this plan: If you don’t win comps there is no guarantee you will stay in the game. Strength: It crowned Dr Will as the winner and got him fourth place in BB All Stars, so he must be doing something right.

2. The Natalie Plan: Lay low, seldom win comps, and attach yourself to the most powerful alliance in the house by guaranteeing that you will vote however they wish. Weakness: Same as above. Furthermore, can draw attention to yourself as a floater. Strength: Got Natalie second place and got Adam third place.

3. The Brenchel Plan: Win comp after comp until the end. Weakness: Not impossible to accomplish but extremely difficult. Draw attention to yourself as a major threat in the house. Strength: The more you win the more you can’t be evicted.

4. The Jordan Plan: Win America and your houseguest’s hearts with sheer niceness. Weakness: The House follows the laws of the jungle and unless you have a man or a powerful person protecting you it’s bound to fail. Just ask Kayser. Strength: If the Jury likes you and you get to the end, you most likely will win BB.

Sorry that should say four. I added one at the last minute.

You forgot the Evel Dick plan, intimidate and piss off everyone and when you get to the end they will vote for you and want to be friends.

Forgot to ad Weakness: have another house guest with a spine. Strength: Not only did he win the game he made them the other house guests put his daughter in the finals with him.

On a more serious note, Dick won because of two reasons (1). Most important was the persuasive prowess of Eric and (2). America’s player twist.

So I guess if you want to win using the Evel Dick Plan you need a Eric and America on your side.

Either America loves Dick (pun intended) or really hated the other people in the house. I think it was people couldn’t stand the others and enjoyed the tormenting they were forced to endure..

I remember RTVZone, probably the best thing to watch on BB last year except the live feeds or coming on this site.

Big Brother is such a game of strategy and manipulation it’s crazy. Ever since Season One my friends and I have watched the show religiously and have discussed how perfect a candidate I would be. Alas, I lived in Canada…. However, I recently moved to Dallas TX and am planning on applying! This isn’t about the fame for me, and I would like to say it’s not about the money either but, lets face it…. it’s always about the money. lol Honestly this show is just something that I thrive on in every day life, and that’s social interraciton. The thrill of playing this game is something that I have wanted to be a part of for a very long time and now I finally have a chance! Please follow and support me on my quest to become the first Canadian House Guest in the Big Brother house!!

Thanks So Much Everyone :)