10am Kalia, Brendon and Shelly are in the kitchen making breakfast and waking up. Brendon tells Shelly that big brother usually wakes them up early on a havenot competition day around 8:30 and then hold the competition around 11:30 / 12am. Dani gets ready in the bathroom. Then comes into the kitchen and asks when big brother locked down the backyard? Brendon tells her early. Dani asks when the competition will be held? Brendon says he thinks around noon. They talk about how the havenots will have to get some random food to eat again. Adam, Kalia, Dominic, Dani, and Brendon are all in the kitchen talking about music. 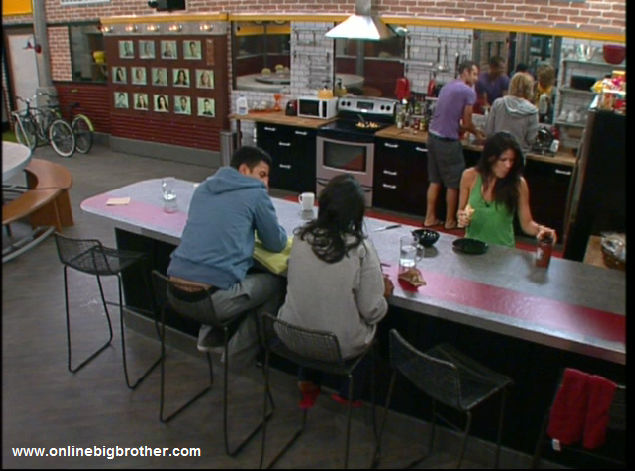 10:20am – 10:40am Adam, Dominic, Brendon, Dani, Lawon and Kalia are in the kitchen talking. Dani asks Brendon what he would be doing right now if he was not in the Big Brother house. Brendon says that he would be studying. Dani asks at 10:20am? ..BORING! Brendon asks her what she would be doing she said eating cereal and watching pvr. Kalia talks about how she met Renny just before she came into the house. The conversation changes to talking about Casey. Jeff talks about how Casey got the margarita party for everyone and didn’t understand why everyone was down. Jeff told him that he thinks he is going home. Casey went to ask and then came back and said I think Im going home! Jeff says that Casey didn’t go for the POV and instead went for the maragarita party. They laugh. They are all gathered around the kitchen bar talking about and actors. Dani complains to Brendon that Rachel twice climbed in to her bed and woke her up ..asking if she was sleeping.. Dani starts pounding her fist into her hand. Brendon asks really?! 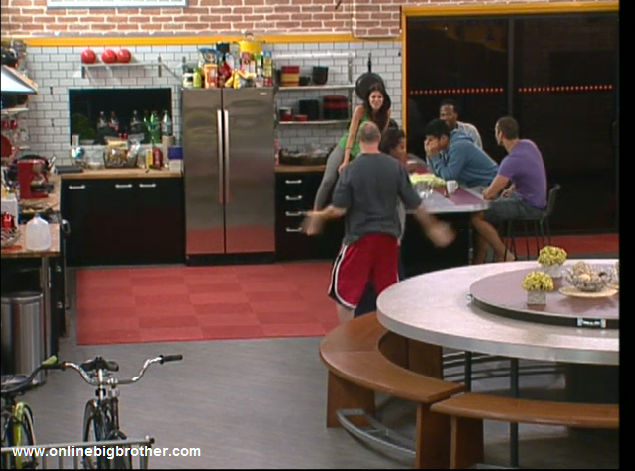 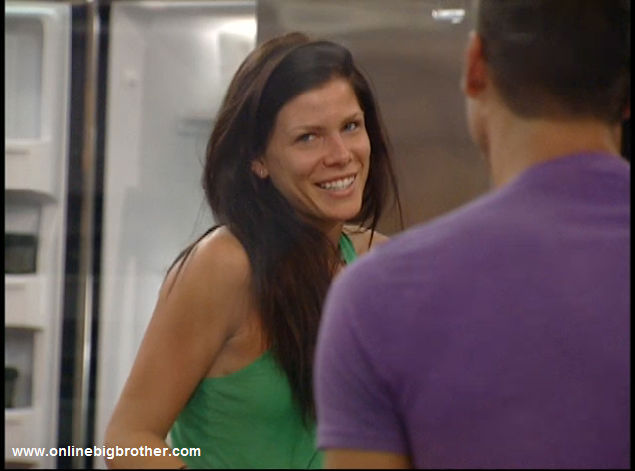 10:45am – 11:10am Big Brother cuts the to the we’ll be right back screen… The keep coming in and out. Kalia yells BLANK the feeds. Brendon is talking in his annoying Bruno Mars voice. Dani, Brendon and Dominic head into the bathroom. Lawon, Kalia and Cassi are in the havenot room back laying down. Kalia and Lawon are talking about how the week will play out, when nominations are, pov, pov ceremony … Kalia tells Lawon that her and Lawon are not going up on the block. She then whispers and points at Cassi telling Lawon that Cassi and Shelly will go up or Adam and Dominic.. those are the choices. Kalia says that she doesn’t know who they are putting up …but that Dominic made it very clear that he was going after them.
See What They Can’t Show You On TV!SUPERPASS – 3 DAY Trial! 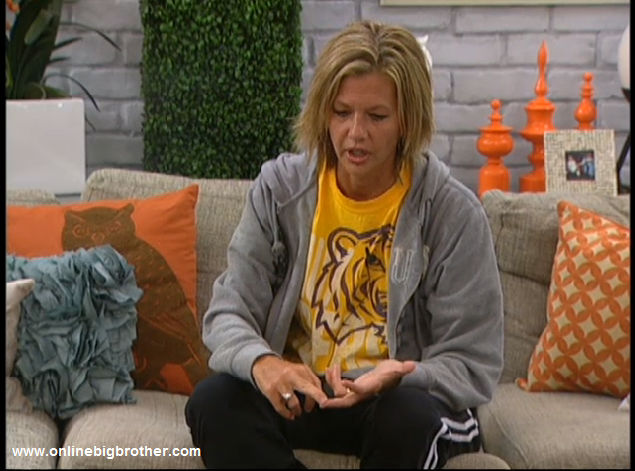 11:15am – 11:30amShelly is up in the HOH room talking to Jeff and Jordan. Jeff explains that they want to talk to Cassi to find out where she is at and to get Rachel to apologize about their fight. Shelly is tells them how the other side all blame Adam for the second vote. When it was really Shelly who voted Keith out. Shelly says that she feels bad for putting it all on Adam but she says that she has to. They talk about how they should get Dominic out. They think Cassi will join once Dominic is out. They talk about how Rachel is jealous of Cassi because of Cassi’s looks and thats why Rachel dislikes her. Jeff says that after the talk he had with Adam ..he thinks he has Adam back on their side. Jeff and Jordan tell Shelly that she is in the best position of everyone, that everyone loves her ..and that she isnt a target. They talk about how Lawon is a liar. Shelly says she dosnt tell him anything. They talk about how fake he is and how he overplays everything. Jordan asks Shelly if Cassi ends up winning HoH will Jeff and Jordan be safe? Shelly says that they will be fine, and that Cassi would go after Brendon and Rachel. They then discuss how Rachel and Porsche are jelaous of Cassi. Jordan says Rachel asked her if Jeff hangs out with Cassi alot. Jordan thinks Rachel asked that because she thinks Cassi wants to get the girls out so she will get all the boys. Big Brother cuts the to the we’ll be right back…. 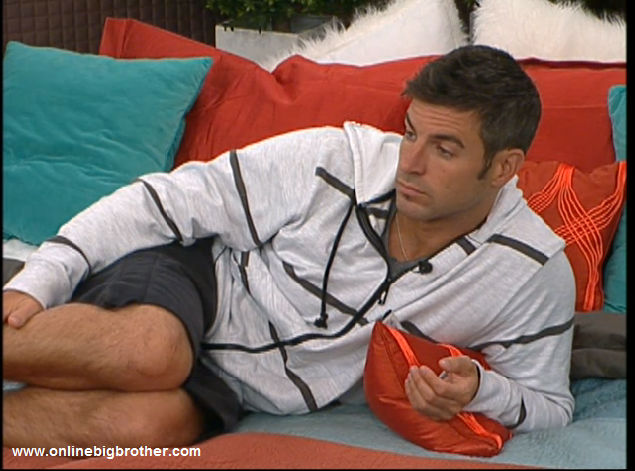 11:40am – 12am When the live feeds come back, Jeff Jordan, Porsche and Kalia are in the candy room getting dressed. They are trying to decide what to wear for the Have/HaveNot competition. Production told them to wear active wear for the competition. Dani comes in and says that she really doesn’t give a crap what she wears. Rachel says well thats a good attitude to have. Rachel asks Dani if she managed to talk to Dominic last night. Dani says yeah she did. Rachel starts talking about her dreams. Porsche complains that she doesn’t have any other than her skinny that she can wear that production did take away. All the are getting dressed and stretching for the competition. Jordan was called to the diary room to go over the rules. In the kitchen Shelly, Brendon, Adam and Dominic are waiting around. Shelly says that if Porsche says one smart thing about the havenots I will knock her out ..she always says something about what they can or can’t do.. I promise you I will make some drama today and knock her out! Brendon corners Rachel and tells her about how Shelly is talking about fighting Porsche if she says anything about the havenots. Brendon tells Rachel that she cant step in or say anything …because it will expose their alliance with Shelly. Rachel says she won’t. Brendon keeps insisting that she cant do anything… Rachel says that she has just been sleeping for the last 3hrs… Brendon tells Rachel that if she does it will put a huge rift in between him and her. Rachel gives Brendon a dirty look …Big Brother cuts the feeds to the TRIVIA screen… The are now competing in the have/havenot competition…. 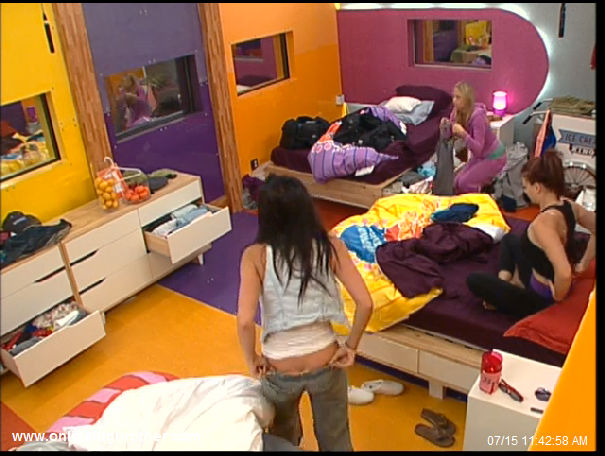 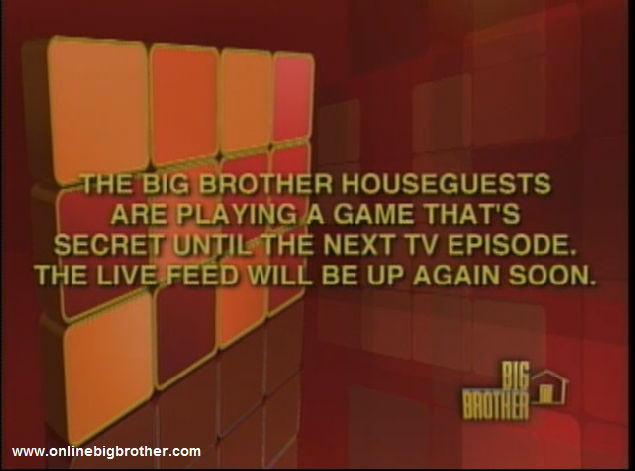 Maybe the competition involves a debate about raising the our governments ‘debt ceiling?” If niot a debate then a “pissing contest” between the vets and the newbies. Because if not, many of us US citizens, as of August 2, will be “Have-Noits, including our soldiers!

Nothing. It’s just politicians grand standing and morons fall for it.

So what you are saying is that by believeing everything your government tells you, you’rer a moron? So conversely, your saying if you DON’T believe what your government tells than you must be a “conspiracy-theorist?” So are you a MORON or a “GLENN BECKER?” Wait a minute, that an oxymoron!

The others yes bur not Shelly!

I’d rather see Rachel and Porsche as haves so they can continue to think their shit dont stink. Plus, it would allow them to keep getting drunk off of one glass of wine and pissing Brendon off. Who knows, maybe he’ll grow a pair and break up with her if she continues to act stupid.

yes the golden key people automatically get to be haves as they are not allowed to compete in ANY comps :)

I think ur right and they don’t even compete. Dani got her key after last wk’s have not comp but she wasn’t a have-not in the first place. But I think the golden key holders are exempt. I guess we’ll find out pretty soon.

Not to get off topic, but I just watched last night’s bbad on my dvr . that brenchel argument was why they were cast this year. That relationship is going to end in a murder-suicide. They need to get away from each other .

And I love her for it

so far Adam and Dom are on Slop

Love both, just not at the same time….. homemade jerky is the BLANK

Rachel was throwing up in the bushes, Shelly says they all got some in their mouth PLEASE elaborate on that Simon or Dawn