3:40pm Monet and Enzo are talking in the Have not room. Enzo says that he thinks Kathy would be a great replacement nomination …. ..then he says that Andrew would be an even better choice. Monet says they wont do that, ..they want to put up someone who’s guaranteed to stay. Enzo says that they better not put him up as a pawn because he will go after them next week. Enzo says that he wants HOH …but not just yet he wants to watch people and see what everyone is like and then get HOH, put two people up and back door someone. Enzo thinks what if they put up Matt or Lane?! Then Enzo says he’s confused. Brendon says it has to be Kathy. Enzo says I really want to see if they put up someone popular. Monet says that they will put up someone who will get more votes to stay than me. Monet says why don’t they put up Kristen …shes tight with them. Enzo says this is confusing …I don’t see no one else …it has to be Kathy. Enzo says because if Kathy goes up … we could.. .(and the feeds cut to the we will be right back screen. 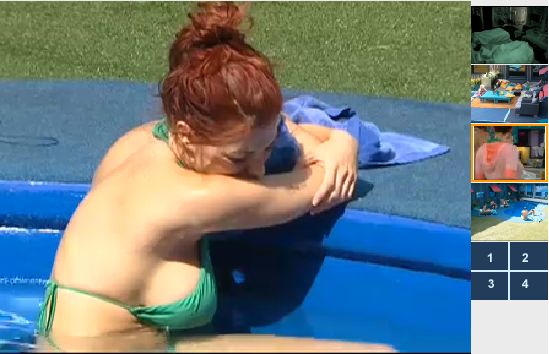 Andrew is asleep in the bedroom with his sunglasses on. Kristen and Hayden are in the lounge room talking about Rachel and Brendon. Kristen says that it is a good thing that Brendon and Rachel are the ones in spotlight …it takes the eyes off of them. Hayden tells Kristen that the Brendon and Rachel BB showmance is disgusting. Kristen laughs. Hayden asks if she agrees… and Kristen says yes. Hayden says that its just in bad taste. Ragan joins them in the lounge room. Hayden and Ragan start talking about about random stuff while Hayden and Ragan do sit-ups.

4pm Brendon and Rachel are laying in the HOH bed cuddling …and Big Brother tells her to cut it out. Rachel sits up smiles and asks knock what off …being cute? Rachel says I have all my clothes on …I’m being good. Brendon says what now they want to tell us what to do?! Brendon and Rachel are now taking a nap. Meanwhile in the storage room Hayden and Lane have a really brief conversation. Lane tells Hayden that Rachel told him he’s safe because they already have a deal not to put each other up. Hayden says he hasn’t gone up there yet to talk to them. When they walk out, Lane says he doesn’t care who goes up as long as the four of them are still here next week.

4:15pm Big Brother cuts the feeds and tells Brendon that he isnt allowed to take a nap in the HOH room. Rachel and Brendon leave and go down to the have not room. Rachel lays down on the floor and Brendon gets into the cot. Matt comes in and asks what is happening in here. Rachel says cuz its happening in here … why be a have ..when you can be a have notty…  Matt leaves.

4:30pm – 4:40pm Matt and Monet are in the kitchen talking about the results of the POV and what might happen.  Matt tells Monet that he told Rachel it is in her best interest to put up someone weak.  Monet says that she thinks they need to convince Rachel to nominate Andrew as the replacement.  Matt agrees.  Matt tells Monet says that his idea is that they all need to threaten Rachel and Brendon by saying if they are put up as a pawn, they will then put up one of them as pawn if they get HOH.  Monet says that she really hopes Rachel puts up Kathy. Matt says that Monet would have the votes to keep Monet if Kathy goes up.  Matt tells her that he told Rachel that if Rachel nominates someone …that they could then ask Rachel to be the pawn another time in the future. Matt tells Monet to go up to HOH and talk to Rachel and Brendon and to make sure she doesn’t threaten them too much.  Kathy and Andrew come into the kitchen and start killing all the ants with the bug spray… Kathy goes crazy with the spraying.

why be a have ..when you can be a have notty (naughty)

The above sentence from Roachel is evidence that Hayden is correct. The ‘showmance’ is disgusting.

he will probably be a “fluffer”, and clean her off

who else thinks “have notty” is starting to get really annoying??

This girl has got to get her head out of her twat and into the game. She is in the best possible position to do something to blow not only Alison’s mind, but the viewing audiences’ as well. She should get rid of her closeted boyfriend by putting him on the block. I think that if she were to this, she would show “Pussy Lips’ Brigade” that she here to win 500K and can “piss with the big boys” anytime. Janelle did it and not onlydid she win the game, but she also got the respect she deserved. (Janelle even shot down Dr.Evil and out played him).

Doesn’t she realize that guys like Brendon will come and go but the yearly interest earned on 500k can last a life time.

ILL WILL
Reply to  jimik60

your right she should do that but she’s an idiot

I thot Janelle came in 3rd both times….but won the 25,000 as America’s Choice……just sayin

This cast sucks. The guys are lame and so is the women. Ragan should man up and tell them lets get rid of all the strong men! I think everybody has issues with this season of bb because it’s so boring! bring ronnie back , he will make it fun,lol

Who Dat
Reply to  ihatebigbrother

They need a Celebrity Big Brother and a Big Brother: Heroes vs Villains like Survivor just did.

Hayden and Kristen are fraternal twins. Am I the only one that can see that? No sex talk, no talk about their pasts, only game talk between them. They are the LIFE LONG couple the sabatore warned about in week one. It is becoming more and more obvious.

no way Kristen and Hayden are lifelong friends… On After Dark when Hayden got hid HOH room they asked him what the rope was for and he said that he knows how to use one and use to ride horses… So does Lane… Also.. Hayden’s sister lives in the same town as Lane… Notice… they don’t talk to often and when they do… it’s only in a group setting… I could be wrong… but I i have really been watching this close hust to see if I am actually right for one… I only caught it because I DVR’ed it and had to rewind when they said it…

I think Brit and Kathy look alike! They are both from AR! Could b mother and daughter!

ILL WILL
Reply to  okie72

yeah they do look like they can be brother and sister

no way they are related

i said they were brother and sister last week

I think it is Hayden and Lane that are brothers. If you look closely at their physical features, they are sooo similar it is ridiculous! The facial features, the body builds…all of it! If Hayden didn’t have all of that hair in his face, everyone would be on it “like stink on manure” :-)

Kathy and Brit could pass for mother and daughter! Both from AR!

I said from day one that Hayden ^ Kristen are twin’s.

twins don’t make out. Kristin and Andrew are brother and sister. (I think)