4:50pm Big Brother calls off the out door lockdown.  Hayden, Matt and Lane are talking up in HOH room. Matt asks them if they want Kathy to go up as the replacement.  Lane and Hayden both say yes. Matt says that they should both to tell Brendon and Rachel that the best option is to put up a weak player as the pawn. Lane says that one of the people from the brigade has to win the next HOH.  They all agree that it was crazy that Britney won the POV.  Matt telling Hayden and Lane that he is sure they are fine from his talks with Brendon and Rachel.  They all leave the HOH room.

Brendon and Hayden have a conversation in the HOH room.  Hayden asks Brendon if he knows what they are going to do with the nomination.  Hayden tells Brendon that they should really put up someone who is weak strong because they won’t end up going home and also they would not come after them. Brendon tells Hayden that they are thinking about nominating Matt as the replacement nominee.  Brendon says that Matt has been acting sneaky and paranoid. Hayden says that he agrees and then asks if Matt is going up as just a pawn or …. Brendon say oh yeah, yeah, just a pawn.  Brendon says that he hopes Matt won’t be upset about it. 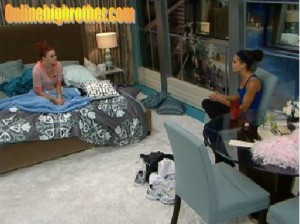 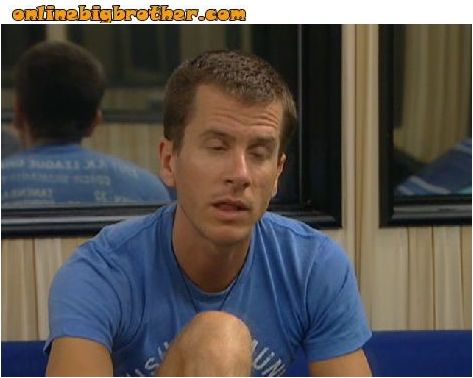 Rachel says where would you see the next few weeks going …if Andrew goes this week .. who goes next week…    Monet says Kristen.  Rachel says I like Kristen.  Monet back peddles and says Ummm I just don’t know where she stands in the house.  Rachel says yeah I just don’t know where she stands either.  Rachel says that she is really considering putting Andrew up but is scared that there are still 3 more weeks till people start getting voted into the jury.  Rachel tells Monet that no one in the house wants to make deals with them or to align with them because they are viewed as a threat.  Rachel tells Monet that she has already considered what will happen after the show with her and Brendon.  And that she would do anything for him.  Rachel says if we save you and Britney and you come after us …. That is just not cool … that even if you get out one of us ..there is still the other one …and that is not cool.  Rachel tells Monet that if they do make this deal that after they have to start playing chess not checkers… that they need to plan out their next moves.  Rachel tells her that she needs time to think things over but that she will let her know where her head is at before the POV ceremony.  Monet thanks her for talking to her and the leave the HOH room… the feeds then cut out to the we will be right back screen.

5:55pm – 6:05pm Britney and Monet are talking in the backyard. Monet tells Britney that Rachel is considering making a deal with them and that she may put up Andrew but that she will let Monet know what she is going to do. Monet says that Rachel thinks the POV is tomorrow. Britney then recites off the names of this seasons POV winners and tells Monet that they need to recite them every day so that they remember them for the memory competition. They head into the kitchen to make protein shakes to freeze …like ice cream.. The feeds cut to the we will be right back screen…

speaking from a man’s point of view, brendon needs of get the ass b4 the show ends or it’s not worth dragging her along, she’s from Vegas in no way will she even waste her time with a dweeb like brendon on the outside, the boy is being used for protection

All the dumb azz women should get together and vote all the men out until there gone!

no way. I do not want an all women show unless they give them a whole lot of alcohol and we get some lesbian action on the go because who wants girls talking about their periods and having a love in. This isn’t Sunday school.

A whole lot of alcohol always made Sunday School a whole lot more fun for me. But, I don’t know about this group on the show. Maybe mud wrestling?

Hey BBGrandma was also wondering where you be at? I am glad your back. Loved your comments from last year – keep them coming.

GET RID OF THE WHOLE DAM CAST THEN! WHEN THEY DRINK THERE STILL BORING! Booze is not helping one bit

I agree this big brother is sucking already. Is this the best cast you could find big brother. Ok why each season all the women do the mens dirty work and vote out each other and then become easy pickings for the men once the dirty work is done.Rachael says this one has an alliance and this one has an alliance but duh don’t u and Brendon have an alliance. This big brother is sucking majorly. I will be so glad when this fake icky showmance is over. I mean honestly you come into a house and start freaking a dude u just met. show her and his real character.Lordy have mercy..I hope Rachael, Brendon,kathy(The butt kisser) and Brittney all just leaveeeeee

Oh my goodness. I really hope Rachel is pretending to be dumb for the sake of the game.

Ok now I like the brigade boys…..matt is a pawnand have at least. 5 votes good thinking matt…bye bye mean girl monet and ur fake promises….this was another good hoh week if no one does a annie and evict themselvees..lol

I’m scared. It might not work and I’ll lose my Matt.

This was a terrible week. Why keep those four in the house? Those four stay playing pool everynight being shady and then they gossip to rest of the house to try to throw them off. I mean If they turn on the cameras in the hoh they would notice it instead of lip locking. The dumbest cast! The most boring cast!

If Brendon is, or is not, into women and he is doing all that stuff with that ugly, plastic alien just to win the game, then he is the bravest BB player in history.