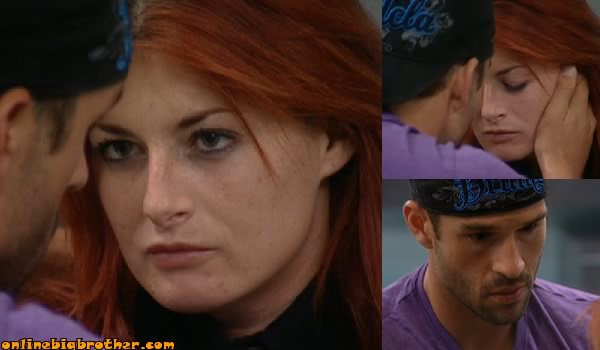 6:25pm Rachel and Brendon start talking about what they should do whether to keep Monet or Matt. Rachel says she that she doesn’t trust Monet, but that the girls will come after others. Brendon says Monet is first and then Matt next week. Brendon says that maybe he will wait to call him out until next week. Rachel says she hates when Brendon talks about Britney like he does and they are going be enemies, but.. (and the feeds cut out). Rachel asks the problem is too, what the BLANK is going on. Brendon says just say she came over to apologize, we can make the votes happen for sure because Matt is such a  BLANK rat. Rachel says I called Annie, I BLANK called Matt. I don’t think that Britney is trustworthy; I think she will eventually come after us. If Monet stays, the house is going to split. If Monet goes and everyone finds out about Matt, that limits their entire thing. We need to talk to Ragan. Brendon says that this is a really big decision and will ultimately effect the next 3 weeks. Rachel says I think Matt and Britney will go after Andrew and Kristen. It forces Hayden to our side. Brendon says I can’t believe Matt. Brendon says lets go through scenario where we keep Monet here, Matt goes home. I think we are safe with Enzo and Lane this week, safe with Britney and Monet. Rachel says that they will take out 2 of our biggest allies, Kristen and Andrew. Brendon says that its a game of chess, you have to sacrifice pawns. You have to figure out which pawns to sacrifice. Rachel says that Britney just proved herself to us, by saying she is not going tell Monet who is her best friend. Brendon says we have to see if it actually sticks. Rachel says I believe her and she said that if Monet is going home to please tell her. Rachel says I think he is so stupid to make a move like that, he must have thought that Britney really hates me.

Matt and Enzo are talking by the pool. Matt says they are all going to need therapy when they get out. Enzo says this will be fun to watch on TV. Matt is just staring over at Brendon and Rachel. Matt says he has to pack in a couple of days and that sucks. Enzo gets out of the hot tub Matt wanders between hot tub and Pool Table where Hayden, Monet, Rachel, and Lane are playing pool. Enzo tries out the elliptical.. Matt has no idea he was just thrown under the bus. Lane and Matt are tossing a ball around. Lane lobs it over the wall. Lane says when you love something sometimes you have to set it free.

so the dumb dumb are gonna keep monet and continue to seal their fate? SWEET next week rachel the following week brendon then BB gets better

Bringrussellback
Reply to  ILL WILL

I know, how pathetic is that every year they fall for the ” enemy houseguest that turns into a nice person ” with the right gossip at the right moment??????

So is there any chance there will be a solid BBAD tonight,luckily I have a DVR pretty much fast forwarded through all of last night.

BLANK hit the fan big time? Let’s see a post reunion show comprised of all the big fans on this site! AG can invite you all for 10 gory days of backstabbing, ball crushing fun in the post-BB12 house. Invited? Simon of course, and Colette Lala , and would love to see Rockstar, Jimik60, BB Grandma, Enzosshineydome and several others who have the real personalities here!

Well, I have never passed on a party! Count me in!

HOH called the meeting right? then why is brendon up there too? LMFAO the “powertrip” has to be taken out next week

ihatebigbrother
Reply to  ILL WILL

Good for ragan! I wonder what scary kathy was doing?lmao