7:00pm HOH rachel, Brendon, Ragan and Kathy Rachel explains everything that is going on with Matt to them. Kathy says she never heard Matt say that Kristen is voting to keep Monet but Matt was acting strange. Ragan doesn’t believe that matt said those things. He says he knows Matt and he thinks it’s Brit up to her tricks. Ragan points out that he has talked to matt the most in the house and he has never heard Matt Trash talk anyone before. Ragan tells Rachel to have a house meeting to clear it all up. Brendon chimes in and says that a meeting at this time is not the best idea. Rachel interrupts Brendon saying that she appreciates Ragan’s opinion and insight but she wants to get all the facts straight first before she does this. Matt says that calling people up one at a time isn’t the best approach.. again ragan says that Matt did act strange and suspicious but he really doesn’t think this story is 100% true. Ragan explains to them how campaigning goes… “Teh person on the block that klnows they don’t have the votes has only one option or go home LIE…!”

They decide to call in Matt first. Ragan tells Rachel to not start this with accusations to start it with fact she needs to be diplomatic. They head downstairs to start the meeting. Rachel says she knows everyone is after here now and she thinks there is a person playing both sides and she wants to get to the bottom of it.

Ragan chimes in before the meeting begins that there is no acusations just facts. rachel begins by saying that Matt went up as a pawn to make sure that Monet went home. Brit chimes in that Matt told her that he was blindsided by you not that he knew he was going up

Matt says that he felt that Rachel was strong arming all the houseguests, “you told us all that becuase your HOH you decide who goes home.. Your just HOH you don’t control everyone” Rachel denies being a bully she just think the week 2 HOH’s choice should be honored (WHY?) Matt “you did so bully us all 6 of the people up there were bullied by you and if they didn’t listen to you, you would of threaten to put them up” Brit chimes in “who said that Kristen was keeping Monet?” nobody answers. Brendon asks MAtt straight up if he was going to put Brendon and Rachel u pas revenge. Matt says he wouldn’t of put them up for revenge he doesn’t play on revenge. Matt explains if he put up Rachel and Brendon it would be because they are playing together and are a very strong force in the game. Matt turns to Brit and says he didn’t know he was going up and he never started the rumor that Kristen was flipping. Ragan says that Matt did volunteer but ins’t sure that he was bullied by Rachel. Matt defends himself and tells the group that Rachel and Brendon have been on a power trip all week and if people didn’t see that they were lieing. 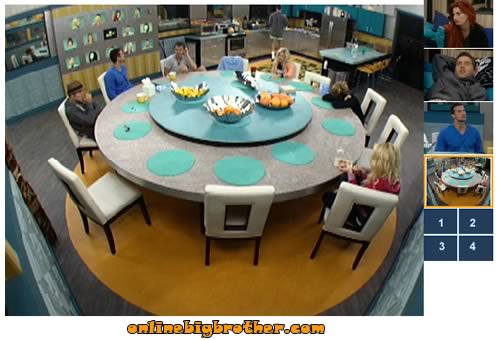 Matt tells them that it’s not a stretch that Brendon and rachel will be targets next week.. they are powerful.. look how they handled that meeting the other night. Rachel asks Enzo and Lane if Matt was surprised when he went up, Enzo’s half asleep says he doesn’t have a clue. Brendon suggests that maybe Matt wanted a favor if he volunteered to go up. Matt “no i didn’t, talk to Ragan he’ll confirm that”. rachel tells MAtt that she just wants everything out in the open she just wants to play a honest game. Matt “If you want everything in the open why the fuck did you call a secret meeting that night and lie about the toilet so Hayden would come up”… “Look i have caught you in 3 lies you come in here being all holy as hell taking the high road when your the one doing all the sneaky lieing” Rachel defends saying she never wanted to call this meeting but didn’t like what was being said and wanted the truth.

So when did this fight end. 7 till…

IT’S GETTING A LITTLE FUN!LOL.

yes it sure is. might make for some interesting watching for awhile….

Kathy and Kristen is keeping their annoying mouth shut for once.Matt is so stupid! I hope hayden gets caught for being a floater 2

honest game? who is rachel BSing???

it’s becoming more obvious brachel is just as malicious as anybody else they just hide it good.

WATCHING BBAD….SHE IS SOOO STUPID AND INSECURE. SHE REALLY THINKS THEIR RUNNING THE HOUSE. AND THEY RE DATING. SINCE WHEN ARE FAKE KISSES..ON HIS PART… AND GROPING UNDER THE COVERS DATING. AND MATT SHOULD STOP DRINKI NG HE S STARTING TO SOUND STUPID TOO

Finally something interesting is happening in the house. i think they might have actually started playing the game

Matt just dug a deep hole for himself. By starting a big thing now he’s sure to go home. Honostly Monet is a better house guest and should stay. She doesn’t even need to campaign anymore matt is screwed. He’s boring anyway.Bye Matt!

I have to go throw up!

I’m going to be pissed if they keep monet….ergh

Rachel is a moron, Monet and Brit will be the first ones to go gunning for her…..Ragan could keep Matt at bay, from putting up Rachel or Brendon….Since ragan is tight with them…Get rid of monet

HOW OLD IS RACHAEL …SHE S ACTING ABOUT 16, OH NOW SHE S CRYING . PLEASE SOMEONE SHOOT HER IN ONE OF HER FAKE BOOBS.

Rachael is so beyond annoying.

If she isn’t making me gag when making kissy face with Brandon, she is making me want to punch myself in the nuts with here ridiculous non-stop laughing or just talking, or she is having an hour-plus discussion with Matt proving just how dumb she is making me want to smash the head of whoever controls the camera for BBAD to make them switch to anything else, even the fish tank would be better!

What was that going on w britney and andrew at the beginning of AD???Are they in a secret alliance? i thought she hated him and wanted him out, but now she is telling him everything and hugging him (?) Someone PLEASE fill me in…..

Wow. Matt said that to Rachel while he’s nominated for eviction? Not smart at all. But thx, Matt, for making it a lil bit interesting. Have another drink plz!

Matt had the votes wrapped up probably 8-1 or 7-2 before this fight…..He just made it 5-4 after the fight….I still think Matt stays…..If Rachel/Brendon had any sense, they would work hard to send Monet home, they are going to feel Monet’s wrath of revenge if the don’t…

OMG Rachel is so stupid. She says the same shit over and over. The Brigade is looking pretty good right now. And Ragen knows a lot about how BB works.

I dont think Rachel and Brendon r stupid they were tricked big time matt told them he wnted to go up andnow he is saying he nvr volunteered. He needs to shut his mouth and go home btw kristen is best and so hot haha

THANK GOD!! Something entertaining finally happened!! Watching this in flashback right now. Love it. Love Matt. But I think he may have just thrown himself to the wolves. Sad times.

Haydens turn next! I can’t wait. Hayden is a waste of space also.

Matt may have just become my favourite person in the house now.

Thank the sweet baby Jesus that something good has finally happened! On a different note I find it amusing how some of the houseguests think that they are going to get all sorts of opportunities after the show! I can however see Kathy getting a job endorsing one of the big mattress companies ( not beautyrest) because she does nothing but lay down! If the next hoh is a laying down on your lazy ass comp then she may surprize us all and come away with a win!!

And a very special thanks to “Enzo’s Shiny Dome” every time I see your screen name I giggle out loud!

Glad to be of service!

Can we just kick the HOH ho to the curb please??? Her vocabulary is 1st grade level and if she says “LIKE’ one more time I am going to suck a gas pipe and die so I don’t have to hear her ever again!

LMAO, yeah she needs to go. I can hardly stand to watch after dark right now because of her. Seriously cbs should’ve switched the camera after the third time she repeated herself. How long do we have to endure this shit? PLEASE someone get rid of her next week!

For those of you who THINK Matt is going anywhere, please remove the tin-foil caps. The guy is money thios week. The Brigade is large and in charge and Rachel is a looking like a fool at this point. WE SEE that she is running nothing. She doesn’t know she’s not been HOH all week. Her mistake was putting up Brittany and Monet. Once those two were up, the jig was up. ONE of those two were going home. Only way that mights changed is if Andrew went up. Other than that, the deal was sealed the moment the made her nominations.

For now they are in control. But things happen. The group that starts off with extreme power hardly ever lasts til the end. Last season by week 3 it looked like Jesse was good to the end, but that all changed in the blink of an eye. I just want the branchel showmance out. Preferably only one makes the jury house so that we don’t have to watch sappy jury house updates all summer long. One goes home, the other in sequester crying because they can’t be together. I want Brit to win HOH.

Exactly, you said it well. If they do not wake up, and I mean SOOOOOON, and take out the Brigade, it’s easy pickings after next week. The Brigade would then have unbreakble numbers ’til the final 5 or 6. See the logic?

I personally think one of the Brigade wins HOH the next 2, 3, or 4 outta the next 5 weeks. I ain’t being a homer either. MOST of the competitions have a physical element. Only Brendan is gonna excel in that department for “that side” of the house. Hayden is ULTRA athletic and I believe Matt can be too and even Lane. Sorry, the odds on fave to win it all this year comes out of the Brigade.

UNless productiuon becomes involved, as we know they can.