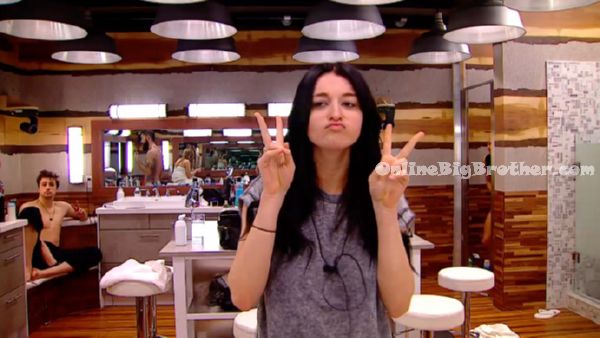 7:40am – 8:25am Big Brother wakes up the house guests. All of the house guests being to wake up and start getting ready for the day. Today there will be Andrew’s Nominations and the Power of Veto Competition.

Andrew, Kenny and Jon head to the kitchen to eat breakfast. Meanwhile in the bedroom Adel comments to Arlie that he is tired of being stressed in this game and refuses to be stressed any more. Alrie says he just wishes there was a single girl in the house. Kyle and Adel have a quick conversation in the storage room. Adel says we can’t leave Pj (Paul) hanging. We’ve got to shake the s**t out of this house! They’re walking around laughing in our face! We can’t let that!

In the war room – Scott, Allison and Nate are waking up. Their spy screens turn on and they immediately start trying to figure out what’s going on. Big Brother brings them french toast for breakfast. Scott says which ever of us get into the house – the smartest thing you can do it get close to Kenny and Andrew. 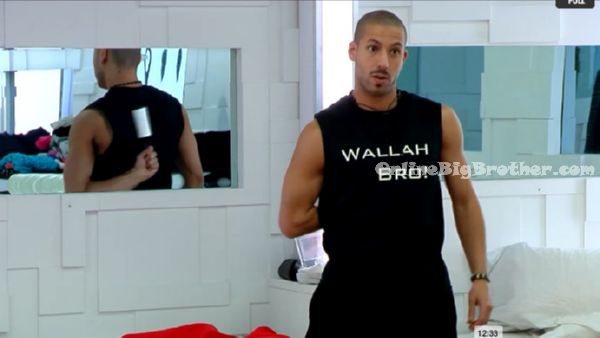 Morning wake up in the War Room: 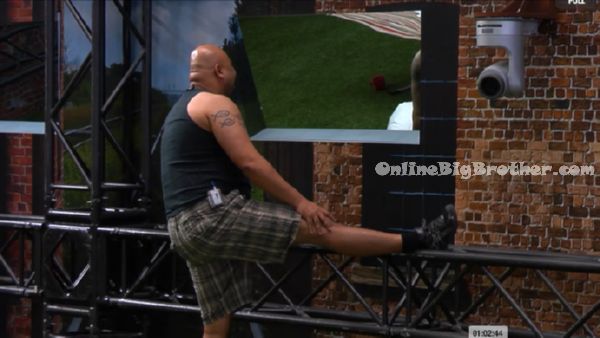 8:50am Paul comes into the living room and says he (Andrew) just told me not to take it personally, it’s just a game! Paul, Kyle and Adel head out to the backyard to workout. Paul says I want the POV to come down to me and the HOH, dude! That would be epic dude!

9am – 9:10am Big Brother blocks the feeds. The nomination ceremony is likely happening right now.. 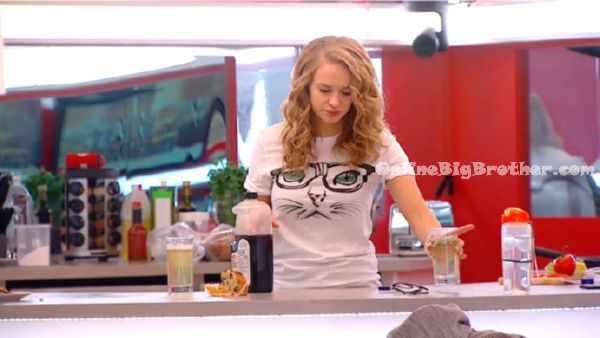 9:35am – 10:10am While the other 4 cams are blocked for the nomination ceremony, the 5th cam is on the war room. Allison is doing her hair while they chat about random things. Allison comments on how before their spy screens turned off they saw all the house guests head out into the backyard except for Andrew. Scott says that if he gets into the Big Brother house he is going to do impersonations of Rachel, Janelle and Britney. He says he has all the wigs and looks ready to do them. 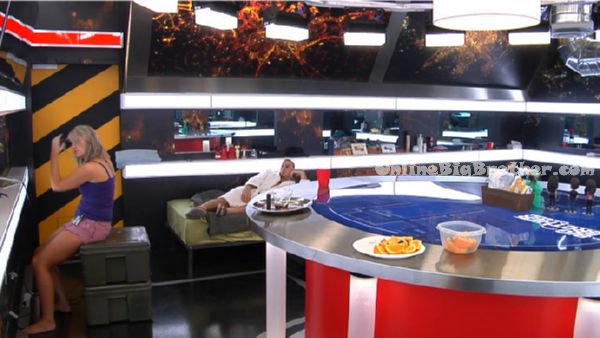 11:45am – 12:20am The war room crew are chatting about random things and eating chips. Scott is building a stage for the bobble head dolls. Nate and Allison start tossing cheerios. 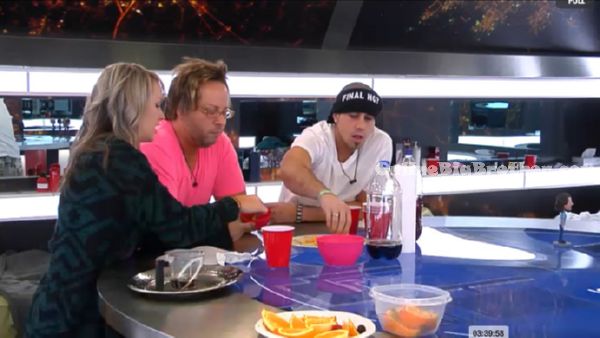 12:45pm – 1:30pm Big Brother blocks the live feeds on the war room camera. All 5 feeds are blocked. 1:15pm The war room cam comes back on and the 3 are eating the lunch that big brother brought them. Scott says something major is going on ..no telies. The conversation turns to talking about pick-up lines.

I’d wish BB would put together a “recap” of what happened in the first days, before the live feeds went on air.
All the first encounters and getting to know each other: what did they say their job was? Did anyone ask Kenny if he’s going to shave his beard at some point? etc.
All those interesting points have already been adressed in the house before we first see them, and it immediately starts with “business as usual” for us.
That’s a big loss imo. Makes it all seem far more sterile than it could be.

someone
Reply to  Johhny (the European one!)

yeah i get the feeling that they wanted to make it so eventful in the first couple of episodes it led them to not being able to fit the usual getting to know everyone part of big brother that we’re all used to seeing in the usa version. hopefully all these twists don’t take over every aspect of the game every week so that we don’t get to know the players…

Simon and Dawg, could you give the link to the 5th camera? Theres only 4 cameras in the link batch you posted.

I worry ’bout twists. Pls, no phonecall HoH, no Canada saves, no one gets back in.
BUT –
A double HoH? Haha! 1st & 2nd in the Comp. Share the HoH room. 1 Nom each.
A midweek Half Not Escape Comp – havenots compete – winner names a replacement and gets out.
Or the non-havenots compete, last place goes in, has to choose who escapes.
A reward task – for booze! BUT – only the top half of competitors get it.
A week with NO PoV.
Probably crazy. I’m expecting more “audience votes” stuff. Don’t like it.

I hope that the secret house guest gets some kind of immunity when they enter the house, because they will be instant targets…

This depends. Would they be smart enough to not mention that they could see the other HGs every move? Or just pretend they were going in blind

I sure hope Dawg will be the mystery houseguest voted to enter the house.

GREAT! We just need to fly Dawg from Vancouver to Toronto.. Dawg get your sh!t packed?

I don’t think Arlie got any before he left. I’m sure his downfall will be that he thinks with his ****

The feeds will likely be blocked all day. The girls should start a rumour that Kenny is secretly attracted to Andrew.

feeds were back for a few minutes, and Paul started to have a “confrontation?” with Sabrina, and they cut the feeds again! aaarghhh!
So apparently, feeds are being cut when it’s secret AND when it’s too interesting.
That’s a bummer.
🙁
Cam 5 works, so we can see 3 guys live-commenting, since they get to see the feed! Life is so unfair! T-T

Thanks for the quick video, Dawg! You da man!
I watched the bathroom scene again, and I’m starting to get the impression that Andrew just went for it and nominated both of his main targets: Paul AND Kyle.
I HATE that we don’t get to see what’s happening. They even cut the feed from the War Room when they asked for a bathroom break. The feeds are really frustrating, I don’t get why BBCAN does that to us… on a saturday! That’s going to drive people away from watching.

Johhny (the European one!)
Reply to  Name

Your welcome! It is very frustrating how much of the feeds are blocked especially when there is drama in the house. The feeds for cams 1-4 will likely be blocked most of today with the POV happening some time today.

Just glad we don’t have to see Emmett and Jillian suck each others face all day long.

What you don’t miss the milkmancing? lol