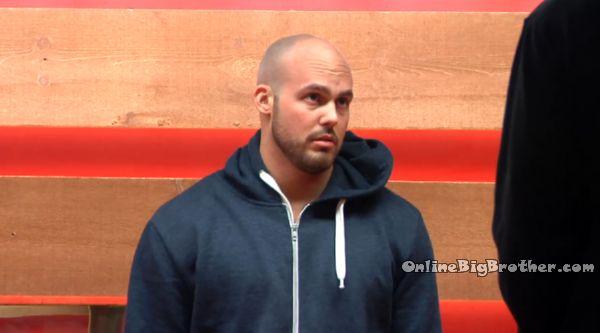 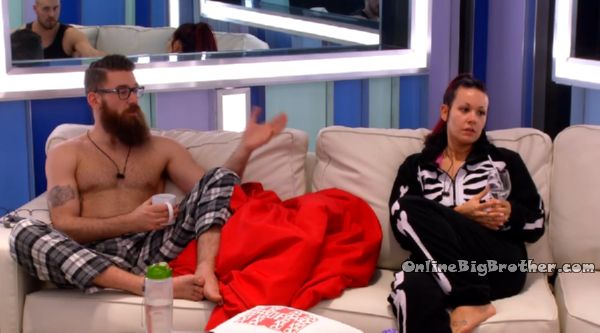 Andrew tells her Paul and Neda are going up tomorrow and Neda is the pawn. If they win POV they will use it.
Sarah – “We’re going to backdoor kyle if Paul comes off”
Andrew: “Ya we are going to backdoor Kyle”
They all agree Kyle is a more dangerous player, Kenny adds that getting rid of Paul isn’t off the table brings up what would they do if Kyle uses the POV to save Paul. Andrew says they will put up one of the girls like Heather.

Sarah warns them they are the top threats for the girls.

IKA says that Paul said something inappropriate. Kenny and Andrew really want her to tell them what Paul said. After some convincing she agree to tell them as long as Andrew doesn’t repeat it.
Ika: “He said you (Andrew) were a racist and a sexist” She explains that Paul is really grasping at straws because the things Andrew said were not a big deal.

Feeds cut..
When we come back Sabrina is in the room and IKA is giving Andrew sh!t for just telling Sabrina about Paul comments about Andrew. 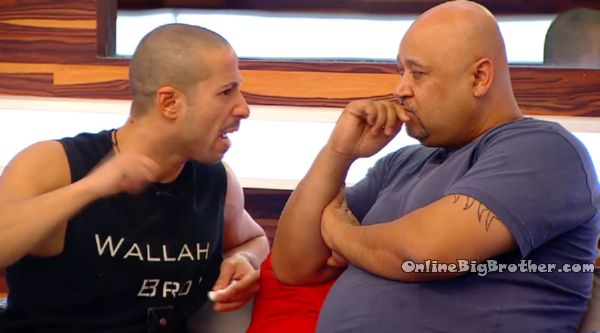 Adel – If you go up you have to win veto
Adel – they don’t give a f** about you me and kyle.. they cornered me ..
Kyle joins them

Paul – if any of you two go up i’m going to use veto and save you otherwise they are going to pick us off one by one. 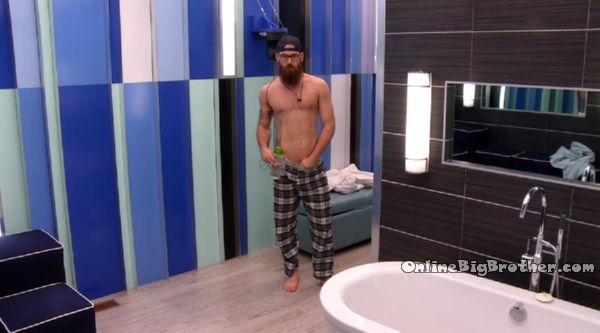 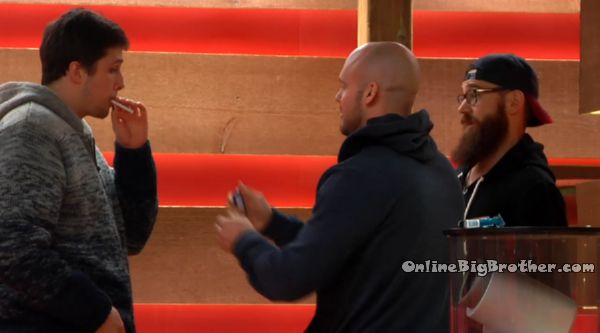 Andrew and Kenny are now wanting to take out Paul. Both of them are pissed by Paul using the race card on Andrew and trying to “Mess up his sh1t outside the house”

Jon joins them. They fill him in on PAul calling Andrew a racist. They agree that Paul has to go . Andrew says Kenny wants to backdoor him but Andrew is just going to put him straight up. Andrew isn’t worried that the POV will be used on Paul because everyone dislikes him. All they have to do is win the veto. Andrew is confident he’s going to win it again this week. 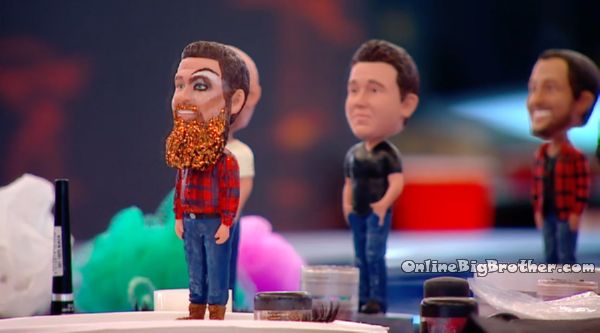 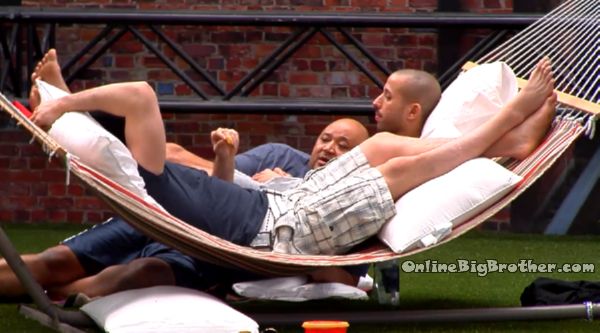 11:15pm Hammock Adel, Paul and Kyle They are trying to figure out who is running the girls alliance. Adel thinks it’s Sarah. Paul mentions that Andrew is putting up the two brown people in the house, IKA and himself. 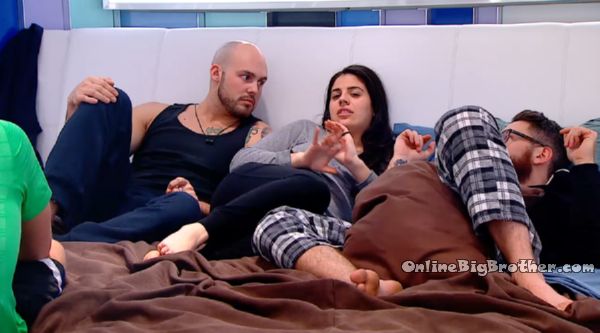 11:40pm HOH Andrew, Arlie, Sabrina and Kenny Andrew says he’s nominating Paul and letting him sweat it out all week. Andrew: “I want him to have the worst week of his life”.
They proceed to talk about how well Andrew handled Paul calling him a racist and how wrong it was for Paul to do.

11:45pm Scott give the Kenny bobble head a makeover 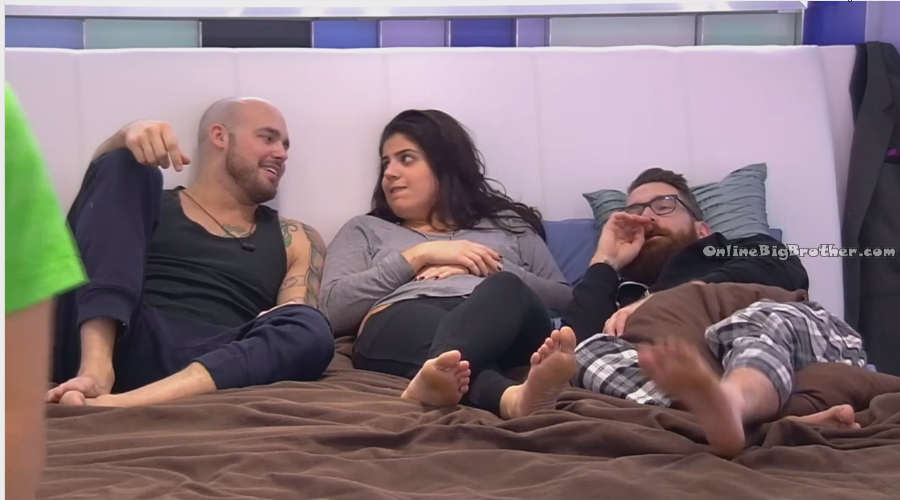 11:55pm HOH Arlie, Andrew, Sabrina and Kenny Andrew tells them he’s putting up Paul he’s going to win the veto and use it on Paul and backdoor Kyle. Kenny jumps in and says the plan was to get out Kyle all along. They start bringing up all the attributes Kyle has that make him a strong competitor in the game. (

12:05AM HOH Kenny and Andrew Feeds flash on for a minute with Kenny telling Andrew they need to take out Kyle this week but if Andrew is really riled up by Paulk calling him a racist than Kenny will support andrew in getting Paul out. 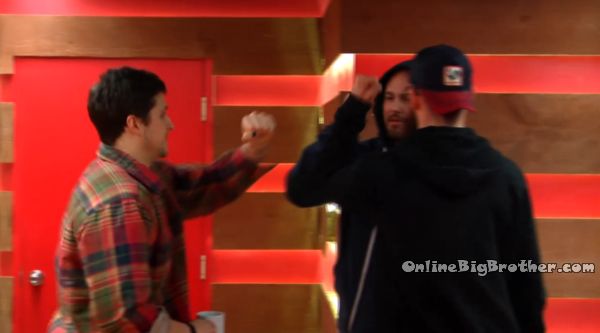 12:22am HotTub Smoking Kenny, Andrew and Jon
Kenny tells them that Kyle and Adel told Paul he’s getting nominated. Kenny says tomorrow is nominations and POV.

They agree that the three of them have to stick together.

12:50AM Andrew makes steak wraps for Sabrina, Arlie, Jon and himself.
Sabrina savagely attacks her wrap.

1:07am Living Room Jon, Andrew and Kenny. Speculating what type of Power of Veto competition they will have have tomorrow.

1:37AM everyone in bed on their way to sleep 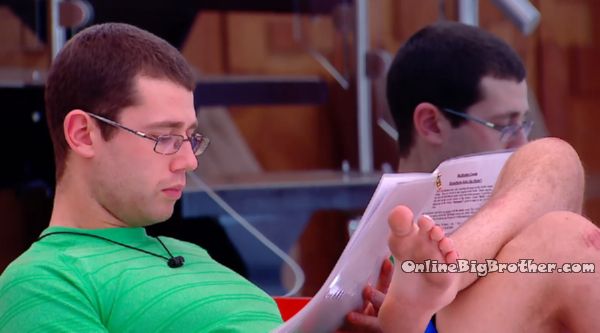 1:45AM Arlie talking to himself

Arlie: “This is the worst bro.. all I want to do is that”
Arlie: “I can’t believe she heard me”
Sounds like he was caught by the girls saying something that is damaging his game ( I believe the Diary room isn’t sound proofed enough) . He’s reading the rule book saying “OK hmmm OK hmm”

1:56AM IKA and sabrina are chatting in their bed while the rest of the houseguests are sleeping. Audio is off

I really don’t like this Paul/Kyle/Adel alliance. They’re probably the only ones in the house I don’t like.

I think Kenny/Andrew/Jon/Arlie are all in a good spot. For the girls, I actually think Sarah is playing a really good under the radar game so far while still being able to strategize with everyone. I’m also pulling for Neda.

Bring in Alison just for DAT A$$!

Paul = as much annoying but somehow way worst Elen!

Haha holy crap I LOVE this cast and I even love the Mystery HGs! They’re already stirring up so much drama and tension. Imagine if Paul wins the POV….that will be something.

wow first 5 seem really solid and so quiet. sarah and sabrina are in a really good spot since they are good with the girls alliance too. no one is saying jon’s name either and he’s checking in with every group! i like andrew and kenny, but they need to tone down the macho and keep nice with the girls, don’t let the power get to their heads this week. kyle is being such a dumbass aligning with adel and paul…

It took less than 24 hours since I posted about the 5 guy alliance in a great spot. ROFL I have to start giving these idiots 24 hours minimum.

So here is what the geniuses have cooked up. They have HOH and the girls still have numbers, dah! So what do the MENSA 3 come up with? You guessed it….. well actually Simon and Dawg gave it to us. Lets split the guys in half. I name the MENSA 3 as Andrew, Kenny and Jon, morons all at the moment. Lets say a miracle happens and Paul escapes eviction so they backdoor Kyle. What do you think the other guys do next week? They go to the girls and cut a deal. Even Kenny who I considered well positioned early isn’t making the jury.

Pauls an idiot with no game but they need a couple votes out of him before he goes. Clearly he doesn’t look like a threat to go anywhere. And why bother with Kyle? The MENSA 3 look like a group of 7th graders wanting to get rid of “a good looking guy” like themselves. A day ago I thought the girls in trouble now unless they mess up the guys are going to emplode. Reminds me a little of the start to BB USA 15 where I thought the girls in trouble, we get a switched vote and the girls turned out to be ruthless players. I really hope the chop the MENSA 3 up quickly as they richly deserve time back home with mommy.

Ugh, I hate when white people use the term “race card”. Paul said Andrew was racist and sexist when Paul was HOH, so he’s not using this as a defense mechanism.

What Andrew said was not racist (although he may be, time will tell) but it was ignorant and ignorance is just as bad as racism. Ironically, Andrew was initially planning to put Ika and Paul up though. And he Andrew will be putting two brown people up lol (Paul and Neda).

I would also just like to state that I don’t like anyone in this house, but any conversations with Abdel are entertaining (& I love that he hates Sabrina), and Neda and Ika’s convos are entertaining as well.

Unjustified accusations of racism are in themselves acts of racism. Calling somebody out for playing the race card is perfectly fine. It should be applauded.

Also, I HATE Kenny, he is scum.

1) He is condescending
2) His beard is gross
3) He’s gay and he’s stringing Rochelle(Rachelle?) along, That is so psychologically fucked up, he does not need to tell anyone his sexual orientation but he shouldn’t be flirting with a woman knowing he’s not into women.
4) I hate him and the members of his alliance:
Andrew – he’s so stupid but he thinks he’s brilliant and he is very transparent
Sabrina – she’s annoying, cocky, and in too many alliances. The day someone catches on to all her deals will make for very entertaining live feeds/TV.
Arlie – He looks like he could be a serial killer, he freaks me out.

you hate him because he’s gay? or because he is just stringing her along (which he can do because its a “GAME” and he’s playing it his way) ? You need to word it differently! It sounds homophobic, just a heads up. BTW Rachelle isn’t doing herself any favors by flirting with Kenny, it takes two to tango and to add on top of that she has a freaking boyfriend!!!

If he was straight and stringing her along would you feel the same way?

What did he say that he is being called racist/sexist? Anyone…..

He was referring to the ladies and “b*tches” ….?

The half not room looks like a good place to be nowadays.

Why do black chicks insist on being the fakest bit**es on the planet? Why don’t most of them just show their own hair? Weaves are the fakest phoniest thing to wear when you have hair.

Wow this is starting exactly like last years Big Brother. Think about it Paul is Suzette and Andrew is Tom lol

You’re right. I messed that up yesterday.. thanks for catching that!

I really dislike Kyle and Paul…

I don’t get the drag queens, Gary and Scot, not that I am racist, fill your boots guys. What’s the deal? Ratings? And the other guy commentating with Arisia is annoying as heck.

Sexuality is not a race