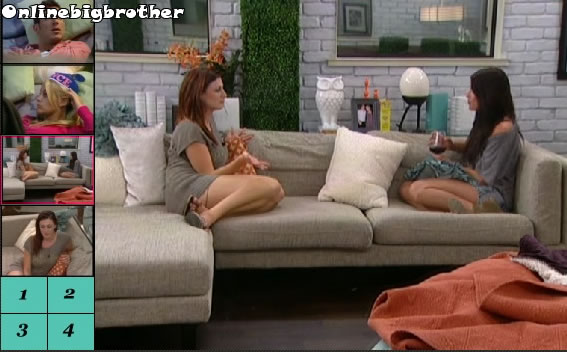 9:45pm HOH rachel/Dani rachel starts off by saying “Isn’t Brendon so much fun”. Dani amiles “Your serious this is how you’re pitching it to me”.

Rachel asks her what she is going to do if it’s a 3/3 split… Rachel thinks that it’ll be JJR to evict Shelly and KAP to evict BRendon. Dani says it puts her in a really tough position.. If she wants to keep Brendon she would rather convince Kalia then have to make the decision herself. Rachel wants to go to Kalia and pull her aside and offer her a fianl 4

Dani: “Kalia is going to play with her emotions.. I can talk to her though”. Rachel brings up that BRendon will win next weeks HOH and he will not put Kalia or Dani up. Dani says if it’s 3/3 and she evicts Shelly she basically screws herself with Kalia, Adam and POrsche. rachel points out that she gains BR. Dani knows but still thinks their is a bond with Brendon and JJ. Dani: “I want to help you guys out I’ll talk to Porsche and Kalia.. but in the end they will do what they want”
Dani: “I promise promise promise you if brendon goes I will have your back 100%… If Kalia gets another HOH I will convince her to not put you up”
Dani: “This does not leave this room I tell you this if brendon leaves I have your back 100% as long as you have mine” 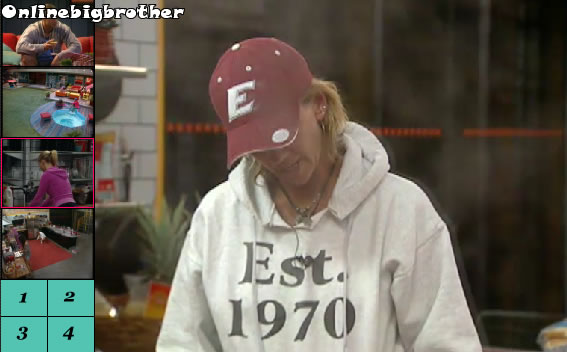 7:32pm Rachel and Brendon Rachel is saying they should campaign hard on Kalia, she thinks there is a chance. Rachel says Brendon needs to be polite and boast Kalia’s ego up (it worked for straight shooter). rachel adds if Brendon can get in good with Kalia he’ll be fine this week. Rachel: “Keep saying she’s a competitor .. keep telling her you respect her… keep saying that she got screwed for ther HOH” Brendon isn’t sure but Rachel keeps telling him he needs to tell Kalia that he’ll work with her till the end but be on opposite sides. (Sounds a lot like the deal they offered Dani) Brendon brings up talking to Porsche. Rachel: “BLANK Porsche she’s become my number one enemy”. Brendon says he’s sure that it’ll be a phsycial comp Rachel has a good chance to win it. rachel swears she won’t be flustered this time.. she’ll win it. Rachel wants Brendon to really start working Dani hard because she’s thinking it’ll be 3/3 split and Dani will be the final vote. 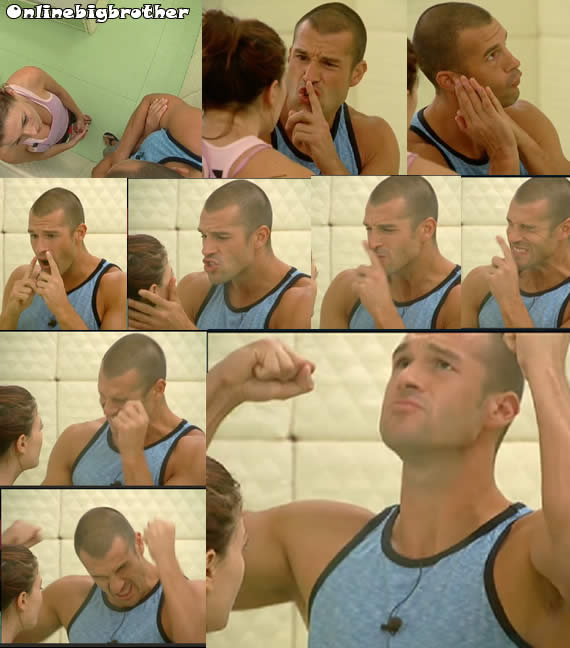 5:05pm Havenots Porsche and Rachel
Rachel tells P that BR are on her side and will not put her up. Prosche brings up that last week rachel wanted nothing to do with her and that is even after she voted for Brendon to stay. Porsche feels a bit pissed about that and it shows her that BR are with JJ.

Rachel: “I heard Shelly says she is going to put up POrsche and Adam… Jordan will confirm it.. Brendon and I are not coming after you ” Porsche just agreeing with everything. Porsche: “why are you campaigning for BRendon he should do it himself”. rachel says Brendon will she just wanted to talk to Porsche first.
Rachel: “brendon is a strong guy and he’s going to win the next HOH and he’ll protect you”..
Porsche: “last time I gave Brendon a vote look were that got me and that was only 2 weeks ago” Porsche brings up that Berndon is perhaps too strong of a player to keep in the game, he’s mental and physical. 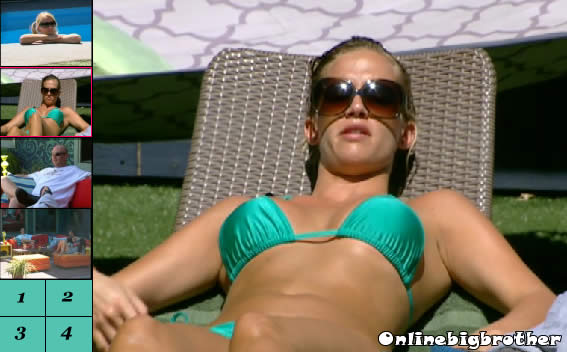 3:22pm Backyard
Dani “Is it me or are Porsche’s bottoms shrinking”
Shelly: ‘Steak or chicken”
Dani: “Chicken… I don’t really eat red meat..”
They talk about Turkey bacon, Dani explains how bad it is for you because they pump the turkeys full of hormones to get it to taste that way. She use to eat it a lot but then found out how it’s made. Shelly and Dani both agree that farmers markets are great, Shelly’s friend owns a hobby farm.

Both Shelly and Dani hate going to “clubs” where there’s young girls running around acting obnoxious. Shelly likes going somewhere she can sit down, smoke and have tequila. Dani says she sometimes will go to a small club if there’s a DJ there she likes. 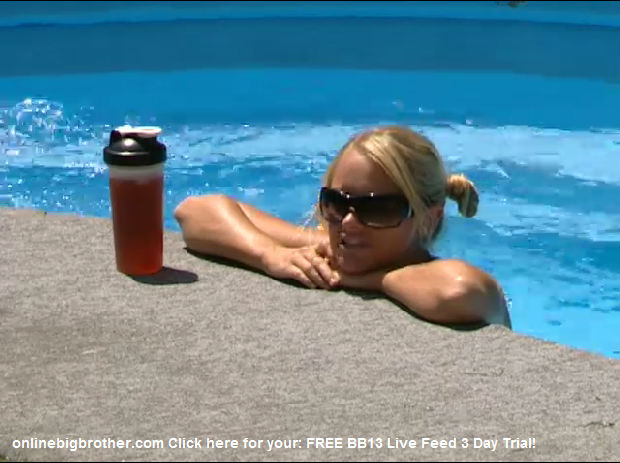 12:10pm – 12:35pm Jeff, Kalia and Porsche are now awake and moving around the house. Jordan is standing in the pool with her arms on the edge while talking to Shelly about Christmas and gifts. Over on the backyard couch, Jeff, Dani, Brendon, Adam Porsche and Kalia are talking about weird al and other random stuff. Kalia talks about how Jeff was snoring last night. Jeff says why didnt you wake me up? Kalia says that Jordan woke up and bumped you. Jeff says that Brendon was talking in his sleep. Brendon says that he does that some times and would wake up and see people standing around his bed. Kalia tries to move the bench in out of the sun. Jeff looks at her and asks what did you think you could get in 3 inches of shade. Kalia leaves and goes to sit in the shade by the pool. Jeff laughs and continues to make fun of how Kalia couldn’t figure out that there wasn’t enough shade there. Adam talks about how boring our cast is. Jeff says what do they want us to do ..build a space ship?! Brendon says we could! They start talking about the movie back to the future movie.

Big Brother 13 live feed Gallery for August 16th 2011. Each minute we take a series of screen captures from each Live Feed cam in the house and upload them to our Gallery every 10 minutes. This system runs 24/7 expect thousands and thousands of Screen Captures every day. Alerts are sent out via our Twitter account @BigBspoilers and Facebook page. 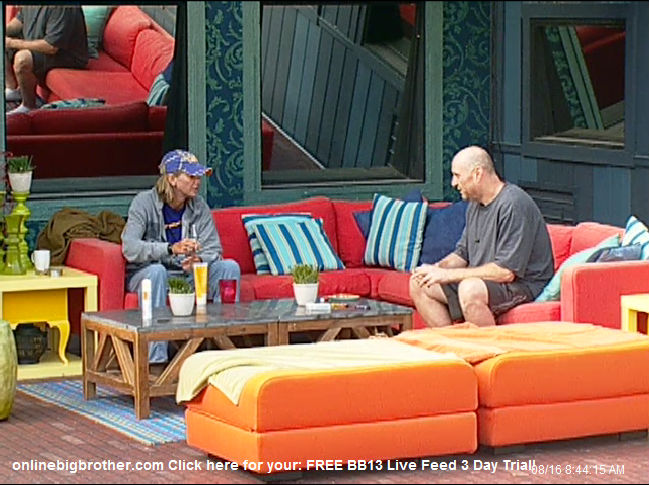 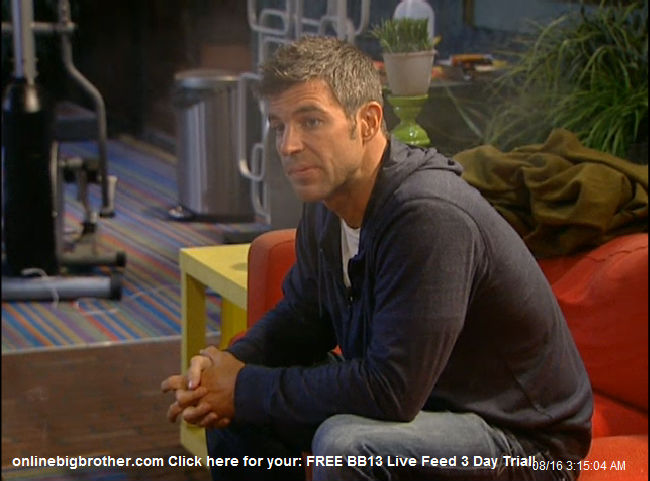 12am – 1:30am In the backyard Brendon, Adam and Jeff are playing pool. Jordan joins them and tells Jeff that she is going to bed because she need to take off her costume. Jeff gives her a kiss and she heads inside. The guys continue playing pool. Brendon tells Adam that he has beautiful balls down there set up on the end of the table. The guys all laugh. Jeff comments that Adam is all turned on now. Porsche, Shelly, Kalia and Dani head inside from the backyard couches. Shelly starts cleaning. Porsche and Kalia head to the bathroom. Kalia then grabs some food and heads back outside. Kalia and Dani are sitting on the backyard couches talking about how Dani just doesn’t talk with Jordan and how Jordan seems miserable in the house. Porsche joins them. Kalia starts talking about how she thinks Shelly and her husband Tony have a great life. Brendon, Rachel, and Adam join the girls after they finish up their pool game. They all talk about random stuff like Franklin the turtle, and their sleeping patterns in the house. They talk about how everyone sleeps all day. Dani asks how boring is this cast? Dani says that at least we can admit it, we don’t do anything.. we don’t even make up any games. They talk about having a hot dog eating contest tomorrow. Rachel asks Adam if the viewer complained about their season. Adam says no because there was lots of drama but that at the end it was boring because nothing was going on. Rachel asks if it was just the people that get the live feeds that were complaining.