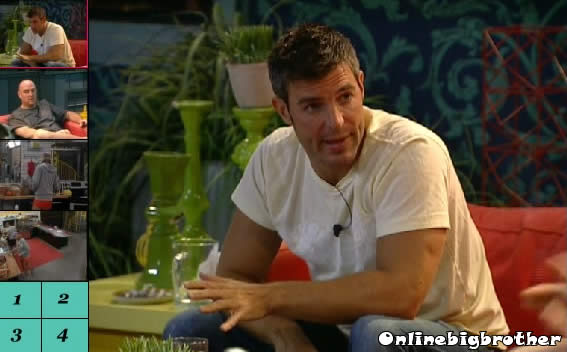 Adam is stressing they need to get Brendon out this week. Jordan: “If Rachel would have won (POV) then Jeff would have been the one to leave this week”

Shelly joins them Adam goes to check for booze.
Jeff tells her they are all going to vote Brendon out so Shelly should just play nice to everyone.
Shelly says her gut tells her that Dani wants JJ to trust her. Jordan is nervous about DK because they put Jeff up last week. Jeff knows Dani has to go he’s sure that once Brendon is gone Dani will come after him not Rachel. Jeff says that everyone in the house will discount Rachel once Brendon leaves the other side might not think of her as a threat which is bad for him. Jeff wants Shelly to know that they need to keep Rachel around for at least 2 weeks. He doesn’t want 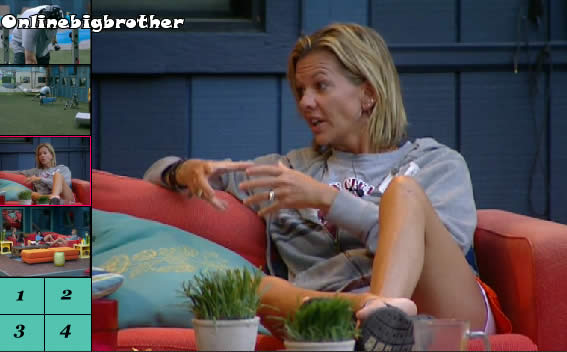 6:34pm DP talking about who is eating all the food. They are thinking that Kalia and Jeff are eating more than their share. They joke they need stockpile some select boxes of food. Porsche: “Ohh great and the pita chips are all gone today” Dani: “WHAT.. there was 2 bags yesterday.. ” Porsche: “Yup their all gone”. Porsche says they need to grab 1 of the 2 last boxes of triscuit and put it in the HOH. Dani mentions that they always got in trouble early for taking food but there’s some people in the house that take more. 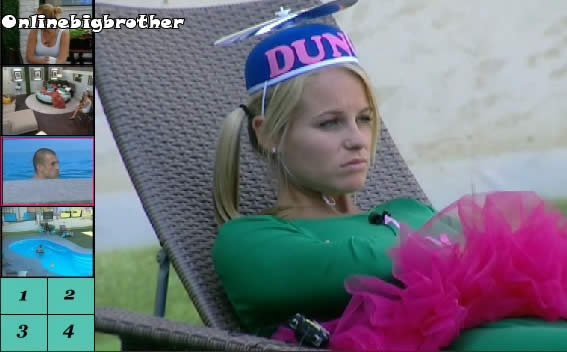 4:10pm Backyard JJBR BR are saying that they think prosche is their best chance. They know if Shelly wins HOH she will put up Prosche and Dani. rachel points out to JJ that if they can safe brendon this week the 4 of them will make it far in the game they will have the votes for the rest of the season. Jeff has no clue what Prosche is doing. Brendon: “I think trying to understand her at this point is beyond out ability”. Rachel asks them what will Adam do. Jeff is pretty sure adam will do whatever is good for his game. (ahh Jeff is shooting straight)
Rachel agrees she thinks if adam won rachel would be in danger. they all agress if Adam wins the HOH he wo’t have the balls to put dani up, he has a thing going with POrsche and Shelly. They all decide that Adam will target Kalia and Rachel.. their not sure who Adam would put up if the POV was used.

Jeff tells them they need to slow down and focus on thi week, they first need to win HOH becuase if they don’t one of them will be going home. brendon agress says he wants to think of how they need to keep him in the house.. Says he’s going to campiagn hard with Prosche. rachel is going to tell Porsche tongiht that Shelly is targeting her and POrsche. 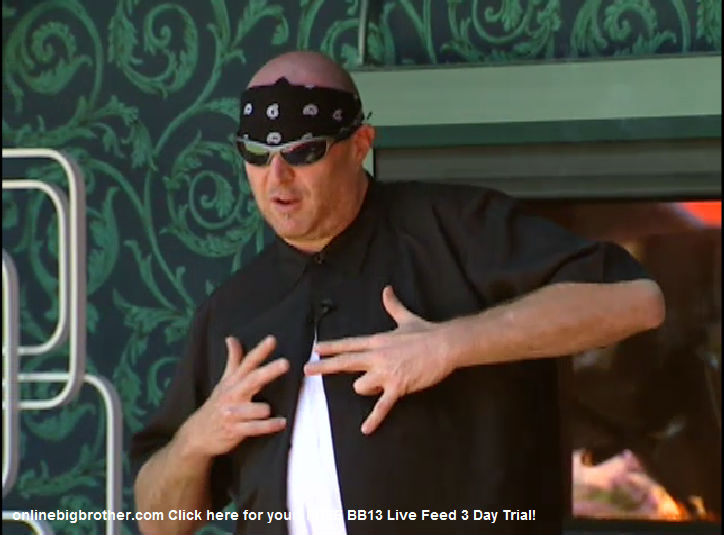 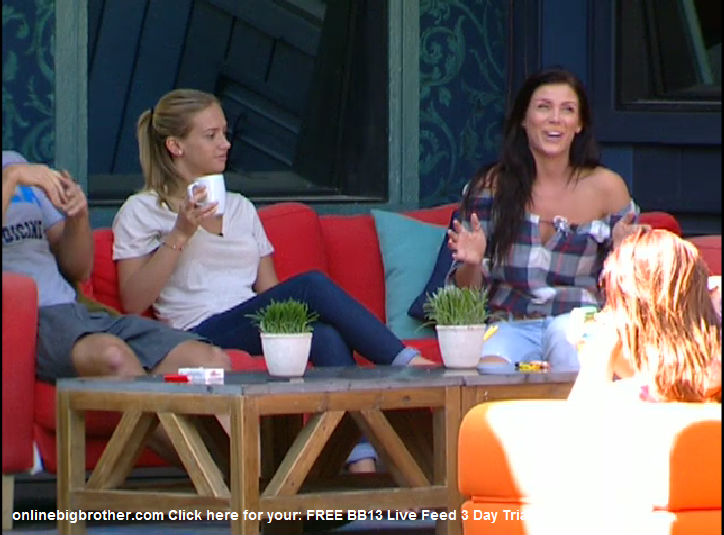 10:35am Porsche, Dani, Shelly and Adam are in the backyard talking on the couch. Porsche tells Dani that she is going to move into the metal bedroom so that there is less of a chance that she will get stabbed. Dani laughs. Rachel and Brendon come out. Dani compliments Rachel on her top. Rachel says that its supposed to be a dress. Dani says yeah for your vagina to hangout! The conversation changes to talking about Dominic and asking about his girlfriend outside the house. Dani tells a story about how these big tattooed guys came up to her and said that they watched her while they were in prison. Brendon tells a similar story about people recognizing Rachel and him from watching them in prison. Dani asks is that all they get to watch in prison ..big brother and Jerry Springer? Big Brother then cuts the live feeds to the TRIVIA screen … looks like the Power of Veto Ceremony is happening…
WATCH the houseguests LIVE on SuperPass!
Click here for your: FREE 3 Day TRIAL! 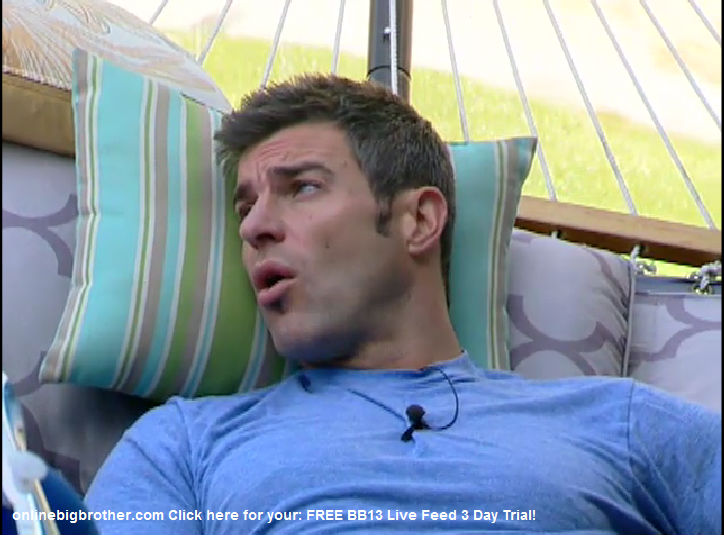 9:25am – 9:50am Big Brother wakes up the houseguests. When the feeds come back Shelly and Adam are in the backyard talking. Adam is practicing his lines for what to say for the POV meeting. Adam goes through the whole speech and then says that he chooses to not use the veto on Shelly and to use it on himself. Adam tells Shelly that she has his vote and that if Brendon is put up he will be voting him out. Adam says that if Rachel win HOH I will be the next target along with Dani if I vote him out. Shelly says that she will be because she embarrassed her out in front of everyone saying that Brendon didn’t defend her. Adam says get ready for some crying. Adam talks about how something is wrong if you can’t live without the other person for a week. Shelly talks about how Brendon and Rachel were making out right beside her last night. Adam says just give Brendon and Rachel a week in the jury house ..so they can have a f-ing Greek orgy in there. Shelly says that she is done with Rachel. Adam says if he wins HOH next week he is putting her up. Shelly says she will too. Adam saying that Rachel will pretty much want to go after Brendon’s gone. Adam says that it might not be bad though keeping her around another week. Adam says that she is a really nice girl when she wants to be, she just has this evil side. Shelly says that you can’t be turning that switch on and off, I’m done with her. Shelly says maybe when she has a child she will learn she can’t be spreading that venom. Shelly says that Rachel has a split personality. 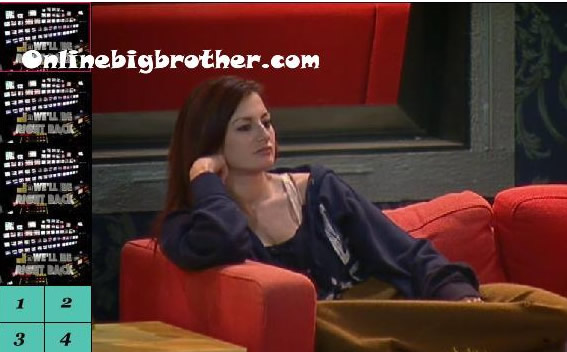 Big Brother 13 live feed Gallery for August 13th 2011. Each minute we take a series of screen captures from each Live Feed cam in the house and upload them to our Gallery every 10 minutes. This system runs 24/7 expect thousands and thousands of Screen Captures every day. Alerts are sent out via our Twitter account @BigBspoilers and Facebook page. 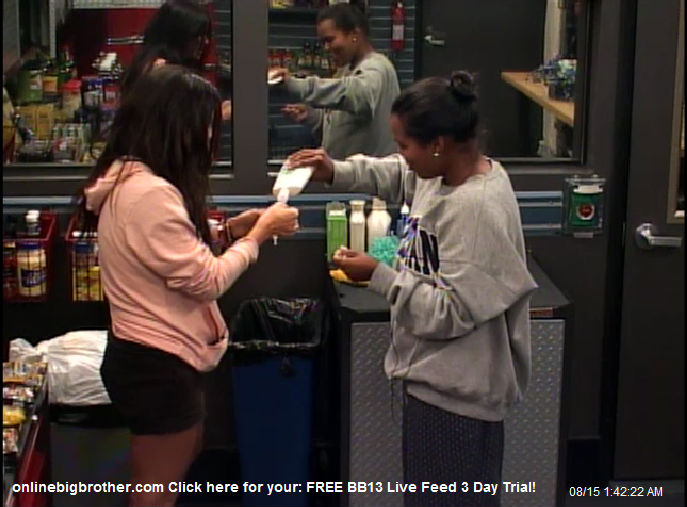 12:10am Out in the backyard, the guys are playing pool. Over on the backyard couch, Jordan starts talking about how Dani’s father looks so different in the picture up in HOH. Dani tells Jordan about Dick when he was young he used to model, he was such a good looking guy with a bone structure like mine. Dani says that Dick has smoked since he was 12 years old. Shelly says that he must have strong lungs. Shelly says that she doesn’t look like her parents and luckily for her daughter ..she looks like tony. Shelly says that he is way more handsome than I am, I got really lucky, he looks like a professional volleyball player. They ask her if he looks like Keith? Shelly asks who’s Keith? They all laugh. The houseguests continue to laugh and talk about random things. They talk about how when Jeff and Jordan came back last season on BB12 to host a competition and Brendon threw a ball that almost hit Jeff. Rachel says that it wasn’t even like that. Dani says that Janelle come on her season BB8 to host a competition and says that she whispered to them stuff and she wasn’t supposed to. Dani talks about how Eric was calling her Miss Piggy. Dani says that it would be nice to come out of this season and not be referred to as Dick’s daughter.