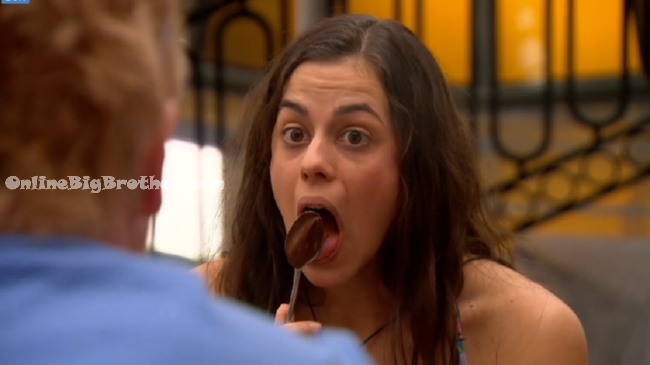 7:20pm Bruno and Graig
Bruno and Graig talking about Sindy being a lot cooler now. They agree she’s got to go.
Bruno – She knows she’s gone She’s not giving up.. she’s enjoying the time she has left”
Bruno points out that Jordan is ”Covering their weak spots”

Pilar joins them. They talk about Johnny Birthday party tonight at midnight. He turns 27.
She asks them what they have planned for Wednesday. Bruno says he’s voting with the house. Pilar agrees it’s the best plan.
Bruno – “The house should probably stay together”
pilar – It’s the only thing fair
Graig – I Can’t vote her out.. that’s just my opinion I’m staying out of this one
Bruno- i’m going with the house and from what I’ve heard the house is voting out sindy
Graig and Bruno point out that Sindy is one of the stronger girls in competitions. 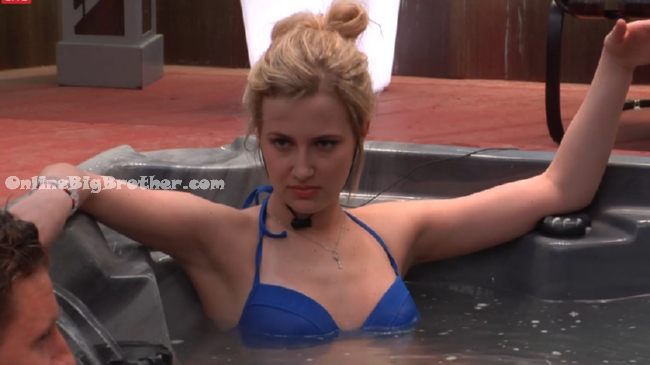 Bobby thinks Wednesday is a double eviction because it’s such a wacky season. Bruno thinks it’s a bit early for that to happen. they start speculating about what the HOH will be.

Bruno – Today is going to be a late night eh
Ashleigh – yup stay up for Johnny
The plan is to have a surprise birthday party in the HOH room for Johnny.
AShleigh comments on how gross the hot tub is says it’s not even enjoyable being in there. “This water is so gross.. I see little hairs floating around.. their short and brown “
Bruno- So nasty
Brittnee – You would think they are putting chemicals in it
They tell Brittnee she’s good this week this week. They point out when you become the target people won’t look you in the eye. They agree it’s better to know you are going home. Bruno points out that Sindy knows she’s going home.
Ashleigh – She definitely tried to campaign for a bit..
Ashleigh says Sindy slipped up at this point in the game people are looking for anything to put people up.
Bobby explains he was just looking for anything and after Sindy was heard targeting the boys he had his reason
Bruno – Nobody wants to divide the house right now it’s going to be a clean sweep.. see later then a HOH competition.
Brittnee says it means a lot to her that they are keeping her she never thought she would meet people like this coming into the show.
Bruno – You really connect with people.. I’ve known you all for what… 2 weeks and it feels WAY longer.
THey point out that Risha was really surprised she was voted out. Ashleigh brings Risha flashing her boobs all the time. Sindy joins them. They continue talking about Risha flashing her boobs, “She don’t really care” 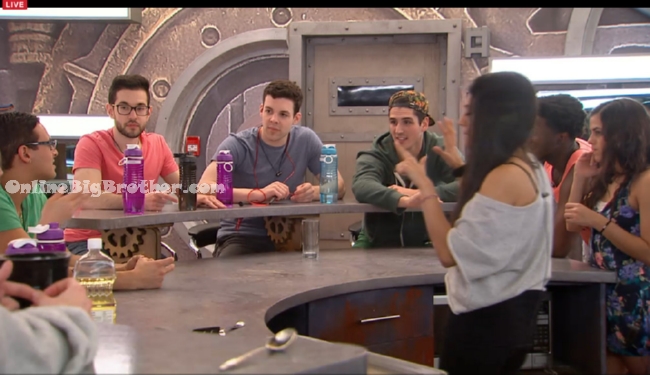 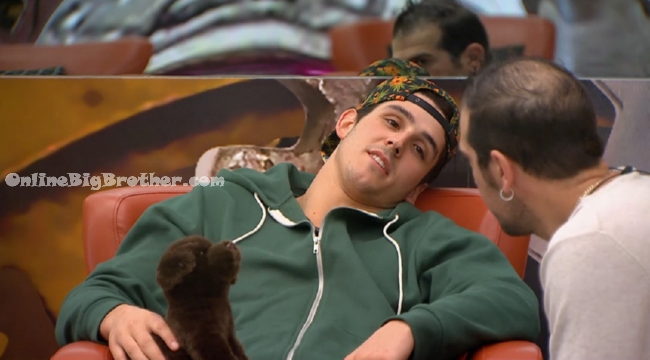 Talking about the lack of game talk today and how nice it’s been. Bruno says Naeha and him talked about talking about game.. Feeds cut..

When they come back.. They are talking about how Good Naeha is at this game
Zach – She’s going to formulate a team against us
Zach warns naeha will try to join up with Johnny, kevin and Pilar
Bruno says he’s OK with AShleigh.
Neaha comes up and to offer some slop chips she’s made. Zach says they are good he would eat them even if he’s not on slop.
Feeds cut again…
Bruno says Johnny and Naeha went to Graig and told him they want to target the young guys.. the young players. Bruno wonders if they are telling him that Because Graig isn’t young or not.
Zach says the young girls they can manipulate but Neaha they cannot manipulate her she’s too smart, “She here to make big moves”
Zach “she’s soo smart she’s next weeks target”
Bruno – She has to be
Kevin joins them. Pilar walks by.. Bruno asks if kevin is going to “HOOK” up with “that” Kevin- “I’m not against it”
Kevin says Sindy is still campaigning. She hasn’t talked to Zach at all. Bruno thought Sindy was done campaigning. Bruno asks him who is Kevin is worried about winning HOH. Kevin says Naeha, “She’s so f***g smart”.
Bruno says he knows it’s mean but they will have to put Naeha on slop to make sure she’s weak for the Power of Veto. Zach and Kevin agree.
Kevin says Godfrey and Jordan are on the same page to Get Naeha out. Bruno says he doesn’t know about Johnny points out that Johnny and Naeha are getting close they are always together.

Across the couch Graig is telling Brittnee he will never write her name down. He’s also being talking to people in the house trying to shore up the votes for her. Brittnee says she has his back, “Always”
Graig – “You too honey.. you’re special” 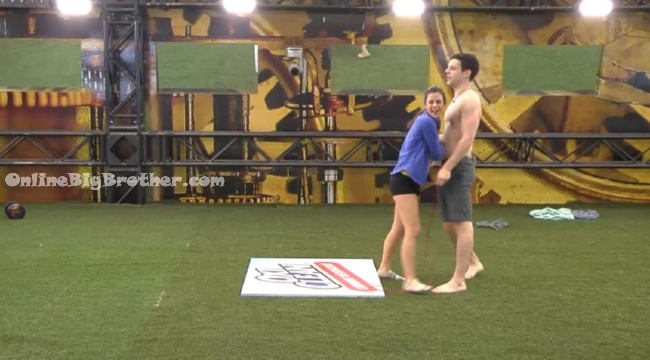 8:39pm Kevin and Pilar skipping together. 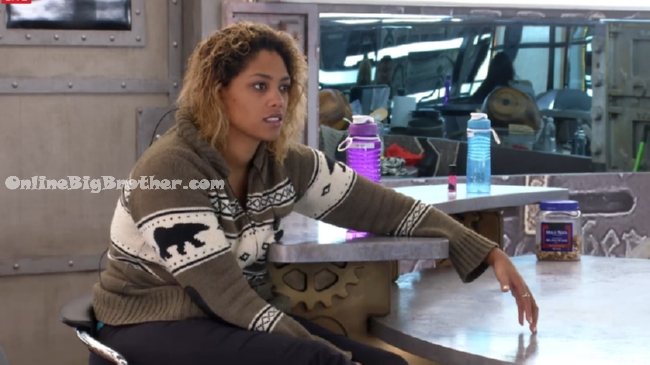 8:43pm Kitchen Naeha and Brittnee
Brittnee says it feels good right now but she won’t know for sure until Wednesday. Naeha points out that Graig is trying to cause a rift between them and Sarah. Brittnee “I know I’m not stupid.. as long as we know we have to be careful”
Neaha recommends before Wednesday she gets into Graigs ear and make sure he knows they are not going after them. She also wants her to mention that she talked to Naeha and they want to join up with Graig and form a powerhouse. 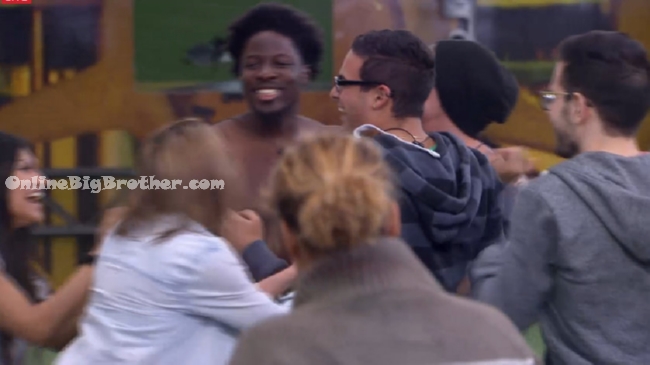 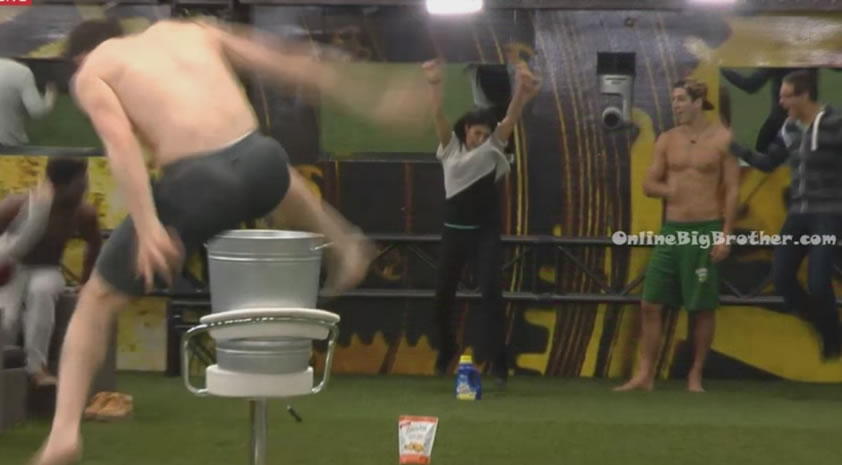 
Support the site and purchase your Amazon goods through our link below. It doesn’t cost you anything and we get a percentage of what you buy.

I would rather have Sindy stay; as annoying as she can be sometimes she is a really good at comps and is ready to make a big move and just makes the house a bit more interesting! And I can also say that Sarah, and Naeha are already my favs….they are super smart and actually KNOW what’s going on in the game unlike some people *cough *cough PILAR *cough *cough

Tiffany
Reply to  Ya.

She could still come back. Like what arises said

my guess is she is most likely to win any evicted HG comp, it won’t matter what type of comp it is other than popping balloons to find the right numbers or something.

I don’t think the HGs realize their DR goodbyes are not getting seen by the evicted HGs, they seem concerned about them. I think they should assume a call back it happens a lot lol

Pilar reminds me of other ‘recruited’ HGs, who don’t seem to realize they are playing a game, they are not even floaters, they just show up, then surprised when they are called on to be a part of it all, like a nomination or comp

Sindy brought this on to herself. She is competition but has no social game?

I am glad Cindy is leaving as I found her annoying. She keeps telling people she is beautiful. Maybe she is trying to convince us?, herself? Personally, I don’t see the supposed beauty, but maybe it just isn’t my taste.
Last year’s beauty queen was a much better example of the traits required. She was a sweetie!

But Cindy is good at comps and she isn’t completely evil, so I can’t hate her. She’d be good to go a bit further and then get cut.

Ugh typical guys thinking that they can manipulate the younger girls. Hopefully its not true, but Kevin/Pilar and Zach/Ashleigh are getting awfully close.

I love pilar because we are both mexican lol but she is seems like she has no ounce of game in her. My best bet on how she will do in the game is she will float along. But she looks like a comp threat and that will want to persuade people to take her out. she will maybe allign herself with a girl when she find out the house wants elimanate her

Im rooting for Pilar too and Im hoping that its just because shes trying to lay low for a bit and letting other people become each other’s threats.
She’s really only on the radar of Naeha’s.
Johnny doesnt seem to want to get rid of her yet but only to put her up as a pawn. Sarah is trying to get into her ear to work with her. Willow believes that she can trust her.
What unfortunately helps her is that everyone sees Kevin/her as a showmance and it looks like most of the house supports them being together. Zach/JP want to do a new operation triple date plan and Graig even told Kevin that he wants to keep the good girls (ie Ashleigh/Pilar for as long as they can) and get rid of people like Naeha and Sarah.

Zach & JP are trying to play the “middle” and let both sides take each other. Pretty smart. They’re only loyal to themselves. And shy would naeha put up Zach? They talk game and it’s foolish to think he has her back. I have a feeling graig will win next HOH, all of the guy are throwing it.