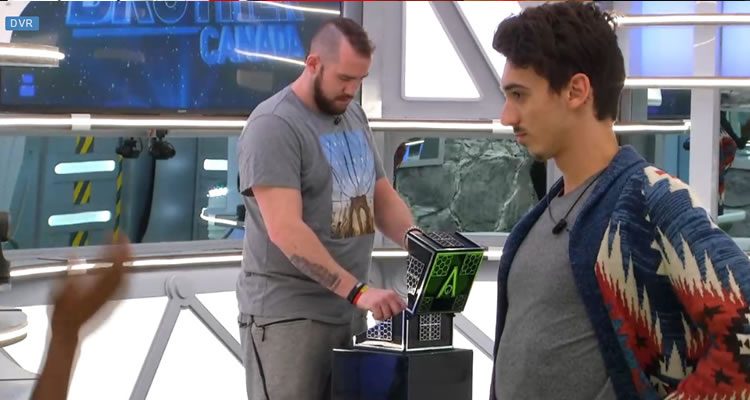 Dillon used the power of veto on himself. Demetres nominated Dallas as the replacement nomination.

11:23am HOH Ika, Cassandra and Demetres
Demetres tells her they need to chill for the next few days and see what the house is like. He doesn’t want to flip around for the next 3 days “You’re good, you’re good”
Ika says she’s going to stay out of it not to Demetres or Casandra “Anymore”
Ika – I don’t care.. I don’t

Demetres – you’re the only person I actually f****g trust in this game.. Don’t roll your eyes
Demetres – I talk to you because I respect your gut
Ika – I don’t think you respect my gut .. I don’t want to talk about it..

12:26am Bruno and Sindy Bathroom

Bathroom Bruno and Emily
Bruno tells EMily “I think we’re OK.. we have a couple days he’ll shoot himself in the foot.. No bullshit you’re my favorite person in here OH MY GOD. hands down”

Brun o- this is why we couldn’t chill all the time because that could have been me up they’re with you..
Bruno Explains that Dallas would chill with Emily and Dillon and look what happens he got nominated.
Emily – do I have your vote to stay.
Bruno nodes
Emily – OK
Bruno- I can’t be on the wrong side of a vote that’s very important to me If i’m on the wrong side 2 weeks in a row.. Not good.
Bruno tells her to not roll over and die “I feel safe if you’re HOH”
Emily leaves Demetres comes in
Bruno tells him he’ll vote with what Demetres wants. “What do you want big bird”

Dre is pointing out they’re’s 2 players that have been comfortable all the time and it’s Kevin and Bruno.

FYI Feeds have been down for awhile. no idea why. There was problems with the plumbing so maybe production is fixing that.

Feeds come back are 6 no word why they were down. Houseguests appear to be getting ready for something. Putting on makeup etc..

Kevin Sindy and Neda are agreeing that Dallas is the one the vets are voting out. Ika joins them confirms Dallas is going home. Neda says they can get the French connection and Dallas to vote their way. Their angle will be that Dallas keeps telling them “Vets vets vets”
Ikas says they aren’t sending a vet home they are sending “Her (Cassandra) Solider” home

Ika tells Gary that Cassandra is digging a hole and dragging them down that whole. Ika thinks Dallas should go. Gary agrees. He told Cassandra it’s time to let Dallas go.
Ika – can I trust you … Gary..
The laugh at their alliance name “The petty Princess”
Iak says she tried to get close to Cassandra but all she says is lies. Ika wants to distance herself from her. Gary agrees Ika will become a target if she doesn’t.
Ika about Cassandra – She’s losing her mind right now.
Gary says he told Cassandra if she doesn’t stop she’ll be a target next week after Dallas.

Bedroom Emily, Jackie and Dre
Emily tells them she needs them in this game or they’ll get picked off one by one.
Emily – If Dallas stays he’s a WAY bigger threat than I am
Emily points out that Dallas is with Ika, Sindy and Neda. She needs the newbie votes. “I think I can swing this”
Jackie – I have a huge plan I have a master plan
Dre brings up theres vets in the house that are Way too comfortable.
Emily – this is a vets game and it’s making me sick.. If I win I’m putting up two vets, Ika, Sindy or Ika and Kevin. (Loving Emily)
Emily – I am going to do that and if Dillon wins I can get him to do the same to.. we can totally change this game around
Dre – I’m not scared to make BIG moves Emily but you have to be smart about it

7:34pm Cam 1-2 CAssandra and Dre Poolside Dinner
Dre says William is getting close to Kevin. Cassandra is getting worried about him. Dre reminds her that the house thinks they are a duo but William is doing his own thing. She tells Cassandra jackie can be trusted.

CAssandra wants Neda to go but she’s protected by the immunity. Dre wants Bruno and Kevin gone over Sindy. She’s creeped out by those two guys. CAssandra points out that Neda is close to Sindy and Ika getting rid of one of those reduces neda’s power. Dre syas she has nothing to lose and isn’t scared to make a big move. She would not be scared to put Kevin and bruno up.
Cassnadra – I cheers with nice wine with you to go to Final 5 with you
Cassandra – with Gary I trust him and I want to go final 5 with him.. I like Ika
They Agree Neda and Ika are very close but Ika is still someone they like. Cassandra thinks those girls will turn on her.

Cassandra wants to go to the end with Dre, Gary and Ika.
Dre says Emily is going after the vets, the girls.
Cassandra asks if Emily would put up Demetres
Cassandra – no.. she wants to prove she’s belong here she’s after the girls she doesn’t hang out with.
Casandra – can we get the votes to keep Dallas..
Dre – I talk to Sindy a bit
Cassandra – she’s shady
Dre – Ya.. she would lie to me
Cassandra says Demetre is so wishy washy one minute he wants Dallas another he wants Emily.
Dre thinks Kevin and Bruno offered Demetres something.
They wonder if William can “play” kevin and get information for them.
Dre feels bad that they are going to waste all this food there too much to eat. She asks big brother to not throw it in the garbage.
CAssandra says Demetres has the biggest crush on Ika.
They want to keep Dallas, counting the votes
Cassandra says the only people that has her back are Jackie, Gary and Dre.

Ika saying that the vote this week is a hard decisions. Says she likes both Emily and Dallas. Points out if Dillon was still on the block it would have been a easier decisions.
Ika claims that it’s not about vet or newbie it’s about connection
Emily tells her if she stays Ika will not be on her radar, “I’ll give you my word”
Emily says she’s the only one that still talks to Dillon.
Ika – I honestly like you I swear.
Ika see that Emily is a honest person.

People may be confused by the site layout.

Critical spoilers like POV results, are here https://www.onlinebigbrother.com/todays-big-brother-spoilers/
This is because it takes so long to post these videos. Instead of waiting 3 hours I made a simple page for it. You’ll also see listed the last two days Live feed updates in order.

The first 4 posts on the site are the ‘Stickies” these are the posts to deal with POC, HOH, NOMS etc. Below that are regular non sticky posts. Like the kraken hour, and a regular live feed update.

If people find this too confusing I’ll change the format to just show all the posts on the main page in chronological order. this will take me a couple days to do.

Simon, please tell me you recorded Cindy with an S dancing in the hoh room lastnight! if so could you post it?
Shes a great dancer, wow so hot!

I like the small box with all the faces and names on each page. Especially in the first couple weeks I always like to refer to it, just to know who I am reading about. Other than that, layout looks good!

Thumbs up from me for chronological! I know I found it a little confusing so can only assume others are. People resist change Simon lol

Chronological vote from me as well. I can always check back for videos.

*gets passed down to Cassandra, deal with it. X

Did Ika just kick Demetre out of his HOH room???
I heard the snap from that whip from afar. Lol

Simon,
Is it possible to get the index of posts back?

wtf happen? Dem told Dallas he was putting up Jackie

Thanks Dawg and Simon,
I’m just catching up since the premiere…and of course this is the best place to do this!
As I plan to, I hope everyone is donating $$$ something to you guys for this work and site…cuz i am figuring with the Vids it is alot more time and effort than regular BBUSA without the vids….here youz are providing both Vids and Readable great updates! Keep it up…Thanks!

Simon and Dawg need to put the cast up on every age like they do with every other Big Brother. This new set up is just stupid and time consuming for people like me that read this site on my phone. Now I have to click a seperate page just to see the cast? This needs to be fixed asap or I will just find another site for me and my wife to follow BB updates on.

Really Maddi ??? Let’s see your site so we can tell you how to run it and then go another site anyways

See ya. Wow some people are so arrogant!

It’s hard to follow without the index so I agree with Maddi.

I totally get it. I’ll be working on changing things this week.

We try to make the site as easy to use for everyone and appreciate feedback. I’ll try and figure out a way to make it work for the community. There’s some limitations to what we can do during a season but we’ll give it our best shot.

Your doing a FANTASTIC job with this site Simon.
Sorry but that comment from Maddi was just rude and inconsiderate. I and I’m sure viewers like myself find it offensive because we appreciate ALL that you do no matter how you choose to do it. Feedback is one thing, but that attitude was uncalled for.

Thanks for the support SuziQ

I need polls yo

i gotta agree with this one, lol

I liked the former version because when i was reading thru the recaps, and get to the end above the comments i could click to the link that would take me to the next chronological entry, i am sure this version is better for ipads and phones tho, which i don’t use, so i can adapt to it all. I am just not sure if there are two sections or just the one, tho

one like this one with recaps and videos and another with spoilers is it?

i do miss the polls, and don’t forget to make the usual (in brackets) side comments, those are the best part !!

why do we need polls!if you want poll go different site then!@

u see dallas on the block!