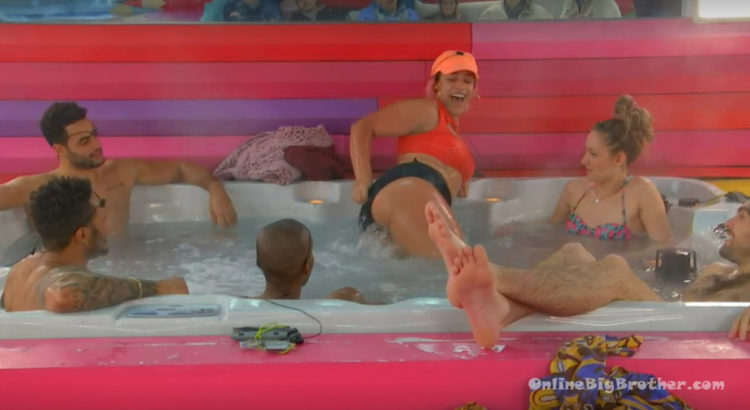 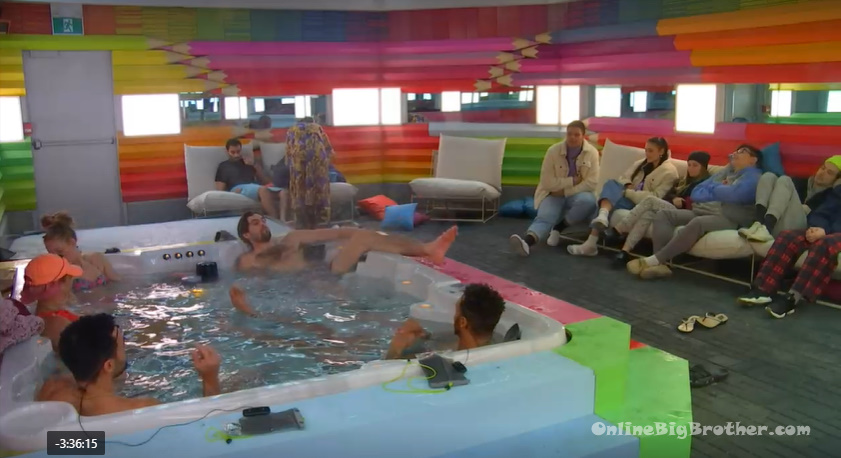 10:15pm The house guests are sitting around and in the hot tub. Victoria starts rapping – So happy to be here, big brother give us beer! Ya’ll saw my t!tties but I swear I still got class how about something new .. here’s my a$$! They house guests laugh. Victoria – I was like what rhymes with @ss!? Breydon – well are you going to show it or what? Victoria – no ya’ll have seen enough. I was like what rhymes with v@gina?! Jed – When Vic’s in the tub its 200 degrees. I look you in the face I’ve got something to say .. I want a piece of that cake .. I am not talking birthdays! 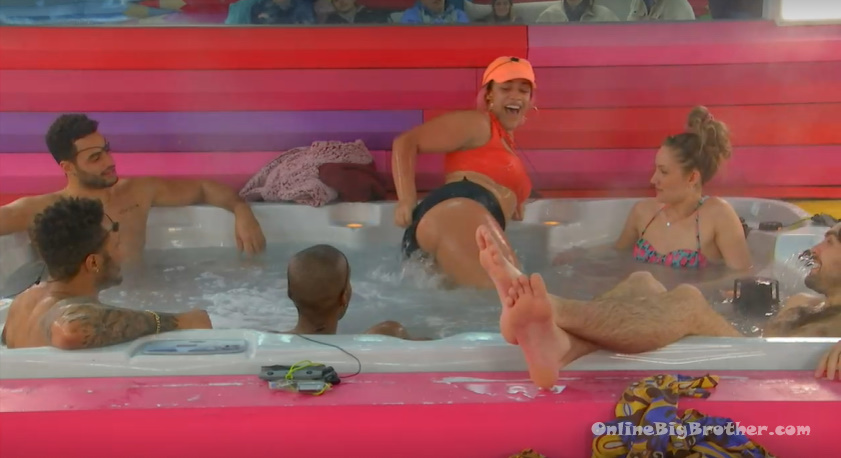 11pm Backyard. Keifer and Josh.
Keifer we’ve done a lot today! We’ve done a lot! Josh – the ceremony was pretty early though. Keifer – it was really early. I forgot that, that was today. Josh – how could you forget?! Keifer – I don’t know man. Its been a day! Josh – it has! I’m jealous that you get to chill for a little bit. Keifer – hopefully I get to chill for a lot a bit. Josh – you get to chill at least until the next HOH competition. Keifer – hopefully I don’t have to stress about that. I think I will! Josh – why would you not stress about that. Keifer – I think everybody is stressing about it. Josh – I think there are some people that aren’t stressed. Keifer – I don’t know man. I think everybody is stressed. Nobody knows what’s going on. Josh – I know they’re going to be using that to my advantage tomorrow. 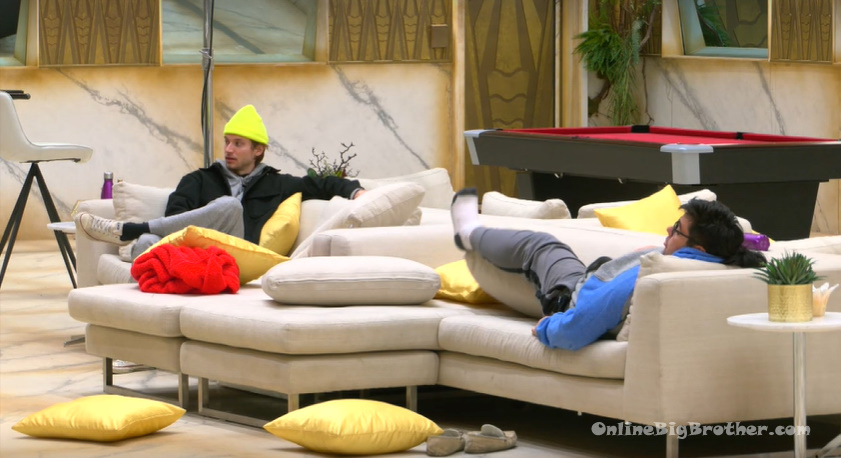 Bathroom. Beth and Breydon.
Beth – I am an actual disaster on this f**king tv show. Breydon – I am just so curious to see what Josh said about Rohan. Beth – I know! But like when would it be from? Like who is sharing sh*t with him? That is like legit from day f**king two! Breydon – that’s what I am saying. But what was he like .. I have fake f**king tea? Beth – that’s what he is saying. Breydon – yeah he was like I have big sh!t to blow up about Rohan. Beth – does he know? Breydon – no. 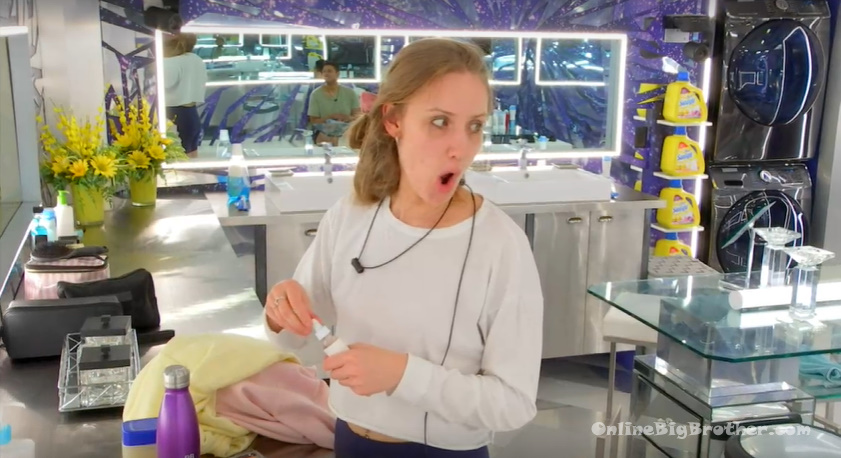 8:35am Keifer is the only house guest that is awake .. 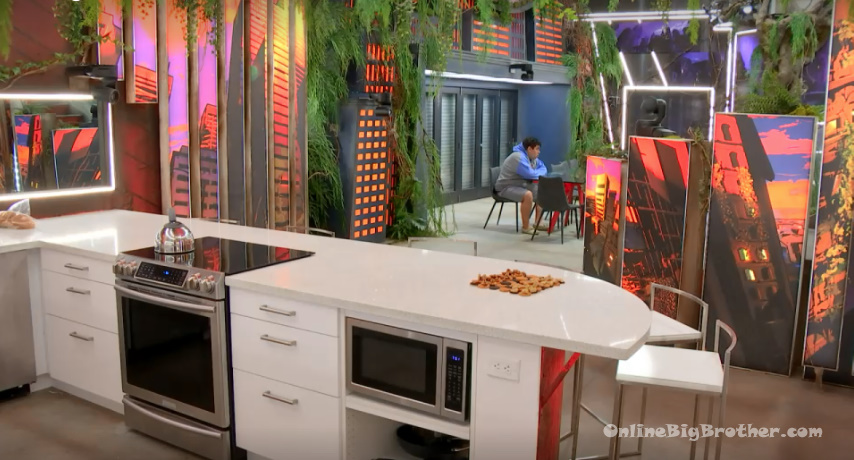 Feeds have been down most of the day.

Storyline, writers and editors have finally come up with their season plan. Time to inform the houseguests?
Someone already found the magic ball in the ball pit room with the key inside, they’ve taken the secret marked door to Narnia, and a couple of the fools ate the turkish delight from some woman on a sled?

Comments from the house were that they watched videos of past house guests on the TIkTok screen while feeds were down.
They’re more convinced someone from a previous season will come in, or the two evicted as of Thursday will return. (oooor, production may think they are being boring and trying to egg them on).
They’re still speculating on duration of teams. Kief seems to think repeatedly that a blow out wouldn’t be fair and they have to even up the sides. Me: why? You chose your team, that’s the team your on, and production has to make things fair? it’s not like HOH is run in teams this season, it’s not like it’s a team HOH. If you’re on the team losing, you’re on the team with dwindling numbers, sucks to be you. My soapbox.
They’re still speculating what is Josh going to do?
Tina reveals to Beth that if she won HOH Ro and Breydon would be noms.
Yesterday Beth revealed to Tina if she won HOH Ro and Kief would be noms so that she doesn’t show her cards.

Tina, Tera and Kiefer are talking like they are octogenarians forced to sit at the kiddie table.
I’m actually finding it mildly annoying. I know in BByears 30 is the new 65 for casting purposes… but c’mon.

My questions today: which of Rohan and Kyle goes on the alliance scouting mission today? Whichever it is will inevitably reverse whatever the other did yesterday.
Who will nap in the ball room today?
Will Josh start his campaign? Will Rohan campaign at all? Gotta tell ya, if i’m a voter, and a nominee doesn’t campaign to me… I’m liable to vote them out BECAUSE they DIDN’T campaign to me. That’s too comfortable and sus.
One thing I miss about early seasons (season 2 especially) is you could bank on who would campaign at what time, because one nominee would get called to the d/r, be gone for 45 minutes, come back and campaign. the NEXT DAY, the other would get called to d/r for 45 minutes, come back and campaign. It was regimented. But of course, I also speculated at the time that after both campaigned, one of the noms would be called to the d/r, and given the news that they were leaving. I don’t know. after both campaigns, one of the noms would be called to the d/r, and come out all sour and start doing their goodbye tour. This was most obvious in 2 when Kenny and Sarah had their bonding ‘i’m gay’ moment after the d/r call.
Last question today? Did anyone get egged after Beth hid them on the tops of the cabinet doors? Two days ago?

SOMETHING else: from episodes thus far, Ty/Jed/LaT are a trio. Beth/Austin with Brey are a sort of trio. Kyle/Ro are a duo. that’s the route they’ve gone. So, 90% of what can be constituted as game is being disregarded completely. That’s a pretty big plothole. Guess they needed to squeeze in a couple more Beth exists d/r clips.

I see it that Tina, Tara and Kiefer are out of place on this Teen BBCAN,silly!

I think Tera is out of place because her method of seed planting (her own term) comes off as mildly accusational and almost confrontational. As mentioned by Vic, Au, Brey.
I think Tina is intentionally pulling the old card, as a sympathy driven don’t target me device (none of these kids want to play with me… while i’m in the majority alliance AND in the side alliance with the other two meatheads and therefore the safest person in the house because I’m double dipping well).
I think Kief is doing the exact same as Tina. Using what he views as his negative physical aspects as a social device in order to make it socially unacceptable to target him.
To me it’s strategic that they complain about age, because it provides another little side alliance line of defense.

I THINK we are getting the first HOUSE MEETING.
House v. Josh.
He said in his early campaign to Jed:
it was Austin that came up with Prettyboys2.0 and he’s taking the fall.
Ro hates Vic.
Austin, Brey, Ro and a fourth are out to get Jed.
Ro is after Jed.
Jed told at least 6 of them at the hot tub.
They decide to call him on his crap.

The house meeting isn’t going to be fireworks.
Jed is leading the convo. Josh hotseat. so far Rohan has hopped in.
What they are revealing: Jed has no receipts and nobody backing up what he says.
He isn’t helping himself. Josh later says broken telephone is the reason. Because the talk with Jed was during feed break…. we don’t know how broken the telephone was.
Jed is more confrontation one on one than during the meeting. like ‘ur going home’ confrontational. like ‘i’ve got deep connections’ confrontational.
Josh is correct in lots of what he said… but he has NO PROOF and a history of throwing things against the wall to see what sticks.
Vic is trying to cover her ass. She only revealed that Josh said Ro didn’t like her, but he’d already given her the full spiel (again, during feed outage).
after effects: Vic deflects attention by playing did Austin look nervous to you?
Josh tells Beth he’s disappointed in her. Win that vote Josh.
Kyle tries to play good game, good game to Josh.
It turns out having V. as your ally isn’t that great (pushed Brey yesterday as a nom to LaT, pushing Austin as the liar to Ty) tells Josh she wants him to stay. Is this just for chaos effect?
NOT A POPCORN MEETING

Definitely, not a popcorn meeting