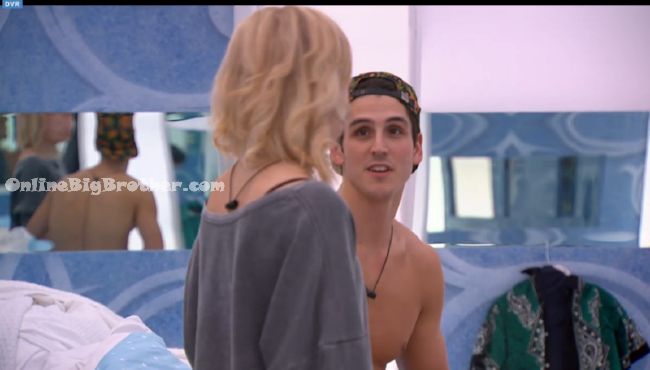 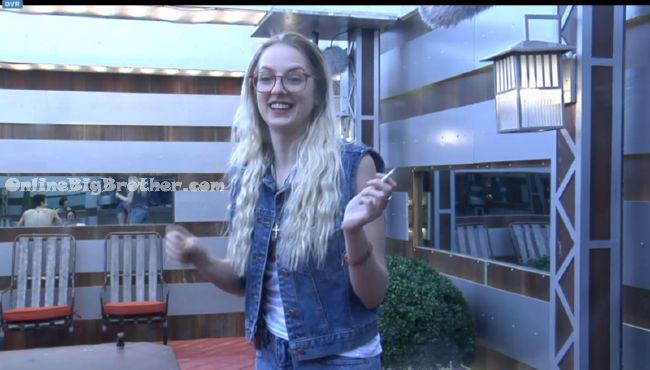 6:00pm Hot Tub Willow, Kevin, Sarah, Bobby
Sarah had a task and won a showing of a new TV Drama
Kevin asks if there was mention of Alcohol
Sarah – NO 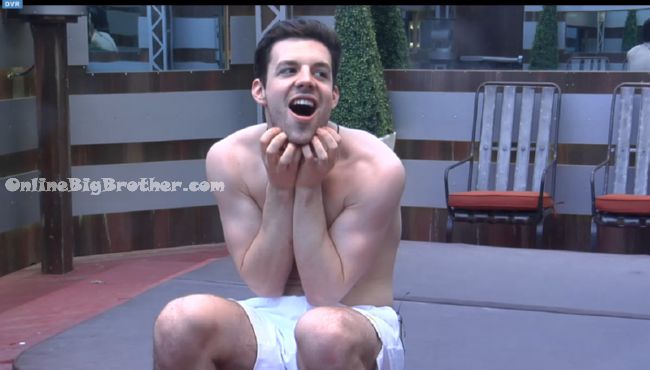 Talking about Getting Bobby out this week. Zach says the next HOH is very important. Jordan says the next two HOH’s are important.
Jordan says it would be so funny if Ashleigh b@ckdoored Bobby
Jordan thinks Godfrey would get nominated if canada is HOH.
Zach says Jordan and him will win the next two after that Ashleigh has to “You’re going to have to send bruno home.
Zach tells her there’s a lot of people to get out Brittnee, Willow. They can leave the “hard ones” later.
AShleigh wants to keep Brittnee and Sarah as long as possible. Sach agrees says “They suck at compe we can kill them”
Zach – “But we still want to get the threats out now
Zach – I was shitting my pants laughing last night thinking of potential moves.
Jordan is going to try and figure out from willow is onto the couples or if Johnny is lying.
Bruno joins them. 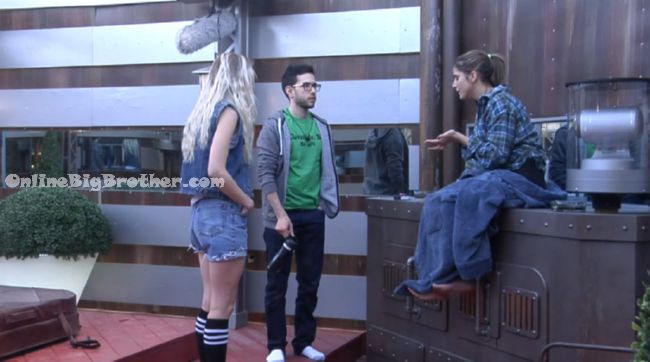 6:11pm Hot Tub Willow Sarah and Jordan (Parts of the video have poor video quality.. Sorry about that)
Prior to Jordan coming in Sarah and Willow are talking about continuing to play dumb and emotional.
Jordan joins them.
Willow says she’s sorry she loves him but she feels torn.
He tells them that Johnny is telling people the girls are joining up.
Jordan asks where her head is at if Johnny goes home this week.
Willow says she would put up Godfrey, “I think there’s some boys working together and I never talk to him.. he’s super smart.
Sarah – I love him .. he’s so smart.. He knows so much,, he pulls out a plato quote and aristotle quote
Willow – he’s a philosopher
Sarah says Bruno’s favorite players are Victoria and Jocasta “People that did nothing and got taken to final two and he says those are the best players”
Jordan asks her if she’s worried about the Couples.
Willow says she is she just had the conversation with Sarah.
JOrdan reminds her it’s still early
Willow wonders where Kevin’s head is at
Jordan – He’s just here to have a good time he doesn’t know what to do.
Willow asks him who his target it
Jordan says Godfrey because if they don’t get him out of there he’ll continue to float
Willow says Johnny going is a good play for her because she can’t beat Johnny in competitions.

Jordan leaves..
Willow – I’m not 21 and in love in here
They go on to discuss what is happening with the showmances.
Willow – Zach’s smart he knows what he’s doing
Sarah – everybody has someone
Willow – the last few days lines have been drawn.
Willow says the Couples are dangerous Johnny told her the next week it only takes 4 votes.
Willow – all it needs is an alliance of 5 to control the house.. I’m like F***K me 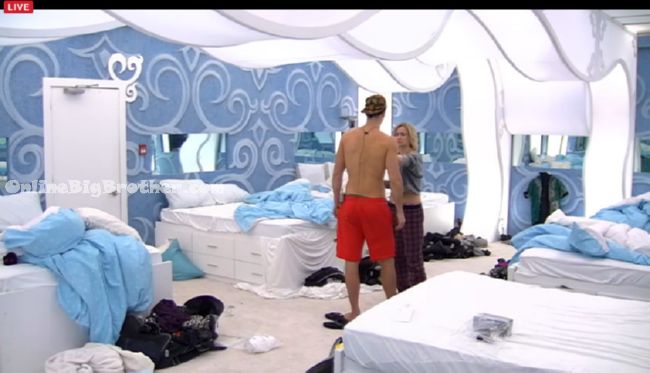 6:15pm Zach and Ashleigh
Ashleigh mentioning she doesn’t want to be the one that takes out Bruno. Zach tells her she’s so soft hearted and kind “I don’t want you to get overwhelmed the game is going to get dirty”
Zach explains the close they get to the end the more emotionally attached they get with the other house guests imagine getting rid of Bruno when they’re down to 5.
Ashleigh tells him to stop being so cocky in the game he’s going to jinx himself.
Zach – I gotta win this F**ing HOH is what I have to do.. I’m excited I’m getting pumped up for it

Jordan joins them tells them 100% Willow is worried about the couples.
Zach – F***g Willow F*** her I can’t believe she’s doing that”
Ashleigh says in the HOH Willow brought it up again having three girls in the end.
Zach wonders if they should get Willow out next week
Jordan say no Bobby first “The diaper alliance is great nobody expects I’m working with you all”
Ashelign – the king diaper of all

(Man all this power has gone to the diapers heads) 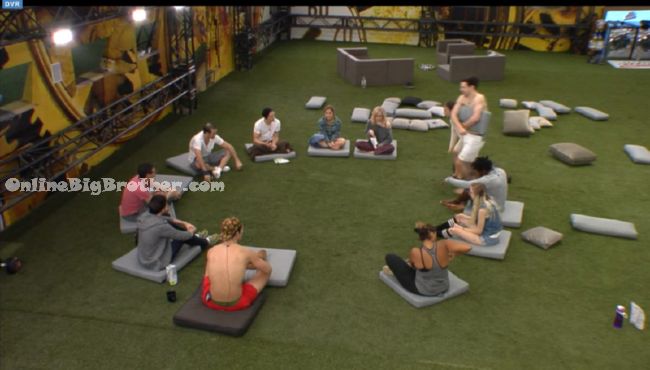 6:50pm Feeds down they must be getting their show

So does anyone know if it will be a forced double pov? Or will we just find out after the ceremony on the feeds tmmrw?

im pretty sure tomorrow after the ceremony is over

Zach and Jordan are showing some douchebags tendencies, I really wish they weren’t cause their command of the house is great.

Jordan calling Godfrey and Bobby Stupid, Dumb, Idiots In almost every game conversation with the diapers is getting a little much. He’s showing his age.

Zach’s cockiness is starting to get noticed wait until he holds some real power.

If the hubris sets in , this will certainly be the downfall of both Zach and Jordan. It’s just a matter of time. They both will likely get “Tommed” (Tom, bbcan1). They both are too young and now it shows.

kevin is so cute

I gotta agree with that!

Really funny how Jordan believes if Canadas HOH Godfrey is going up… when in fact its the exact opposite i would love to see Jordan and Zach be put up it would be amazing to see Jordan squirm and not mention a huge shot at his ego since he thinks hes got everything figured out and is the main reason why the season is so boring.

Team Maintenance Guy until alliances start to get smashed then I’ll reconsider.

is Team Maintenance Guy appearing on the poll soon?

i actually like zach and jordan though
but as long as kevin and pilar are safe, im cool with that

Alyssa
Reply to  another name

Reminds me of Social Media Mogul’s edit on bb16….

Ugh.. I Forgot about that.

another name
Reply to  Alyssa

ah, remembering him makes me wonder if they can do repressed memory therapy in order to actually repress memory instead of retrieving it.

8:14pm Feeds back everyone chit chatting about TV shows.

who the hell does Zach think he is ?? he thinks every girl in this house are entitled to him..
dude you’re not even that good looking! someone needs to tell him that he looks like the wicked witch from Oz

seriously what a fucking douchebag

It must be so immeasurably hard for Zack and Jordan to be surrounded by such idiots, morons, and stupid people. And how dare Willow put 2 + 2 together, do the math, and be worried about the couples. Poor Zack, he must feel so betrayed by her. Playing the game, strategizing, and thinking things through to logical conclusions is an endeavour apparently reserved only for Newport/The Fortress/Bromuda/Double Date/Huggies. Give me a break!!!!! I don’t care about gameplay anymore. I’m rooting for an underdog. That, or hoping whoever comes back in makes a final 2 deal with the maintenance guy and wins. So fatigued and grossed out by all the arrogance and ego. It’s not entertaining to watch anymore.

Well, I might not got that far (Godfrey and Pilar) final two in my underdog leanings, but who knows, lol.

I genuinely cheer for Bruno to win it all.So far he’s proved to be to most decent guy in the house. And yes, he is a smart player too.

Kinda pissed how zach and Jordan wants to win hoh to get rid of bobby and I’m like “why didn’t you guys win f******g earlier, you had 4 chances to win, and you choose now?!?!?” Honestly, I know everybody hates Kevin, but if he manages to get rid of Jordan and zach, he might be my favourite, along with naeha

Really hope Willow finds out that Zach is douche and isn’t loyal at all to her. It would be so great if she put up Zach & JP together… their faces/reactions would be hilarious

I need Graig , or naeha to come back in so we can have some more numbers on the Bruno side of the house. Newport are nothing but entitled pigs. Waiting for Ashley to cook them food & never helping clean up or say thank you. Such disrespect