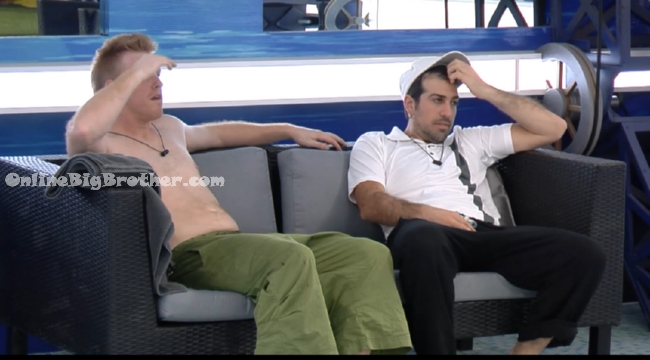 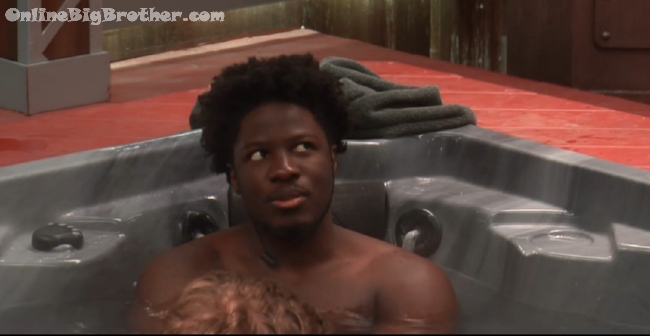 Bobby is telling Godfrey a lot of girls were telling him to nominate him this week . Godfrey thanks him for what he did he won’t forget it.
Bruno wonders who the leader of the girls is.
Bobby thought it was Sindy but it’s looking like it’s Naeha. Bobby stresses how dangerous Naeha is.
Bobby wants to take another girl out next week. Bruno and Godfrey agree

Bruno thanks Bobby for not putting him up says that for that he’s going to help him out next week. “We gotta stay strong man”
Bobby is worried about the girls flirting with guys and breaking up their group.
Godfrey mentions how smart the girls are and them flirting around is a weapon. 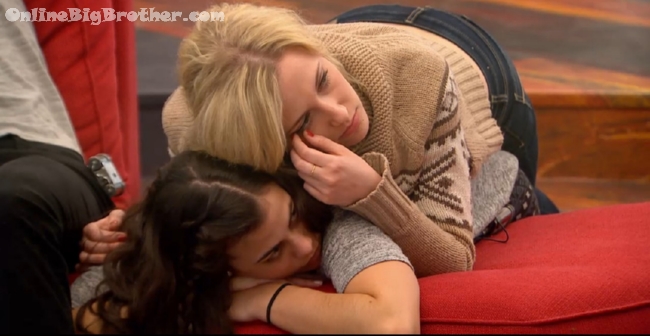 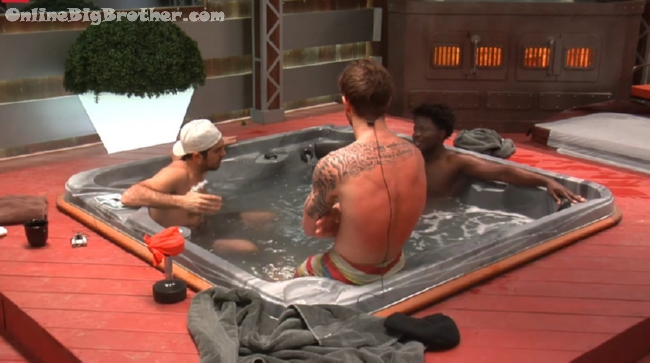 8:11pm Hot Tub Godfrey, Bobby and Bruno
Godfrey tells them he’s going to nominate the people that have been throwing his name out. one of those people is Naeha.
Counting votes to get Sindy out, They need 7 votes.
Godfrey – “Right now I’m sure we have the votes” (To get Sindy out)
Bobby thinks it will be unanimous.
Bruno – She might get a couple votes like Naeha and Sarah
Bobby – That’s going to expose the girls to the other girls
Godfrey – ya ya
Bobby – they are going to want a unanimous vote.. otherwise the girls will be Who voted Sindy to stay.. Might actually be nice it’ll terrorize the girls a little more.
Bruno – I think Sindy knows

Bruno – Two down
Bobby – People have to go home
Bruno points out that Sindy wasn’t even a target if she didn’t have that one conversation (The one where she told the girls she’s going after 2 strong guys) she would have stayed longer
Bobby thinks it will scare the girls to talk in the future
Bruno agrees it’s scaring them even more
Bobby has noticed all the girls are pairing off with guys now.

Bobby – Gotta keep the forearm endurance up.. it’s huge man in competitions
Bruno says how Bobby did in the HOH was impressive.

Bruno thought Sindy was going to get DQ’d
Bobby saw how good Sindy was doing which gave him reason to win the COmpetition. He thinks he would have been nominated if she had won. 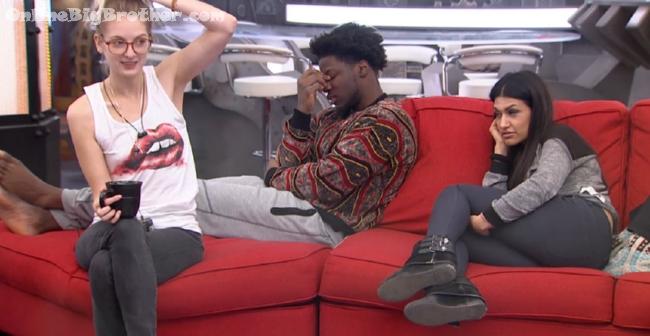 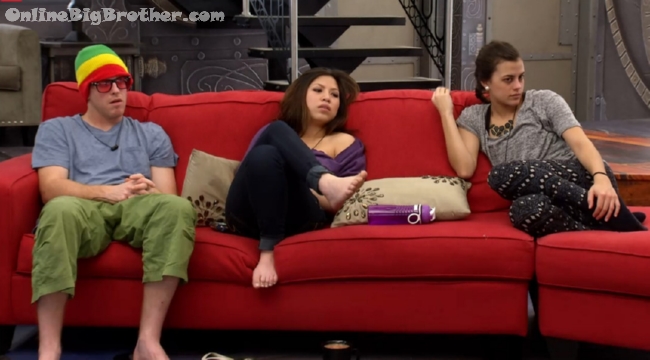 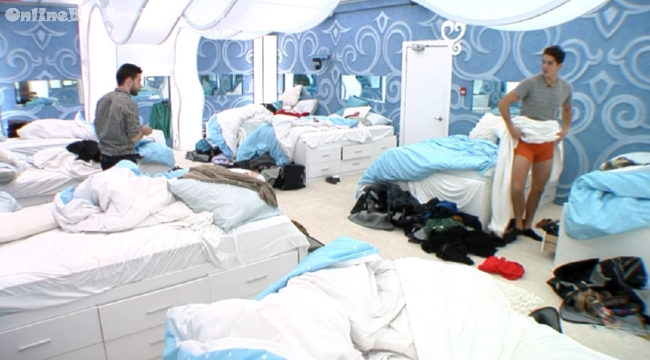 8:55pm Bedroom Jordan and Zach
Agreeing to have a meeting tonight and go over their next moves “We’ll break down where we’re at”. They want to get the Chop shop to go after Naeha and Johnny and for Neaha and Johnny to go after the shop shop. Zach warns that Naeha and Johnny are forming something soon. Jordan tells him they have to be the last ones up pretend to go to sleep then sneak out to the storage room. 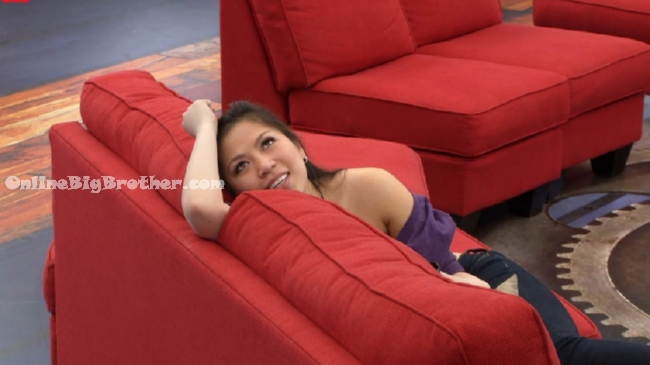 Neha wants them to talk to johnny and try to get Kevin in on it. “We need more people working with us”
Brittnee is worried they are goign to tell the guys. Naeha doesn’t’ think so.

9:27pm Graig and Bruno Pool side

Thinking about telling Brittnee that Neaha has been trying to rally votes against her.
Graig thinks it’s a great idea.
Bruno – That will make her distrust Naeha
bruno proposes he’ll even start talking to Neaha to make it look like she’s trying to get votes.
Bruno is worried that it might blow up “should we play it safe”
Graig doesn’t think they need to.

Graig – I trust Zach
Graig – I had a good talk with Kevin he’s going after Neaha 100%
Bruno says Johnny has no quit in him he’s an animal, he wants johnny out fast.
Graig says the only people that annoyed him in the house was Risha, Sindy, Neha and Jonny.
Bruno – We have to get Britt tonight
Graig – We have to get Britt
Tonight they plan on telling Britt they are voting to keep her.
They both say they trust Bobby and Ashleigh 100%
Graig – We got this
Bruno we’re doing so good
Graig is worried about Sarah but they both are glad she’s been sleeping in Bobby’s bed.
Bruno doesn’t trust Sarah “Kevin I do but I don’t .. kevin dangerous though”
Graig agrees.
Graig says he likes Kevin a lot.
Bruno – I want to get Deep with him deep with him emotionally 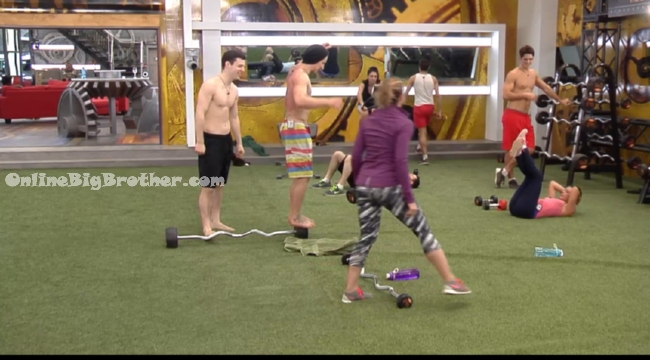 I feel like Willow might bat for the other team….no judgement or anything, just my opinion. She is starting to get on my nerves though lmao

So so so so so tired of these guys alliances….it was great that last year the alliances were co-ed. Also sometimes naeha reminds me of grumpy cat lol

The guys in the house are sooooo worried about getting the women out. Don’t any of them see each other as threats? They’re all so scared of a women’s alliance, because………….?? There has never been a successful women’s alliance in BBUS or BB Canada. I don’t understand this.

Everyone is fearful of a “Neda” springing into action in the latter part of the game. Honestly I’m hoping Naeha wins the next HOH and put a dent into the Chop Shop, they are becoming the first five and it is annoying how they think they’ll win every HOH and can control who goes home.

Brittany, NAeha, Kevin, Sarah and Johnny needs to formalize an alliance now. I’m quite sure that Canada at this point will rally behind this alliance because Graig and Willow are fighting to get the most annoying housemate as of now.

Yeah……. because all of the girls are reaching out to the guys to incessantly flirt, and it is NOT the opposite way at all. Not even 1% *major eye roll*

Does Bobby actually think that most of the comps are endurance? A lot of the earlier comps are trivia, so……. good luck with that. Anyways, this alliance is getting WAY too cocky for their own good, and it is going to blow up in their faces, whether it is sooner or later. They are actually more out of touch with the house than anyone else, and are isolating themselves.

Bruno and Graig are playing too hard. Bruno needs to distance himself with Graig, especially since half of his alliance, and everyone else wants Graig gone sooner than later.

I hope graig and Bruno do decide to tell britt that naeha is plotting against her. it would be fun to see the overconfidence drop off their faces when their game is exposed. while they are at it, why not just tell her about their real and fake and backup alliances. when was the last time that a person told they are being backstabbed didn’t immediately try to get to the bottom of it? if not directly, then by going to another source that hasn’t been let in on the plan.

Is it just me or do these people live like slobs?! Every room has crap littered all over, don’t even get me started on the bathroom! How do you leave the tap running?!?! Aside from that, I think some of these guys are playing too hard to fast and it’s going to bite them in the ass on their way out the door! Can’t wait to watch all this blow up!!!

watched AD for about 10 minutes, while eating icecream out of the tub, in the kitchen, I don’t know who it was, but when he was done, i guess going to put it away ?, he just tosses the spoon on the counter and walks away. I have no idea if he just left it there and expects someone else to pick up and put it in for washing, or if he came back or not.

but that is typical of the chaos we usually see, to the point BB actually makes them clean up at some point. they should already know this.

They should also assign cleanup to the HN group, i know it is adding insult on insult, but as long as they are competing for HN (finally, i hate when all they did in one BB is have HOH name them), then losing is losing all around. They can be responsible for dishes, floors, bathrooms, kitchens, counters all the cleanup that doesn’t include pickup after HGs personal items. Those if found in random places or the floor, just left or thrown in a bin or corner, too bad for the HG who is too lazy to pick up their socks.