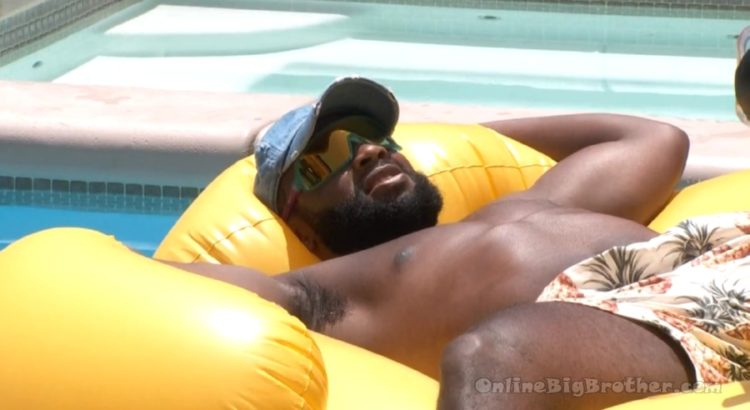 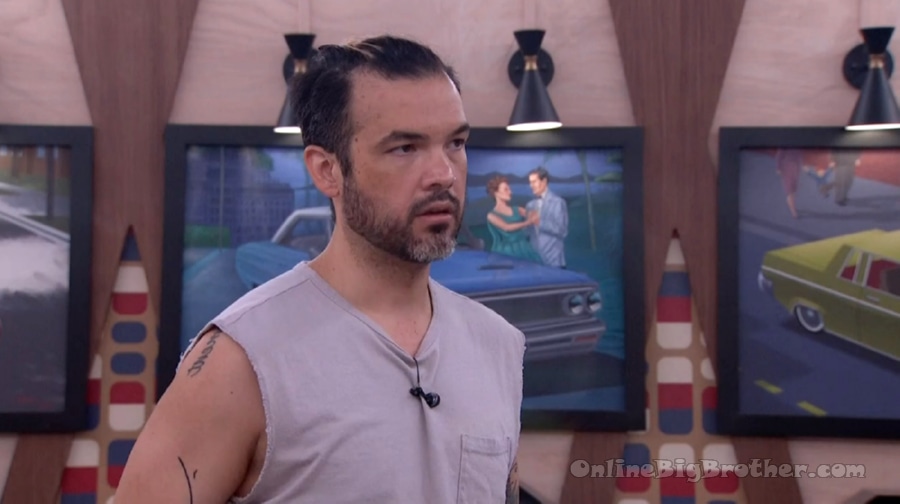 12:28 pm Terrance, Joe and Daniel
Daniel says as far as he knows the plan is still Taylor. Terrance agrees. 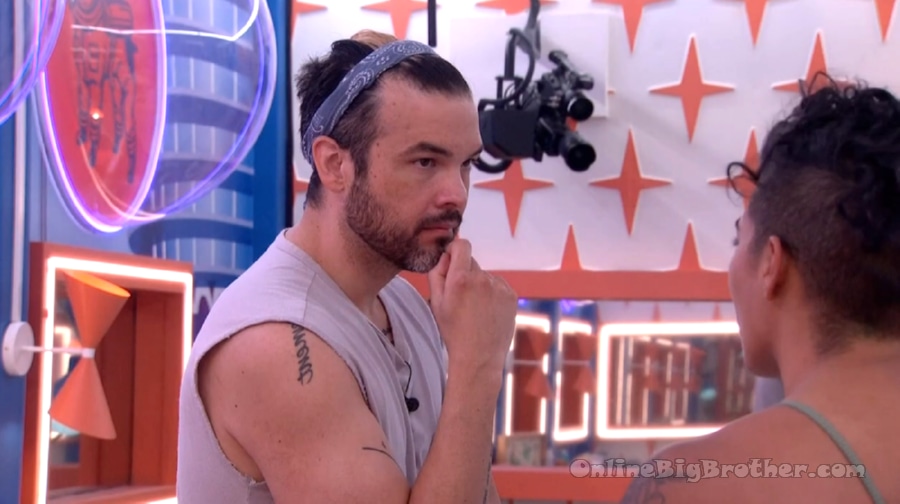 12:33 pm Daniel and Nicole
Daniel – a bunch of clowns.
Daniel told Alyssa and Indy that “They” wanted to keep the nominations the same. “Do not trust these people” 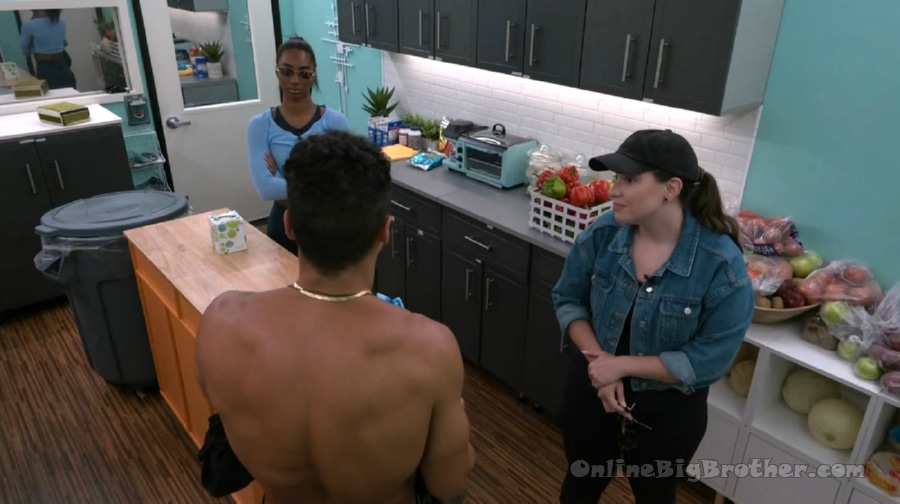 12:40 pm Joe, Britt, Taylor
Britt- let the chaos ensue..
Britt says her and Michael will lay extremely low. ‘you guys have to build back with Daniel”
Joe – Nicole is pissed. Jasmine is pissed and Daniel is pissed now. Indy and Alyssa are running around scrambling. Monte exposed them. The girls are mad at Monte. The only good thing about this is you guys’ name is under the radar.
Britt – let them implode because now that we are super exposed because of HIS stupid decision (No it was your stupid idea to flip the vote at 5am the night before)
Britt- we need to let them implode
feeds cut when we’re back.
Joe – Daniel is under the misconception that [taylor] is dead in the water
Joe – Terrance gave me the hint that he’s willing to vote against Nicole.
Joe – Taylor how are you feeling? Again what the f***
Taylor – I’m sitting there not even thinking it was a chance.
Britt – his emotions are clouding his judgment and he will pay for that in this game.
joe – I will do everything in my power to make sure you are not going anywhere.
Britt says she’s sure it was Daniel that flipped not Kyle. “I trust Kyle.. they had such a short amount of time” 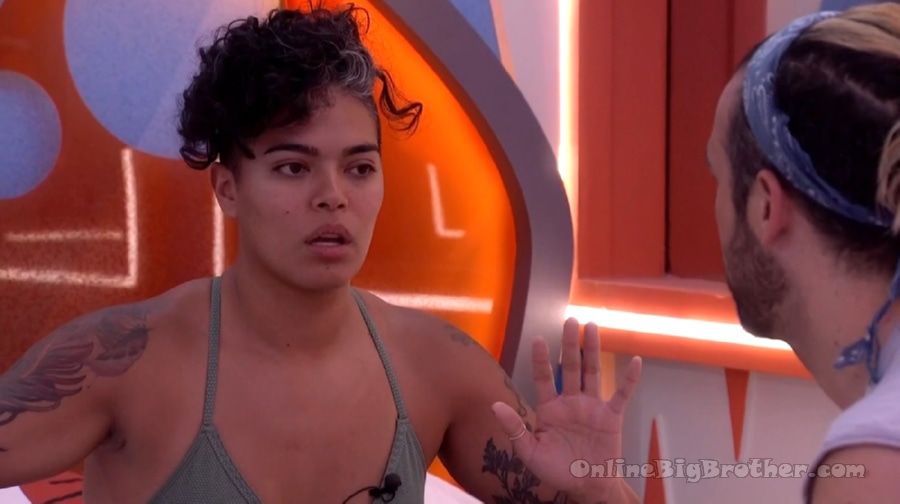 12:43 pm Nicole and Daniel
Daniel – I’m done with these clowns.
Daniel – don’t get too comfortable anything can happen. My key is to keep you safe. I will double down with these girls for the next two days even on a personal level.
Nicole – well if they are playing us they played us pretty good. I won’t go down without a fight
Nicole about Monte – I saw you lie a mile away
They pick apart some of what Monte was saying this morning saying his timeline was wrong.
Daniel says Brittnay sucks
Nicole – Jasmine wants to beat her a$$
Nicole – I’m going to tell you now at any point if he wants to talk to me I will talk to him but I won’t say anything. (Monte)
Nicole – he likes to sit a listen. he’s a great listener.
Daniel says Brittany and Monte suck at lying. Brittnay is not an actress.
Nicole – but she is
Daniel – Community Theatre. I am actor’s Equity
Nicole – whatever SAG awards
Daniel – tony awards 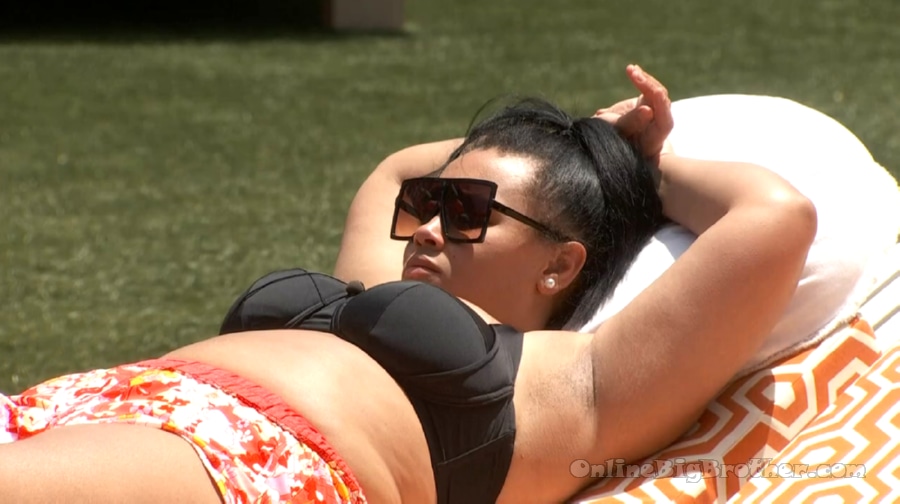 12:54 pm Jasmine doesn’t have the energy to care 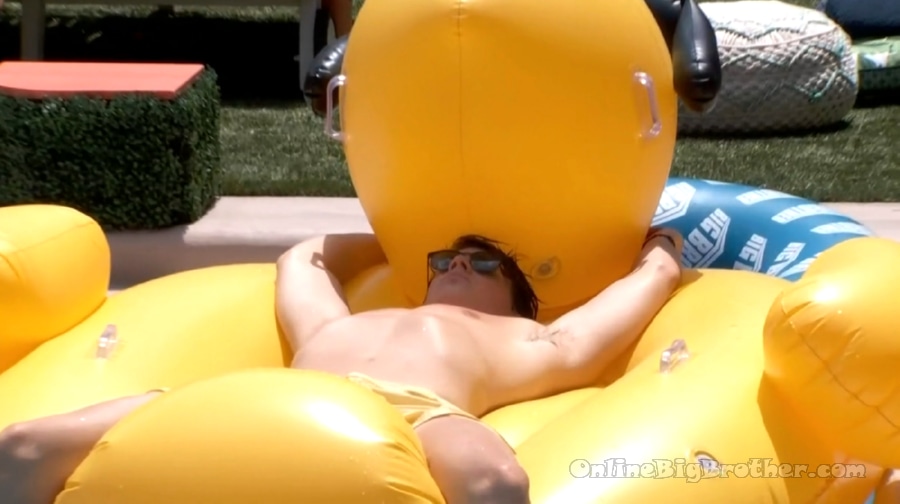 Alyssa is saved thanks to DANIEL & NOT KRAPPY KYLE

Who really cares? Would you rather Alyssa fighting for HOH or Nicole if the next HOH is physical or mental in nature? Daniel just blew it. Thursday vote results will be priceless to watch! Popcorn will be ready!

Well its not as if Taylor got a production save on a unanimous backdoor weeks ago on Daniel’s HOH. Its not Daniel’s fault that the show wasn’t consistent to season 19 when nominee Meghan left week one to a medical condition. It’s the same exact thing Paloma Meghan leaving and Cody got to keep his HOH. On top of it 3 people left week one in S19.
To think your name is let’s play fair ?
What’s a joke is that Taylor fans can’t admit how inconsistent they are about this former precedent in season 19 and the idea if their beloved Taylor got stripped of an HOH like that saving Daniel they would say it’s awful how Taylor is getting a raw deal from the show.

I dont understand why everyone is so sure that production saved Taylor Week 1. Lets be honest if the twist is how they explained it to be. Taylor was being voted out, but she was going to fight in a 1vs1 against Alyssa. Brittany was being saved and HGs cared more about Paloma than Alyssa. In a 1vs1 – Taylor vs Alyssa – im pretty sure Alyssa was leaving, not Taylor.

The fact that your user name is “Taylormade Victim” even though you have access to these updates from the live feeds tells me you’re one of those anti-black trolls. You have no reason to hate her when there are more horrific people in the house such as Nicole, Daniel, and Jasmine.

Why do you keep saying that? Paloma self-evicted week 1, so there was no eviction. Don’t blame production, blame Paloma’s mental issues (or meth addiction).

Poor Paloma was so manic and spiralling. She hated Taylor for no reason and was behind turning everyone against her like an obsession.

truth
Reply to  The Truth

maybe so but now his #1 is on the block. so kyle is playing way better. sorry.

The Truth
Reply to  truth

You’re off the rocker. Kyle wanted to get rid of Alyssa instead of Nicole. It’s takes a natural f#%king idiot for him wanting Alyssa to go now.

truth
Reply to  The Truth

Daniel is so dumb!!! Hahaha

Daniel is a potential melt down candidate for Thursday.

He’s already said he’ll go after the girls on a personal level (we’ve already seen him do that). I hope some of the Leftovers shut that crap down.

This will be even better if they can stay together and evict Nicole.

Taylor should’ve been backdoored gone weeks ago had the the show been consistent to season 19 week one when nominee Meghan left for medical reasons. Cody kept his HOH and had the eviction. Daniel should have too.

You can’t assume Taylor would have been evicted week 1. They had the backstage people to contend with. Brittany was safe and Paloma left. That means allysa would have probably battled Taylor and if it was that obstacle course Taylor did very good.

Tim Dormer is a Legend
Reply to  Boug

ya but the point is that the eviction wasn’t canceled when Megan left and she was a nom.
Production canceled the eviction week 1 purely to save Taylor, but in hindsight glad they did because we got to see this great gameplay with them weaponizing Taylor, kinda like Chilltown did with Janelle in All Stars, and Amanda and Mcrae did with Elissa in the season that shall not be named

The Beef
Reply to  Boug

Wait, you’re being too logical with him, and logic doesn’t figure into it when he bites into something like a pit bull. If you haven’t noticed he’s been locked onto this for damn near three weeks now and just isn’t going to let it go, no matter what. He also uses 4 or 5 different posting names to “re-enforce” the same position, and back himself up with most of his arguments. He’s been doing it for years on this site, which is a shame because every once in a while he makes a good point.

Taylormade Victim
Reply to  The Beef

I don’t believe that. His posts don’t make good points, they make repetitive points. Personally, I’m tired of this dude.

He obviously has a hidden agenda. Smells like a troll.

Guess what? You are the only one that feels that way! I hate seeing Taylor in jeapordy but hopefully the Leftovers hang tough and get rid of the narcissistic evil chief.

it is true Taylor should have already been evicted

Why do you hate so Taylor so much when there are people in the house that are 100 times worse? I think you’re convinced that Taylor is getting some free pass because she has this imaginary black privilege. You keep forgetting two important facts. 1. The Backstage Pass might’ve kept Taylor there if she was to beat Alyssa. 2. Paloma self-evicted so there was no eviction.

TBH, this season would’ve sucked without Taylor because the show literally revolves around her now. The leftovers are one of the more exciting alliances in awhile.

Daniel ‘s hatred for Taylor has him serving Nicole up on a platter. Thank you Daniel! Hopefully Brittany and Michael don’t vote out Taylor because they are mad the veto was used.

How long is Jasmine going to milk her ankle?? She’s feeling a little too comfortable and using it as sympathy to not be put up. IMHO

likely for as long as she can. my guess is decades.

Or until Rockstars daughters birthday.

How disgusting. On my daughters birthday!

I cannot wait for Taylor’s eviction speech roasting Nicole and the live meltdown that will ensue when Taylor once again survives the vote. Maybe Jasmine’s ankle will have the strength to compete in HOH comps.

I’m kind of hoping Taylor goes. That way, one side of the house will not run the whole thing and there would at least be more entertainment 🙂

No, Nicole needs to go. There will be a split in the leftovers I think down the road, it’ll be Joe, Kyle, or Monte switching things up to go further. There is zero entertainment in watching Nicole and Daniel celebrating if Nicole makes it this week. I want both of them to be humiliated and have to answer for all the vitriol they spewed in the house.

I think Michael and Kyle will pull Brittany, Taylor and Turner to make a move on Monte or Joe. I see Michael, Kyle, Turner and Taylor going very far.

How sweet would it be if the next Veto comp was the reward/punishment and one of the punishments would be to wear a clown suit? (And if Daniel was the one to get that punishment? Just the cherry on top!)

I think it would be nice if one of the rewards would be not being able to speak for 24 hours and Jasmine could get it. That voice gives me a headache.

Yesss the VETO was used. Daniels hate for taylor has him blinded to everything it is comical to see. I cant wait for the live evictions thursday and see their reactions. Also for Julie to ask Nicole the hard questions about bullying that Nicole even mentioned she does. There is just so much to look forward too this week!

1) Lol. With those pictures of Jasmine and Kyle, I would be the asshat who would jump on them 2)If Taylor stays, then I really want her to win HoH just for the potential Hera factor

LOL This will go down as one of those iconic moments in Big Brother history . lol

So hoping Taylor picks Alyssa and Indy as her new besties. They would be so upset that even if they win hoh they can’t put her up

It all depends on who you want out next. I want Taylor to win HoH next if nothing more goes wrong and she stays

I would think daniel’s the next target so it doesn’t really matter as long as he doesn’t win. If he wins and Alyssa/Indy/Taylor win veto we might get the house actually targeting jasmine which is a giant win

I’m really getting tired of Brittany. It worked out okay with Daniel thinking he is a mastermind, but really why are they kowtowing to Brittany? She contributes nothing other than stress and a vote.

Daniel doesnt realize he is the only clown in there. Dude got 0 impact on the game and it talking a big game lmao. Lameee

Nicole is on the block, its a good day.