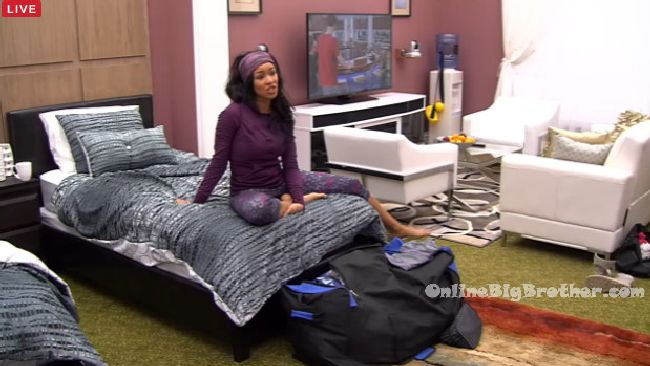 2:45pm HOH room – Tim and Raul are talking to Tim about his plan for the POV. (Tim plans to let the power of veto winner decide who the replacement nominee is if they choose to use it. He’s not telling people his plan yet though, other than Nikki.) Jared says what we were thinking you were going to was only the people playing in the POV could be put up as a replacement. Tim says yeah that could work. You’ll just have to wait and see. I can’t believe you two got off the block last night. Where was Dallas?

Tim says he has no active part in deciding who is nominated and then he says this…….’If I think you’re not taking it seriously or its not a good reason the points will be attributed to your name.’ Uhhhhhhh I think that is playing an active part…..along with all the other rules you are making up as you go along. Nice try…

Easiest cop out way to not get blood on your hands. Not a bad move. But tim always say he wants to shake up the house…this is just doing exactly what the house wants.

This could backfire on Tim. If any of the HGs are serious fans (which I doubt), they may take offence to his attitude towards the game. The best part of Tim’s process is Tim telling Cass to stop eating the votes!

No, he is a AHole for making noms this way.
He does not have the balls to make up his own play like Joel did.
The Aussie sucks!!

This is a bunch of nonsense…seriously. Now it’s no longer Tim’s HOH it’s the House HOH. Utter nonsense. And the nominations can’t be strategic…..wtf? I’ve seen snippets of the Australian Big Brother where a person could get nominated just because they eat too much food, not because they’re a threat in the game. I’m more into strategic gameplay not this circus that Tim is giving us.

Viewers may like Tim but I can’t wait for his reign, or non-reign to be over so someone can win HOH and actually have the balls to put someone up without all the theatrics. . If he gets to final 2 how will he answer the question ; ‘ What big move did you actually make in the game?’ Yah the move of playing it safe and letting everybody else decide and not him the HOH.

If this works for him then kudos to him , but come on Tim, for his next HOH he better make a move.

The noms were all strategic and he stressed over and over that she could – and should – be strategic. He just wanted non-strategic reasoning as well. It’s his HOH, who cares how he chose to conduct it? This made things interesting.

Just take out the brothers their both putz’s anyway get a 2 for 1 deal.

i like tim but i do agree with Dallas that it’s a popularity contest this time. People just follow the majority like sheep as per usual. tim should have had the guts to make a big boy decision and nominated like an HOH does.

I want to hear the girls fart in the secret room: Loveita and Kelsey? Did anybody hear a fart?

Mitch is busted! He’s not my favourite but honestly if he manages to stay after one of those two return he deserves to win lol

I so thought from hearing Tim talk he would nominate well and own it gladly. This feels like a huge cop out. I’m disappointed in this. Might work out for him but as a viewer I wanted to see something stronger from him. I’m hoping for Loveita to come back over Kelsey. Is it going to be Canada vote ? And if so I have no idea who Canada is favoring. But I just don’t like Kelsey’s flirty ways even tho it does work. The women are getting taken out and a house full of men will be left for her and she will go to the finale. I just personally don’t like that kind of game play. I would also like to see how Jared plays the game without her there.

Rudedog
Reply to  Lots of talk

To those saying this is Tim cop-out: He is playing the long game. All other houseguest have now clued him into their strategy…watch as he uses this information to take them down.

do they have a bathroom or sink or anything in that secret room. That would be pretty bad if not, doesn’t seem like it. ordering food in of course, just seems more prison like (tho cells have sinks and toilets, just saying)

too bad they don’t have sound on the screen, that would make it interesting.

Dallas is took the wind out of Tim’s sails anyway, telling people to say his name. Good for him. If it comes down to it, and Tim didn’t do this move, he would have put those two up anyway. he’s just pretending now. Dallas telling everyone to put it all on him also takes the burden off the other HGs. and the reasons, ‘dallas lied to me’ or whatever they are, those are strategic reasons that Tim told them they can’t use. obviously putting up Dallas is strategic, he is gunning after the 2/3 pair, he is ‘head’ of the ‘other side’, he wins POVs and have nots, it is just a matter of time for him to win a HOH. getting him out helps level the playing field for everyone else.

Right now it doesn’t matter who wins the veto because who ever is replaced will never be the one voted out. Unless Dallas wins and nominates Maddy.
Maddy effed everyone over this week and Tim put the nail in the coffin! – I loved what Tim did but I also think it would be a shame if Tim won this game! Time for Loveita to come back in this game and make a strike at Tim and Cassandra!

When Ramsey cries and says to Mitch “you and Joel voted for me?!”…man that got to me , meaning he expected the rest of the house to betray him not them…..to make things worse its personal….man it breaks my heart ….cause am sure he feels so alone ???? …. Then maddy comes– am like to hell with you ????Cuddling with that whore!

Ramsey reaps what he sows.
Why shouldn’t Joel nominate someone that said forty eight hours earlier that he was a man of his word and was with Joel and Loveita? He betrayed one at Maddy’s whim, what makes him worthy of the trust of the other? He isn’t.
As far as Mitch, Mitch is a landshark. He plays the entire weak and vulnerable emotionally card to appear weak, and sees Ramsey doing the exact same thing to fly under the radar. Takes one to know one, and Ramsey is just too inobservant to recognize it.
It already came down from “the house” that Ramsey and Dallas should be nominated. Mitch will always go with the house. It’s what floaters do.

Say what you want abou Loveita but she’s my favorite player this season! Her exit last night was pure class and she seems really geniune and a solid nice person. Maddy and Cassandra are horrible. I find it hard to believe that these two witches beat out thousands of other contenders to play the game. There are no redeeming qualities to them at all. I hope Love gets voted back in to exact her revenge and really shake things up. Joel and Ramsey need her. Was not a big fan of Dallas but I am now. I do hope he survives this week.
Everyone else in the house are just bland gutless sheep!!

Tim’s math was wrong from what people said to what bears he put out. He transposed the brothers nominations. Not a big difference, but it was an error nonetheless. The brothers gave 3 to Maddy, 2 to Dallas.

Tim is just a guy in the house. If they didn’t all follow him around and do whatever he says he couldn’t pull this off. Tim is able to change the game because Tim is the Shepard. To be complaining about the soft power someone has in the bb house is assanine.

Few weeks ago Ramsey and Cassandra pledged to save each other if one of them wins the POV and now Cassandra gives 4 bears to … Ramsey. If I were Ramsey i would spill the beans to the entire house to screw her game down the road assuming she probably has made similar deals with others too .

I see the problem as Ramsey made similar deals with the brothers, Loveita and Joel, and Mitch, as well as Maddy and Dallas.
He blows up his deal with Cassandra all of them think hey, you had the same deal with me you’re just as shady as her. And he’s on the block.

With Tim setting up his way of voting…….yikes….and looks like BB will allow…….he now knows so much info on all….he is the shepherd and leading the Canadian lambs to slaughter…..

Wow. When Tim first proposed this I thought this would be stupid and it was just a cop out. Now I’m not so sure. Every HOH gathers information on who people want to see up and why. He just made it public that this is what he is doing and that he is going with the majority of the house. He isn’t the first HOH to nominate based on what the house wants, he is just the first HOH to make it clear to everyone that is what he is doing. And it is already working. Ramsey is questioning who voted for him and why. Tim has taken the spotlight off of him and put it onto the house guest. I got to give him props. I don’t think any other house guest could have pulled of this kind of game play. Plus he still obtained a lot of good info on people. and about people. that he can use later on.

And finally, it has all of us talking about it. I can’t wait to see if it continues to work for him or if it blows up in his face.

I would respect Tim more if he put up Maddy and target the bitch.. Gummy bears is a Weak and lame playgame and its just stupid. What a waste of HOH

The problem with this is that in BBAU the rules are different and don’t work in this format. They can’t discuss noms ever, and at this point in the game 5 people would be nominated encouraging ppl to distribute the points on more people. This is just a “go with the house move”, pretty disappointing after all of Tim’s big talk.

Ramsey got what he deserved! Poor Dallas!!

Come on Ramsey, grow a pair of cojones!