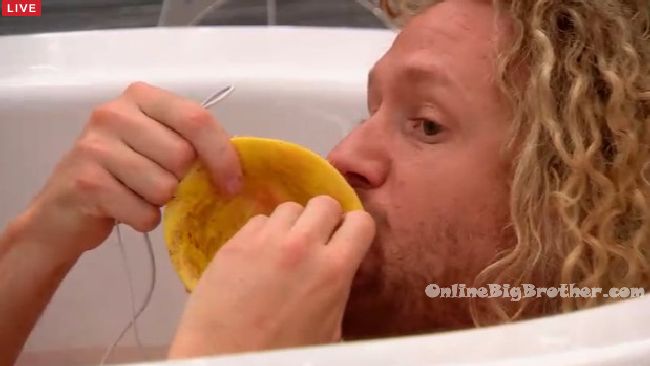 8am – 9:10am Big Brother wakes up the house guests and blocks the feeds. When the feeds come back Nikki joins Tim in the HOH room where he’s taking a bath. Nikki says that Ramsey was all over Maddy last night .. like stroking her hair. Tim says yeah that’s very strange to me. Nikki says its creepy. Tim says awkward. Tim says I know how I’m doing this. I was going to do it where they would know but that would cause trouble. I’m going to do it exactly like how we did it (BBAU). I’m avoiding the curse of power. I’m playing the role of big brother. I’m going to do the power of veto different too. Not only will you win the power of veto you will also get to decide who goes up. And they can’t hate me for it, none of them have ever said you’re in an alliance with me. So I’m not breaking any deals. I’ve never shook hands with any of them. Nikki worries if she goes up. Tim says I would help you campaign. Nikki asks if he’s allowed to do it. Tim says he thinks so as long as he stays within the rules of big brother. Nikki says I think I’m going to do Maddy and Dallas. Tim says do whoever you want. I’ll go see big brother after my bath. Cassandra joins them. Tim gets called to the diary room.

9:15am In the backyard – Dallas and Phil are playing pool. Dallas heads out to the hot tub room. Dallas says he woke up with a c**k staring him straight in his face. I don’t know what I was dreaming about. 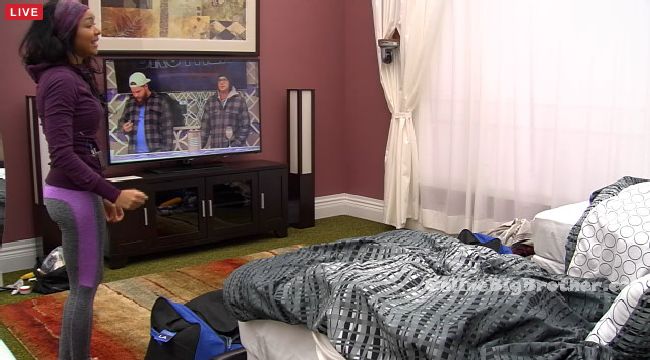 9:30am – 10:35am In the Secret Suite – Loveita says she is playing the boys. If she wins power again she is going to put Cass and the boys. Loveita looks at the TV and see Jared talking to Dallas. She says Jared does not trust him. You can see it all over his face. Loveita starts giving Kelsey advice on what she needs to do if she gets back into the house. Kelsey says that she was so ready to go home so this is hard. Loveita tells her to keep her head in the game. It could be a random draw and one of us will be back in the game. Kelsey says he thinks Tim would put up Maddy and Dallas. Kelsey and Loveita see Maddy on the tv and show disgust. Loveita says if there’s one thing we agree on its our dislike for Maddy. Maddy lays down beside Jared in the backyard. Kelsey gets annoyed. I’ll have you know if I was in there and you were out I would not be curling up next to Maddy. Kelsey comments on how Maddy is laying next to Jared when there is a whole other couch with Nick on it. Loveita tells Kelsey they might not be able to talk about being together in the secret suite but they could each give each other something. Like my green toque.

10:20am Backyard – Cassandra is showing Tim and Joel yoga. Tim says this is hard!

11:15am Tim comes out of the diary room and asks to have a house meeting with everyone in 20 minutes. He says its just an announcement about how he is going to do nominations this week.

Jared and Nick discuss if Tim is getting people to give names on how to nominate. Jared asks who should we say? I think Dallas for sure. Nick says I want to see us in the end. Jared says I know. That would be pretty sick. Nick says if you were to win, you know what he deserves it. Dallas joins them. Dallas says if its me I’m okay with it. I’ll focus on the POV. They talk about how Tim said he was bored and wanted to shake things up. He kept the most hated person on his season. Dallas says well, good luck.

Earth to Aussie come the F in you noob! He has to nom….ROFL He can’t pass the buck to the POV winner lord some folks are dumb as a sack of rocks.
It’s time to draw names for POV…………….HG’s the HOH will pick 1st followed by the 2 nominees.; Lord the stupidity of it all. At the rate Maddy is going Kelsey will rip her hair out in a week. Just hope Dallas figures he got screwed by this trash bag. Dallas win POV or your going home.
The net seems to show similar poles to ours with Kelsey 2:1 to not get voted back. They will need a contest for her to get back in. Hope Tim is a cluster F we need some excitement.

Tim you are here to play BB Canada NOT BB Australia!!

Tim’s democratic approach might work for him because he’s in the middle and couldn’t care less who goes but I was hoping he’d pick a side when he won HOH, but oh well. This type of strategy definitely would not work if he belonged to one side fighting another side of the house or if he knew he was already someone’s target.

I don’t want democracy, it’s boring. More fun when the person in power exercises their power and takes out who they want out, not who the majority wants out. Yes we get it he’s playing it safe but I would have wanted him to get some blood on his hands.

Dallas has basically called Tim out, stating he has turned the game into a popularity contest. He has asked everyone to vote for him. He is either p’ed off, stupid, or making a good strategic play. He wants to be nominated so he can play for POV, possibly eliminating being BD’d.

Does anyone know what the twist is ? Like how the person will get back in the house ?

Tim’s ego is getting bigger by a minute, he lied when he said he didn’t want to win when it’s obvious he’s fighting for his spot like the rest of the houseguests.

Hope Maddy is put on the block this week. Thought that Tim would of made a big move but he is taking the easy way out. He ruffled a lot of feathers in Big Brother Australia, but is doing the opposite in this game. Very surprised by his game play. The players that don’t have a clue in this game Raul, Jared, Cassandra,Nikki,Maddy. Players that I’m not sure of Ramsay,Tim and the brothers.Dallas is in between.Better players Joel and Mitch.

pov comes after noms, Tim. You’ve been in the house long enough to know that. It isn’t possible for the POV holder to be able to give you two names. maybe he meant that they could name the replacement, which is not exactly earthshattering. a lot of times pov and HOH work together, the pov is played because the pov holder has a say in both who is removed, and who is replacing them, hence the whole backdoor deals.

tim would be more impressive if he simply flipped, again, and put up one from each side like maddy and raul or maddy and jared or maddy and the brothers. (yes, i have a theme here), maddy and anyone.

not totally sure about maddie and jared’s actual # of votes but it looks like tim is putting up dallas and ramsay, with maddie being the replacement if the POV is used. it will be very interesting if dallas wins another veto!

Tim’s plan for the power of veto is the winner gets to decide who the replacement nominee is… so if Dallas won it could be Jared going up on the block or the brothers.

oh that’s so much better!

Something about ramsey creeps me out and I do not mean his so called game play.

So, how many of the house guests with a brain are actually going to buy Tim’s whole bloodless hands schtick? I know a lot of the ones in the house are going to get lost in the ends and means idea of as long as they get their way it doesn’t matter, but the more cerebral of them have to notice the reality of the situation. Heck, Dallas (mensa isn’t knocking on his door) almost has it in his mind correctly, but he’s not realizing the full extent of what Tim is actually doing. It isn’t about having everyone’s targets as leverage. It’s about being able to pretend impartiality to appease the majority. In a game where only one can win, not realizing that a floater is trying to float in the hoh is foolhardy.
Here’s the thing, in BBAU the house guests don’t make their nominations to another house guest. They make their nominations to big brother. The house that nominates don’t get to vote. They can nominate on alliance lines as much as they want, but they don’t get to control who goes home. So Tim’s impartial nomination system is rigged from inception in a house where the majority rule of house guest vote is the norm.
House guests this year seem to only see black and white ignoring that a third of the house is grey. Pretty silly.

Production shouldn’t allow Tim to pass the responsibility of nominating a replacement nominee ( or keeping the noms the same) onto others. If they do, it’d smack of blatant favoritism .

It’s no different than if Tim talked to everyone in the HOH room and went with the majority. He’s just trying to stay out of the line of fire. Also, the HOH almost always knows if the POV is going to be used and so that’s not a big surprise either. Tim is playing a different game from AU because BBAU – the public votes and so they like entertainment and loved that Tim provided so much. Here, the house votes (like US) and so the big personalities get evicted. Tim has adapted and I didn’t believe for 1 second that Tim didn’t want to win. It was great strategy to say that so he wasn’t targeted in the first couple weeks.