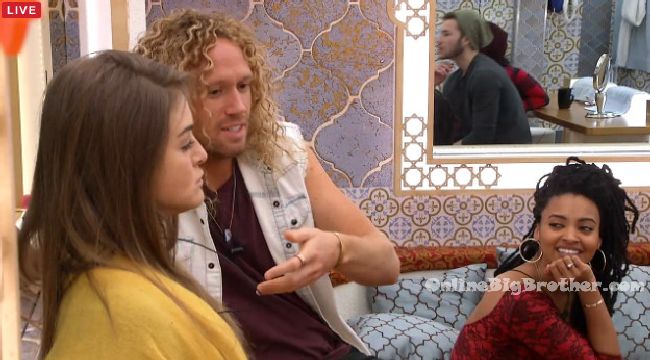 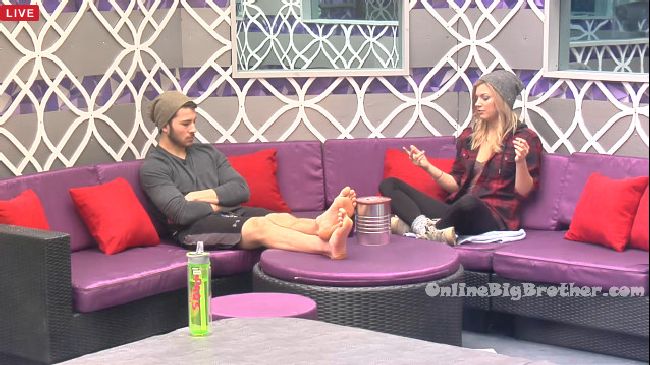 Show your support and appreciation to help keep the updates coming: Support OnlineBigBrother.com
1pm Kelsey heads out to the hot tub room and tells Phil her plan. (To tell everyone to vote out Loveita then at the last minute the 7 of them will vote out Sharry leaving Dallas, Ramsey and Maddy being the only ones to vote out Loveita. She thinks with Loveita staying she will then go after the 3 that voted for her) Phil says that Dallas isn’t a smart guy. He’s poisonous. Kelsey tells Phil that she trusts him and his brother. Phil says that Nick is going for the HOH. He’s going to try and win it. Phil tells Kelsey to relax. You’re going to start playing too hard. Its only day 13. You need to just chill and relax. Phil tells her its a good plan. He says that everyone is a threat in this game. Loveita is so anti-social it will sewer her. Kelsey says if Loveita stays and I go on the block. Phil says just because you go on the block doesn’t mean you go home. People can go on the block 7 – 8 times and they don’t go home. Phil tells her to relax. Kelsey says I am relaxed I just got excited because I felt like a mastermind. Kelsey leaves. Phil says to the cameras that she is going to f**k herself! Because someone is going to get out that she lied and did all this stuff. Its too soon. I’m glad she feels the heat though. 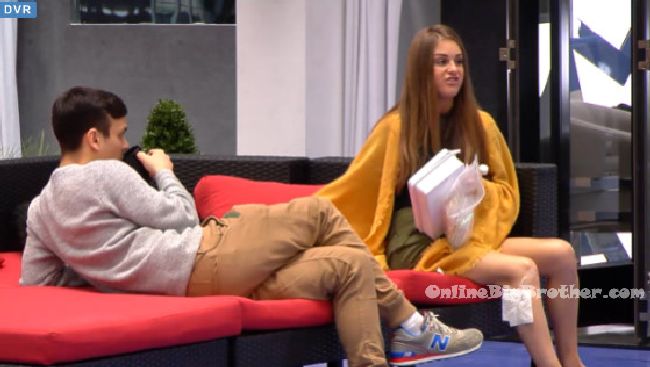 1:20pm Backyard – The feeds were blocked and when they come back Nikki gets annoyed at Tim. (I think he was talking about he blister that’s infected.) She tells Tim she is welcome to talk to her in the spa but otherwise she doesn’t want to talk to him. She tells him to keep his mouth shut and not talk about her. Nikki leaves. Tim says I get the gravity of what just happened.

2pm Jared and Mitch are playing pool. Mitch asks if he knows what people are doing with the vote. Jared says I think the consensus is Sharry but I think Loveita staying will directly affect Kelsey and I. I think there’s a chance Sharry could put me up but a 100% chance Loveita will. Mitch thinks that Sharry’s long game will be stronger. Jared agrees and says that he’s given up and wants to let things happen. Mitch says either way you have time on your side. 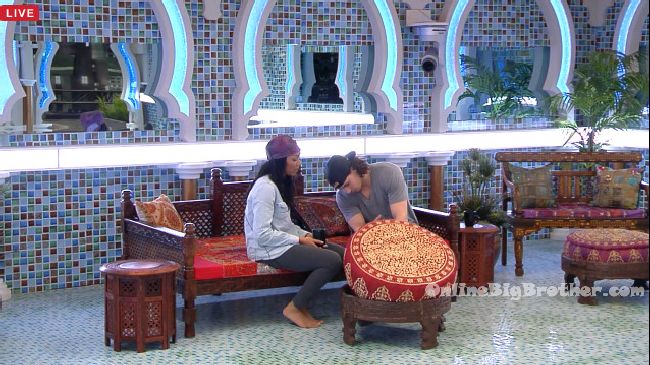 2:10pm By the Pool – Joel tells Loveita and that as of right now its locked in for you to stay. He says they agreed the next person to go is someone that’s proven to be untrustworthy. So you wouldn’t go next week or the week after. As far as I know you’ll be here. Loveita walks with Jared to the pool. She tells him that if I do stay I am not going after you guys. And by you guys I mean you and Kelsey. Jared says its good to hear that and I do think we could utilize each other more as friends. Loveita says I really do want Kelsey to know that I am sorry because I really did click with her the most. Loveita says I know you put me up to make a point and I respect that. Jared asks if you stay who are you going after. Loveita says she was sleeping in a room and over heard some people that showed they aren’t trustworthy. I honestly think you’re trustworthy and that you’re a good guy.

2:25pm – 3pm Bathroom – Tim says he has a crazy proposal. It would take a very persuasive option to pusuade our minds. At the moment our votes mean nothing because we’re cancelling them out. We decide to do double or nothing. We double up our votes on either Loveita or Sharry. Nikki says shhh.. there’s a hyena (Raul) on the loose. Tim says the risk is they don’t know who the votes are going to. It just means we have a huge affect on who goes home but its left up to fate. Nikki says and everybody better lick our a$$es!! Tim says and why are we doing this .. because you should have poured us a drink the moment we walked in the door. Nikki says I would rather be impartial. Tim says okay lets just do that. Nikki says I just want to see their faces when they say Nikki you are head of household. Loveita joins them. Tim says the only other thing he was prepared to do was double or nothing but that was reliant on Nikki being okay with it and she’s not.

2:35pm By the pool – Christine tells Cassandra that she thinks Phil and Loveita have a deal. I think he is lying about being with Loveita for sure. That’s why I wanted Loveita out. Cassandra says she keeps wanting to have deep talks. Christine says I don’t know who’s more dangerous. Cassandra says I think Sharry is. Dallas, Sharry and Ramsey are working together.
Pages: 1 2
Subscribe

Kelsey is overplaying this game, it might be that she’s either power hungry right now, or the nicotine is fucking up her head.

Can someone please explain Tim and Nikki’s big plan? I am not getting it.

Their plan is to flip for who they will both vote for (Loveita or Sharry). Double up their votes. They want to flip for it to leave it up to fate. They also won’t tell anyone who they’re voting for so that the others can’t plan for it.

Kelsey is a smoker, ew

When I was catching up on last night, and listened to Joel’s arguments for Loveita / Sharry, I realized something that hadn’t occurred to me before. Joel says Sharry won’t name who she would target. Sharry took more offense to last week’s vote flip than even Loveita did. She said she felt personally lied to by the people that promised votes and then did the opposite without saying anything beforehand. Those people were Mitch, Joel, and Cassandra. So, with whom would Sharry be least likely to share information about who she is targeting? Oh, right, the people whose betrayal set the wheels in motion for Kelsey to knock three people out in the hoh comp leading to Jared winning and Sharry going up on the block. Now it makes sense to me. I couldn’t figure out why her campaigns seem so weak or non-existant to some of the house guests.
Or maybe she just doesn’t campaign very well. 6 of one half dozen of the other.

A different perspective to the coin toss vote proposition:
Got to sting a little if the two nominees are being told you’re both so irrelevant to us that we really couldn’t be arsed deciding which one of you to keep.
Might be true, but ow.