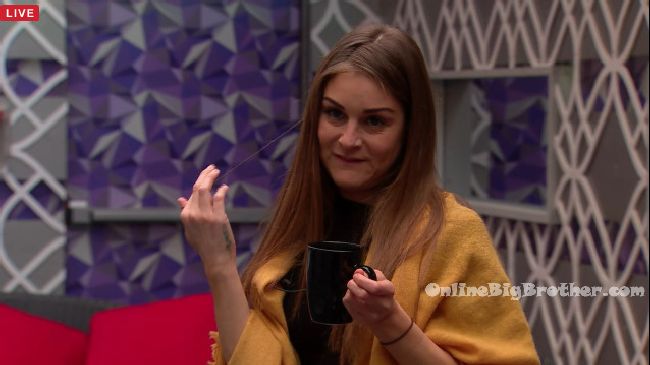 3:10pm – 3:30pmTim explains his double or nothing plan to Joel, Jared, Mitch and Phil. Tim says for it to happen Nikki needs to agree to it. Nikki says that she will think about it. Tim says we’re still leaving it up to fate. I just think we’re being boring for Canada just doing nothing. We have the power of big brother, that’s all I care about. I want to kill big brother so that I become big brother. Tim says that both Loveita and Sharry need to be on board with it. Nikki says I like them both equally. So we decide? Tim says no, we don’t decide. We leave it up to fate. Nikki says okay I’ll do it. Nikki leaves. Tim says its evil. I just thought about it and its evil, I don’t like it. We’re playing god. Tim goes to talk to Nikki by the pool. Tim asks Nikki if she likes to gamble? Nikki says yes. Tim says the best part of it is that all the others can’t make any plan. We’re stuffing up their game. Will it make them come after us? Nikki says it will make them talk about us. Tim asks if he and her should go into the diary room to explain it to big brother. Nikki says she doesn’t think Loveita will want to do it. They agree to ask Loveita how she feels about it. Nikki says we have to play the game but can’t we be a power couple? Tim says yes. Tim suggests he and Nikki plan a pretend fight to keep it a secret they’re working together.


4pm Bedroom – Raul asks Loveita if I give you my vote what will happen? Loveita says that she wants him to vote for what is best for his game. Raul says its not that I don’t like you. If I keep you in the house I want to make sure you won’t come for me, Kelsey or Jared. Loveita says no, we’re even.

4:50pm The house has quieted down. Their eating, giving massages and meditating.

Kelsey is overplaying this game, it might be that she’s either power hungry right now, or the nicotine is fucking up her head.

Can someone please explain Tim and Nikki’s big plan? I am not getting it.

Their plan is to flip for who they will both vote for (Loveita or Sharry). Double up their votes. They want to flip for it to leave it up to fate. They also won’t tell anyone who they’re voting for so that the others can’t plan for it.

Kelsey is a smoker, ew

When I was catching up on last night, and listened to Joel’s arguments for Loveita / Sharry, I realized something that hadn’t occurred to me before. Joel says Sharry won’t name who she would target. Sharry took more offense to last week’s vote flip than even Loveita did. She said she felt personally lied to by the people that promised votes and then did the opposite without saying anything beforehand. Those people were Mitch, Joel, and Cassandra. So, with whom would Sharry be least likely to share information about who she is targeting? Oh, right, the people whose betrayal set the wheels in motion for Kelsey to knock three people out in the hoh comp leading to Jared winning and Sharry going up on the block. Now it makes sense to me. I couldn’t figure out why her campaigns seem so weak or non-existant to some of the house guests.
Or maybe she just doesn’t campaign very well. 6 of one half dozen of the other.

A different perspective to the coin toss vote proposition:
Got to sting a little if the two nominees are being told you’re both so irrelevant to us that we really couldn’t be arsed deciding which one of you to keep.
Might be true, but ow.