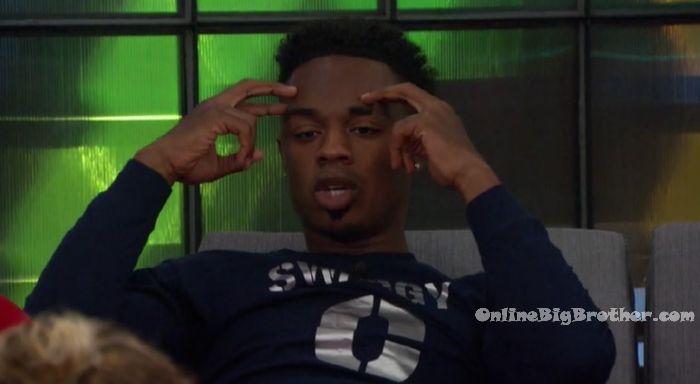 12pm Backyard – Backyard couches. Steven and Scottie are talking about Nicolas Cage in Ghost Rider and other movies like Batman.
At 12:20pm Faysal gets another Hamazon Swine delivery. 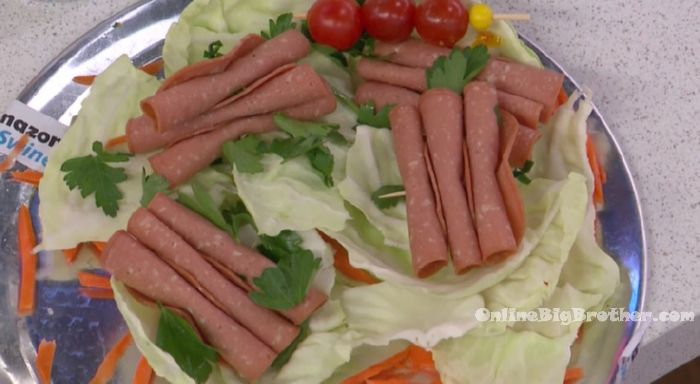 12:24pm Bedroom – Bayleigh and Swaggy. Swaggy – speculations about me and you. Bayleigh – to everyone? Swaggy – no, to Scottie. About how he thinks you and me are a showmance. Bayleigh – that is so annoying! Swaggy – but there is a way to deflect the attention off of us. Bayleigh – ok, how? Swaggy – I’m going to talk to Winston. Talk to him and let him know that people are looking at him. So now he is on edge. Bayleigh – that him and Angela are a showmance. That him and Angela are going to become a power couple and try to take everyone out. Swaggy – because if he has that in his mind, then he won’t f**k with us. Bayleigh – then he will back away from Angela. Swaggy – he thinks he is walking around all squeaky clean. Also if Winston knows that, Brett knows that so he won’t go after us. We plan on winning HOH but if week four we may have to watch them gun down Kaitlyn and Haleigh.. which sucks. Bayleigh – we need to get Haleigh. This morning Brett said that Haleigh’s been flirting with me a lot, do you think she likes me? So he is never going to come after Haleigh, if he likes her. Swaggy – how do we deal with that? Bayleigh – I think we tell Haleigh the same thing that the boys are starting to notice that you’re talking to all of them. Swaggy – cool! Bayleigh – she will just chill. They’re starting to talk to each other and a bet that you made with both of them.. Which is true. Swaggy – as our five, we have to look out for each other. Bayleigh – I have to tell you something but you cant tell anyone.. Kaitlyn and Haleigh are in a fight right now. Kaitlyn was mad because Haleigh wasn’t being sensitive to her. 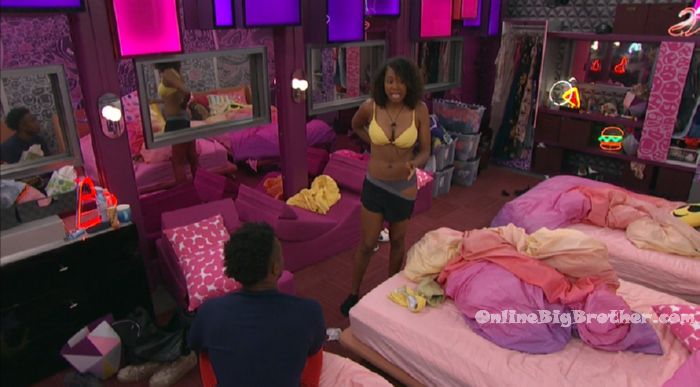 12:45pm HOH room – Swaggy talking to the cameras. Swaggy – Haleigh will spend 2 hours with Brett. Sit on his lap, massage his hair .. then she will go flirt with Fez for an hour and a half and then come up here and sleep with Tyler for 2 or 3 hours and then get up and go sleep with Fez. Fez doesn’t like that. Haleigh is just a flirt. She is my partner and on my team. She just likes flirting. Kaitlyn – there is a problem with Kaitlyn now. She is very needy. Twenty four year old grown woman but she’s needy. She has a boyfriend back home so she told Fez they can’t sleep together. But then she tells Fez he can’t sleep with Haleigh either because she’s jealous. Like you’re my best friend, I don’t want you being with another girl. Kaitlyn has a boyfriend Joey back home but…big brother blocks the feeds. Kaitlyn and Haleigh are in a fight right now because Kaitlyn approached Haleigh being respectful about me and Fez’s relationship. Yada yada yada x y and z..
FLASHBACK to any point in the season!
Click here for your: FREE Trial! 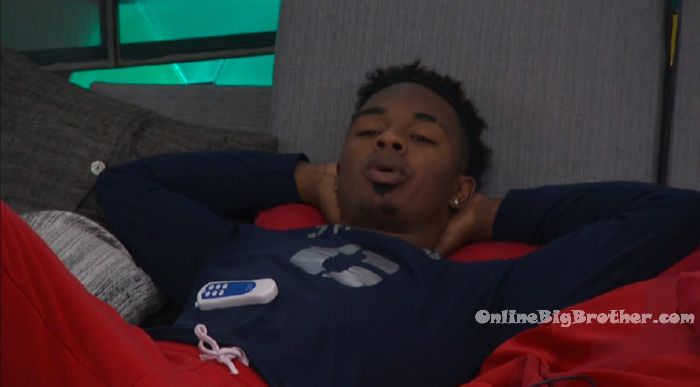 Now with me and Bayleight .. Everyone (America) knows that Bayleigh and I are in a showmance but to everyone else (the house guests) they all think we’re like brother and sister. Only Fez and Haleigh know the real truth. Now Winston is starting to observe and plot that I think Swag and Bay are in a showmance. I’m going to cook Winston’s dumba$$! I’m going to throw his a$$ on the block next week! But here’s the kicker, today I am going to throw him aside and tell him that he’s a threat to everyone else in the house. I am going to tell this because he needs some fear in his heart. He is walking around like that if anyone wins he is safe. Like no one is going to put him up because he’s Winston. Usually when someone tells you some information in the house you trust them a little more. Scottie tells me information all the time and that builds trust. So like if I win HOH, Scottie would never go on the block. Not as a pawn, a backdoor, nothing. So if I tell Winston that he is a threat and that the other side of the house.. which is my side are throwing his a$$ on the block like no matter what… so he will look at me like I bridged the gap. If he wins HOH he will put up Haleigh, Kait or Rockstar. My first priority is me and Bayleight, then Scottie and Fez second. Angela and Winston are a secret showmance .. a lot of people are speculating they’re together. If Kaitlyn and Haleigh continue to fight over Fez then one of them will go to the other side and then we won’t have that number any more. Me and Bayleigh are on operation .. its called operation I don’t know. I’m calling it operation “Rock Rave Rock” 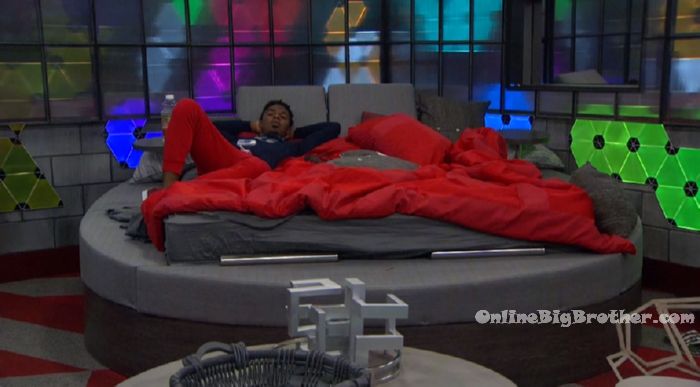 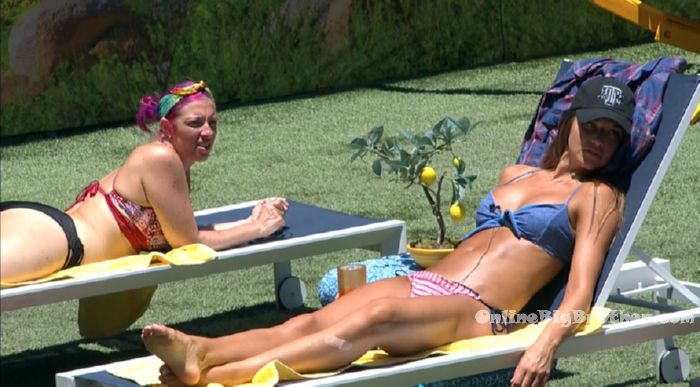 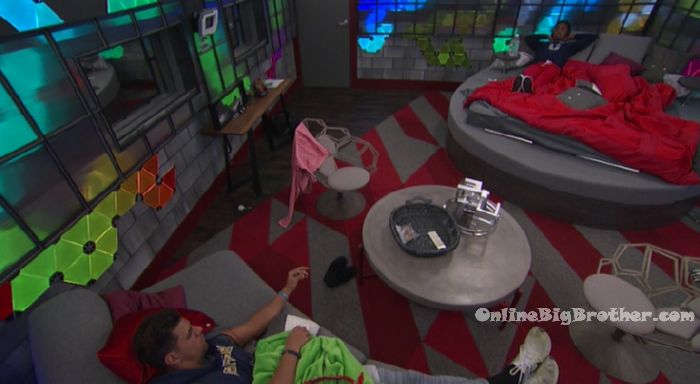 1:45pm Big Brother blocks the feeds and starts playing BB re-runs. The block is likely for the Power Of Veto Ceremony…

Reality check in lane one please! ?

Swaggy has no grasp of what people really think about him – from housemates to the viewing audience. And until he does some self reflection (after he doesn’t “trend” and doesn’t win comps ) we are stuck listening to him. Hopefully the houseguests will get sick of listening to him too and send him home. There’s a number of “self confident” people there right now that have a different idea of how people perceive them! Lol

If swaggy stays in the house all season I’m going to go crazy I already hate him and I’m hardly watching or reading what’s going on because I’m on vacation, I can’t imagine ho2 much i will hate him if I was really paying attention.

Swaggy is so full of himself but so dumb. Everyone in the house knows he & Bayleigh are kissing and snuggling up every night. He even said he and Bayleigh hooked up in the HOH shower before Feeds were on. He thinks he’s a mastermind running the house. He can go next week please..

Rock-Rave-Rock will not work. Winston will listen, then when Swag leaves, he will bust up laughing. Shag should call it, Crumble-Cheese-Crumble!!! Swag is full of himself, but he entertains me more than the other Swag’s. I would not want to be in the house with him, though. But looking in, he makes me laugh with his self grandiose antics that are totally self absorbing and have no merit at all with anyone but Swag. I truly wonder what his friend are like outside of the house, are they all the same?

Can Swaggy C just be evicted already? The fact that he’s this delusional and thinks these Houseguest are stupid and America Likes him is just mindblowing to me .