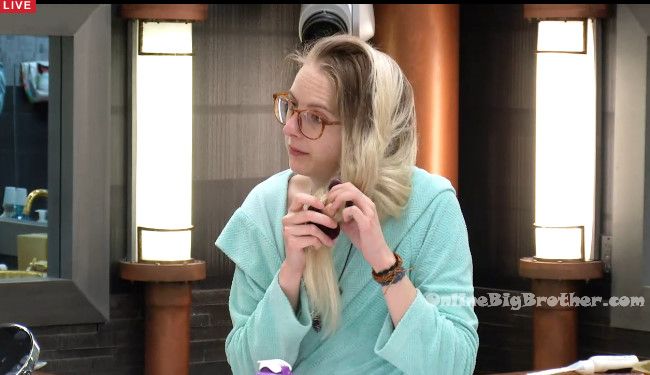 4:30pm In the bathroom – Zach and Sarah are talking about Bobby’s secret veto. Sarah tells Zach that Bobby told Sindy about it. Zach says I think he has it because of how safe he is walking around this house. Sarah questions if that’s a good thing to lie about. Zach says and him throwing the HOH’s drives me absolutely nuts! Sarah agrees. Zach says I go into HOH’s with my heart beating out of my chest. Big Brother blocks the feeds.


When the feeds return – Brittnee and Bobby are driving. Brittnee says I really trust Bruno. Bobby says yeah I’ve been with him since day 3. Brittnee says now that it gets down to it people are starting to talk game. Bobby says it all happened when JP got evicted. Brittnee says it had to happen. Bobby and Brittnee talk about their lives outside the house. Bruno and Zach take over the driving. Bruno says that Sindy has been trying. There’s not much I can tell you. Zach asks what has she been telling you? Bruno says just that she’s all alone. I told her I can’t work with her because she threw us under the bus. She tried to say lets fresh start. No sh*t you want a fresh start, you can’t throw me under the bus and think we can just get a fresh start. Bruno says too bad man she’s a beast! A beast! Zach says she’s smart. They talk about how a double eviction has to be coming up. Bruno says we just have to plow through it! We’re on the right side of the numbers. Bruno says that Sindy was telling me that she wouldn’t go after Bobby. Zach says oh she said that!? Bruno says she doesn’t understand where the lines are drawn. Bruno says he told her we’ll talk in a couple days and she said we don’t have two days. I said okay we’ll talk later. She realizes that we’re all together. She doesn’t realize everything gets around. Bruno says we’re set up strong dude. Like we can plow to the end. 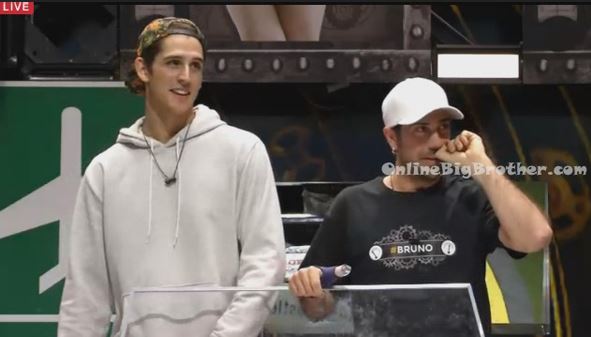 In the bedroom – Sarah is questioning Willow about her diary room. Willow says I can’t break the rules. Sarah says when you see this when you get out please don’t be upset with me. Willow asks why? Sarah says I was just frustrated that you never used to tell me anything. Sarah says that B is really anxious. Willow says I wouldn’t mind losing to you. Sarah says but you don’t want to lose either. Willow says as long as I get one vote. Sarah tells Willow that Zach said he never once did (She hand gestures “the chop”) in the diary room .. he made everyone else be so loyal to it when he wasn’t. That’s how good he is.

5:45pm Big Brother blocks the feeds.
6:17pm – 6:35pmThe live feeds return – The house guests are on an indoor lock down. They’re all sitting in the living room fairly silent. They comment about Marsha the Moose asking “Where’s Peter?” (Sounds like Marsha made an appearance on the backyard screen.) They try to nap and big brother tells them nap time is over.

6:50pm Up in the bedroom – Sindy, Bruno and Brittnee are putting the cleaned sheets back on the beds. Brittnee asks did Bobby tell you that Zach was throwing out Bobby’s name. Bruno asks he was saying that on the treadmill? Brittnee says yeah. Bruno says Ash was throwing Bobby’s name out in the hot tub too to be a pawn. Zach was telling me that we have to get all these people out like Brittnee, Bobby.. He is just panicking but don’t worry what we have is so solid. Ash joins them. Britt leavees. Bruno says I’m sure you’ll be okay Ash. I’m sure it will be small. Ash says I hope so.. Bruno says what a daggar eh?! It was to be expected. Bruno says we all thought it. Zach joins them and asks what? Bruno says the videos. Zach comments how we’ve been doing small tasks and getting big rewards and then we do this big one and… Bruno says we got to see across Canada though I guess. Bruno leaves. Ash says Ashleigh please go to the diary room and shove your head in a garbage can. Or Chum. ..They’ve done the chum one right?! Ash tells Zach she’s stressed about her punishment. It’s going to be an every hour thing for sure. Ash asks Zach if she he is going to go hard for the HOH. Zach says yes. She asks him who he’s going to go after. Zach says he wants to b@ckdoor Bobby.

7:15pm In the living room – Brittnee comments to Sindy that it said we “Successfully Completed the road trip.”

Dawg – Why does your calendar above say the next POV is May 29th? Is that a typo or do you have some really good inside information about the next several weeks?

LOL thanks .. I guess I figured there would at least one more pov between now and the end of the season. I changed it to April 29th because we’re guessing it will be a double.

Is this week double eviction?

It’s supposed to be a triple eviction… three noms and two of them leave the house.

We should find out on tonight’s show what they have planned. Should be triple eviction. http://www.onlinebigbrother.com/big-brother-canada-3-two-round-hoh-this-week-with-3-house-guests-being-evicted/

willow is in a good position FOR NOW
she’s got the diaper’s telling her everything
but once she is revealed, she’ll be the diaper’s number 1 target since they will feel betrayed
so right now, i can only see sarah, bruno, godfrey, or kevin winning

i see ashleigh and zach going before kevin and pilar

I think it was actually something Sindy suggested as a joke, while they were on the beds in the vault. When she left for a bathroom break, Bobby decided to use it to his advantage. Sindy really should have picked up on that… Plus these “Super fans” should have remembered Adel’s veto. At least Adel did have something to actually show the others…Bobby is just “saying that he has a veto”??? And saying it is a secret??? Bigbrother would have busted him by now….I think he should do what Bruno suggested, that, after Sindy goes, next time he is called to DR he says they took it from him because he leaked he had it.

It’s really sad to watch. And then the mayor was nowhere to be seen for hours. I don’t understand why law enforcement isn’t more transparent in their investigations. A person doesn’t just randomly have their spine broken while in custody.

Did you see the video clip of Baltimore MA Mayor Stephanie Rawlings-Blake at a press conference talking about giving the protestors space to practice their freedom of speech and then saying, “We gave those who wished to destroy space as well.” WTF???

Your right to freedom of speech doesn’t include rioting, arson, robbery, destroying cars and businesses, and violence. Turn the hoses, rubber bullets and tear gas on them – full force. If that doesn’t work, shoot ’em.

Being anti-protestors is being anti-American. If colonist never protested, and rebelled against the British, Americans would not exist today.

I don’t condone the violence that exploded today, but it’s hardly unfounded. It’s no secret that injustice still pervades American society and our legal system. The only people who think otherwise are the people who wear blinders to people different from themselves, and ignore that all things are interconnected. What affects on group will ultimately affect all groups. Society is not so different from any natural ecosystem.