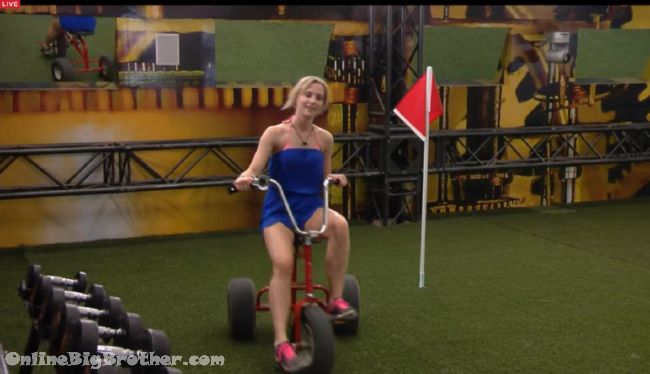 (please note video’s are taking an awful long time to process on youtube.. Sorry it’s out of our hands) 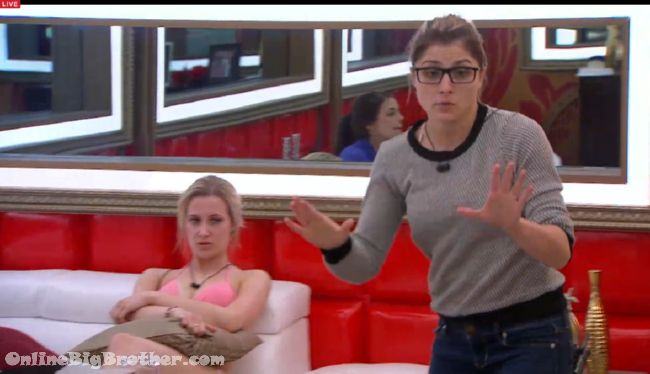 7:20pm HOH Willow, AShleigh, Pilli and Zach (FYI Willow is fishing for information)
Willow tell her she thinks Bobby has the veto, “Sindy told me” Pila wonders why he would tell Sindy because he hates her.
AShleigh says her nominations were going to be Godfrey and Bobby but she’s sure Bobby will win the veto so he has to be backdoored.
Willow asks who she should put up.
Zach says put Bobby up and if Veto is played Bruno goes up
Willow – should I put up Bobby and kev
Zach – if you want to put someone up on our side
Zach asks her if she’s thinking about putting Godfrey up
Willow – I was thinking of putting him straight up.
Zach says he’s not putting up Bobby until his Secret Veto is over. He suggests they put Bruno up as a pawn.
Zach – you should totally do God and Bruno.. Bobby won’t use it (Secret veto)
Pilar says Bobby and Bruno are sitting pretty they’re
Willow – Who does Kev want up
pillar – I don’t know
Willow – He obviously wants God that’s his number won
pilar – ya
Zach – you have to take out your immediate threats Gods coming after us ..
They seem convinced it’s going to be a crapshoot Head of Household competition.
Bobby comes in 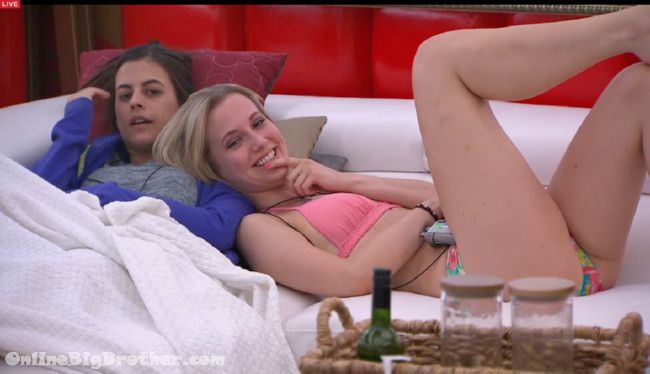 random chit chat going on in the Hoh Room.. at 7:38pm everyone clears out leaving Zach and Ashleigh to bubble bath.. 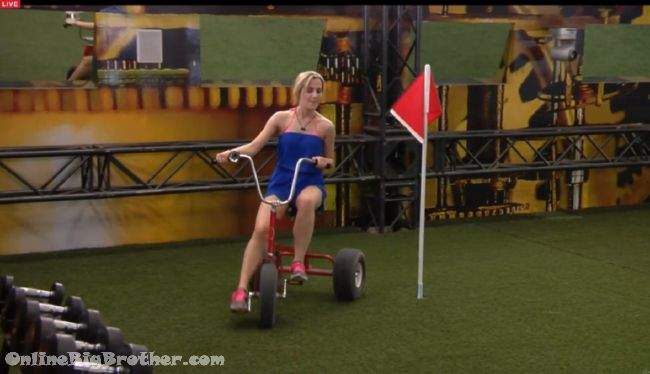 8:11pm Ashleigh’s punishment do 300 laps in a giant tricycle 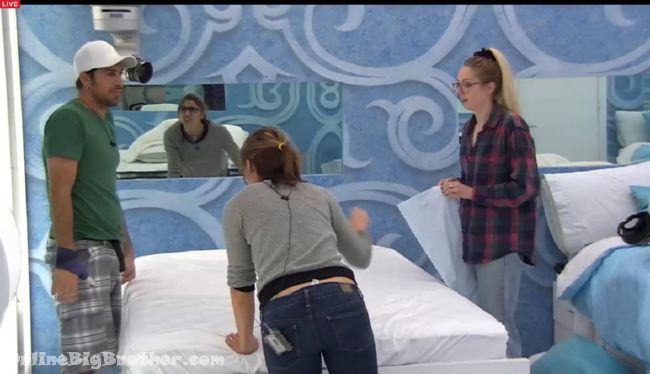 8:15pm Bedroom Bruno Willow and Sarah
Willow lets them in on her conversation with the Diapers. Willow tells bruno she can’t do it anymore talking to the Diaper, ‘They are f***g nuts”
Willow says they are wanting to backdoor Godfrey and she thinks they are going to put her up.
They told her they aren’t putting up Kevn as a pawn.
Sarah – doesn’t he realize how F***g obvious he is
Bruno – He’s f***ed
They all agree the Diapers are going down. Bruno says he’s got a speech all ready he’s going to crush it.
Willow says that Zach and Kevin have a plan if it’s A or B she explains their plan is for kevin to pick A and Zach picks B.
Sarah – if’s A or B we should all partner up and each pick opposites..
bruno – you think it[‘s a good idea… they know all the answers
Sarah – Ya
Bruno thinks it’s risky says that the first questions 50% of them are knocked out right there..
Sarah says she’s going to have to think of that logic.
Pili join them. 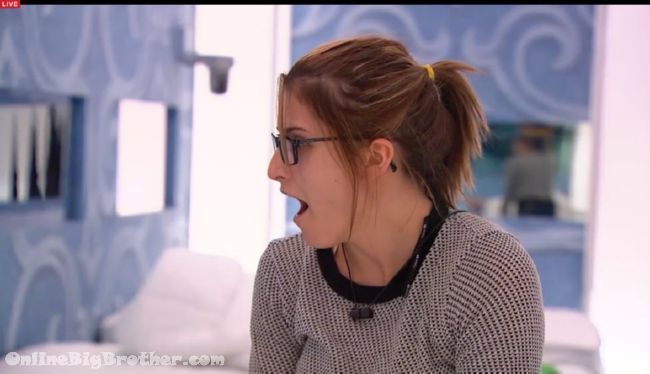 8:24pm bedroom Sarah and Willow
Sarah says she agrees with Bruno they shouldn’t alternate their answers if it’s A/B. 1/2 of them will go out first question. Sarah says Bobby told her he doesn’t have a secret Veto. Sarah says Brittnee told her she doesn’t trust Willow.

Willow says she’s certain she’s going up if Zach’s side wins HOH.
Willow – I’m going to leave here and be in a psychiatric ward ward for 10 years

Can we talk about Sindy and Godfreys speeches at the Veto meeting? I feel bad but damn she literally did everything and nothing can save her. Godfry is my favorite cast member this season lol. Sindy with an S will be missed.

Literally, Sindy is hands down the SMARTEST female BBCAN player to this date. She played the heck out of the game, she knew what she was doing. She did absolutely everything possible for her to save herself, and you know what? The reason she’s being is evicted is because Pilar is a sheep, has no mind for her own, and made a terrible game move, at Sindy’s expense. I feel awful for Sindy, and I think she deserves a Chevrolet Powershift.

Sindy had everything she needed to go far in the game. She’s smart, strong, sensible and to add to that, all the info from sequester. However, she made major blunders 1. taking JP out was good but blindsighting your own showmance when you dont have an alliance to back you is dumb. 2. Lying about the blindsight means the people you were with in the blindsight dont trust you, and when the other side finds out you were the 5th vote then you’re screwed. There are more mis-steps I can list but I don’t want this post to be too long!

I totally agree, I’m still grasping onto hope that ‘something’ happens and Sindy stays. The secret power really needs to happen now, I believe it was revealed by this time last season so my fingers are crossed. This show will end up back in the toilet if she goes. What would be left worthy of watching… the last 15 mins of eviction night.

Me
Reply to  Tinashe

If Sindy is the best game player there has been, isn’t it a GOOD game move of Pili getting out such a strong BB player?

These sites are filled with people who call people bad players just because they are taking out a favourite. It doesn’t work that way.

If in your opinion you think Pili made a good move, stand by for when her puppet masters gets pinged off. That girl is likely to have a break down.

I’m super pumped that Willow is going to help take them out… I just am so fricking sad that Sindy won’t be here to play the game anymore. The way that Sindy was winning, got set back, then was about to win again, and then got ELIMINATED was so sad.

Thanks to Bobby who’s IQ is super low

Willow sketchy and she was best positioned Wednesday IMO. The girl isn’t going up unless its Sarah/B then I think they’d nom GOD as the 3rd.

Today’s espisode was one of the most cohesive to date. Normally it seems like they have strung together a bunch of scenarios to make one show. I also take back my comment about the tasks. I thought it was hilarious when I saw the entire challenge. Four people attempting the same task and Bruno blocking them every time. Good show today.

Anonymous
Reply to  The Truth

It was better than past shows, However, if I was watching the shows only I would be very frustrated. So mUch air time has been given to uninteresting story lines and very little given to how the house is set up. I realize BB is a marathon game for the HG’s, but it should not be so challenging for the viewer to figure out the alliances within the house.

Daaamn! Willow really is loyal with Sarah now is she? Not even surprised i understand, it must be frustrating talking to the diapers. But at this point im almost convinced that even Ash would make a bigger move than captain coward zach (at least thought of it)

why is ashleigh being punished

Good question, I was wondering that myself.
Hopefully and answer will arrive : )

Somebody help me as I am lost as to what team Willow is on. Zach tell’s her to put up Bobby or Bruno but yet when Willow talks to Bruno and Sahra she only says they want to backdoor Godfrey. Did I misread that or does it seem Willow is playing both teams atm?

i think her no1 loyalty is to Sarah. Winning the upcoming HOH (assuming its DE) will expose her allegiance, i think its best for her game to throw the HOH for Sarah/God/Brit/Bruno

The Diapers did say they may backdoor Godfrey and put up one of the 7 as pawns to throw off the scent of the Chop Shop. None of the Diapers would go up as pawns, so that leaves Bruno, Bobby and Willow. She is aware that if she goes up as a pawn she may go home.
Willow has not been with the diapers or the 7 for the past several days. Bruno, Bobby and Sarah have been working her.
Where are her loyalties? Primarily Sarah, but also Bruno.

simon or dawg: does it look like the alliance of sarah/brittnee/bruno/bobby/gofrey/willow is real or are some of them lying/faking it? so confused…
also, why doesn’t sarah see that keeping sindy is better for her because brittnee is so wishy washy and throws her alliance under the bus every chance she gets…

makes sense, even though i hate it. thanks!! :)

It would be in Willow’s best interest to throw the HOH comp. I just pray that Godfrey, Sarah, Britt, or Bruno (though he’s been too cautious before) win. 3 Diapers go up and 2 leave. Zach/Kevin leaving would be ideal.

Then the house needs to target Bobby. Sindy would probably be staying this week if not for that fool.

I figure a lot of you have much more knowledge of past seasons of bb. both Canadian and US. I’ve watched some seasons, but missed some as well. I have a question:
has anyone ever won big brother without ever having won head of household?

TeamSarah
Reply to  another name

I think Dr Will did not win a comp.

sometimes i feel that willow honestly needs a psych ward… i mean, she’s been having breakdowns all over the place. She said earlier that she would rather be home, had another breakdown over not being in the loop ever, and she had yet another one claiming that ‘zach practically abuses her’. I’m not a fan of zach by any means, but that’s just ridiculous and uncalled for.

Besides, despite being a super fan, even peter and naeha and alec have all called her out for being what she is…IRRELEVANT.