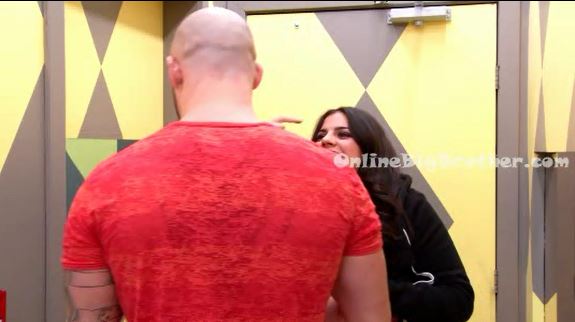 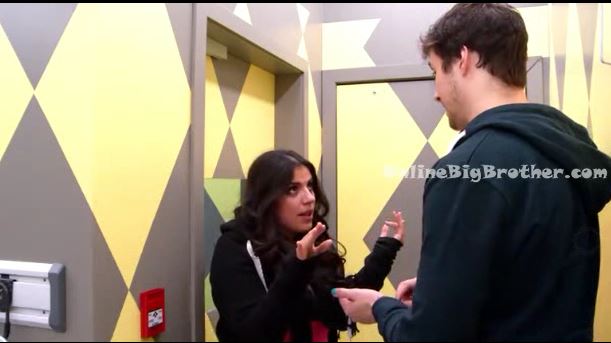 1:45pm – 2pm When Big Brother ends the backyard lock down the house guests run to the door to see if anything is different. They look inside as the door opens and realize that nothing has changed. In the storage room – Sabrina talks to Jon. Jon says she is f**king weird. Sabrina says that she didn’t go tell anybody .. I didn’t repeat this to gordo (Andrew) because I didn’t want to put stuff in his head. Jon asks so you want Allison gone eh? Sabrina says I don’t care for Andrew in that way ..honestly. Sabrina says I feel like you protect Neda and Andrew will protect me. JOn says and you’ll protect him. Sabrina says I will protect him until I have to. Jon says he is definitely not someone that has to leave any time soon. I have his back and I think he has mine too. Sabrina says he has you and Kenny’s back in my personal opinion. Jon says I have those boy’s back too, you know what I mean. Sabrina says its not like I am in with him .. I just don’t think he would put me up. Sarah and Rachelle join them and the conversation ends.

2pm Big Brother blocks the live feeds.. When they return – Sabrina is in the storage room talking to Andrew. Andrew comments on how is surprised he isn’t going up. I dont know how that happened but.. Sabrina says because I am that good.. Sabrina says I am never exposing the first five to her (Rachelle) ever. Sabrina tells him that Rachelle trusts her so much more than she trusts the other one. Andrew says yeah absolutely. Sabrina tells Andrew about her conversation with Jon. Sabrina says that Jon asked “we’re good right? You know me, gordo and kenny have your back. Sabrina says f**king A$$HOLE! Because he’s scared that I know he’s against you! And I was like yeah I know you guys are working together. And I’m like you have to understand I trust gordo.. I am so happy you guys have his back because he is the one that looks out for me just like you watch out for Neda. Sabrina says he says yeah I have his back which means we have your back! Sabrina says F**KING D**K! Sabrina throws up her middle finger. They leave the storage room. 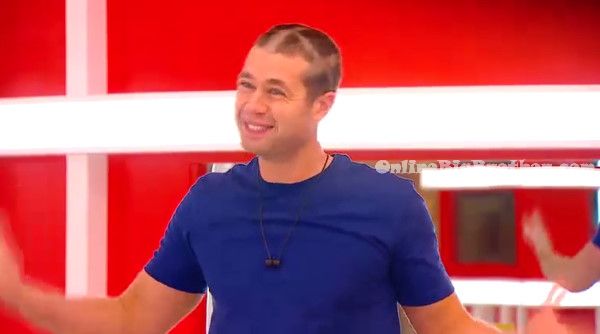 2:15pm – 2:30pm Big Brother blocks the live feeds.. When the feeds return – In the bedroom – Sarah, Sabrina, Rachelle and Neda talk about whether or not Rachelle should let Ika know she’s going up on the block. Sarah says maybe right before. They change their mind because they don’t know if the ceremony is happening yet. Sarah says maybe when you see the POV Ceremony on the living room screen then pull her aside. Meanwhile.. Arlie walks through the living room where Andrew and Jon are sitting. Jon calls him a turd. Arlie says you’re not going to be calling me a turd for very long. Arlie comments on how he’s going to fix his hair because he looks like an idiot. He says not that I mind looking like an idiot, I just don’t want to go out looking like this in front of all of Canada. You know what I mean?! Arlie heads upstairs and grabs Sabrina to cut his hair. Arlie says come join the partay hot dog! And Sarah! They head to the bathroom, then Arlie heads back to the bedroom and str!ps down n@ked in the room to change. He heads back to the bathroom and Sabrina cuts his hair. 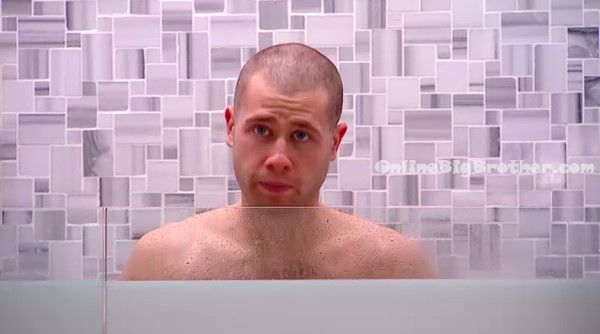 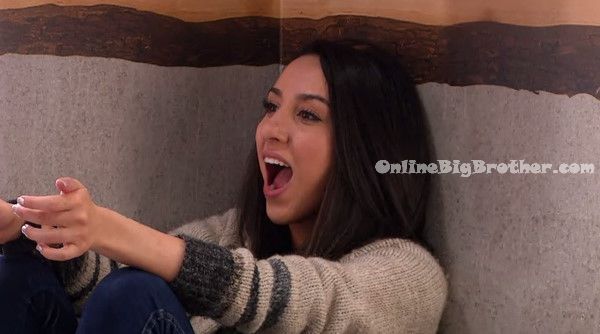 3pm – 3:15pm In the living room – IKa cries to Andrew in the living room about how no one talks to her and how she feels so alone. Meanwhile Rachelle notices that her HOH room door is locked. The other house guests wonder why its locked. They wonder if the HOH spy screen will be turned on or if they’re just changing the bed sheets.

3:10pm Arlie heads into the diary room.. Soon after the live feeds are cut… 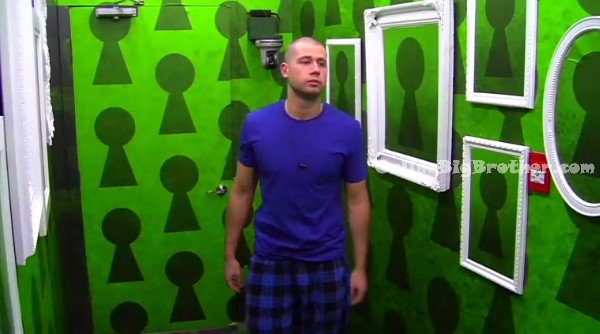 3:30pm When the live feeds come back the House Guests are playing a cupcake challenge stacks game on the kitchen table:

I hope Ika punches out Sabrina

Omg PLEASE EVICT SABRINA! Imagine if her an Andy where on a show together omg…..

Agreed…. she has this house under control. People I know are comparing her to Andy, which I think is inaccurate. Andy just played both sides and did nothing, whereas Sabrina is actually moving players against each other and such. She is playing a great game, but her attitude and petty jealousy/insecurities and vicious attacks on people behind their backs makes me hate her…

Seriously, she is a horrible person.

It will blow up in her face sooner or later. Hopefully sooner.

I don’t think it will blow up in her face. Seeds of doubt fester. And she is the only one in the house that talks to everyone.

Sabrina is a catty bitch. Being a middle school gossip is advantageous in the big brother house as long as you have the support to do it.

I just realized that’s what she’s doing….as a person in the house I can’t stand her but she’s running that house and playing an amazing game. I have to respect it.

I just found out that Emmet from BBCAN 1 has entered the big brother house in South Africa to stir up some drama lol. That’s so cool cuz big brother Africa is my one of my fave and I love Emmet

Yeah, he’s awesome. He didn’t get enough credit for being a great well-rounded player.

he wasn’t really my favorite but that is so COOL. he got all all expense paid trip to south africa and be a part of another big brother.

Somebody Play The Game Other Than Sabrina

The only reason why Sabrina is controlling the house is because not anybody else is willing to assert themselves to play the game except for Adel and his hands are tied as he has no one really to work with…. especially if Ika leaves this week .

As annoying as she is and as much as I despise her, Sabrina is running that house right now

I can’t wait to see this meatball’s ass up on the block. I wish someone would go up against her and call her bluff she needs to be confronted .. *** middle fingers in the air***

Sabrina is a master manipulator. As much as I hate her so very much for the kind of person that she is, she really has a great chance of going far in this game to the extent of winning. After all this is Big Brother, a world of lies, deceit, manipulation, betrayal, etc… all the negative values in the world for the tune of $100,000.00 I was very hopeful last week when Ika was trying to put Kenny and Gordo up the block but now I rest my case. I think production will do the best they can to help out Sabrina win. She is even portrayed in TV like a meek and innocent looking person, geezz!!! wanna vomit!!! ewww!!!….

Where can you watch diary room videos?

The Diary Room Videos are only televised during live shows and we don`t get to see all of them.

Is Arlie currently fulfilling another Marsha the Moose challenge?
Right after his talk with Andrew about “you don’t listen to me”, now he has the same conversation with Rachelle, he even said “I feel like you’re being a Bitch to me”.
Seems like something he’d only say when he knows he’ll get to say “guys, that was all just for show!”
Either that, or he has a new strategy… Or he’s genuinely down.

He is avoiding eating the slop because he can’t stomach the taste. So he is slop affected. Not a good time to not have his head in the game.

oops wrong. It is a task. didn’t see the following post.

I think he’s just playing the game, to make himself look less of a threat.

But yeah, it could be a task. Rachelle actually just said to Sabrina that maybe he’s doing a task.

neda is a great girl, and hilarious at times

beautiful inside and out