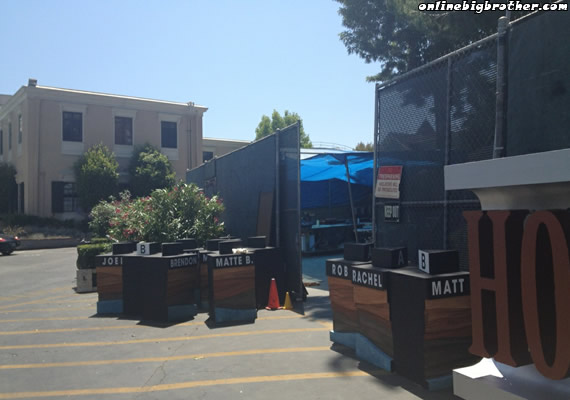 A timetable of what to expect for BB14. These dates are not mostly unconfirmed but are extrapolated from what has happened for the past 3 years. The only confirmation we have is that Media day was June 22 and The Season start date is July 12. Unless CBS has changed the Format of Big Brother I think these dates will be a pretty close estimate of what’s to come for us BB fans.

CBS invites the press to spend a day in the BB14 House where they take part in competitions, nominations, evictions the entire condensed Big Brother experience. This year from a leaked photo we get to speculate who has participated in this event. Last year Official Media day pictures were revealed on June 27th along with pictures of the BB house.
Here a list of names that could of participated from the media day event

BB14 Cast is placed in a Hotel and forced to watch old season of BB. At this point they are isolated from outside news/media sources.

Matt Whitfield who participated in Media Day tweeted that he’s gagged about Media Day until July 2.

On June 22 Global TV’s John Powell posted that July 2 will be the date we find out about the Cast and Twist, 11 Days before the start of BB14. Shortly after it was posted this information was removed from Global’s website. Last year the House pictures were released on June 27, 11 days before the season premiere. It’s safe to say something is going down on the 2nd and it’s going to have House pics in it.

Sometime during this week “The Talk” spends a day in the house. According to CBS’ Schedule The Talk will not be in the Big Brother House during the Week of June 25 this only leaves the week of July 2nd free.

*Wednesday, July 4 Julie Chen to be on “LATE SHOW with DAVID LETTERMAN”

Around this time the Big Brother host Julie Chen tours the house and we start to get a few hints about twists.

Typically the one week before Big Brother Premieres CBS releases a deluge of information regarding the show.

last year the houseguests moved in on the July 3rd which was the Sunday before the premiere.

Show starts at 9pm ends at 10pm the live feeds will come on shortly after the show ends.
If Afterdark comes back it will start at 10pm

Simon and Dawg begin live blogging the feeds until the season ends in September (we never take a day off 5 years running :) )
If you like this site consider getting the feeds through us. It costs the same as everyone else with the difference being Onlinebigbrother gets some cash. Watch The Live feeds on Superpass

I completely agree she has no personality at all, need some one like Jeff Probst from Survivor who will ask pointed questions and hold people’s feet to the firs.
I have always thought Dr. Will would be a great host and if not him let Evel Dick have it.
Chen just smiles and asks pointless questions, a cardboard cutout would have the same results.

Dr. Will would be a great host.. I don’t mind Julie Chen, you’re right though she’s a bit of an automaton. I never pay too much attention to the broadcast so it’s all good. As for Dick, CBS should bring back housecalls, have it air right after Big Brother and have Dick host it.

I use to love watching housecalls before I started blogging about Big Brother.

if they do have a veteran coming back, the viewer’s wouldn’t know until the CBS show on the 12th of July Do you have any
Superpass links and are you going to do the Glass House live feeds?

squabble, wouldn’t Alex saying that he wants to be the biggest villian in reality TV in the ” Glass House” and he
wants America to want him on the show and he wins every eviction and wins the ” Glass House”, wouldn’t
people think the show was rigged like how the producers wanted Rachel or Jordan to stay on BB13 for another show
by doing the Pandora’s Box twist and it was so obvious?

People that complain about the producers on BB and claim it was rigged to keep Rachel & Jordan on the show are simply laughable. Get a life, stop speculating and stop whining that Rachel won. I’m not a fan of her but she won and deserved it. Sometimes there are twists in reality shows. Survivor’s is the hidden immunity. Big Brother’s is Pandora’s box, get used to it. Haha

I would also prefer a host like Jeff Probst for Big Brother.Maybe Big Brother doesn’t want a host that will call the people in the Big Brother house out,on there lack of game play or there shady game play.Imagine if they had a host,that would’ve asked Adam from last season.Why is it through out the game,you seemed like you was playing this game to help Jeff&Jordan win the money?Or call Jeff out on him having a grudge against Danielle,just because she actually wanted to win the money for herself and not help Jeff win the money.I’m referring to Dani’s move to try and get Jeff evicted from the house.Or ask Dani,why in the world did she think evicting Brendan over Jeff was a good idea?Considering Dani mention before she made her decision,that Jeff&Jordan barely had spoken to her, the entire time she was in the house.Was Dani unaware that one of the things that Jeff is known for is to have a grudge against anyone who he perceive has done him wrong in the game?I think these type of questions will bring more ratings

julia is on air only on Thursday’s and i don’t think the host is going to ask those questions unless they win the HOH room and the producers probably script the questions they give Julie to ask.

@Kevins.I know when Julie Chen is on the air.Before I wrote those questions,I said imagine if the host of Big Brother were to ask those type of questions.I’m aware as it is now,Julie won’t ask the people in the game those kind of questions.The questions that I wrote,aren’t considered to be soft ball questions and that’s why I said Big Brother ratings would probably go up a little,if they got a new host or allow Julie to ask tough questions,that will call players out.So the key word in my previous post was imagine,because that’s clearly not the type of questions that Julie ask now.