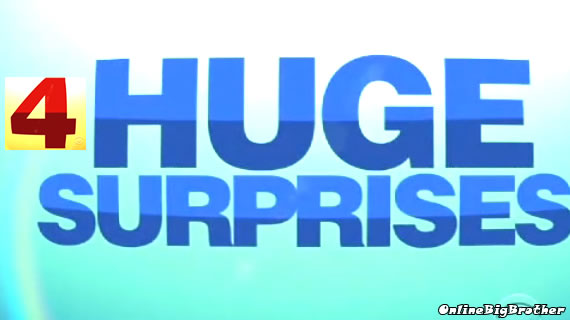 John Powell from GlobalTV.com has written today that the Big Brother 14 Houseguests and Twists will be revealed July 2. John further explains that there will be 2 BB14 Promo Videos released that will contain this information.

This is the first we’ve heard about a houseguest release date. last year we found out about the BB13 cast on June 30th so the the July 2 timeline appears correct.

Earlier this week CBS sent released 2 new Promo videos teasing that the Big Brother 14 House will have the MOST HOUSEGUESTS EVER! and 4 HUGE SURPRISES! . We are left to speculate what these surprises are and just how many players they are going to try and stuff into the Big Brother House. This season of Big Brother is going to be our biggest year yet. Onlinebigbrother will be live blogging round the clock with the MORE live feed updates, MORE screencaptures, MORE mobile support and MORE of the important spoilers. Like us on Facebook

FREE OnlineBigBrother APPS: iPhone and IOS apps.. all the sites spoilers now in an app.

Get your Feeds early save Money for BEER

AHHHHH!!! I CAN’T WAIT!! I need my big brother summer fix! This season is going to be amazing!

Can’t wait for Big Brother. I tried to watch the wanna be show. It was no good.

Looking forward to watch it! KEEP AND EYE ON THE STATS BECAUSE IT WILL CHANGE QUICKLY!

no one but you really cares

BB14 better be good yo. Last season was just a total cluster f.

Simon and Dawg keep rockin the site as always. Thanks for all the hard work your about to put in this year yo!!

The surprises could mean anything, and if the “big surprises” from the past couple of seasons are any indication, they will be lame like Pandora’s Box, the fortune teller, the vets and the saboteur. If there are more HG I am guessing it means more FF and double evictions which are always fun. I hope the four big surprises aren’t Jeff, Jordan and Brenchel. Please BB give us all newbs and make them interesting people, not airheads and eye candy. And please mix it up so the HG can’t predict what’s coming. I really get tired of how they anticipate the competitions and prepare. The best medicine for BB to stop sucking like it has for the past 2 1/2 seasons is to live by the words “expect the unexpected”, because everything has become too predictable. And stop coddling the HG so much!!

the glass house is good. MUCH better than last season of BB already.

I saw it and it sucked. All the contestants are total try hards and that Alex dude is an idiot.

Alex is quite possibly the biggest tool ever on TV.

I gave it a shot…your definitely in the minority my friend. Even critics are saying Big Brother is so much better that CBS should not be going through with lawsuits because it’ll most likely be a one and done season. But hey, to each his or her own I guess.

I Hope after dark is better than last year.I was tired of it always being off.