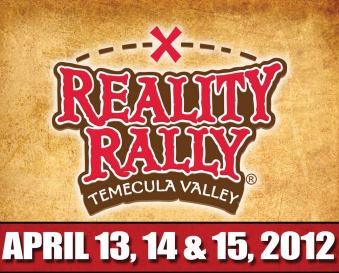 In just over 3 months Big Brother 2012 will premiere and if you are anything like me, you CANNOT wait for that day to come! To help pass the time we wanted to fill you in on a reality event called Reality Rally that is full of your favorite Big Brother and other reality stars, it’s an event that is coming up that will not only be fun to watch live, watch on SuperPass and even participate in and it supports a great cause at the same time.

REALITY RALLY 2012
Have you ever wanted to be a part of The Amazing Race or a game like it? Well considering you missed your chance to be on The Amazing Race Season 20, there is another opportunity to be a part of a similar game called Reality Rally 2012, in Temecula Valley. The event is taking place from April 13th – 15th, with the race starting on April 14th from 12-4pm.

Reality Rally was created and modeled after the CBS reality TV show The Amazing Race. It is a 4 hour competition where Reality Stars are teamed up with ordinary people like you and I, and compete through 12 gruelling challenges to win the prize & the bragging rights! MOST importantly the event is for a great cause to raise funds for Michelle’s Place Breast Cancer Resource Center in Temecula (Michelle’s Place) 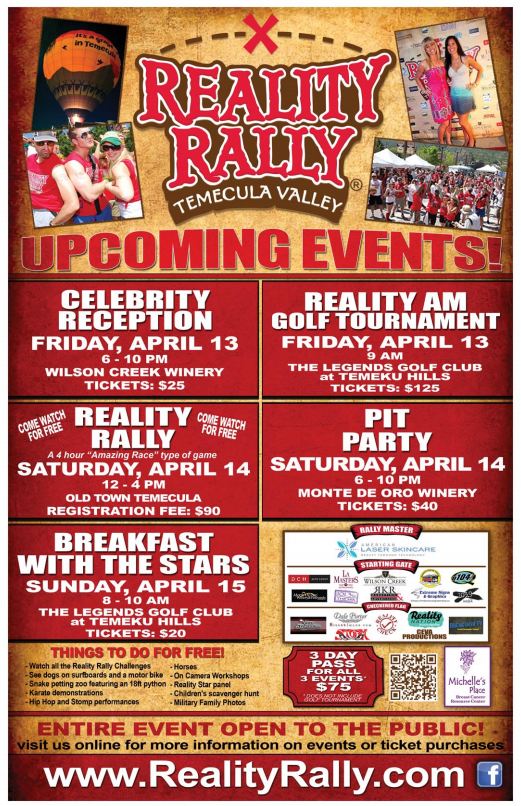 REALITY STAR LINE-UP
Teams fundraise for the cause, and for the teams that raise over $1000 they get the opportunity to choose which reality TV star they would like to be teamed up with from a list. There is a huge list of over 100 reality stars to choose as a team mate from over 32 shows such as, Big Brother, Survivor, The Apprentice, The Amazing Race, Reality Obsessed, The Bachelorette, Beauty and The Geek, Hell’s Kitchen, X-Factor, The Biggest Loser, and so much more.

If you are adventurous enough or plan on watching, some of the potential reality stars that you will see are: Rachel Reilly, Brendon Villegas, Adam Poch, Evel Dick, Michele Noonan, and so many more. For the complete reality star line up visit: Reality Rally Stars

ACTIVITIES
In addition to the race there will also be a whole weekend of full of other activities and events including: a golf tournament, celebrity reception, autograph/paw-tograph signing & photographs, a pit party, breakfast with the stars, plus 31 other free things to do that will be fun for the whole family.

LIVE STREAMING COVERAGE
Now if you’re anything like me and disappointed that you can’t make the trip down to Temecula California to participate or watch the race live, don’t be too sad. Because you are in luck, SuperPass is going to be Streaming Coverage from the Event LIVE on April 14th & 15th!

If you don’t already have your SuperPass account for the Big Brother 14 Live Feeds, now is the time to do it! Sign-up NOW to watch this event and so much more!!

I will love too be team up with janelle