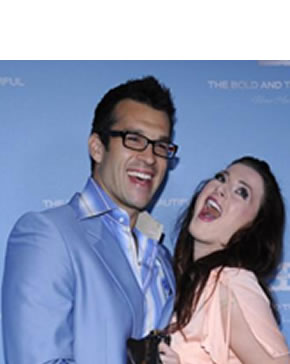 Brendon Villegas and Rachel Reilly from Big Brother 12, Big Broher 13 and The Amazing Race 20 attended “The Bold and the Beautiful” 25th Silver Anniversary Party in Los Angeles, March 10, 2012. Both Brendon and Rachel have been on the day time soap many times. Rachel was on last month for her recurring roll as a cafe waitresses. There is definitely a Rachel and Brendon overload when it comes to past Big Brother Cast members. What do all you think is this too much Brenchel?

The party was to celebrate The Bold and the Beautiful’s 25 years of “entertainment”, its worldwide acclaim (35 million viewers daily in 100 countries) winning over 40 Daytime Emmy Awards and it being the only daytime drama to simulcast in Spanish. Many past and present actors were in attendance, including: Ashley Jones, Scott Bailey, Alley Millsn, astrid Bryan, Scott Elrod, and Jacquelin MacInnes. There is a special The Bold and the Beautiful episode airing Monday, March 26, on the CBS Television Network.

Bradley Bell, Executive Producer and Head Writer said
“Twenty-five years is a tremendous milestone,”.. “It’s been an extraordinary experience. The future looks bright as we venture into the next generation of family drama mixed with laughter, tears and socially relevant stories. My gratitude to CBS for their invaluable support for the past 25 years and to our incredible fans for their dedication and loyalty.” 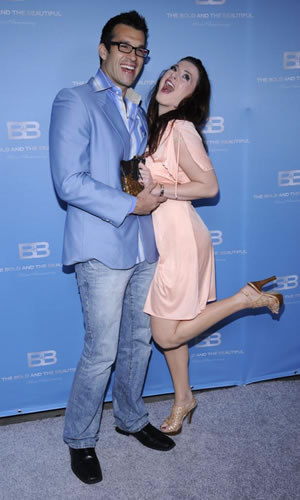 Simon, in my honest opinion yes there is too much overload and emphasis on Brenchel on this site. The last three articles all dealt with either Rachel or Brenchel.

I don’t mind it, but I personally would like to hear news about other BB cast members as well. I know this site has also placed great emphasis on JJ and Porsche, but what about the rest of the cast of BB 13? Any word on what they’re doing or have they all just disappeared from the limelight?

Most of the stuff i’m seeing is JJBR :(

Personally, I had overload of Brendon and Rachel their first season of BB but that was fine the second season was too much. Now, AR? Ugh she’s already done her “Im not good enough for you” crap and he hates the border patrol guys because he is half-Mexican. Ugh, enough of these two. I’d rather Jeff and Jordan compete every season of Big Brother for the rest of their lives than to see Brendon or Rachel on just one more show. Glad I was never a Bold and Beautiful fan.

I tried watching TAR but I can’t stand Rachel and Brendon. Enough is enough. This is the first season I have opted out of. Maybe off topic, but is anyone watching Survivor? I thought that after the last Boston Rob season CBS couldn’t possibly find a stupider bunch of survivors, but boy was I wrong. Just when I thought the women were the most hopeless tribe I ever saw, the men won immunity and went to tribal council anyways to vote off the only man with a little grey matter because their “queen” doesn’t associate with poor people. Lots of unexpected fun! At least this makes up a little for the loss of TAR.

I’ve given up on The Amazing Race 20, I’ll still watch the highlight clips and read the recaps.. never was a huge fan to begin with and seeing Rachel/Brendon doing the same performance they did the last 2 seasons of BB is ridiculous.

I posted the Colton Crumbie apology on G+

What do you all feel about this guy?

Is it really Colton’s apology or is it just satire? Are you serious or just ridiculing him?

Oh thanks Simon. In that case, I’ll say I believe he was joking in Tribal Council but not when he referred to Bill as “Ghetto Trash.” His voice was harsh and angry and his eyes looked furious. So I think he does have some racist beliefs within him.

Bill however disagrees and claims that Colton is not a racist in an interview with reality tv world.
http://www.realitytvworld.com/news/bill-posley-survivor-one-world-colton-cumbie-is-not-racist-13239.php

I agree it wasn’t racist. It was classist. His hatred of Bill wasn’t because Bill is black, but because he is “poor”. It was the ravings of an entitled spoilt brat who doesn’t know any better, but I don’t think this will change the crowd he hangs with. It’s the way he was brought up.

Yeah that’s true. I think Colton feels this way because he has never felt backlash (according to him at least) in being a minority group (LGBT Americans) or in being poor. That’s why he has not empathy for other minorities or the poor. He is lucky he is rich and hence, can live in a bubble sheltered from reality and how people around him live.

Just because he is in a reality show doesn’t mean that he will experience reality.

I think his embarrassment is superficial and motivated by the backlash he must be feeling, not out of any true self searching and regret. He didn’t actually apologize to anyone specifically as far as I know. What intrigues me about this season is that all of the men think Colton is god. They fear him for some reason I can’t understand, to the extent that they went to tribal council when they didn’t have to. They had the numbers advantage, but now they are even with the girls. Nobody even thought to flush out the idol. I have spent half of the episodes so far with my jaw on the ground. The last episode is full of the stupidest moves in the history of reality tv, but tribal council took the prize.

You guys are too hard on Brenchel. Brendon is traveling around the world to find the cure for cancer. I suspect that this cure lies in Italian sausage, and that’s why BR were continuously tasting different sausages over and over again.

Don’t really care what they do as long as they don’t ruin another season of BB.
Maybe they should try Japanese TV.