Big Brother Winner Rachel Reilly and Brendon Villegas attend OK! Magazine Pre-Oscar Party – Arrivals at Greystone Manor Supperclub on February 23, 2012 in West Hollywood, California. These two seem to everywhere since being on BB12, Winning BB13 and now being on The Amazing Race. Something is telling me that they either a) milking their fame as long as they can or b) they won TAR 20 and are now reality TV royalty… Now I’m starting to fully expect them on BB14 and every other CBS reality show from here on in.. What do you all think, would Brenchel have a chance on Survivor? 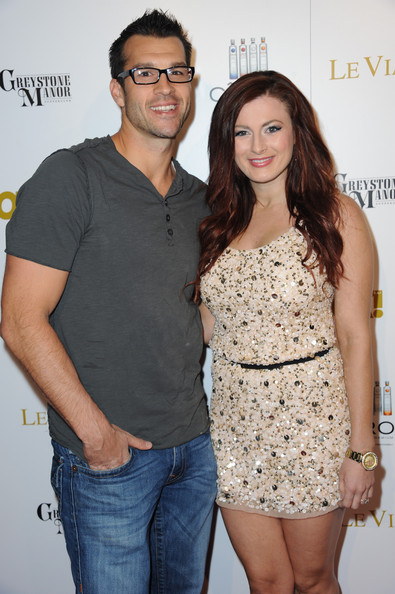 Brenchel at the oscars. they probably met other celebrities.

Rachel & Brendon probably meet other Oscar winners Celebrities including Brad Pitt and Angelina Jolie! They probably have Pre-Oscar Party together! Also, Brenchel would dining with other famous celebrities like George Clooney and his girlfriend Stacey Kiebler, Woody Allen, Kevin Costner, Jonah Hill and so many more. They are so lucky that Rachel & Brendon would talk to them and have dinner together. In fact, they would love to see them back for motion pictures with starring role!

It would be awesome that George Clooney & Stacey Kiebler would have a after-party with Brendon & Rachel. That would be awesome! Oh! Brendon & Rachel would Kick Ass at Survivor as well. Put Jeff & Jordan in it. That way. Team JJBR would rule survivor in the final 4! Brendon would take out Jordan or Jeff take out Rachel! Or Bromance of Jeff & Brendon forming an alliance!

Jeff Probst would probably have Brendon & Rachel on the Show Survivor! They already have Big Brother & The Amazing race. Why Survivor? They should be on the show! With Jeff & Jordan!

Good theory. I wouldn’t doubt they won TAR. I just hope they stay out of bb14. We need some fresh faces!

Hey Joe, we need one season of 100% newbies then hit us with BB15 allstars after which I’ll retire :)

Wow! I hope Simon’s theory is correct! Imagine after Rachel winning the 1/2 million on BB, if Brenchel went on to win ANOTHER MILLION on The Amazing Race. That would be unbelievable. Now I HAVE to make sure I don’t miss watching TAR on Sunday Nights. If Simon’s theory turns out to be right, it proves what I’ve been telling all of you about that couple for months now, that they are a VERY POWERFUL TEAM (and I picked up on that, from just spending ONE evening with them)

i just hope they win amazing race they are unstoppable

These two clowns have really made it now. A pre oscar party held on a Thusday night with hugh guest from real housewives and jersey shore. Not even a d-list invite list.

Far too many trees available on any island for boy george to hide behind and cry, we would never see her!!

Name
Reply to  Not a PHD student

I attended a pre-oscar party in my basement

Hilarious episode of The Amazing Race this first week of March. Brendon & Rachel did incredibly well. Rachel kept a bottle balanced on her head while Brendon cheered her on. They came in second position team this week. WOW! They’re really tearing up on TAR. The other couples FEAR them for their ambitious drive and determination. Just like in BB, every time Rachel is about to break down with an emotional outburst, Brendon pulls her back in to be focused and strong. He is a HUGE asset to keep her in control and WINNING! Together they are a POWERFUL combination. The comps on TAR are way more fair to all the contestants than the comps on BB. The contestants do it on their own time frame, with no one able to throw comps or cheat each other like on BB. VERY FAIR TO ALL! This week the twin brothers were eliminated.

I’m sorry…I feel like I’m the only one who still doesn’t like these two (Brendon and Rachel). I never have from BB12 or the recent BB13. I really hope they don’t come back this season, I couldn’t handle it!!!! By the way, I’m a long time lurker and occasional poster on this message board but sometimes I just need to post and can’t help myself.

I’m hoping for a great season BB14 and will be applying myself. It’s time for all new people….what do you guys think new twists could be this year? It’s gotta be hard for them to keep making this show new each year. Also, what about the new house design for this season? What is everyone feeling??

Also, I’m a long time TPB lover. “Is that the liquor talking, Mr. Lahey? …I am the liquor.” Favorite quote of all time!

For me Brenchel is much more likeable when they are not on the live feeds.

I agree with you about new people, I really hope they have a 100% new cast this time around. At this point if they don’t have a major twist this year that in itself will be a twist.. I do hope they retire the Pandora’s box and any twist that requires a vote in from fans.

I liked last year’s house with the Fortune teller hopefully they do something cool like that again.

HAHAHAH loving that quote one of the best.. “propane.. propane”

Don’t apologize I can’t stand them either. BB12 was bad BB13 was a nightmare.

I agree more, You said that BB12 is bad and BB13 is much better because rachel won. Thank You!

I love The Amazing Race and I hope Brenden and Rachel win!! It would be nice if they could go on Survivor, but they would be voted out immediately in Tribal Council for no reason at all.

I agree more! You said that:
•Not a PHD student says:
7March 2, 2012 at 7:10 pm
These two clowns have really made it now. A pre oscar party held on a Thusday night with hugh guest from real housewives and jersey shore. Not even a d-list invite list.

Far too many trees available on any island for Daniele to hide behind and cry, we would never see her!!

I agree more! Daniele crying like a wuss! Grow up!

captain.. our new repetition filter is going to keep flagging your comments and IP as spam if you continue to write comments like this.

Sorry Simon. I just want to be more supportive.

Thanks Captain, I appreciate the effort

Thank you this site would be better off

I SO AGREE WITH U . I THINK THEY WILL DO GREAT IN SURVIVOR HOPE . RACHEL AND BRENDON WOULD DO GREAT BUT IF THEY DO DECIDE TO GO ON SURVIVOR THEY WOULD NEED TO BE ON DIFFERENT TEAMS THATS THE ONLY WAY PEOPLE WONT SEE THEM BOTH AS A THREAT .BUT MOST PEOPLE WOULD TRY TO TAKE THEM OUT QUICK BECAUSE THEY ARE GREAT AT CHALLENGES.

I didn’t do anything. I’m very awesome! I will be here 4ever.

PLEASE make her go away. I wouldn’t mind Brendon being on BB again, but Rachel? Give me a break.