CBS has released a photo of JoJo Spatafora and Willie Hantz in the Big Brother House along with the following caption: 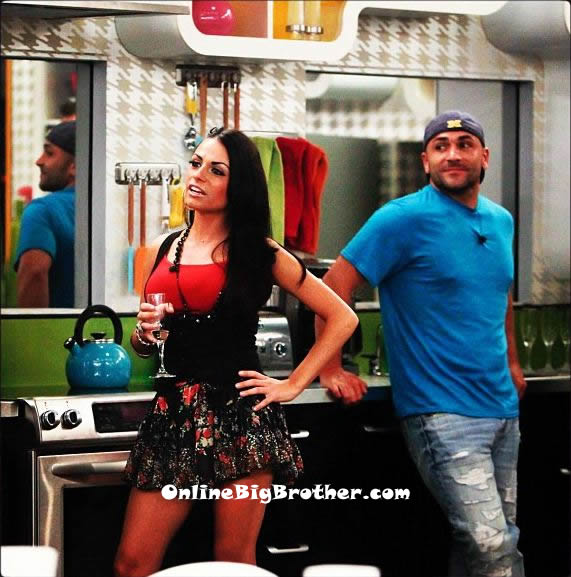 With the MOST anticipated summer reality television series just 1 day away, we are so excited for the big brother live feeds to be finally turned on! More and more information has been coming out about big brother 14 which only fuels our hunger for the show. This season we have 12 all new house guests, in addition to 4 returning big brother alumni. Last night the 4 identities of the mentors was leaked, spoiling CBS’s plan to unveil them during the première episode.

DON’T FORGET that the Early Bird offer will come to an end TONIGHT, July 11th at 10PM.

If you don’t already have the Big Brother Live Feeds, NOW is the time to SIGN-UP!

Every season before the première SuperPass offers the Early Bird Special where you can save $10 off the regular 3 month subscription price. That allows you to watch the ENTIRE season of Big Brother 14for only $29.99! Plus you get $30 in music credits, exclusive interviews, and much much more ..so its win win!

We are dying for Big Brother 14 to start! All these photos and tours are just teasing us! COME ON BB TURN THE LIVE FEEDS ON ALREADY!

JoJo, besides Janelle and Britney I’m rooting for to win.

Me to.. I’m expecting some entertaining feeds from her.

Love JoJo… Sick of the Hantz “dynasty”. Really CBS? Come on. I’m just hoping the rumors aren’t true that Willie is the first HoH. Definitely happy with the mentor leaks… Although if it was my choice Dani (BB8

Simon
Reply to  The other Simon

hey simon, thanks for all the spoilers and fun updates last year! it got me pumped every week. i was wondering if you know if the episode will be featured online after the premiere tonight. unfortunately i work this evening so i was hoping to catch it online. if not i’ll catch it tomorrow i’m sure. thanks!

Hey Jaime, Apparently CBS is going to release the episodes on their website. I’m not sure if they will be GEO Blocked or not so if you are not in the US you’ll need to check out youtube.

I may be recording the videos this year as well.. either way I’ll slap a link to where they are in the comments tonight.

I’m so ready for BB tonight. Got the feeds yesterday before the sale ended. Now just waiting for the games to begin!

Team JoJo, Willie , Ian, and Danielle (If she does what she says she will)

I am glad you’re looking forward to the feeds after not liking the feeds last year. Do you know how the mentors were chosen,
like would two be eliminated each day by voting from fans each day until they got the Final Four? Do you think the mentors would be allowed to leave the house with the evicted houseguest to talk to Julie? Is there going to be a 17th houseguest?

in the picture, doesn’t she look like she’s getting into a fight with someone?

So ready for BB14, the glass house is just a complete failure and not feeling my void at all!

Team Willie All the Way….LOL @ his interview “who is that guy….that you speak of”….I LOVE THE HANTZ FAMILY (except for Brandon…what an idiot)….GO HANTZZZ….TEAM HANTZ ALL THE WAY!!!! Let the Hating begin…..

i`m with you .. got a kick out of russel.. willie loved his inteview … hate brit but gonna cheer on her team… go Brit and Tanker (willie)

heard someone will be evicted tonite

I’d like to say to Simon and Dawg before the madness begins that I appreciate the effort and time they put into this site. It is the best one out there! Looking forward to seeing the regulars and can’t wait for the show to begin. I’ve been off work for over a year, but the doctor cleared me to go back to work now and hopefully I will be able to send a donation before the summer is out. Please everyone, send what you can. The site doesn’t pay for itself and they deserve it.

Thanks chloe, I appreciate it.

Dawg and I work around the clock all season on this site. I’m glad enough of you enjoy our site to keep it going.

I haven’t been more excited for a cast than this season can;t WAIT for tonight when the feeds start up!

Hey everyone…..Keep the eye on your past favorites and also the stats for the newbies of bb14. Stay tuned!

GO Willie hope u get it all baby xxxxx