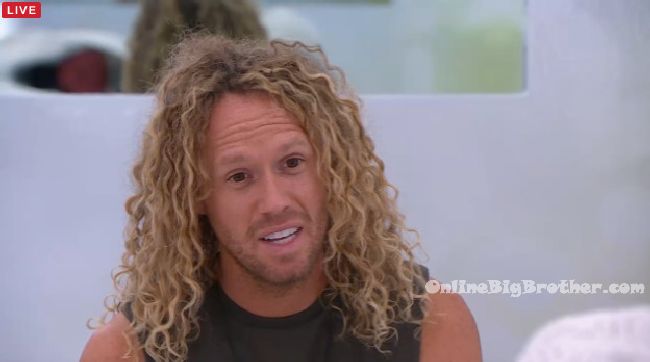 2pm In the bedroom – Tim is talking to Loveita. Tim tells her that if she wasn’t HOH the first week you wouldn’t be here this week (on the block). Tim says that if you convince Jared you’re the one to keep, then Raul and Kelsey will vote to keep you. They’ll do whatever he says. Loveita says he isn’t telling anyone how to vote. Tim says until you address what started that whole chain of events you will always be judged for it. It’s got to genuine. Jared can read bullsh*t a mile away. Don’t bullsh*t him. Open up your hear, you’ve got to be vulnerable. Tim says and he (Jared) might be voting if it comes down to a tie. You need to think about what made you come into this game. Stop trying to save your life. Loveita


2:10pm Dallas, Cassandra and Christine are talking. Cassandra says she is voting out Sharry. Dallas says me too. Cassandra says she thinks Sharry is more able to trick people. The feeds switch to Ramsey and Maddy. Ramsey says I think we’re going to make it far in this game. Ramsey says we have a good chance. If me, you, Dallas, Tim, Nikki, Sharry or Loveita. That’s 6 against 5. We have a 56% chance at winning HOH. If the brothers win they won’t flip the house but we know where they’re going I think they might put up Dallas. I would try to convince them not to. Ramsey says People think I hate Dallas and that he hates me. If they (brothers) win HOH I want Dallas to go to them and say he wants my blood on his hands. (So that the brothers don’t go after Ramsey.) Ramsey says I need to build my relationship with Christine. I don’t know where her head is at. Maddy says no one does. 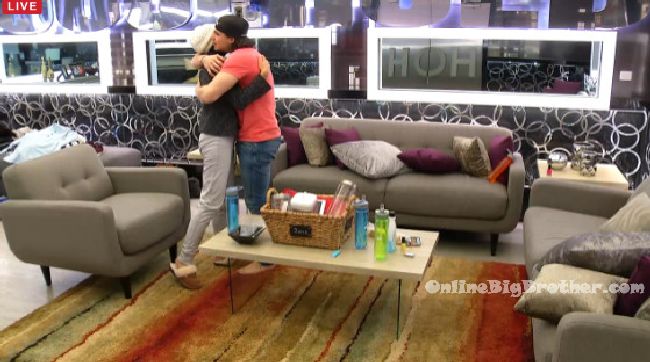 2:20pm HOH room – Loveita goes up to the HOH room to campaign to Jared. Loveita is taking Tims advice to be genuine and address what got her into this position. Jared says that the house has been back and forth. Don’t give up and don’t beat yourself up for previous actions. Loveita says I don’t want to leave with you having a bad vision of me. Jared says he doesn’t. Loveita is getting emotional. I really wanted to spend time with Kelsey because we really did hit it off. Jared says if you are Sharry are here next week, its not like I dislike either one of you. Next week we all get new cards. Just relax and have fun. Loveita tells Jared it wasn’t only her that had the idea to target Kelsey. Jared says knows it was a group consensus. Loveita says its just that the line is drawn. Jared says it doesn’t have to be, its just sand. It’s not for me Loveita says its not for me either. Jared says good. Just because we have broken trust doesn’t mean we cant build trust. 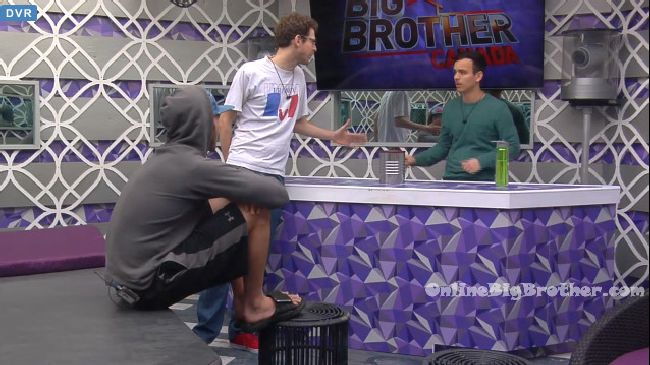 Phil asks Joel and Mitch what they want to do? Joel says I want Loveita to stay. Mitch says he does too. They’re right to be nervous because Loveita could team up with Maddy and come after them (Jared & Kelsey). Phil says its not even a discussion for me. For me to make it longer in the game its better for Loveita to stay. Joel says we need 7 to get the majority (since Tim & Nikki are cancelling their votes out). Phil says that Dallas sketches him out. I trust Loveita more at this point. Mitch says whatever we do we need to be honest with them (Jared & Kelsey). Phil asks what makes them (Kelsey, Jared, Raul) more powerful than us, there’s 4 of us!

3:10pm HOH room – Phil asks Cassandra who she wants to go. Cassandra says I’ve already said it a million times. I want Sharry to go. Phil says me too. Kelsey says I’m back and forth. 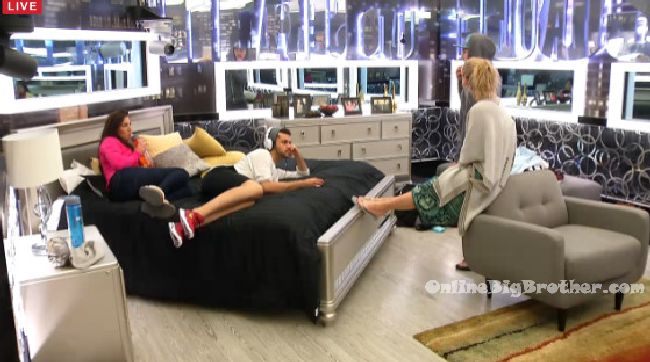 3:20pm Jared comes out of the diary room with the HOH camera and they all start taking photos. 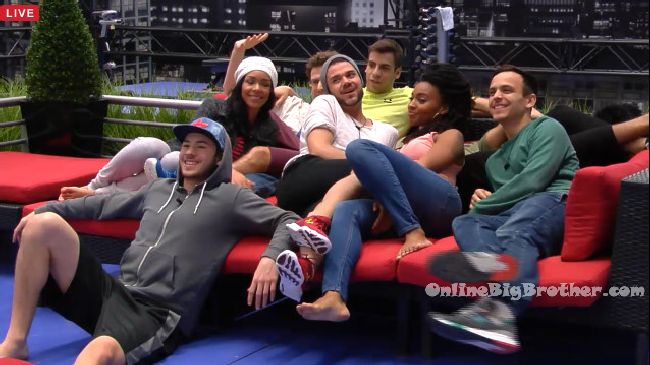 4pm – 4:25pmThe house guests are waiting around for Nick to get out of the diary room so they can take a group photo. 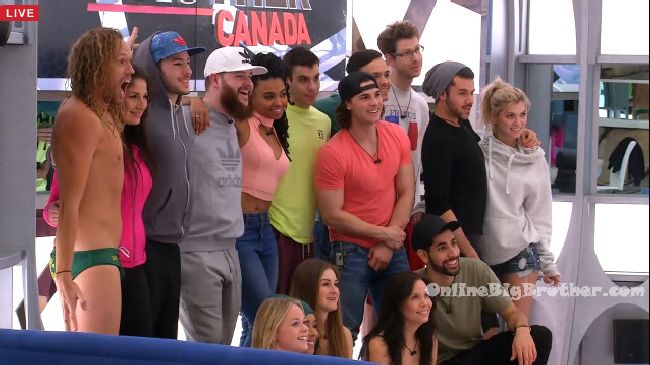 some found something in the pantry room!

something was foubd in the panttry

Why did Tim and Nikki cancel their votes?! How can they do that?

they each vote for a nominee, therefore their votes cancel themselves out. They want to do it because they weren’t here for the first week and don’t want to have to make a choice or affect the game having not seen the reasons for the nominations.

Thanks for the hard work, donation incoming

Thank you! We really appreciate it!

Yes, she is but it’s justified.

Kelsey is sooo bitter towards Loveita…

Thank you Simon and Dawg! You’re the best. No one updates as well as you. <3

Thank you! That’s nice of you to say.

Phil Mitch and Joel are all like, we want Loveita to stay… Kelsey is wondering why. DUH cause she’s going to target you and Jared. It’s awkward that they don’t see that. Why did they keep you last week Kelsey? Cause you are targeting Loveita. I don’t think anyone likes Kelsey more than Loveita and that’s why she’s there, they just wanna keep themselves safe.

I don’t think it’s a matter of the HG liking or disliking Loveita or Kelsey more. It’s beneficial for the two of them to remain in the house to target each other. No what could throw a wrench in Mitch, Joel, and Phil’s plans is if Kelsey and Loveita aligned down the road. It’s not like that is impossible. Jun and Alison in BB4 disliked each other initially, but then realized they could help each other float to the end.

Besides Christine, Maddy, and Nikki, I don’t think anyone in this cast hates anyone. The difference between Loveita and Kelsey is that Kelsey has been more outgoing and Loveita has been more reserved. Even if it’s not in your nature to be outgoing you should try to be in the BB house. Reserve people rub HG the wrong may more often than not. Someone ( I think Mitch) mentioned earlier that it was nice to see Loveita having fun.

Sorry, but I don’t see Kelsey and Love working in the near future, unless Kelsey becomes an outsider. I

OMG i just loooove Tim! Loved him in BB Australia, but i adore the way he talks and get to know people in this environment. So stoked, that he is in BBCan.

Did Christine not pack any other clothes? All I ever see her wearing is the leopard print slip. Please for the love of God… CHANGE!

So, it’s near the end of week two before somebody says, ‘why are we letting three people tell us what to do? There’s more of us than there are of them.’
Paige was right. Math is hard.

Tim gave Loveita great advice. Her problem is how she approached Kelsey after week 1. She was in full on game mode, and had 0 empathy. People can read that. Regardless of whether or not Kelsey is truly still bitter or not (more than likely she just wants to get someone out that she knows will target her again), Loveita missed her chance to salvage any sort of relationship with Kelsey.

When you are viewed as a tier 1 threat in the game you should be aligning with other tier 1 threats. Instead Jared, Loveita, and Kelsey are falling right into Mitch, Phil, and Joel’s trap. Even if Loveita stays than she, Jared, Kelsey, Dallas, etc. will all play themselves out of the house and then the Floaters will take control and then batter it out to the end. It’s all very Machiavellian this season if you are reading between the lines and really honing in on the subtle strategy and game play.

Hann, that was beautifully said! They are ALL going to outplay themselves and let Mitch, Phil and Joel (and a few others) sit back and eat popcorn.

I love that Tim is on this season since his season of BBAUS was one of only two seasons I have watched! So far it seems like Joel is playing both sides, Mitch is as well floating around, Christine likes to talk mad shit, same for Cassandra (but I find myself kind of liking her), Sharry is boring, Ramsey’s plan to make himself a target next week is idiotic, Dallas is sketchy and untrustworthy, Maddy I haven’t figured out yet, Nikki is awesome to watch, Tim is genuine, who’s Raul?, Kelsey is actually a little smart but very bitter, Jared is a dummy, … have I missed anyone? I guess anyone else would be forgettable!