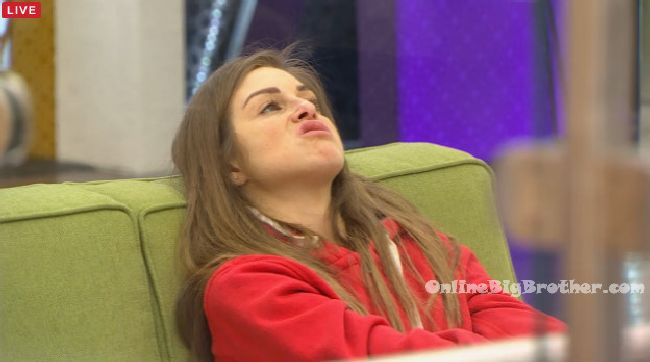 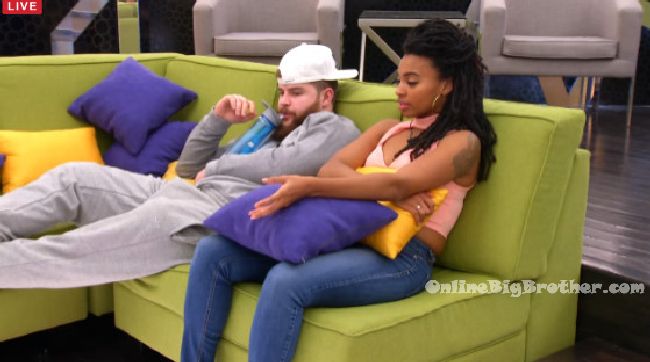 4:45pm Sharry is campaigning to Dallas. She says that she doesn’t even understand why she’s in this position. I should have just stay far away from Loveita. Worked with her but stayed away. Sharry says you have to be careful of who you’re straight up with because they’ll probably use it against you. Dallas agrees. Dallas says I am being f**king vocally honest about who I want out of this game. You know what I mean. Sharry says yeah. Maddy joins them. 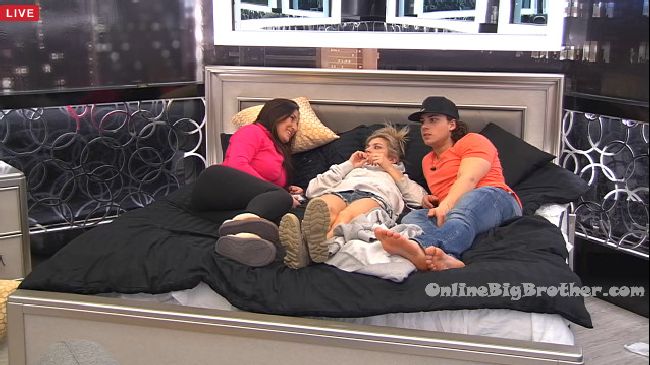 4:55pm HOH room – Cassandra, Kelsey and Jared are talking. Kelsey says I don’t want to have anything to do with Loveita, I want her to get the f**k out of here!! Jared says we just need to keep Dallas close to us. Cassandra says that Dallas hates me. If you put Dallas on the block, he better go because he will come back with vengeance. Kelsey and Jared agree. Mitch and Raul join them. Cassandra says I’m voting Sharry out. Mitch says Sharry. Kelsey says okay you’re right we need to get Sharry out. MItch thinks the brothers are pretty steady. They think at some point the brothers are going to be two people. Cassandra says we need to get them out before then. Cassandra tells Jared that he is a nice guy that always gives people the benefit of the doubt but he is bullsh*tting you.

5:10pm Nikki tells Loveita and Sharry that if she won HOH she would 100% put up him (Dallas) and Raul. I f**king hate him. It would be him (Dallas) or Maddy. Nikki says that disgusting hyena! (Raul) I’ve never come across something quite like it. Nikki says that Jared is lovely but it’s a shame he has trolls surrounding him!
Want to watch the Big Brother Canada 4 live feeds but live outside of Canada?
Bypass the geoblocking with HideMyAss VPN and be Canadian Anywhere: VPN Help Guide 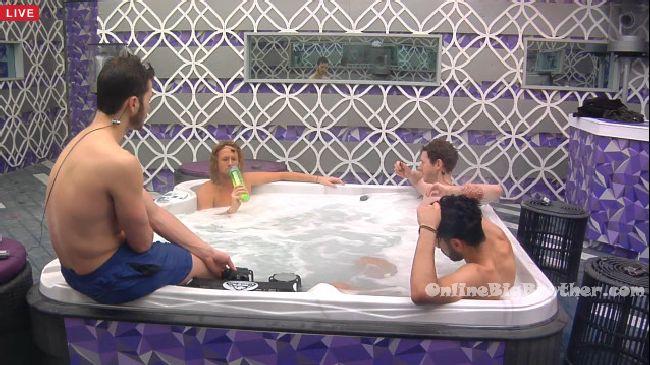 5:20pm Hot Tub talk – Tim tells Phil, Ramsey, and Joel that he is just being himself and that if he is up on the block next week he will be exactly the same. Tim says that he had a great conversation with Loveita this morning and that he really likes her. He says that Sharry hasn’t come to talk to him. He asks is it up to the person or the nominee to start the conversation. They tell Tim that its up to the nominee.


5:35pm – 5:45pm In the kitchen – Nikki, Tim and Phil talk about a strategy to get others to throw the HOH competition if Nikki told them if she won she would put up Raul, Dallas or Maddy. Phil says during the competition you tell everyone that you’re putting up those people if you win. Then everyone drops out and you do what you want. That would be legendary! Tim says they won’t believe it. Nikki says I’m not going home until I have really rocked the boat. Tim says yes, that’s what we are here for as wildcards. Phil asks who Nikki would put up? Nikki says the hyena or Dallas. I don’t trust Dallas for 1 second. I want to cause as much trouble before I go. Right now I am just ruffling peoples feathers, I want to F**K their game up!

In the bathroom – Dallas threatens to throw the tongue at Phil in the shower. Dallas runs to get it and Phil chases after him before putting on his towel. (Here are a couple gifs of it Camera 1 and Camera 2) Phil ended up finding the tongue and taking it out to the hot tub room and putting it by production’s entrance. 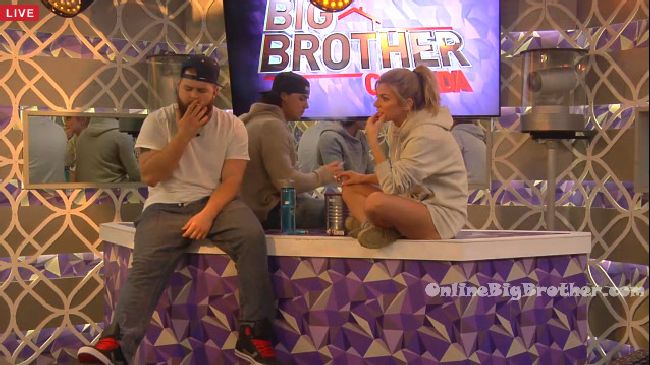 I have to say. I am really impressed with Phil. I really thought he was just going to be your typical bro, but he is actually quite charming and plays a mean social game. He’s great at talking people into doing things that will extend his lifespan in the game while simultaneously blowing the other person’s game up. To be fair though it’s not like Nikki was going to be the one calling the shots all season. She’s strictly entertainment.

I’ll get behind Nikki winning HOH if it means Dallas or Maddy gets evicted for week 3. It’s kind of pointless at this point to get someone like Raul out.

Kelsey is a c**t who thinks as long as Jared spends as much time with her as she demands, she controls things….and it’s true. I can’t wait until they take this bitch down – here are the like exits, like, on the like left, …..she’s evil.

What is wrong with people? If you don’t like how Kelsey is playing the game that’s fine, but calling Kelsey a c**t…, really? Ummm your misogyny is showing. You don’t have to like her, but she’s not the all terrible person people are making her out to be. I don’t like Dallas, and I’m not using age regressed name calling to attack him when he can’t even defend himself. There are actual people in the world who do terrible things. I swear some of the crazies always come to post hate filled rhetoric.

You are the epitome of a coward, anonymously posting hate speech on the internet about someone that you don’t even know.

Agreed, it’s just a fricken game show, none of this will be a big deal once it’s all over.

I don’t like Kelsey at all! Tim all the way

OMG Nikki is so Funny! love her, I agree with her targets, Dallas, Raul, and Maddy! I think the brothers, Nikki, tim, Mitch and Joel should make an alliance! the Girls this season are so Bland its like watching paint dry! a guy is defo going to win this season! that being said Cassandra is a dark horse! X

i wish dallas would stop taking his shirt off.his pasty skin is not fun to look at.but its mainly about his gross, ugly tattoos. no one wants to see those

right now in this game i think mitch, cassandra and joel are positioned best. no one wants to target them and everyone likes them.

BB , as its been said really screwed the brothers over. the only reason people are even mentioning them as targets is because they know they are brothers and are afraid they will eventually be 2 players. now, i have to give the houseguests credit for realizing that and targeting a confirmed strong pair.instead of letting them slide like everyone did lastyear for the sisters. however, as i said if BB had never told the other guests then they more than likely wouldnt be on anyone’s radar.

The problem with BB not telling the HGs that they are brothers, is that they would then have to play as two individuals to keep the pretense up. Two chances for HOH, two votes, etc. That may been seen as unfair to the other HGs that came in as individuals (no relatives, friends,etc). As it is now, they only have one vote and only one can complete. If the HGs think they may split into two players later as a twist adds to the suspense/paranoia.

I know fantasy scenarios are not really popular… but i’ve had a thought of a way in which i’d try to play off week three coming up if I were hoh in the event that it is one of the non-clique. Nominate Tim and one of the clique. Play up the idea you are sticking with the last plan you heard which was getting rid of one of the out of towners, and rubbing the clique’s ego by saying they are so well liked nobody will ever evict one of them. It’s a sure thing. If Tim wins veto.. another cliquester. If the cliquester wins veto, another cliquester.
No matter what happens when the vote is done you can play dumb. You thought it was fool proof and you were doing what the house said they wanted last you were given marching orders.

I like the plan, but I don’t want Tim to be anywhere near the block. To many what if’s in this situation and Tim may go home. Long live Tim!

To be honest, from a house guest’s perspective, bringing Tim in on the plan beforehand is key. If the guy that’s been saying he isn’t there to win doesn’t want to help shake up the status quo… you know he’s playing you.
Then truly, anyone that goes home is better for your game.
From a Tim fan’s perspective ya it’s terrible.
From a game perspective it’s not.

I think that Maddy is extremely underestimated in this game..she’s very athletic and should win HOH and put up Kelsey and Raul. Those two need to go!

I don’t think she is underestimated. I think that she is exactly who she comes across as: boring, immature and catty. She may win a comp or two but there’s nothing special there. However I do agree that Raul and Kelsey need to go!

If I have to pick a player to win the game I would put my money on Mitch.