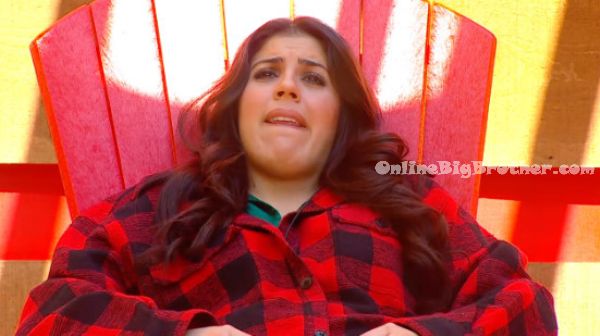 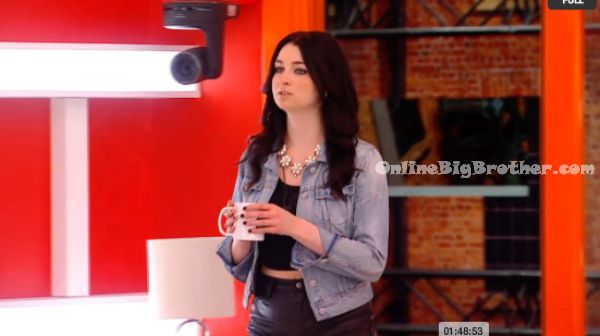 10am – 11:20am Big Brother blocks the live feeds for the nomination ceremony where Jon as Head of Household is tasked with nominating two house guests for eviction.

11:20am – 11:35am When the live feeds return – we learn that Jon did exactly what we expected and nominated Sabrina and Rachelle. Sabrina and Rachelle head out to the hot tub room to talk about the nominations. Rachelle says when he said my name I just laughed. The way he said that was just stupid, especially if he wanted to bring one of us over. Sabrina say I want him to go next week. He isn’t welcome to Montreal any more. After the POV I am going to tell him he can send me home, you can keep Rachelle. I don’t care. Rachelle says I am not asking how people are voting. They can go f**k themselves. Sabrina says and there could be a twist that totally screws them over. Sabrina says even if we had won HOH we would be out the next week. And the deal we gave him was amazing! Rachelle calls Allison a loser. Sorry big brother! But how did she come into the game two weeks late .. she’s done nothing! Sabrina heads inside and tells Allison, Arlie and Jon – Depending on what happens with the POV .. send me home! I know I don’t decide but just keep Rachelle. JOn says okay! Sabrina asks what you’re going to do that…

11:40am – 12:15pm Jon heads out to the hot tub room – He tells Adel, Heather, Neda how Sabrina just told him to send her home. He tells them how he replied okay and she was like what you’re going to do that? Neda laughs and asks she actually said that! Arlie joins them. Jon asks them since I am not voting can one of you guys say happy birthday to Janelle when you’re evicting. They all agree to say it. Neda says that Sabrina asking to be evicted is just some reverse psychology sh*t. Arlie says its just her trying to make up for being so mean to Rachelle in the beginning. Rachelle joins them. Jon jokes that Neda’s a virg!n. Adel says if Neda is a v!rg!n, then I’m a v!rg!n. Rachelle says I’ve only slept with one person. Everyone is shocked. She says its not like I haven’t done other things though. Jon comments how all the s*x talk is turning him on. He says Janelle isn’t going to know what hit her when I get home! Jon comes out with pillows and takes he boxers off and lays out n@ked to suntan. Neda says good god Arlie! Not long after Jon gets up to go inside and dumps water down Arlie’s b*tt cr@ck.

12:20pm Jon joins Arlie outside the havenot room. Arlie says the more I think of this I am not sure how good of an idea it is but .. we wouldn’t do it yet but in a week or two.. we could tell Allison that she has always been the target of the 6 and that she was to go out first. We would tell her that if she comes over to our side she would be in the top four instead of go out 6th. We tell her that if she then wins the next HOH she would be in the final 3. Arlie says there is no way we will ever be able to trust Sabrina or Rachelle. Its more likely that we can trust Allison and that she would want to go to end with stronger players. JOn and Arlie agree to think about it.. 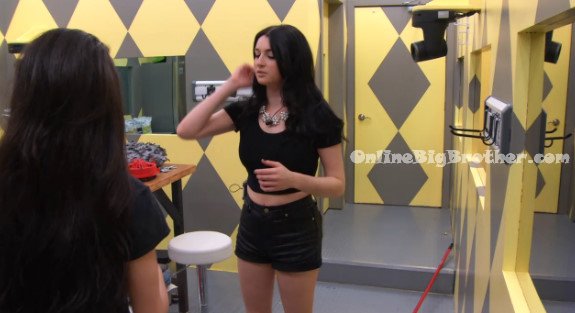 Not A PHD Student

Keep Sabrina around just to tick her off for another week.

Wow who knew she had the power to keep people out of an entire city
.
The whole “I’m offically not speaking to any of them” lasted a whole 2 minutes, way to stick to your guns.

Does anyone else think Rochelle looks like she could be related to Rachelle??

Cooper
Reply to  Not A PHD Student

Yes! She reminds me of Rachel(*) and the way she casts her vote to evict is the same.

Toes
Reply to  Not A PHD Student

No! I can’t stand watching her anymore! It’s all bullshit and tears with that one

Tigg
Reply to  Not A PHD Student

I have to say it, it’s a pretty shallow comment, but I have to get it off my chest; I HATE Rachelle’s leather shorts that she wears all the time.

The fact that she peed in the pool is totally disgusting!! What a pig! I noticed too she doesn’t wash her hands after using the bathroom…yeech

Why is sabrina giving up like this instead of trying to backdoor arlie?

Who made Sabrina the gate keeper of Montreal??? I am also from Montreal and Jon is welcome any time lol.

she’s actually from my hometown Laval… ugh.. if I see on the streets, I’ll MOOOO her

Im from Montreal too! Yes Jon would love it, Im sure! And would be welcome with open arms. Im looking forward to seeing Kenny downtown this summer!

Arlie is a snake in the grass. The faster the other five cut off his head the better it will be for them. Especially with this nonsense of keeping Allison. She gotta go too.

I hope Rachelle stays. I want to know what she will do without Sabs for a week. I get the feeling she’s finally seeing how detrimental that witch is to her game.

Rach, looking in mirror – “So weird ! There’s a girl in here who looks just like me ! I’m so annoyed ! Fuck her ! Whatever.”

If one of the gremlins win the veto and Allison is not the replacement then Allison can use her veto and 2 of the sloppy seconds would be on the block. I wonder if Allison uses her veto on someone else is she safe or can she go up? If it`s like a regular veto then she can not be nominated. Wouldn’t be surprised if the DR put that thought in her head. Although she would become target #1.

We cannot micromanage the comments, there is TOO much on our plates producing content for us to read each comment and determine if it’s not going to upset some of you. AT BEST we skim the comments for phrases to pick out keywords.

When Dawg is working on the site I am working a regular day job and vice versa we basically work round the clock to record videos, capture images write quick summaries, reply to emails, tweets etc etc etc. I need to sleep and so does dawg.. we both have families!! Sometimes nasty comments are going to slip by and when that happens send me a email to let me know and i will look into it. I’ve banned people many times already this year.

We do our best to make everyone happy, really we do. I don’t want sh1t posted on the site anymore than the rest of you.

If you all want greater moderation we can do that it would mean having to wait 30-60 minutes for comment turnaround. Reply if this is somthing you all want..

I vote for keeping it the same.

Thumbs this comment up if you want more moderation thumbs down if you want it to stay how it is.

There certainly are a lot of immature and unnecessary name calling and derogatory statements made here in the commentary. I like to read the comments that are about gameplay, speculation about who is going to do what, or people’s opinions about what certain players should do- I like seeing how different people see the game from different perspectives, depending on who their favs are. I don’t need to see the personal insults heaped on people- these house guests have families,friends, jobs and lives – they aren’t out murdering people, they are playing a game, and don’t deserve so much negativity. That being said, many making the nasty comments are probably trolls with nothing better to do, so I skim their comments, and then ignore them. You guys don’t have the time or resources to police the idiots…. Most of us are here to see respectful gameplay, not cause drama, and we’re wise enough not to feed the trolls. You guys do an awesome job, thank you for all you guys do- especially the time you take away from your families to do this.

This is Simon and Dawg’s site, and it is what it is (the best BB site). The two of them work very hard to keep us informed and entertained. Instead of making them work harder by whining and complaining, maybe we should all just behave a little better, grow a thicker skin and hit the donate button in gratitude. Geez! Simon and Dawg don’t have to keep the site running, if you think the site isn’t moderated or politically correct enough, then maybe it isn’t the site for you, lots of us like it the way it is. I’m sure Simon and Dawg have more important things to do than moderate comments.

Wat sabrina meant is that she’s not inviting jon to her house in montreal anymore….why anyone wants ppl to come to their house is wackkk anyway its a show its a game wateverrr….I love sabrinas Laugh it shows that she is jollly w a happy spirit despite her big mouth & inability to stick to any plans…I CANT STAND NEDA LITTLE PSYCH NUEROTIC MICRO MANAGING BI**CHHHHH

Sabrina, if Jon is banned from Montreal, then you’re banned from Canada! Stupid. And Rachelle, you’re a walking town buffoon/village idiot whose brain size is microscopic AT BEST.

Neda is not really handling conversation with Jon very well, she’s too agressive. It really comes across that she’s pushing for what she wants and against what Jon wants, not open to compromise.

While I agree that Neds is getting a little too aggressive, I can understand why. I luv Jon but he’s a newfus dufus! That “keepin close to a girl” info of what Arlie says is crucial to BOTH their games if they are truly trying to get each other to final two. AND I believe they are trying. SOOOOOOOOOOO, any info Arlie or anyone says, and observations / rumours – YOU GOTTA TELL EACH OTHER to stay on top of their game! It’s frustrating to see that he’s not thinking anything through and he’s not really paying attention to who talks to who and what’s been previously said. Since he’s basically relying on Neda,for his gameplay, he really needs to keep her in the loop.

ppl are too sensative so who caressss wat ppl write