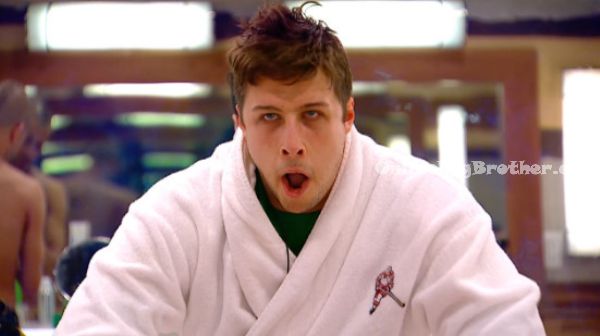 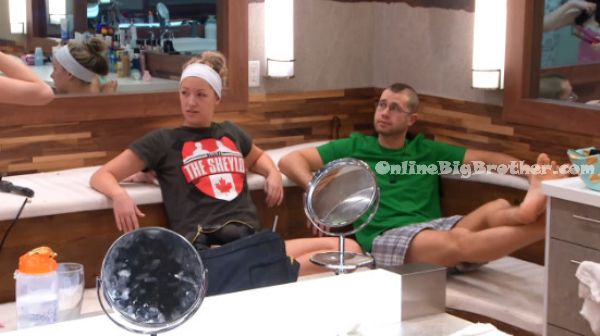 8:30am Big Brother wakes up the house guests. Allison starts talking about her birth control. Alrie says yeah control those births! Allison talks about her IUD. Allison explains how its like transdermal but trans-v@gin@l. Adel asks Arlie if he has an IUE in his butt hole. Arlie says no, maybe if you called it right. Allison says it wouldn’t do anything but block in there. Adel says no, it would catch the c*m that goes up in there.

Jon tells Sabrina that it will be her and Rachelle going up. He says if it was two weeks later I might have but right now I am not looking to make a big move. I am not looking to cause chaos. Sabrina says but they’re still coming after you. Jon says you don’t know how good I’m sitting with them right now. Jon says we can see what happens with the veto. Sabrina asks who the target is? Jon says he isn’t sure yet. Jon heads into the bathroom. Heather talks about how bad she feels about what she said last night about her sister. She says that it was about birth control and she said something her sister said, and not something that happened to her sister. Outside the bathroom – Sabrina tells Rachelle that Jon is putting us up and that he isn’t ready to make a big move. 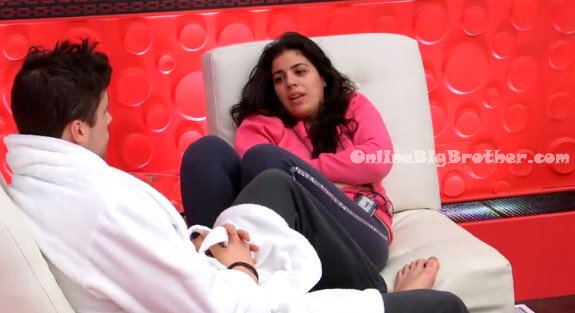 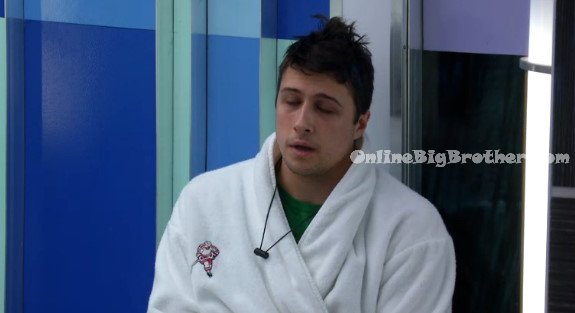 9am – 9:20am Jon heads to the HOH bathroom and asks Neda if there is a good chance I might go up next week if I don’t make a big move. Neda says she isn’t sure. I don’t think next week. Jon says I don’t think they’ll pounce this week but once it gets down to the 6 yeah. Neda says she thinks next week will be an endurance and I can win that. Neda says that Heather will take out Arlie before she takes you out. Neda says you can always wait to see who wins veto to see. Jon says its too early to make a move just after the alliance was made. Jon heads down to the kitchen and talks to Arlie. They agree that taking out Rachelle first is the best move. Arlie says we just need to get them out one after the other (Rachelle and then Sabrina). Jon talks about how worried he is for the girls to have more numbers if they take out Adel. Jon heads back up to the HOH room and asks what he should say during the nominations. I don’t want to be mean. Heather says well Sabrina is a very social player and Rachelle is a very physical player. Jon says that’s it.

Out in the hot tub room – Sabrina reiterates her conversation with Jon to Rachelle. After Sabrina says I will see you the week after. Rachelle says I almost wish we didn’t have to play in the POV and they could just decide who they want out right now. Sabrina tells her to never give up. 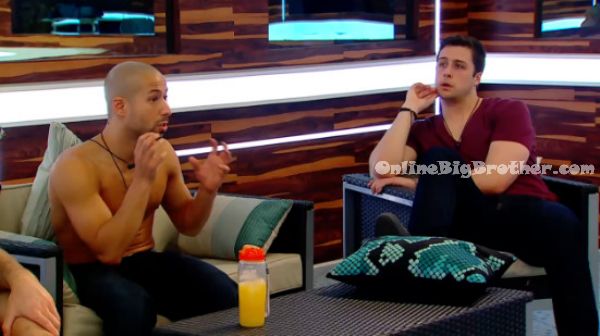 9:50am – 10am Arlie, Jon and Adel talk about how they need to stay close to the girls. Jon needs to stay close to Neda, Arlie with Heather and Adel with Allison. Arlie, Jon and Adel talk about how they will make sure the girls are never left alone. Adel tells Arlie to always be in the bathroom – you’re the pervert. JOn heads up to the HOH room. Neda tells him that she doesn’t think its a good idea to reiterate that Rachelle is a big physical threat. Jon asks what he should say? Neda says just say that Sabrina is a strong social player and that there are clear lines drawn and that Rachelle is closest to her. Jon tells Neda that Adel and Arlie aren’t okay with keeping Rachelle. Neda asks why when Arlie didn’t care before? Jon says he doesn’t know. They agree there’s still lots of time..

10am Big Brother blocks the live feeds for the nomination ceremony..

I couldn’t even come up with three favorites for the poll. Geez.

You don’t have to vote for 3, there’s no minimum. And when in doubt always vote DAWG!

I always vote dawg. Simon, thanks for not putting your name up there too because then I would have to choose – except for this poll. lol

I don’t think Neda has the strength in her body to win endurance and possibly not the strength of will either.

They all know they have to turn on each other to win, sooner or later.
Jon has to know if Rach is up she MIGHT win POV.
He has to know if he then BD-ed Arlie or Adel they could stay, as others evicted Sabs to gain favor with the guy OTB and protect their side alliance.
I mean, do any of them really think Sabs can pull out a Comp win to help an ally ?
If he BD-ed Arlie or Adel and they were evicted, he has to know how tempting a target he’d be for the girls.
So –
If Rach saved herself, that leaves Allison or Heather. Too bad he doesn’t know of her veto. BUT HE DOESN’T.

Short of doing a huge shake-up, given the “known quantities” (as best one can know anything for sure), Sabs & Rach OTB makes sense.
Odds are small either one will win POV.
If someone saves either Sab or Rach, that would be a huge exposure.
If he has to, he’ll NOM a girl as a pawn. Maybe Alli. When she saves herself, then what ?
Neda or Heather ?
Heather.
Will the trust and connections Heather has built keep her over Sabs (or Rach) ?
Who would think Sabs and Rach together could be trusted ?

If Heather gets BD-ed because Rach comes off, I think the key vote is Allison.
Does she want Sabs and Rach together ? I don’t think Arlie or Adel do.

Stupid phone! Sorry Novan, didn’t mean to thumbs that down! I totally agree!

No prob ! Thumbs down are expected.
I’m just freaked out Heather might get blindsided.
Like her or not, she’ll bring more to the game than stupid Rachelle.

I’m pretty sure you can change your thumbs down to a thumbs up if you made a mistake.

Does anyone know what comment Heather regretted making about her sister getting pregnant? approx 17:45 in the morning wake up vid

I remember her saying that her sister got pregnant while on the pill… but why she would regret saying that makes no sense to me so maybe it was something else..

i voted for dawg, heather + adel

I like that Sabrina is sucking it up instead of crying. Seems like Rachelle has given up, but Sabrina has some fight left in her. Hope she wins the veto.

Dont get me wrong I hate Sabrina and Rachelle but wouldn’t it be crazy if Rachelle won POV and Allison used her Veto to take off Sabrina. I really want that power to be used man. I wish it was used last week to save Kenny and send Sabrina packing.

Neda proves how dumb she is once again with the comment “Neda says she thinks next week will be an endurance and I can win that.”

This is the same person that is pushing to keep Rachelle over Sabrina and guess who is the best in endurance, yep, Rachelle….. Where in the world did BB find these numb nuts from…