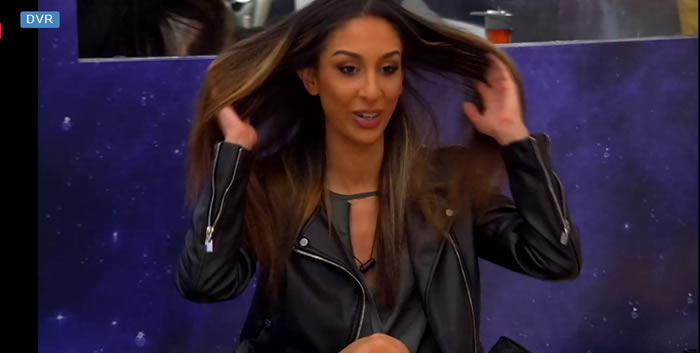 Ika, Karen and Dre (Karen is hilarious in this clip)
Karen – Neda won’t use the POV if she’s smart this is her opportunity to backdoor somebody
Ika – she’s working with those people
Karen – 100% ..
Karen says the 5 of them will be gone leaving the 7 people on the other side. They will pick them off and end up in Jury.
Karen – you can only go with the herd mentality for so long”
Karen – Jackie is pissed because I voted for her.. I was like bitch you haven’t talked to me since….
Karen and Dre say Jackie voted for William and Dre
Karen says last night she heard last Dillon, Jackie, Neda and Bruno in the bridge whispering
Karen – go f*** yourself you a$$holes .. they do have the number now.. (LOL well you had the numbers but voted them out)
Karen – boring as F*** is what they’ll name this season.
Karen goes on about the other side picking them off one at a time
Ika says they have to win HOH.
Demetres comes in
Dre mentions that Jackie thinks she’s so high up the other side’s totem pole but she’s at teh bottom.
Demetres says once they win HOH Jackie will be up their a$$ again
Karen – I don’t give a F***
Karen says she’s a distorted quilt that nobody wants..
Karen calls Dillon and Emily “Dumb and Dumber” saying they think they are with the other side but they’re not.
Karen – instead of hooterville it’s called floaterville
Karen is swearing up a storm about the other side asks Demetres to not go and tell them.
Demetres says “honestly” after someone tells him something he forgets it 2 minutes later. They laugh and call him the goldfish.
Karen joking around says she might throw up on some people on the other side. “Is that petty?”
they say yes and laugh

Ika says “they” are trying to create distress within them. (they = Neda’s crew)

Sindy and Bruno
Sindy says she knows how Bruno feels about Ika. Neda felt the same way too but after they talked to Ika it’s all good.
Bruno says every since Dre’s been nominated Ika has been hanging out with them all the time he hasn’t had a chance to talk to Ika
Sindy thinks it was good that Ika did nominate Dillon and Emily because it now “Draws that Line”
Sindy – it covers our alliance
Bruno – Look I think she’s in deep with both sides
Sindy – for sure for sure
Bruno – 100% .. at the end of the day she’s playing for her
Sindy says if Ika is still with the other side at least she’s pushing them to take Dillon and Emily out not them.
Bruno really wanted their original 6 alliance to stick together
Sindy – once Gary leaves we have 5 vets left..
Bruno – I’m so dead set with the 6 I’m blind to everything else..
Sindy brings up Bruno and “them” studying with Jackie
Bruno says he came in on that and isn’t cool with it.
Bruno brings up Sindy having zero votes on Thursday when they were nominating.

Neda tells Bruno she talked to Ika and she knows she blew up her game. “can’t play the middle no more”
Neda – we have to keep pretending the one bright side that came from it is nobody knows we’re working together (neda rolls eyes)
Bruno says Dillon and Emily want to put up Ika and Demetres
Neda – no that’s bad .. we should get out Dre and William first and then do it.. we have to start putting in their head Dre and William
Neda – Dre is way more dangerous.. she’ll put up you

Neda and Dre
Neda tells Dre she wants her to stay in the house.

Bruno and Neda
Neda – once we get out Gary and Dre we’re OK
Neda adds that Ika will be easier to handle once Gary and Dre are gone.

Karen and Dre after POV ceremony
Dre asks her if Gary is going around trying to tell her that she was campaigning to keep Cassandra. Karen says no.
Karen is fired up!

guessing you are a catty female .. afraid to put you true name .. coward ..

The only catty person here is you.

Why do people act like Neda all of a sudden became a bitch? This is EXACTLY how she was in season 2 as well.

It was funny what she said to Cassandra about her being a catty female. Total projection there. She just described herself to a T. Girl is completely delusional.

Neda will never be a good person. She cheated with a person (Jon Pardy) who already had a girlfriend. She is a scumbag. Cheaters always smell like shit.

Neda didn’t cheat with jon,they were just friends in the house,they started a relationship after the show,when jon broke up with his girlfriend

thank you .. a person not afraid of putting down her name .. and calling it like it DID happen .. wtg CANDI … thank you again ..

mother always told me .. NO ONE OWNS YOU … and Jon was not engaged .. you yourself must be a cheater to know that they smell like shit .. ps .. I am not ashamed to put my name to what I say instead of hiding behind this crap .. BAD PEOPLE .. not even gonna lower myself to give you a name because I don’t know you .. just like you don’t know neda or jon for that matter..

Oh yes… Cause we all eally believe that it is your real name. Grow up.

loving the blunt gary, he didn’t let bruno talk in circles to him, and same about him calling kevin out, smooth and sassy

Let’s just start calling the show for what it is ,, The Neda Show ughhhhh

Any one bit Neda for the win

Yo this is a game. We don’t need to be trashing people’s personal life which should be separate from the game. I’m still admittimg that Neda is still playing a good game. People be getting angry with others when something is going well in any aspects of their lives. Like ya’ll need to chill.

just watched feeds and ika and dre are so rude. just because you two don’t have emotional feelings and think that everyone is fake, you guys don’t always have to constantly bash people when they’re being real and you guys just don’t like them.

eg, kevin was talking about his breakup with pili to william, and then dre and ika were like gagging in the background. totally unnecessary.

imagine if kevin had done this when ika was talking about her breakup. kevin would be HATED. but because ika is doing it, people are like “yass queen, slayy”. i’m totally over ika and dre’s personal bashing. similar to how jason (bb ott) got away with so much shit talking, because he is in the minority (gay). these big brother seasons show how people in the minority can get away with bashing, but there is a double standard when other people bash (e.g. paulie from bb18 was hated for bashing).

I can’t get why Ika is voted as people’s favourite, she is such an awful person and SO full of herself, I seriously want to change the channel every time she’s on!