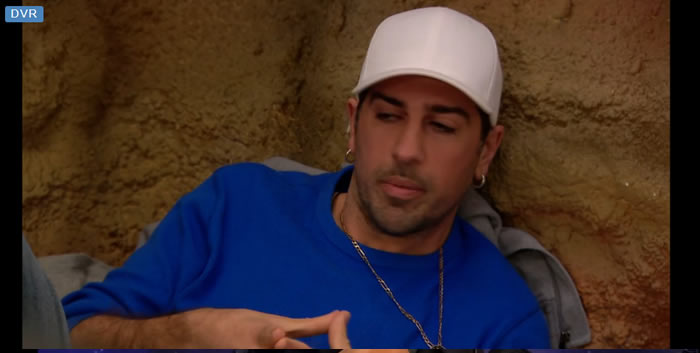 Have not competition. THey got to vote for who was have nots. The votes were shown. Instead of players with the most votes it was players with the fewest votes that got it. Bruno, Demetres, Emily, William are have nots

Kevin – how am i Supposed to explain my thought process to the audience..
Bruno – they’re not getting this sh1t..
Kevin – you get boned every time you play this game

Bruno – I’m here to play a F****G game you know.. I’m so tired of this
Kevin says Gary didn’t even get to be a have not
Bruno mentions that Gary is ‘So f***G protected”

Kevin says Jackie will be going after Ika and Demetres after that
Bruno – I’m not far behind.. this game so f***g stupid
Neda joins them says the game is unfair.
Kevin – they showed every single vote
Sindy joins them
Neda – they want people to flip out what’s the easiest way.. show the votes
Kevin – Gary put 9 in mine
Neda – Gary’s a little shit

(They’re all pissed because their games have been exposed)

7:14pm Karen and Gary
Karen – how about that bitches
Gary – I love it.. I love it lets make feasts.. I’m making pork chops and chicken breasts
Gary – you see how mad Neda is because I gave her one
Gary says Ika has already dropped her.
Karen – I’m getting rid of Jackie over Dre
Karen – I f***g hate these people
Gary – I can’t believe how conniving they are.. gutter people

Gary about Kevin – You see how his strategy got exposed ..
Gary – see how he got exposed..
Ika comes in.. “you think it’s April fools”
Gary – no it’s backwards week..
Karen – we’re talking about how all the alliances were exposed, we know the pecking order now
Ika – not necessarily
Karen – it still shows..
Gary says it’s funny that Neda is pissed at him for giving her 1 chip when he knew she wasn’t going to be a have not and she gave him 10.

8:26pm Storage room Sindy, Ika and Kevin
Talking about how Shady production is

8:33pm Ika and William
AS jackie walks by. . Ika “We all know who I wanted to go on slop”
Ika tells William she thanked Jackie for giving her 3 votes otherwise she would have been a have not this week. Ika explains that Kevin gave himself votes to make it look like people were targeting him.
Ika goes on about how much she doesn’t like Jackie, “she’s fake”
Ika says Jackie doesn’t like Dre.

8:40pm Emily and Gary Storage room
EMily says the reason why he got so many have not votes is because he’s entertaining. Canada would love to see that
Emily – I put 6 in yours and 4 in dre’s
Gary – I didn’t campaign to keep Cassandra so if that’s they reason you vote me out you guys are idiots..
Emily says everyone has told her Gary is going after Dillon and Emily

8:50pm Neda and Ika
Saying that Gary is playing the victim card.
Neda – he made a personal attack against me.

9:45pm Jackie and Sindy
Jackie is crying because Ika is being mean to her.

9:50pm Gary and Ika
Gary is telling her about Jackie. Ika says she’s not going to stop. Gary warns Ika about being too mean they might give her a mean girl edit.

Bahahaha! Freaking love this twist! In yo face Neda and her minions!

Pathetic twist just to save their poster boy Ghandoo Gary. Wait for plenty more of these twistos twists to interfere with the game. BBCan producers don’t hold back their rigging lol

Boo Hoo – Bruno, cry me a river! One twist exposes his lying ass and he can’t handle it. Same with Kevin and Neda. Meanwhile their alliance has been steam rolling through one side of the house. Seems like Production got the hint and said it’s time to do a little exposing for themselves. – And it showed even more of what a bitch Neda can be. I do like the thought process Gary was onto with the whole backwards Week, and whoever the HoH votes out the other person will actually be voted out instead! That would be interesting, especially with this have-nots backwards comp this time.

Of course he can’t handle it. Big brother Canada is awful with their twists. It doesn’t matter how good of a game you play because the twists will just mess everything up. I want to see which person plays the best game, without the help of twists, and makes it to the end based solely on their moves inside the house.

I’ve said it before and I’ll say it again – get rid of these ridiculous twists and let them play! Even when a twist helps my favourite – I hate it!

Bruno, bud. You live in Canada. One of the most liberal countries there is. Canada wants a woman or a gay man to win this season. Not a straight male. Sorry, but you should check your privilege. I AM JUST KIDDING. THIS IS SATIRE.

I mean that was pretty dirty what production did. It’s hard to be on a show that uses lies and deceits if they gonna continue to do shit like this.

Wait, I’m super confused!! What was the twist, and how was everyone exposed?

I think it’s great when the control is taken away from predictable outcomes. Bruno the game is playing you. Learn to adapt and shapechange.

Reverse doesn’t mean opposite. That’s serious BS. How can you be strategic and have a game plan when production change rules like that?

whenever production tells the houseguest to feel free to talk about what they are thinking in a task… think of topaz’ noms in season one. think of ika with the letters season 2….just think it’s fourth week. shenanigan week on big brother canada, and keep your mouth shut if you don’t want your game exposed.
some people. yes i was shaking my head, like they don’t know that only the d/r’s are sacred.

Boo hoo Bruno! Just because things aren’t going your way you act like a spoiled brat, pout and sit in a corner. Get over yourself! Twists are part of the game. Adapt or go home but stop whining because you and your minions aren’t getting your way! You are such a poor sport so maybe you should take your ball and go home. The only thing that was missing from your tirade was you stomping your feet and telling everyone ” I don’t want to play with you anymore”.

You gotta love Karen! She is quite funny in her own way! Her telling Gary that Jackie having notes in the house was like having “contraband” in prison was hilarious! I am now a Karen supporter and hope she gets far in the game! Do you hear me BigBrother production?????

There is two schools of thought. The first is this bbcan5 or bbusa5? A pure game, which is a traditional game without silly twists is what Bruno is complaining about. However, they are playing bbcan 5 which is by its very nature not fine. I like Kevin giving himself cookies so bravo, but Bruno complaining, if they don’t say they aren’t going to tell others always assume it will be shared! That’s been a staple since bbcan1.

Kraken day by Kracky. Jump into the have-not fiasco or was it
hoohaw.
More Kraken!!

I’m sorry but how is Neda pissed off at a twist that didn’t go in her favor? She has being handed the game on a friggin platter and she’s pissed off at production?! Give me a break!
Omg this is the worst season EVER!! I can’t even watch anymore..I just come on here to see how I’m going to do in my pool. I can’t watch or support a show that gives somebody immunity, lets them win HoH, POV..then when they win an HoH they let them vote in the next HoH and I won’t be surprised to hear she will be playing at the end of the week. If production is rigging this game for anyone, it’s Neda..which is too bad b/c she is constantly saying Jon shouldn’t have won. She was the mastermind blah blah blah. Well now even if she wins this season, she will never get the credit like most others do..everyone can see through what is going on. I’m not saying there has never been production manipulation before but they didn’t make it so completely obvious. Anybody that isn’t stuck up Neda’s ass can see that they ventured this whole season around her..if she looses I will be shocked. Happy to see her big head walk out the door but shocked

Bruno was all happy when he thought the backwards week twist went their way, now he is pissed. Suck it up Bruno, you know this is how Big Brother Canada works. Not a fan of all the twists either but it is was it is. At this ponint I would love it if the HOH vote is backwards too, but at the very least the HOH might think it will be and vote the opposite way. Should be interesting!

The Kraken show is tonight. If you have any questions or comments let us know.. https://www.onlinebigbrother.com/tag/obb-kraken-hour/

Head of Household Competition is today!

I don’t like ANY of the returnees. I find them ALL quite awful. Childish and entitled. Why do they always have bring back former players in all these shows? I wanna see the new casts and watch THEY play. I don’t care about a handful of DListwannabes trying to stretch out their 11 minutes of celebrity. MOVE ON!! Yo Next chapter.

Truth be told both Kevin (I’m NOT GAY!!!) and Bruno (Give up the fight Darling. Just shave your head already) just made me want to stab myself in the eye the entire time they were on in their original season.

Ika is moderately amusing but more often tiresome. Yo Ika? 2012 called. They’d like it back!!

Sindy….honestly? I just wanna punch her in the face, send her to Jenny Craig and then send her to hell. nuff said.

Question? What is Gary’s purpose? It’s a real question…? He’s just a doughy lazy person who lays around whines and eats. I’m curious..? Did he agree to come back to the show so he eat all the free food..?

What’s a “Neda?” Awful name. But? Awful person so…. Also? She’s a fashion stylist? Really. Coincidence. I invented air. AND! Co-co-incidently…? I also invented the Turbine Engine. nuh hah I don’t know what it’s for? I just invented it. Then passed it on and said “Hey. Knock yerselves out guys my gift to you”. so…She’s a stylist and I maintain life on earth. Cool

Cassandrah. Here’s my thoughts take’em er leave’m. Here’s hoping a brick will fall on her head whaaaaat?….she’s annoying. And. She gone.

I like and like to hate the new kids because they are stupid, gullible, annoying, likeable and just trying to figure out the game. Let THEM play. Lose the dead weight BBCAN BBAM. Give the audience some freakin’ credit!