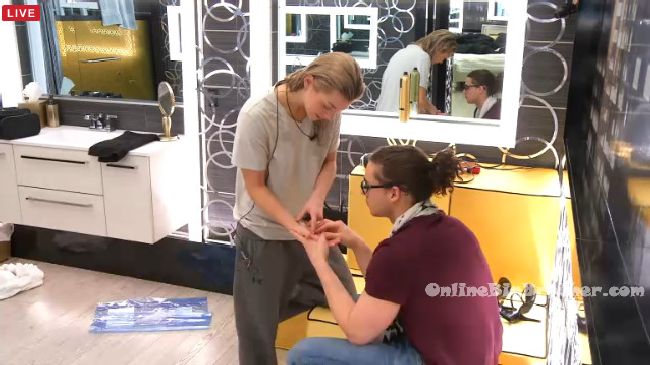 10am The house guests are awake. In the bedroom – Nick and Phil are talking. Phil says don’t worry about it. I have it all covered, all the angles. We’re setting ourselves up really good. Nick says I had a DR (Diary room session) about Dallas covering up his tattoo. I was like can I draw a snake on him.

10:15am Raul tell Jared that we have bed bugs. Jared asks we do? Raul says no the pink room. Jared asks really? How do you know? Raul says because everybody has bites on them. Jared says shut up, no way! I’ll believe it when I see it. Raul says Dallas has them and Philippe (?) has them. Big Brother blocks the feeds.


10:45am – 11:10am In the bedroom – Cassandra tells Tim that she is keeping a good relationship with Loveita while everyone else is shunning her. Tim says he thinks Loveita’s going to be around for a while. She won’t go next week. Tim says if Christine were to take Loveita off SHarry would go home. Cassandra says the thing is Jared picks the replacement. Tim says oh yeah I forgot that. They talk about how Sharry doesn’t have the ability to talk her way out of things. Loveita joins them. Loveita says I am on the block so I am going call out anyone who is bullying. In a nice way. Tim asks how are you going to do that. Loveita says in a nice and respectful way. There is such a thing as silent bullying. Tim asks what is your intent with that. Loveita says it important that people don’t cut ties and start treating people poorly. Loveita comments on how she is okay going home. Sharry wants this more. Tim says if you say that its going to have the opposite effect. People aren’t going to want to keep a bigger threat. Tim says you might want to change the world with calling people out for bully but I don’t think its going to help. Maybe make a bumper sticker. No one signed up to be nice to each other. We’re not in a cult where everything has to love each other. That’s not big brother. If this was a game full of Loveitas, I’d change the channel. Tim says calling someone out for their flaws isn’t going to make things better. Tim says if someone stinks of shit, don’t get your hands dirty trying to pick it up.

10:50am Jared talks to Dallas. Dallas says my biggest mistake was making bonds to early. After a week of game play I was like f**k this isn’t going to benefit me at all.

11:10am – 11:15am Dallas says that he woke up with a clear conscience today. Loveita asks did you clear things up with Rams? Dallas says no. He’s a snitch. He exposed parts of my game and your game. After this I’ll be friends with Rams but as of right now .. Loveita tells Dallas he’s a good guy.

11:35am Tim tells Loveita that she should just kill Sharry. Loveita starts to get upset. And the award goes to…

HOH room – Loveita talks to Kelsey about how she wants to get to know her. Kelsey says she wants to get to know Loveita too. Loveita says that she would campaign for Sharr before she would campaign against her. Loveita tells Kelsey I think you are a kind and nice person. Kelsey says at the time she just didn’t know what to say to Loveita. Loveita leaves and Kelsey tells Cassandra that Loveita is trying to hard.

Maddy and Ramsey talk about how Dallas threw them under the bus. Maddy says Dallas was the one that was lying. Loveita joins them. Maddy says F**k that I’m not taking the blame for that sh&t. I swear to f**king god if that kid gets off scot free. Dallas just looks like an a##hole. He could have just come to me and told me before he did it. LIke hey this is what’s going down. I’m going to expose us. It doesn’t mean I would have been okay with it but at least he would have warned me first. All I know is that Dallas is dead to me.

12pm The house guests are playing hide and seek. Phil won the first game and Cassandra won the second game. 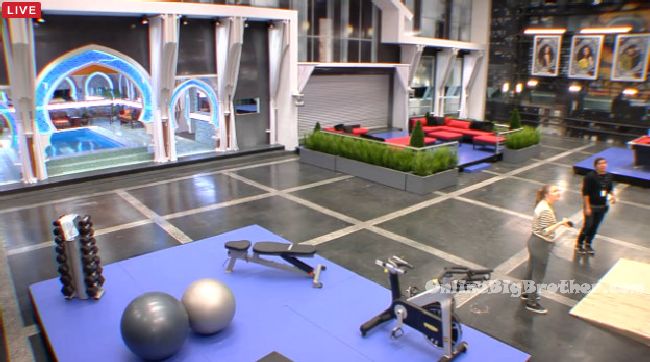 Dallas is an idiot.

bed bugs are very possible..they could even be there from last year..those things are reziliant ..can live a long time without a food source too (food source=ur blood) lol
but if they do indeed have bed bugs..odds are they came in with someone! (most likely in luggage)
#BBCAN4=BED-BUG CANADA 4? the Grand Hotel allright eh?

Yup. Dallas brought the bed bugs to the house

My favourite players so far are Cassandra, Tim, Nikki, Maddy, Ramsey and the brothers. I love Loveita but she reminds me of Joey. She’s too honest. Jared and Kelsey are the new Clelli. I absolutely despise them strategically and personally. Plus Kelsey is still being a whiny little brat about last week. Get over it. Loveita tried apologizing to you. I hope Kelsey gets booed when she’s evicted and Jared is an idiot for not accepting Loveita’s deal. He’s a bully. He’s like clay and Kelsey is like Shelli. They play with their emotions rather than their heads. Raul is absolutely irritating. His voice drives me insane. Dallas is the biggest idiot. He’s not Donny at all. He’s one of the dumbest players this season. And Kelsey and Jared are bullies. They have HOHtitis. This season is absolutely terrible. Paige left and now Sherry or Loveita are leaving. Hate Kelsey Jared Raul and Dallas. Love the rest though.

I’m so obsessed with Tim lol he’s hilarious. I can’t even…

His season on Big Brother Austalia 2013, was one of the best seasons I ever watched. If you haven’t seen it, they have his season on youtube.

I won’t speak about him personally, because I don’t know him, but Dallas is a ruthless player. This can either be a boon or a curse and for Dallas it’s a curse. He overplayed himself the first week. He threw Ramsey and Cassandra so far under the bus it isn’t even funny. Does anyone actually even trust Dallas anymore? If he’s not backdoored this week, then I can see a lot of people gunning for him next week. Ramsey’s been burned, Maddy is pissed (unless she’s lying), and Cassandra has always had a bone with him.

Tim coming in the house really threw Dallas off, because he thought he’d be able to play the class clown, and now everyone sees he was doing just that… playing a role. I’m not entirely sure that’s who he really is outside the house either.

on the feeds just got a leak of the backyard, 2 people standing around, seems like they are setting it up back to the normal backyard. So we should be able to see them mingling out there in a little bit FINALLY.

Thanks Hann, I caught it too and added it to the bottom of this post :)

I like Cassandra, she surprising Canada because we all thought she would be a useless player like pili and ashley last year. Kelsey doesn’t really play but I like how she’s a good person, first impression you might think this girl is full of her self, but she’s actually down to earth. Christine seems like a nasty human, she ruthlessly talks shit about Loveita and others, when it was not really necessary.

I love Loveita, she was my pre-season favourite!! :(

Is it weird that I actually kind of like Maddy? Thought I was going to hate her based on preseason stuff but her no BS attitude is pretty refreshing

Apparently I am the idiot because I wrote the first comment and said Dallas instead of LOL. Pretty much how Dallas said the wrong name in the voting room.

I love Tim! I watched his season of Big Brother Australia and liked him a lot. It’s so funny how he said build an invisible spaceship and looked at the camera like these people are actually considering my idea like wth!
he is so funny and brings laughter to the house
I hope Tim wins the game or stays in the house for a long time. TEAM TIM!!!