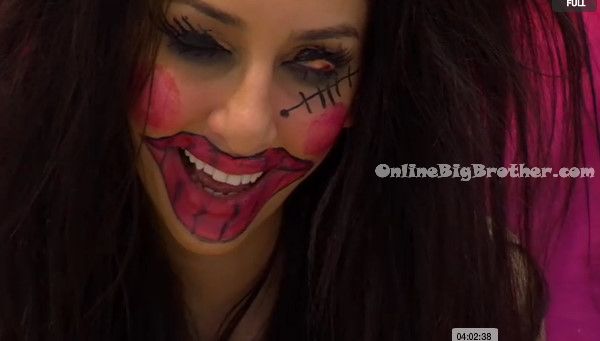 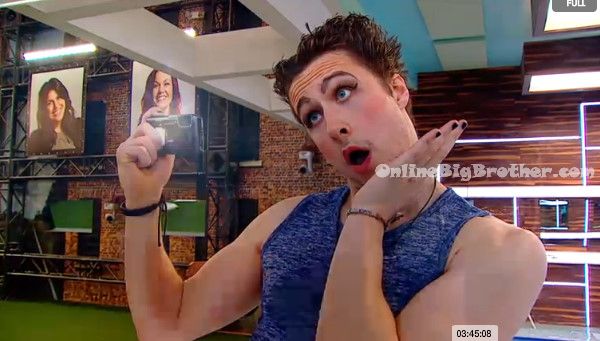 1:45pm Kenny says the two most important things you need in life are h*mping and fist pumping! Everything you need you can find in your kitchen – You need oil, butter and cooking spray! Arlie then takes the camera up to the HOH room for Neda to use. He tells her the battery is dying and it probably needs to be cleaned because its all oily from Kenny. Rachelle starts taking photos of Neda. Neda flips her eye lids back. She then does her video.

In the main bedroom – Paul has transformed into his inner gay Paulina. Adel and Paulina interview. Paulina then interviews Sabrina. After Paul says to Adel I am just playing it up like you said to.

2:20pm Out in the hot tub room – Kenny and Andrew talk about how they think Heather’s character for the hashtag challenge is the worst ever. They talk about how ridiculous Arlie is and how he actually tried to die his n*ts red with cranberry juice which has no die in it what so ever. They talk about how Arlie will have to shave his head now. Kenny and Andrew head to the pool and talk with other house guests. Andrew says that he really doesn’t think Big Brother Canada thought all the guys would have a homoer*tic theme. Andrew asks Paul if his kids are going to be disturbed by him dressing up as Paulina. Paul says no I act goofy at home and we wear wigs and stuff. They’ll think its funny. Sarah comments on how there could potentially be a lot of s*xu@l harassment cases against them. Andrew asks for real or fake. Sarah says fake. Andrew says maybe if you rubbed your n*ts on someone. Kenny says uh oh! 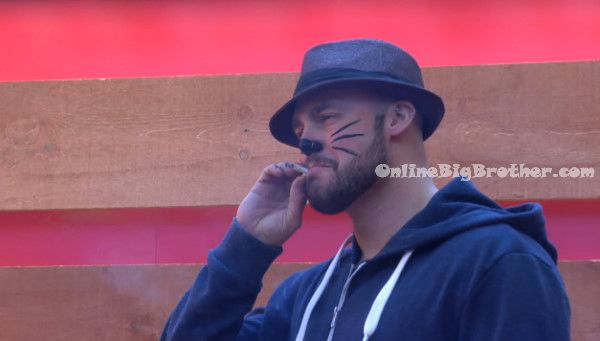 2:25pm – 2:50pm Up in the HOH room – Rachelle and Ika are dancing. They talk about what the special power might be and how they think it will be something good. Rachelle and Adel have a no blinking contest. Adel loses after 15 seconds. Adel and Rahcelle join the others by the pool. 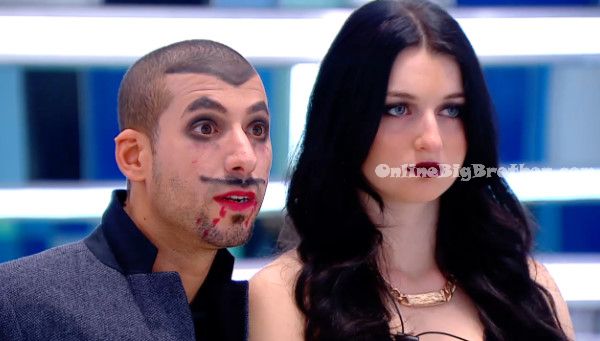 3:15pm In the havenot room – Adel and Paul are whispering. Paul says I still don’t see them talking game with you dude. When is that going to start, when I leave?

3:35pm In the hammock Neda and Jon are talking. Jon says that the competitions are getting a lot more even. I can’t wait for you to win HOH. Neda says yeah. Neda says I also don’t think another person is coming in. I think that just happened the once. Jon agrees. Neda says out of the guys I think you and Kenny did the best in the challenge. Neda says it is going to say so much. Rachelle joins them. They think Kenny might win it. Jon says ultimately it will come down to who’s video is the funniest. Neda asks what he thinks the power is going to be? Jon says don’t care. Neda says what if Adel wins it, he’s funny. Neda says Paul could even win it. Suzette from last year had a lot of fans, like a lot! Arlie joins them and they talk about the other house guests. 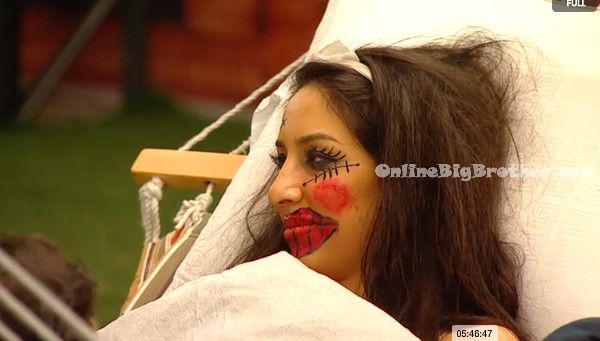 3:55pm – 4:15pmSabrina does her Hashtag video in the diary room with Sarah recording it. She keeps messing it up and does like a million takes.

I am sorry, but there is nothing this group of losers can do to make themselves worthy of a prize. I love Big Brother, but really, especially the women on this show are disgusting. There isn’t a brain among them. All they do is spend their day discussing each other, then hugging. If Sabrina cries one more time, I think I will puke. The men are amusing at times, and are the only thing worth watching.

I’m a little disappointed they all stopped the act, but they kept up their character longer than I could

I love Adel and Paul moments, he always rips him a new one lol. In his interview with Paul, he introduced him as an ugly beast ROFLMAO

I was not even able to pick a favorite this week. I hope things pick up soon because it is getting boring.

If Scott was in the house I wonder what he would do?

She named herself BUMMQuisha and stuffed her pants to make her bum look big.

#Hashtag Feeling like a stranded whale without the feeds, hoping for Simon and Dawg to come up with yet another awesome solution!!!
#Hashtag Fingers Crossed!

The three Newfoundlanders are the top 4 most liked houseguests! Represent!

Kenny is hilarious, the roommates especially Sabrina are gonna sht when they find out hes actually gay.

#Rachelle’s the most boring unentertaining human on Big Brother.

Where can I see Jon video, in which video?

It will be uploaded here: http://youtu.be/7kQ-MV_Nuzc

There was a couple problems with the upload.

Not to be mean, but Ika is real pretty when he covers up her five head…I like her headband