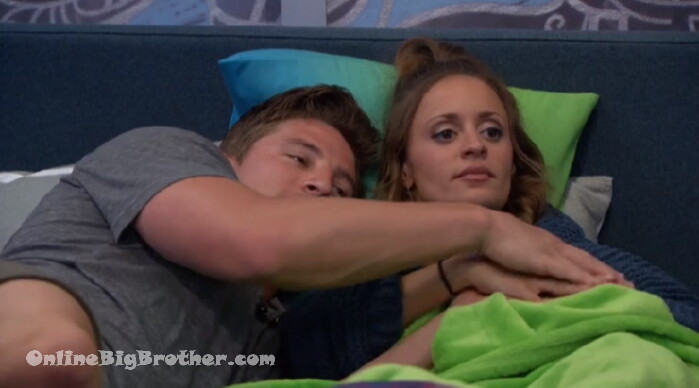 7:01pm Swaggyz is pissed at Winston..
Swagz – I was in the Storage room talking to Tyler he came in and said Cool meeting..
Bayleigh – Listen no drama this week
Kaitlyn – I’m going to figure it out and talk to everyone this week

ROCKSTAR, Bayleigh and Swagz. Swagz is going on about what was said in the Storage room. Rockstar tells him to be cool and let it ride. If Kaitlyn sticks to what they agreed they’ll be OK.

Rumours are going around the house that Scottie was the one that Flipped based off how he acted. (ROCKSTAR knows it was Kaitlyn, This story won’t stick)
ROCKSTAR tells Swags they are having some girl time int the HOH tonight. 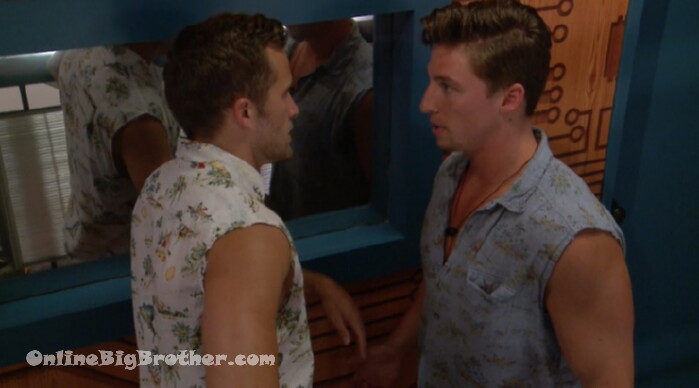 7:04pm BROS
Hard to hear but I got this “Steve’s going up and I think it’s his fault” and “That’s how you’re going to spill it” 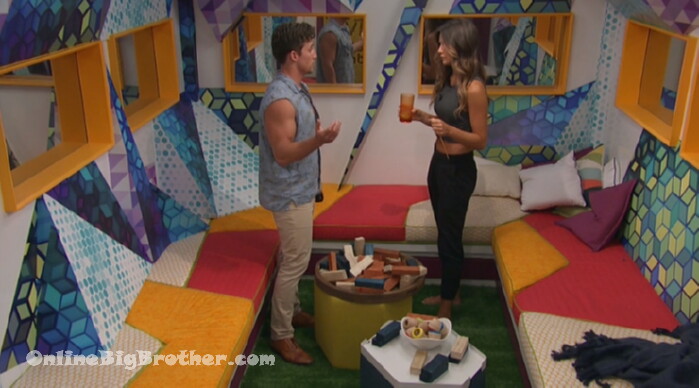 7:10pm Geometry room Angela and Brett
Brett is saying that Winston is getting worked up
Brett – I feel like this is a good thing
Angela – this is a good thing
Brett – why is he upset
Brett says Winston told him he got worked up. After Winston snapped at Swagz Brett was trying to smooth it over.
Angela – it’s so confusing.. I don’t know what that was.. it make no sense..
Brett – he was like What I can’t talk to Tyler.. it’s just causing issues.. and the one thing he doesn’t realize It’s so early right now and people just need a reason for an excuse.

Brett – he’s just painting a HUGE target on himself .. and he already had one on him..
Angela – he even had one from Kaitlyn.. f** Winston
Brett – we just need to mellow out 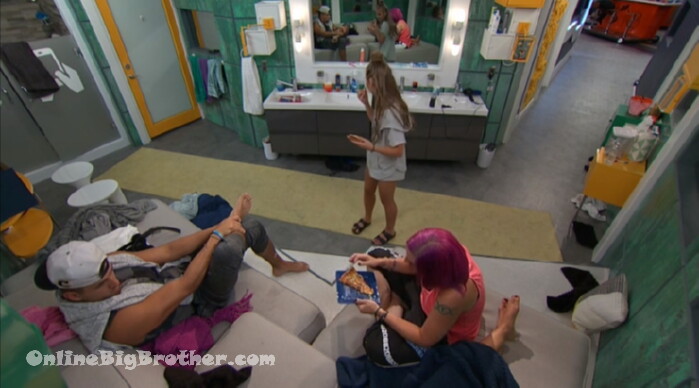 Kaitlyn – I’m getting wasted tonight
Kaitlyn – I just want you to know … in this room I love you to death.. I don’t know what I am doing this week I want to hear more about this power which they’re going to have to tell me about
Kaitlyn – I’ll keep you updated
Haleigh – are we an option
Kaitlyn – no you’re not a f***g option.. Specifically you three are not an option
Kaitlyn – I’m just letting you know I need to hear what this f**ing power is..
Fex – they will have to say something to you
Kaitlyn – lets just to be continued please. 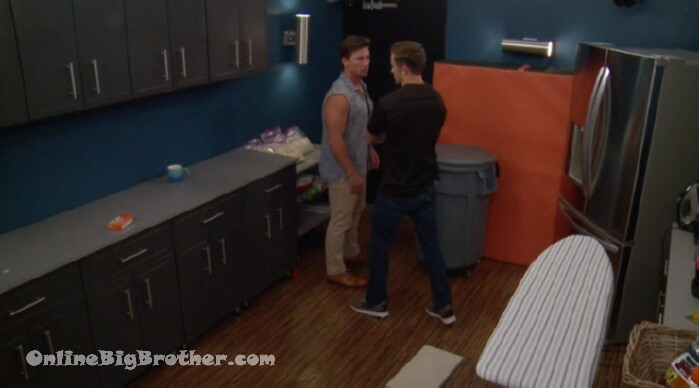 7:22pm Brett and Winston
Brett tells him to Mellow out people need the smallest excuse to put someone up. 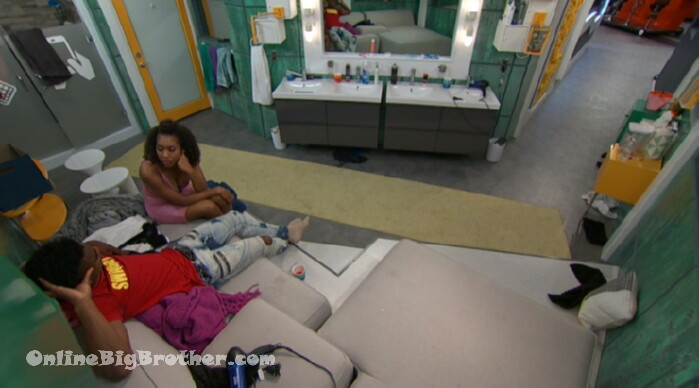 Swagz thinks they went to Kaitlyn scared her and told her they had the power and she was going up. Bayleigh says they can’t blame her. 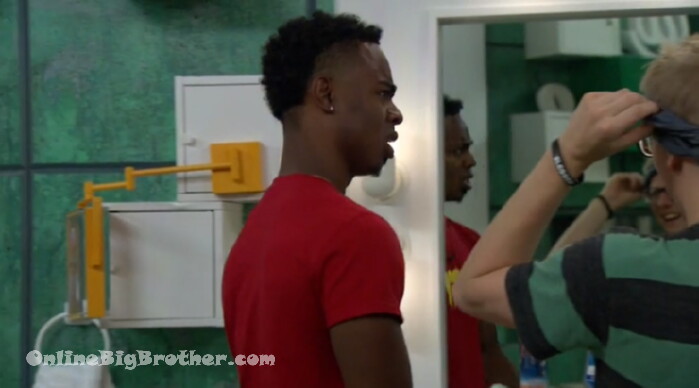 Swagz says the Bros really think he flipped, “they’re being stupid.. we both know who Flipped.. just be nice all week” 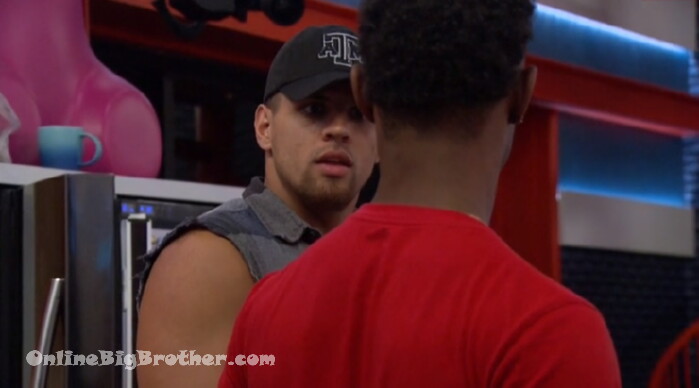 Swagz tells him to be Cool

Swagz – ROCKSTAR might have flipped, she told me she was conflicted

Swagz thinks it was ROCKSTAR over Kaitlyn

Swagz thinks that Kaitlyn might put him and Bayleigh up.

ROCKSTAR joins them.. They’re talking about the power.. ROCKSTAR thinks the power has been used.

Get your Feeds through this link

Brett is a douche

Brett is a douche

Simon
Reply to  Brett is a douche

I think both him and Winston are but as Stupid Bros characters they are perfect.

Bromances Rule
Reply to  Brett is a douche

Granny
Reply to  Brett is a douche

First chance he got last night, he was snuggled up to Kaitlyn. He hasn’t given her that kind of attention before. He couldn’t have been more obvious.

This week is going to be all over the place with Kaitlyn’s aura telling her who to put on the block. But, I’d rather have her aura than Paul dictating the game.

Yup, this week will be a willie week

Oh this is gonna be fun to watch. Whose side is Kaitlyn really on? I don’t even think she really knows. But I know she’s going to love all the attention from the guys this week.

She’s actually in an ideal place right now as HOH. She can easily play both sides, and with Tyler by her side, she will, hopefully, make some good decisions.

I’m not completely caught up with last night, but my guess is she puts up Scottie and Swaggy after she convinces Swaggy she needs him in veto comp to target Scottie.

Loving this season allready. I’m very surprised lmao A 7-6 vote right out of the gate, man it doesn’t get much better than that on BB. Definitely no Kraken yet

Kaitlyn won, Oh wow!! It will be an interesting week for sure!

OMG Brett…….could you be more obvious???? And Kaitlyn is so clueless that she’s buying it. I don’t understand what happened in the storage room with Swaggy, Tyler & Winston. What the heck is Swaggy so upset about?

Gonna be a good week!

To be fair, this isn’t the first time she’s shared a bed with Brett. I’m sure she’s very appreciative of the attention

I actually like the bros (ducking as the flames come hurling towards me :-)), but JC thoroughly entertains me, so my vote is for JC. I’d trade out Swagz in a hot second for anyone or anything, even the fish tank.

Totally agree with 2nd part of your post. I am not sold on JC… I read somewhere he was going after a couple of hg private parts with an ice cream scoop???? If true, Weird!!!!

Swaggy is a jackass. I enjoyed his expression when Steve got axed.

Can’t stand Kaitlyn – she’s the only one that annoys me so much and now she’s got the power she’ll be even more annoying. Her jealousy drama was so childish.

I wonder what her bf thinks.

yea, Kaitlyn is more annoying than Swaggy imo. she comes across as a jealous, bitter, insecure girl masking it with her over the top “happiness” and ‘love everyone/ aura/ universe’ talk. fake as f.

I can see Kaitlyn being as manic as Vanessa but without all the planning.

Just an observation,doppelgangers……….Brett and Sam.Would almost say they are related.