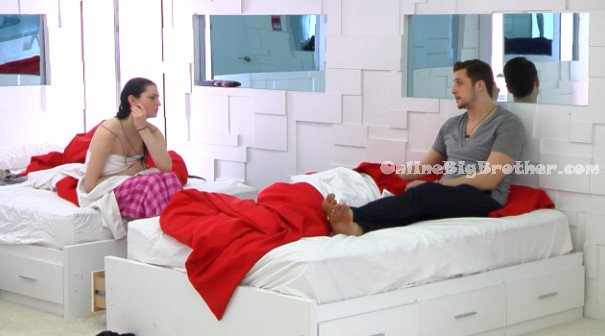 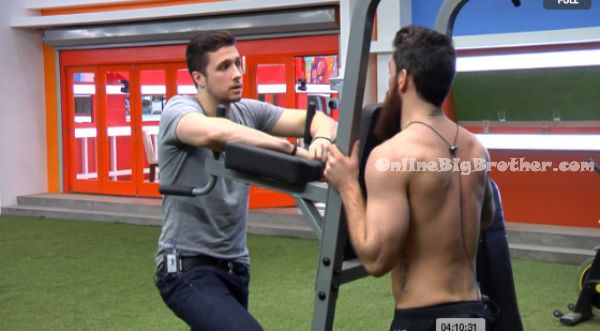 11:40am Out in the hot tub room – Andrew, Allison, Sarah and Adel are talking about really random things. Meanwhile Kenny and Jon are in the backyard talking – Kenny tells Jon about how Sabrina has been campaigning hard against Gordo. And he is her best friend. Kenny says she needs to go.

In the bedroom – Jon tells Rachelle that he knows Andrew is not done campaiging. Jon tells Rachelle – you CANNOT at any cost change your vote and not vote out Andrew. Jon says that Andrew is not lying down. Rachelle says that she wouldn’t do that to Sabrina. JOn says if you don’t change your vote – Andrew will go home. It will be a 5-4 vote. Jon says I want Andrew gone, Neda does, Arlie does and sure as f**k Adel does. I can’t have Andrew stay in this house. DO you think Kenny or Andrew would have your back? Rachelle says she is not changing her vote. Jon says this cannot get back to Sabrina .. you can after but if it gets back to her she will go around and start campaigning and screw things up. People will be like look how hard Sab is campaigning. Rahcelle says I thought Andrew was done. Jon says but he’s not. Jon says you will f**k me completely if you tell this to Sabrina. I am telling you this because I said I wanted to work with you. Jon says I know for a fact 100% that Neda will vote out Andrew. Rachelle says I would never vote out Sabrina. Jon asks so what will you tell Sabrina when she asks what we were talking about. Rachelle says I don’t know. Jon says just tell her that I was nervous and wanted to see if we were on the same page.

12:10pm In the bedroom – Arlie and Jon talk about the votes. Jon and Arlie both agree that Kenny is campaigning hard for Andrew to stay. Jon says do I think Rachelle might change her mind… Umm yeah I do. Arlie says there is no way she will change her mind. She is so far up Sabrina’s a$$ its not even funny. Jon tells Arlie – I don’t care what else is going on.. this is where I want to be in this game! Arlie and Jon agree – we are so solid! 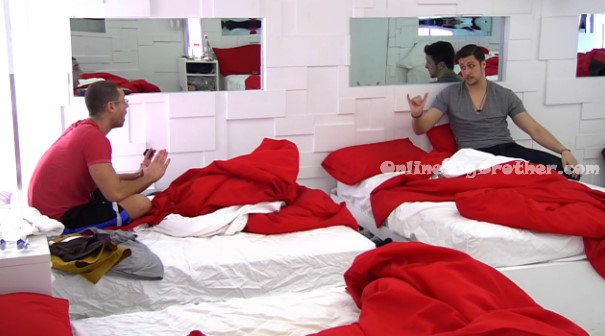 
In the bedroom – Jon warns Sabrina that he doesn’t think Andrew is ready to go home yet. Sabrina asks him what’s going on? Jon tells her that its okay you have 5 votes. Sabrina says okay but you are making a light go off in my head.. is he really rolling over or is he campaigning. Jon says I could be completely off and Gordo could be rolling over and done .. Sabrina says I don’t know what to believe. Jon says he wouldn’t be talking to her if he wanted her gone. I need you in this game. I want to work with you. Rachelle joins them. Jon says you’re going to stay .. and then you will know where the votes lie and who you can trust. Sabrina says now I am scared of next week .. am I going up again.. am I the next target? Jon says no you’re not. Sabrina says I don’t run my mouth. Jon says you don’t. Sabrina says I know, I don’t know why Adel says that.. he’s the one that runs his mouth. Jon and Sabrina hug and he leaves. Adel joins them. He says he wants to talk to her. Sabrina ask Rachelle to leave. Adel says no it’s okay, I know you two are hood rats together. He tells Sabrina that there is a lot of campaigning going on. Go look at what’s going on and see who’s whispering. I think I might be the deciding vote. Adel says next week I am safe as f**k, I don’t care! Then everyone can suck me off! Adel says that Kenny offered me two weeks safety .. no one can offer me two weeks safety! Adel says that he is not voting her out. Adel leaves. Kenny joins them and says Sabrina tells him that Adel just told her that you were campaigning to him for Andrew to stay and that you promised him two weeks safety. 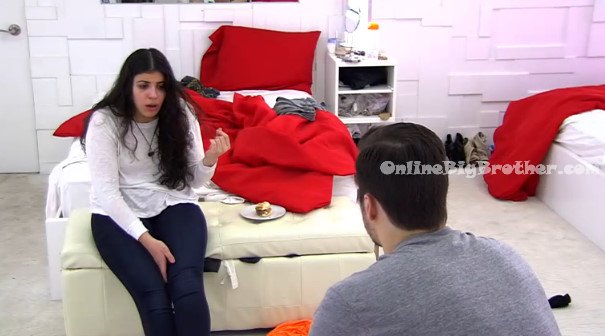 Haha. Rochelle is about to cry, becaue Kenny betrayed them…

Jon needs to stop freaking out or he’s going to screw his new alliance over completely and sabrina will go home. He needs to just calm down and let Andrew be voted out!!

What are you doing Jon??????? Sabrina is going to start a shit-storm and end up going home. You should have just lied and said you’d vote out Sabrina. Then Andrew would be gone and Sabrina would go crazy at the narrow margin. She could have easily gone next week! Now Andrew, Allison, Kenny, and Sarah are going to be a solid alliance. Aaugh

Many of you that come here during BBUS know how wild and crazy the comments can get. This problem is usually not a around during BBCAN but sometimes we all need a friendly reminder about how to conduct ourselves in the comments. Everyone can get carried away with this show many times and I’m first on the list.

Please refrain from spamming the site with multiple account names to try and push your opinion of a houseguest into the forefront. I’ve found a few people doing this and its really not necessary. If it continues the IP address of those people will go through increased scrutiny and it will probably mean hours before their comments go live on the site as it means I have to dig through the spam folder to moderate them.

With that said the comments this year are amazing I’m finding myself reading all you have to say more than working my day job, bad me I know..

Love the opinions, love the bashing, love the game analysis and love the jokes!

Kenny and Sarah are just pure evil, hate and VICIOUSNESS! They can’t just say, “Jon is lying.” Their rant is full of so much hate, venom and vulgarity when they say it that they actually stress those words with a passion. THAT’S how you know they MEAN what they say and it’s a direct reflection of who they are as human beings.

Do they even see the hypocrisy in what they’re doing? They’re doing exactly what rage “The Other Side” is doing – Lying, swearing on something, back-stabbing, playing both sides, etc., What makes them think the way they lie and play Sabrina is ANY different?

Who’s actually on whose side anymore for real? So many lies and such hate that I can’t keep it straight.

So Andrews last chance strategy is… bullying the weak? Really?

Why the fuck is Jon number 1. What he did here is so stupid. Its like a kid who has a secret plan and tells everyone about it just so everyone can say that he is amazing. Kenny sarah allison and arlie better vote andrew out now or the divide will be very clear. Also I now not only hate Sabrinas personality but also her gameplay. Maybe adel didnt say but I will say it. She is dumb!

This, for me, is the 1 conversation that tells me what Arlie will do.

Think we need an IDIOT of the day award!

Jon put your dunce cap on! Of all the stupid things why would you talk to Ratchet? JC lad she is a SURE vote to evict Andrew. Sabs her BFF in the house. Morons get what they deserve. I know a lot of folks here like Jon/Neda but he could be next gone, and for no reason other than stupidity. Andrew was a done deal and still goes unless Arlie changes his vote it appears. Why, why, why you big dummy? Adel was their F10 target 1st and you second. The margins on who is really with who are razor thin and still undefined IMHO.

Still betting most of this is a production rouse personally. :P

(using over the top hand gestures to emphasize his points)

im literally going to hide in the toilet stall for a few days, maybe a week

im literally so glad we had this talk

i literally will come to you in the have not room at 4:38 am in 17 days from now to continue this little chat

literally until then just dont do anything, dont even breathe