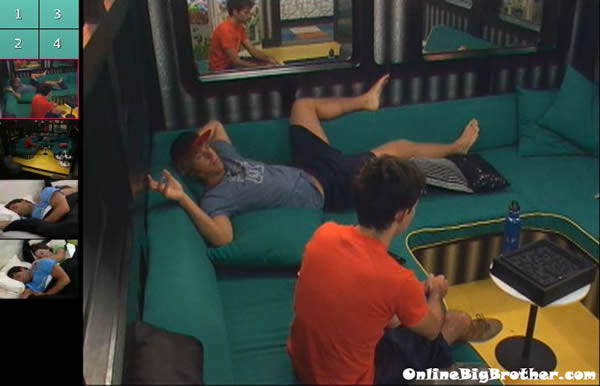 11:30am Big Brother ends the HOH lockdown. All of the house guests except for Shane and Danielle head down stairs. Frank and Ian are in the arcade room. Frank says that it definitely thinks they were setting something up outside. Boogie joins them and asks Ian, so no clues? Ian says no, I checked. Boogie says that they told him specifically that they would only be locked down for a couple hours.

Watch what happens, AS it happens: Big Brother 14 Live Feeds!

11:45pm – 12:15pm Joe heads up to the HOH room. Joe says so you are the only person that has not had a dream of winning this f***ing thing. F***ing get off your high horse. Frank you Mayberry piece of shit. You are a f***ing punk. Ian you loyal motha f**ker you were the first one to throw them under the bus when you saw them cheating. It took everything inside me to not go off on him. Joe talks about how Frank and Boogie were the first ones to celebrate and rub it in our faces. Now you are nice because your team is whipped. Shane says we didn’t make Ashley cry, she cried because she got caught in a lie. Joe says that he just wanted to vent. Shane tells him to use if for tomorrows competition. Joe leaves. Joe goes down and sits in the living room and tells Dan that what they did was so hypocritical. He says that he is even more mad now. He says that Ashley flips more than Barack Obama does on the issues. Dan says that 100% there will be a live eviction tonight guaranteed. Dan says that he is going to go talk to them upstairs. Joe then goes to the stereo room to tell Jenn how Dan says tonight there will be live eviction. Joe says that if we win we will put up Frank and Ian and if they win they will be putting up Dan and Shane. 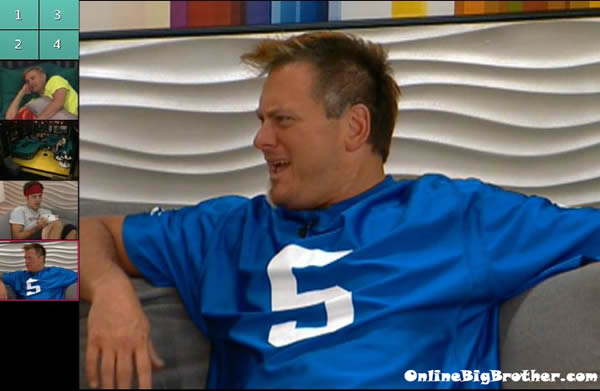 11:50am Dan joins Shane and Danielle up in the HOH room. Dan tells them that he really thinks tonight will be a live eviction. Danielle talks about how they were just trying to make us feel bad. They are such douche bags. Dan talks about how we can’t be seen with Ian right now. Dan talks about how Ian wants Frank to win HOH so that he doesn’t have to do the dirty work and he can let Frank knock us out. Ian doesn’t want to win HOH he has no motivation to win. They talk about how Ian doesn’t know that Joe is working with them or Jenn. Danielle says well he does now. Dan says that he thinks if they are on lock down again for a while then they will for sure be having a live show tonight. Dan says that if we win HOH we will put up Frank and Ashley or Frank and Ian. 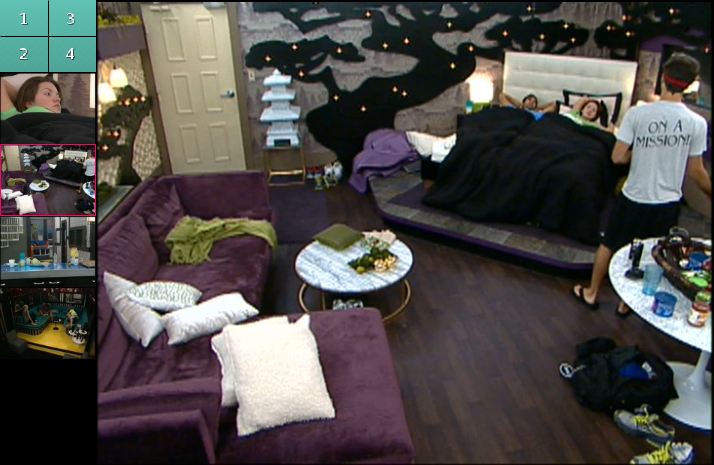 12:15pm Ashley and Frank are in the kicks room lying in bed talking. They talk about how Danielle said that she saw balls out in the backyard when they were on the lock down. Frank says that he didn’t see any balls in the backyard. They talk about how they don’t understand the strategy of the other side and how brainwashed they are. Frank and Ashley try and think up a plan to offer Dan a deal to try and get it so Boogie stays. They plan to go to Dan to get him to vote to keep Boogie, in exchange for a deal to keep Dan safe. Frank says that he think if it comes from him and he tells him that he is ready to squash the beef he has with him maybe it could work. Frank says that at least he is getting props for being so good and that maybe he will get the chance to come back for all stars. Frank jokes that if Dr. Will and Boogie came back too eventually he would have to send them home. 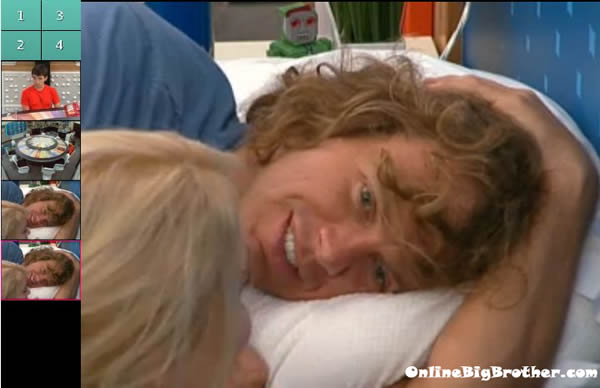 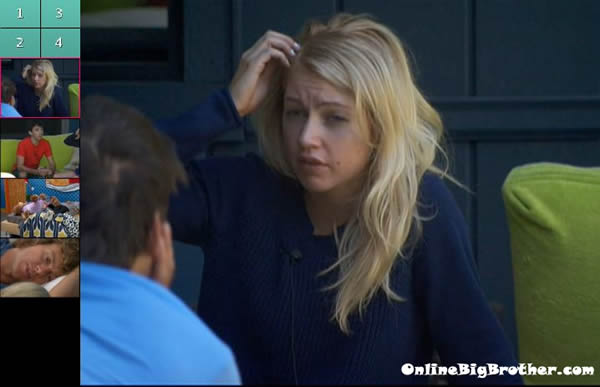 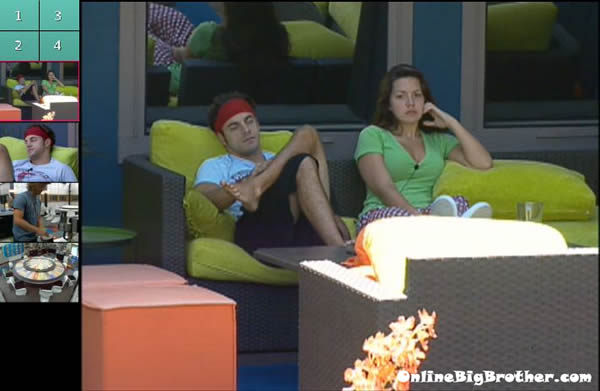 1:15pm – 1:20pm Dan heads up to the HOH room to talk to Shane. They talk about how Boogie & Jenn’s bags were in the storage room and that was weird. Shane says that if it will be a live show tonight or Double eviction tomorrow. Shane says that he thinks they were fixing the sliding glass door while they were locked up in the HOH rom. Shane says that it has to be a quiz tomorrow because we aren’t locked down yet. Shane wonders if Ian was playing them. Dan says he isn’t that smart. 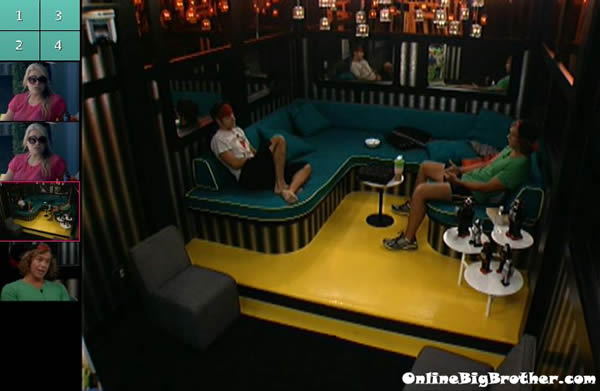 1:30pm Frank talks to Dan in the arcade room. Frank tells Dan that if he voted to save Mike we would not tell Ian or Ashley and then if we got HOH we would have them go after Shane and not you. Frank talks about how he knows having Mike and I in the game is a dangerous tandem but I think that we could all work together. Frank tells Dan that he knows that he and Mike would keep it a secret too. He says that it is better to have three votes for you than against you. Frank says that he just had to bring this to Dan to try and save Mike. Dan tells Frank that he can definitely hustle. Frank says that Mike has too much pride so that is why I am talking to you, but he definitely wants to talk to you. Dan says that he will always listen to people and that whatever happens he will always he here to talk to anyone. Dan says that he will never say anything personal about anyone. Ian walks in and Frank tells him that they need some time to smooth out the awkwardness. Ian leaves. 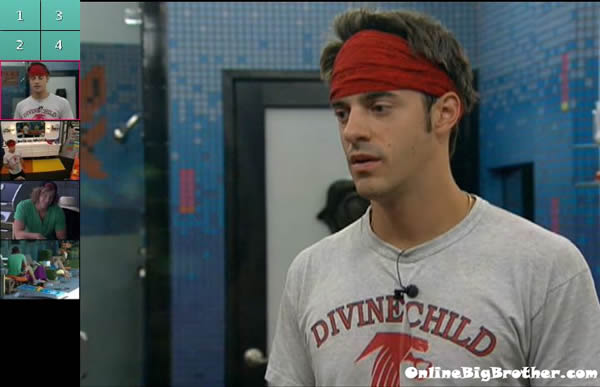 Out in the kitchen Britney starts freaking out about how Dan and Frank are in the arcade room together. Britney asks why are they in there, if Dan switches then I am screwed. Britney says that is sketchy as hell. Britney then goes to tell Danielle. Britney says two seconds after Dan tells Ian that we would put up Ian and Frank he runs into a room with Frank. Dan and Frank come out. Dan explains what the conversation was about how if he throws them a bone and gives Mike a vote and I would be safe next week. Britney is super sketched out about how he was in a closed room with him. Dan says what would you do if he wanted to talk to you? I will always talk to someone if they want to talk. There is just a level of trust that we need. Britney says that Frank knows we saw you go in there, so now he goes and tells Joe that you want to work with them. Dan leaves. Britney asks Danielle what she thinks of that. Danielle says that she believes him.

1:50pm Out in the backyard, Frank tells Ashley and Mike about his conversation with Dan. Frank laughs about how funny it would be to have a 6 – 2 vote to save Mike. He says that what if Jenn, Joe and Dan voted for you to stay, I would put them on blast … when after I win the HOH that is… 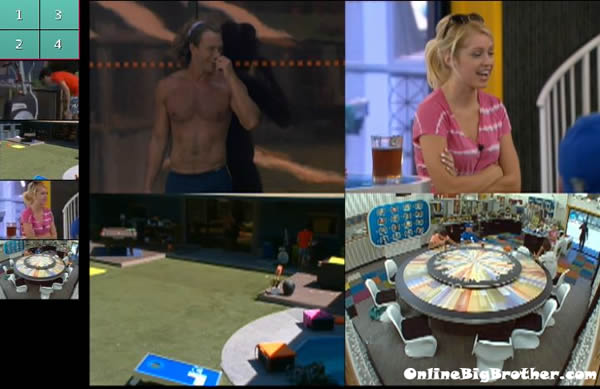 2pm – 2:25pm Shane, Dan and Joe are in the kitchen talking about random stuff and about the speech that Mike gave up in the HOH room. Joe is pissed off and fired up about it. They wonder how Frank and Boogie are getting edited. Dan starts asking Joe about his kids. Joe says that Levi is starting to learn that sometimes you have to fight for what you believe in and I am starting to fight! Meanwhile Frank is in the backyard working out.

2:40pm – 2:50pm In the kitchen Joe tells them that he is going to cook all the meat in this MO-FO! And then I am going to burn it down. They all laugh. Britney and Dan go into the arcade room and start playing around with the carnival game. Britney starts saying phrases to try and get it to start working. She says round ball, square box! Julie Chen said we could! I’m going to burn thing motha down! She loses patients and leaves the room. Britney heads out into the backyard and sits on the couch. Danielle wants her to talk trash about each of the house guests but Britney refuses too. Britney wants to talk about how working out is a “pyramid scheme.”