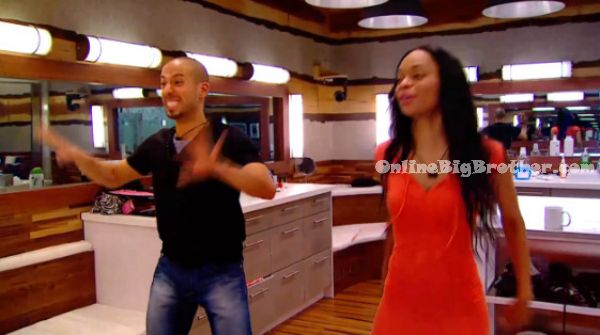 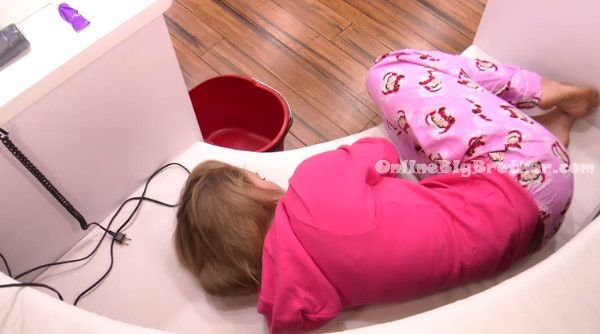 9:15am Big Brother wakes up the house guests. Arlie tells the house guests in the bedroom that Big Brother gave them jackets to wear in the hot tub area. He tells them that the jackets can’t be brought inside. Kenny and Jon head out to the hot tub room to check out the jackets. They realize that they’re not the jackets they brought in but jackets Big Brother bought for them. They head back inside. Jon asks What if it’s a plaid challenge? Kenny says maybe we can drowned Ika! You know what I mean. Jon comments how at first when he saw all the plaid jackets he thought wow everyone brought in a plaid jacket. Arlie, Andrew, Jon and Kenny are chatting on living room couches chatting. Arlie comments that girls diddle themselves to Kenny in magazines. Kenny says I hope so, that would be awesome! Kenny comments how he gave Ika the death stare when she came into the bedroom last night. Arlie asks what exactly what was the look. Kenny does his agry death stare. ANDREW says Ika’s not diddling her meat to that look! Kenny says she probably is “Hateful FEELINGS!” 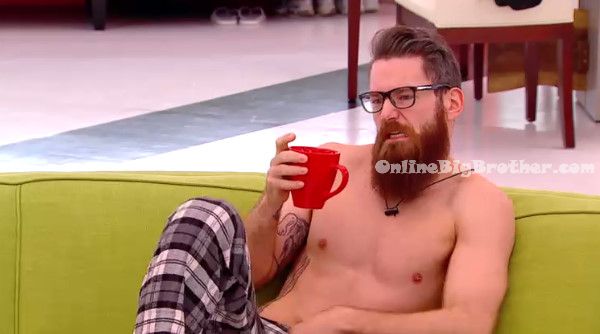 9:50am In the bedroom – Sarah tells Ika that I am not mad at you for her shredding their letters. Sarah says this is just human to human. Ika says and just so you know, when I was laughing it was more this is what you get for putting me up. I wasn’t laughing at your families.

10:25am In the kitchen – Andrew says that after last night I know I am definitely being portrayed as the villian. Rachelle talks about how they were all cast to be like past house guests. RACHELLE says “I know I am not like Jillian.. she was boring!” Andrew says I am not like Tom am I, Like really. I am not like him. They joke that Andrew was cast as the Gary of the season. JON starts touching himself and says I have a little tiny p*n!s this morning! A little baby p*n!s! 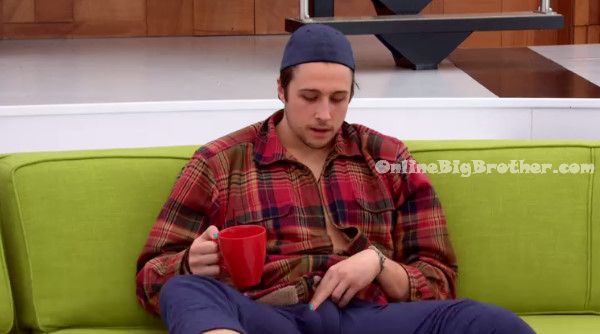 10:40am – 11am In the bathroom – Adel joins Ika in the bathroom. IKA says I am a Tsunami! Tsunami IKA COMING THROUGH! Adel says B***H you are a Tsunami! Ika tells Adel that she should give him a $1000. You should get paid just for hanging out with me. Adel says don’t say that, say that you’re kidding. Ika says oh yeah I am. Adel says you never know, you know. Ika tells Adel to keep fighting like Mike Tyson! Adel says I’m going to bite someone’s ear off! Ika says you’re Mike Tyson before the tattoo. Adel tells Ika that Neda came to him and told her how she’s f**ked. Adel tells Ika about how Neda said the girls ignored her when she showered in the HOH room. Ika tells ADEL that he’s like the plague. Adel says if they put her on the block, I am going to have to build a fort! Adel tells Ika that if Rachelle says anything to Ika to be spicy then tell her that she swore on her little brother that she wouldn’t put up a girl. Ika says the only thing that people can say about me is that I am a b***h! But at least I kept it real! Ika says I don’t care what they saw on the TV screen. I don’t care! Adel says most people would have shred those letters.

11am – 11:55am Out in the hot tub room – Andrew, Rachelle, Sabrina and Allison talk about Ika telling Andrew last night during the blow up fight that she didn’t want to eat his nose picking food. Rachelle comments that she picks her nose. Sabrina and Allison both say that they pick their nose too. Sabrina says I have a scab in my nose that’s been there since I was young. Andrew says he does too. Andrew says well maybe I will need to pay a little more attention to that.

I love adel for being a true person
Good job adel!!! Your representing yourself
In a great way!! Stay true

No Ratchild, you are Danielle – young & stupid, but nowhere near as entertaining.

One more girl this year

its so hard to watch sabrina tell allison and the house to ignore adel, or whoever else she doesn’t like, because they “owe” her for all the “things” she’s done. sabrina and rachelle are extremely boring and catty. how can sabrina always be so insecure yet flagrantly pick at herself and consistently wear crop tops?? nasty.

I hope now that the house is already ostracizing her for last night’s task, she should amp up the Tsunami IKA storm and call out Sobrina. Tell the whole house everything she said about them in a group so Sobs is put on the spot. She needs to take the heat of Jon and Neda and focus their attention on Sobs. Make her squirm!

Adel is like an undertaker. Once you get sent to Adel, you ain’t coming back.
Have her ready by Thursday, Adel.

I think its so funny that Ika took the money and shred there letters while they all watched. She got 5k, which is basically how much you would make if you were to make jury.

she will come out with the same amount of money, without having to waste 2 months of her life in jury while missing her family.

I just think its hilarious.

Ugh! While NerdHerd2.0 were out by hot tub, Allison tries to kiss Kenny’s ass by saying it was funny that he dropped a stinky shit in the bathroom and then leaves IKA in the wake in smell it. Uhhhh…he left your dumb ass in there to suffer through it as well, Allison. I can’t even…

Yeah, so far Allison sucks. She’s about as boring as Rachelle.

They are honest to Adel because he has no alliance. Think about it, you are more honest to people “weaker” than you because they can’t use the information against you. I don’t know. I don’t particularly like Adel, he is just floating (though he is better than Slobrina and people).

Maybe they feel like they can confide in Adel, because he is not an asshole. He seems like he is true to people he is friends with, whether they are going to be evicted or not. He doesn’t turn his back or ignore someone just because they aren’t in the booger club.

Sabrina…….I have a scab in my nose that has been there since I was young!!!……..yeah because you keep picking your nose! Dumbass!

Is there video of this big blow up after Ika won, where she tells Andrew she doesn’t want to eat his booger food?

No BB blocked the feeds while the fight happened. Hopefully they show most of it on the upcoming episodes.

what a season when the one I hated at first (Adel) is the one I hope wins HOH.

where can I read about Ika and this 5K/ tearing letters ?

I can’t imagine how big Andrew’s ego would be if he actually was good looking?

Ya ya scabs since childhood because they’ve been picking and prodding them for the last almost 20 years. Oh and sun poisoning gave Sabrina her Herpes sores.

Ika a skanky nasty …?? Why just because she is screwing those nasty boogies game? 🙂 whatever

That is great that Ika said that to Andrew. What is this the booger club? “I pick my nose too, so do I, and me too”. Fucking nasty ass people! They are like Natalie, who was referred to as Nastily on Big Brother U.S.. I do hope Ika keeps on bringing it. Go out with a bang!

Funny how Rachelle called Jillian boring, she has 100 x more personality than Rachelle will ever have..

Nothing would please me more than for Sobrina to be the one sitting alone in the corner because no one will go near her. This MUST happen at some point to make it worth having to endure her shit this season. PLEASE IKA, call her out in front of the house and get them against her. Even if the house is mad at IKA and Sobs tries to deflect it as lies, maybe these idiots will actually start comparing notes and putting it together that it is the truth. Nobody really has a need for her at this point and everyone is sick of her, so they can use this info to make her a scapecow to target instead of themselves in the future. Come on, IKA, do it! You have nothing to lose and so much to gain. I want this psycho to suffer. Allison’s only saving grace in this game was that her stupidity getting involved with Andrew made Sobrina suffer. Now Sobs needs to know how it feels to have the house against her…since she relishes so much in others having to go through it.

I really think Ika have done some damage to the house when feeds were cut. My guess is there have been fighting ..yay Ika 🙂

” Jon then says I can’t believe Andrew called her ( Ika) a f***ing whore. Sarah says all the things that she said about everybody where even exaggerated to how she really feels. ”
Lol yeah you’re right

“SABRINA ANDREW Rachelle Allison talking about nose picking” video:
Ugly Canadians. Such a sad thing, they are an embarrassment to bush plaid jackets.

Yes, I am so glad that at least Ika gets to see her kids and still have the amount that people get in jury (according to everyone else).

I gotta say, the producers def. know how to instigate a fight. They are all jealous that she got the money besides Neda, Adel, Arlie. Imagine she ends up staying. That would be the REAL twistos twist of the season.

that should really make the twist some interesting shit, like what they did to topaz. If they want to bring someone in they should just pick the person themselves because i never trust the voting…what if Canada gets it wrong!

As for Ika, it is kind of mean to rip up the hg’s letters but hell the producers can get them to just email them new letters! Also we wont know what happened until the show wd. and thursday.