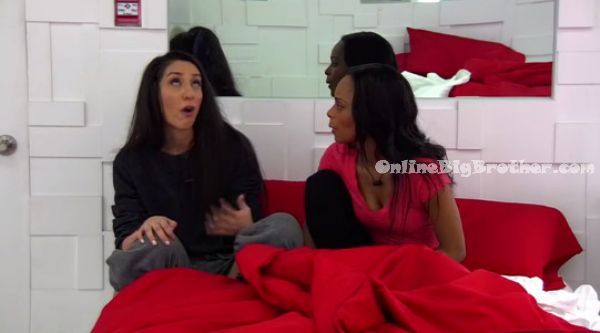 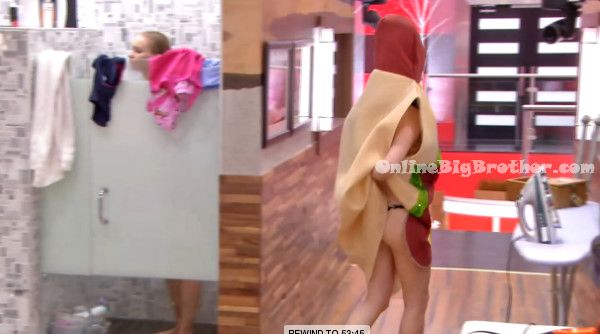 8am Big Brother wakes up the house guest. All of the house guests are slowly waking up and getting ready. The havenots are complaining about how cold their room was last night. In the main bedroom Ika talks to Allison. Ika asks her what’s happening. Allison says that she doesn’t know, no one tells me anything. Ika says come on now don’t lie to me. Allison says that she isn’t, no one told me anything. All they said to me was that someone is going up and you can infer the rest. I don’t know what that means. Meanwhile up in the HOH room – Rachelle, Sabrina and Neda are in the bathroom getting ready. Rachelle talks to Sabrina about how worried she is about putting up Ika and having Adel use his power. Sabrina tells her to have a talk with him and ask him. Rachelle goes to grab Adel and brings him up to the HOH room. Adel talks to Sabrina and Rachelle and tells them that he swears on his Quran that he will not use his veto power. Adel then leaves the HOH room. Rachelle says well he swore on it. Sabrina and Rachelle continue to do their makeup. After Adel finished getting dressed he comes back into the HOH room and tells Rachelle again that he swears on the Quran that he won’t use it. 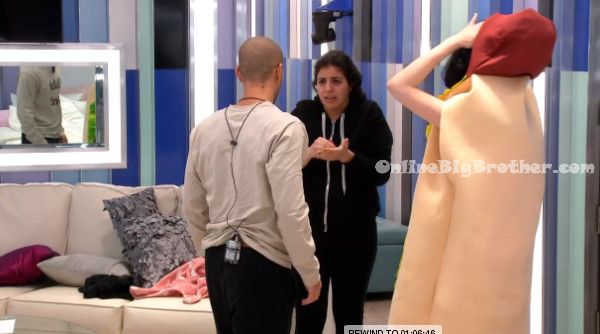 9:20am Neda asks Ika in the bathroom if she can talk to her. Neda and Ika head into the bedroom and Neda tells her that she really tried to change their minds but just couldn’t do it. Neda starts to cry. Ika says its okay, I already know that I am going home. Neda asks who put up their own alliance! Neda asks so Adel won’t use his power? Ika says I told him not to use it because if he did he would be the target next week. Ika says that she knows it was planned. When Allison won the veto, no one tried to take it from her. Neda apologize for not telling Ika saying it was so hard to not tell her yesterday. Ika says I already knew I was going then. Ika tells Neda that the guys are targeting Jon. Neda says she knows Jon will probably be going soon. She asks Ika to tell Jon that. Neda says I can’t because I am trying to lay low and can’t be seen spreading things. Ika says she’ll tell him Ika says she is not going to change her mind, I tried every single thing! 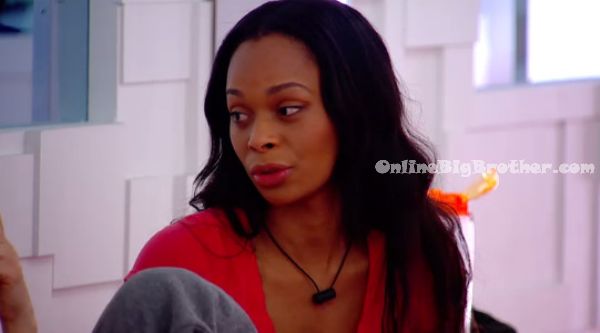 9:45am – 10am In the bedroom – Neda is talking to Jon about how he is a target of the guys. Jon comments on how he wants Andrew gone. Neda tells him that he needs to stop saying that to people. Jon says that he has since she talked to him about it. They talk about needing to get Andrew out before jury. Jon doesn’t believe that Kenny would turn on him.

10am – 10:25am Big Brother has blocked the live feeds for the Power Of Veto Ceremony to take place…

12:15pm The live feeds are back from the POV ceremony..

You can tell that Ika is a cold-hearted bitch. She knows her fate but there’s barely any emotion.

your intense hatred towards women is scary dude

Khron? Is it suppose to be Quran?

Ika you screwed up last week and now you are paying for it.
Rachelle the igiot will get hers from the same friend she trusted.

I wish I could get over my dislike of Sabrina, and route for her based on her game play. But I can’t . I wanna see that hateful heifer go down in flames.

The shit may hit the fan this week when JON and ARLIE ask ADEL to use his special power to backdoor ANDREW!!! During JON’s conversation with NEDA this morning, that is what they intend to do. This could get a little hot and heavy when ADEL can’t do this.

At least Ika knows the truth. It would have been bad if she thought he could save her. He may be able to come clean with Neda’s about his power now that he trusts her.

I hope people know that Adel lied about his power, the only power he has is that he can remove someone from playing in the Veto so he can play himself. That is his only power. He said he was going to lie about it and he did, so the rest of the guests think he has the power to remove someone from the block that isn’t true.

Well with Ika leaving I hope Neda wakes up and alligns herself with Adel and Heather and keep their plans secret. Why can’t Arlie see the benefit of keeping up Ika over Heather in terms of who would go after the bigs guys. I love Heather but the girl can’t win competitions and I feel like she can be easily swayed whereas Ika would fight with a vengeance.

most of these players throw rocks and hide their hands … what happen to players drawing a line in the sand pick a side and stick with it .. . ok lets use sabriana for example she swore up and down that she didnt instigate this hoh only the other two … I can only speak for me i can only side with players or individuals that are true to their character players that say what they mean and mean what they say … players like sabrina i have no respect for she throw rocks and hide her hand yet others say she is playing the game at what point do you leave your intergrity and morals and the door …. your word can only be true as your character ….

intergrity and morals at the door

Rachelle is so stupid. I really hope Adel and Ika call Sabrina out on all of her bullshit and lies. Why didn’t Adel threaten Rachelle (without Sabrina being there) that if she put up Ika, then he would take her off and put up Sabrina? Then Rachelle would have been scared and would have put up someone else.

Ika’s only chance is if Adel, Arlie, Neda, Jon, and Sarah vote to keep her and that is a long shot.

THE ROCK
Reply to  Jackson

Sarah?
The rat will stick with her boys until the end. Arlie has watch what he says to her

Sarah and Arlie are in the 5. Neither will break from that to save Ika.

Ika, blow up Sabrina’s game before you leave!!

Ika doesn’t know Sabrina’s game. She is aware that Sabrina is manipulative but does not make the connection to the guys and Sarah…yet. The only way she can blow it up is if that connection is made. Otherwise it has no oomph.

How many times does Ika have to say out loud that she doesn’t trust Sabrina and that Sabrina will never put up Andrew before she FINALLY gets it that she has been in an alliance with the boys. Did she really have to have Neda point out that she might be with them? How are all of these people so blind to it? As much as I wish that Ika will finally put it together and call her out and expose her this week since she has nothing to loose, I think my only hope is that when Ika gets evicted, they stick her in the war room and have her watch the feeds for a few days to see what’s really going on and then put her back in the house BBUK style. I know it’s highly unlikely, but a girl can dream.

That sounds like when they brought that guy in a dress back last year without sequestering him. Total bull. There’s no way someone should have an advantage like that when they already had their shot and missed.

Allison had a similar advantage and we see how well she used the information. (rolls eyes) I had high hopes for her…if she would just remove herself from Andrew’s nut sack and got into this secret Arlie alliance, they could take this game over. I wish she knew what Andrew says behind her back. She finally caught a glimpse of Sabrina’s hatred for her last night and is now a little wary of her, so hopefully that will open her eyes to the fact that cow is gunning for her and Andrew won’t protect her.

Anyway the comment about Ika going to war room was more of a joke that it would take her going to the war room and watching the feeds to finally connect the dots and call Sabrina out and expose her.

His name was Gary. He was “sequestered in the jury house” before he got brought back.

Sequestering the jury in the house happened due to BB3 where the jury was allowed to go home and watch BB on tv, which ended up influencing who eventually won.

Twist USA/CANADA style I do not mind as they are fair.
UK/Australia etc style is unfair due to the bias the BB teams shows. Can’t prove it, but suspects strongly these countries manipulate the final vote.

Or someone can throw a tennis ball into the hot tub area with this written on it: “How do you know when a cow is lying?…. Its lips are moooooooooooving!”

The thing about Sabrina’s game is that she doesn’t have one. Sabrina is just being Sabrina for her ’15 minutes of fame’. Won’t she pout when she realizes that she’s at the very bottom of all polls of Canadians. Not tweetworthy, not cute or funny, not nice, not smart, not coordinated, not loyal and certainly not pretty once you know her. Famous for picking her nose while cooking for the boys and then using the same fingers to taste the food she’s cooking. Who wants their make-up done by those hands? I can’t wait until she’s blindsided.